Abstract: We report the effect of multiple cylinders scattering of electromagnetic plane-wave on formation of high field intensity areas. Our model consists of three cylinders. One of them was basic and the possibility of the existence of high intensity field which can form in its vicinity has been studied. Two values of the radius for basic cylinder were considered: a resonant radius when the so-called whispering gallery modes formed, and non-resonant. It was found that a focal length of photonic nano jets generated at the shadow-side surface of basic cylinder increased (up to two times) compared to the case of a single cylinder. For whispering gallery modes the field intensity also increased up to two times.

Sub wavelength imaging can be defined as the ability to see details of the object having one or more dimensions smaller than the length of the wave with which the object interacts; while usually the minimum length scale on which a beam of light can operate is equal to half of its wavelength. The sub wavelength imaging has potential applications in biology, photo- and nanolithography, spectroscopy.

Sub wavelength imaging can be also considered as overcoming of so called diffraction limit. The latter appears because a general expansion of an EM field emanating from a source consists of both propagating waves and evanescent waves. Evanescent waves decay in the direction of propagation and are always lost, but because they corresponds to a high angular frequency components of the wave, which contain information about the small scale features of the object being imaged, this lead to the diffraction limit for focusing to an image. Different kind of optical microscopy technique has been developed [1-5] to make possible spectroscopic measurements having a spatial resolution below the diffraction limit. Principally new way to overcome the diffraction limit was discovered in Ref. [6] where the authors found and studied a narrow, high-intensity beam of light generated at the shadow-side surface of plane-wave-illuminated dielectric cylinders. At that the beam waists is much smaller than the wavelength and sub wavelength imaging becomes possible. Thereby one can see details of an object below the wavelength of visible light. Photonic nanojet could be formed also by spheres [7], multilayers cylinders [8], discs [9]. The influence of incident light polarization was investigated in [10]. It was shown that radially polarized light formed photonic nanojet with effective focal volume 10 times smaller than the circularly polarized light. Dielectric sphere with properly graded refractive index was used in [11] to increase the length of photonic nanojet. A nanojet generated by dielectric micro cylinders with different metallic coatings has been analyzed numerically in [12]. Adding truncated concentric rings to the cylinder increases the depth of focus to 1.18 of the wavelength [13]. Formation and transport of photonic nano jets for multiple cylinder scattering have been calculated in Ref. [14].

While photonic nanojet was recently discovered thanks to new computational capabilities, an existence of a region with high field intensity inside the cylinder due to the presence of whispering gallery modes (WGMs) is a well known and established fact [15, 16]. In Ref. [17] it was shown that WGM with the number 30 forms a focal spot outside the cylinder with width of 0.15λ (λ - wavelength) and maximum intensity to 1500 times greater than the intensity of incident light.

In the present paper we study how positions of the cylinders affect the formation of high field intensity areas. Our model consists of three cylinders. One of them is basic, in which and around which we consider the formation of high intensity field areas. The two other has assistive function. Their positions vary relative to the basic cylinder, with the aim to find the positions optimizing the characteristics of the scattered field.

Our model as well as distances and notations presented on Fig. 1. Plane wave falls from the left side on the group of three cylinders. The direction of wave propagation is along the axis of symmetry of the cylinders which selected as the x-axis. 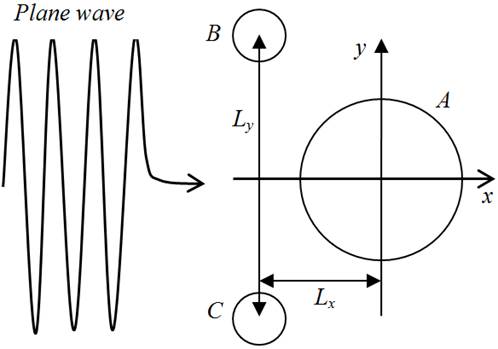 The origin of coordinates corresponds to the center of the main cylinder A.

The propagation and scattering of the electromagnetic plane wave was studied using MATLAB toolbox developed in Ref. [18]. The original formulation of the problem, as well as a system of wave equations for scattered and transmitted wave field is presented in [18]. The conditions of the equality on the boundary for the fields and their normal derivatives inside and outside the cylinder where used as boundary condition. Solution of the problem was found as Fourier series expansion. The accuracy of final results was controlled by number of terms in the expansion.

Whispering gallery modes can be treated as modes confined in dielectric cylinder due to the total internal or Bragg reflection. In order to calculate corresponding frequency we consider the expression for the electric field with TE polarization inside the cylinder in the form of an expansion in series with Bessel functions:

. Using well known properties of cylindrical functions [19] this expression can be rewritten as 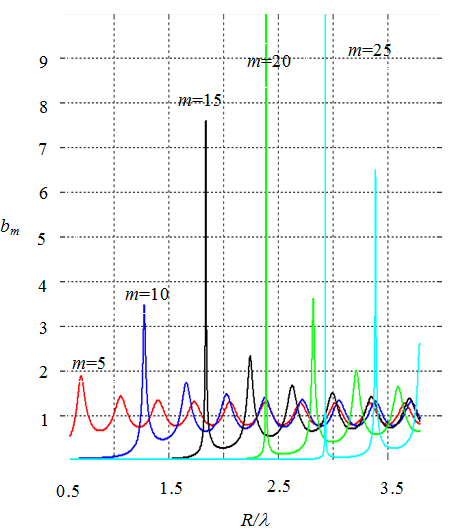 position of maximum bm(z) corresponds to zm. Then let us rewrite W performing the linear expansion of W near the value of zm:

Here, the expression for peak width is introduced

The calculated width for different m is shown in Fig. 3. 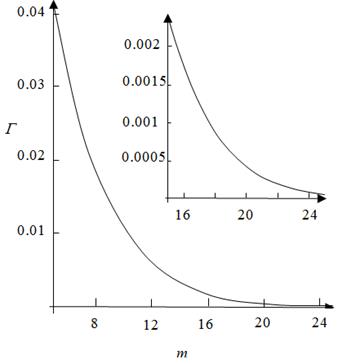 The half-width of the peak decreases as m increase, and reaches »0.000064 for m=25. Thus choosing the value of radius R corresponding to the maximum of bm(R/λ) with the largest m, we restrict the possible error in the selection of the radius for cylinder, because the deviation in the radius more than Γ leads to a sharp decrease in the contribution of corresponding mode. With this assuming we chose the radius of the cylinder corresponding to the maximum of bm with m=15. The value of Γ in this case is equal to 0.0024 (R/λ).

Consider now our model presented on Fig. 1. Cylinder’s A radius RA=1.84394λ provides the maximum of coefficient bm for m=15. The radii of the cylinders B and C are of 0.5RA. Changing the coordinates of centers of the cylinders B and C (i.e. the distances Lx and Ly), we tried to find the positions corresponding to the maximum field intensity around cylinder A. We found it for the values Lx= -0.9 μm, Ly=2.5 μm. The comparative picture for the case of single cylinder A and our model is shown in Fig. 4. It is seen that the maximum value of the field in our model is greater approximately in 1.5 times (respectively, intensity – in 2.25 times).

The location of the focus near the surface means that it is formed mainly by surface wave, which is in this case a standing surface wave formed by the interference of two same WGMs, "running" toward each other along the cylinder surface in counterclockwise and clockwise directions.

Fig. 4. Intensity distribution of electromagnetic wave scattered by one (a) and three (b) dielectric cylinders. Larger cylinder have resonant radius RA=1.84394 λ.

Also as indicated in [17], as the resonant radius increase WGM extends along a less curved surface, and therefore, energy flows out of the cylinder less. Thus, the energy of the WGM stored within the cylinder increases with its radius. This energy is distributed between the petals of the WGM, one of which forms the focus.

The case of non-resonant radius is an interesting and important by next reasons: it is not necessary to match the radius of the cylinder, especially with high precision; it is possible to form a photonic nanojet outside of the cylinder. First, we obtained a picture for one cylinder of radius RA=2λ. It demonstrates the formed nanojet. Next we used the additional cylinders B and C with radii RB = RC = 0.5 RA. Changing the position of the coordinates of centers of cylinders B and C (i.e. the distances Lx and Ly), we tried to find a positions corresponding to the maximum extension of the photonic jet in the region x>RA. The length of nanojet Lext was calculated as the distance along the x axis from the surface of the cylinder to the point of half intensity. 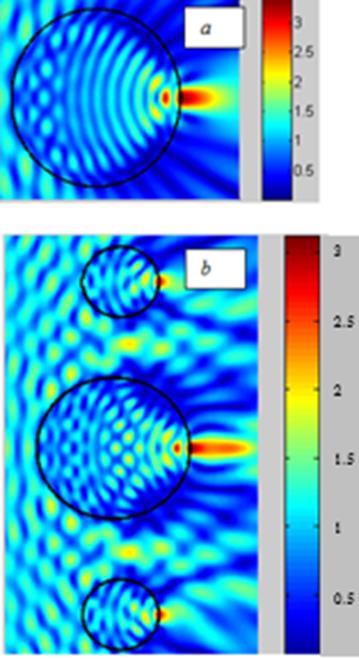 Fig. 5. Intensity distribution of electromagnetic wave scattered by one (a) and three (b) dielectric cylinders. Larger cylinder have resonant radius RA=2 λ.

The comparative picture for the case of one cylinder and of our model when Lx =1, Ly =2 is shown in Fig. 5. It is seen that the extension of the nanojet in our model is greater at about 2 times. Fig. 6 shows the dependence of length of nanojet Lext and distance Ly versus the position of the cylinders B and C along the x axis. At that the Ly corresponds to the calculated Lext at the same position on the x axis (Lx value).

In conclusion, we have simulated scattering of plane wave by group of three cylinders. One of them was basic and the possibility of the existence of high intensity field in its vicinity has been studied. The radii of the cylinders A and B were chosen as RB=RC=0.5RA. Two values of the radius for cylinder A were considered: a resonant radius when the so-called WGMs can be formed, and non-resonant. The presence of cylinders B and C lead to increase of absolute value of the field in 1.5 times (as intensity maximum - in 2.25 times) for the resonant case. For the nonresonant case it was found that significant increase of nanojet length, as compared to the case of a single cylinder, occur if the centers of the cylinders are located near a plane perpendicular to the direction of the incident wave.

The present work demonstrates the ability to optimize the areas of high intensity field by multiple cylinders scattering, as well as further potential of this optimization by increasing the numbers of cylinder, their position, size, and physical characteristics. 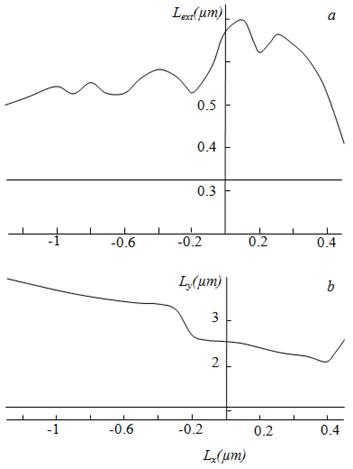 Fig. 6. Extension of nanojet Lext (a) and distance Ly between cylinders B and C (b) versus position of cylinders B and C along x axis. Horizontal line: (a) – value of Lext for cylinder A with R=2λ; (b) – Ly=RA.