Abstract: The nonlinear optical properties of Orange G dye in water at different concentrations and in a solid polymer film have been investigated using a single-beam z-scan technique. Experiments were performed using continuous wave (CW) laser operating at 532 nm wavelength as a source of excitation. Effect of different incident intensities on the nonlinear optical properties of Orange G dye was studied. The open aperture z-scan curves revealed that both the dye solution in water and dye doped polymer film exhibited reverse saturable absorption. While the closed aperture z-scan curves of the dye displayed negative nonlinear refraction (self-defocusing effect). The results showed that the Orange G dye exhibited large values of the nonlinear optical coefficients β, n2, and χ(3) of the order of 10-3 cm / W, 10-7 cm2 / W, and 10-5 (esu), respectively. Our results suggest that the Orange G dye is a good candidate material for applications in nonlinear optical devices.

Nonlinear optical properties of materials have been the subject of numerous investigations ranging from theoretical and experimental points of views during recent years due to possible potential applications in optical signal processing, computing, and photonic devices [1,2].

Azo dyes exhibiting nonlinear absorption and refraction are currently of interest because of their large third-order nonlinearities, good photo-thermal stability, dissolvability and easy preparation virtue, so they can be used as a kind of novel storage media [3-5]. The nonlinear optical materials exhibiting a large third-order optical nonlinearity are in great demand because of their functional applications in optical power limiting, optical switching, optical data storage, micro-fabrication, and optical phase conjugate [6-17].

The chemical structure and the molecular formula of Orange G dye are shown in Fig. 1. PVA polymer with molecular weight of 72000 g / mole (provided by BDH chemicals England) was chosen for the matrix material owing to its good optical transparency, high laser damage threshold, ease of handling, and high water solubility [28]. The Orange G dye solution was prepared by dissolving the dye powder in water as a solvent. Five dye concentrations were prepared, these are: 0.50 mM, 0.75 mM, 1.25 mM, 2.00 mM, and 2.75 mM. The dye-doped polymer film was prepared as follows: 20 gm of PVA powder was dissolved in 100 ml of distilled water at 90°C under magnetic stirring for four hours, followed by cooling the mixture to room temperature with continuous stirring for another two hours. Then, Orange G dye was dissolved in distilled water at room temperature with continuous stirring for one hour. After that the two solutions of the dye and the PVA polymer were mixed together. The mixture was filtered and then stirred at room temperature for one hour. This mixture was poured on a thin glass slide and left to dry at room temperature for two days. The concentration of the prepared polymer film was 0.50 mM. 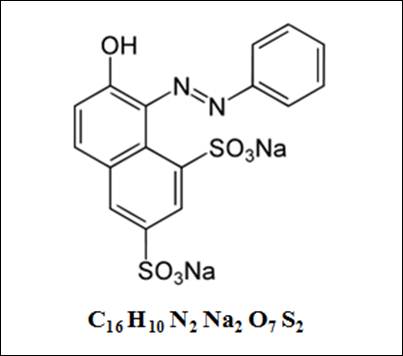 The UV-Vis (Ultraviolet-Visible) absorption spectra of the dye solution at four different concentrations(0.50, 0.75, 1.25, and 2.00 mM) were recorded using double-beam spectrophotometer (Cecil Model CE-7500) of the wavelength range 190-1100 nm, as shown in Fig. 2. All the measured optical absorption spectra of the Orange G dye show broad peaks centered at about 487.5 nm and transmission cut-off around 540 nm. 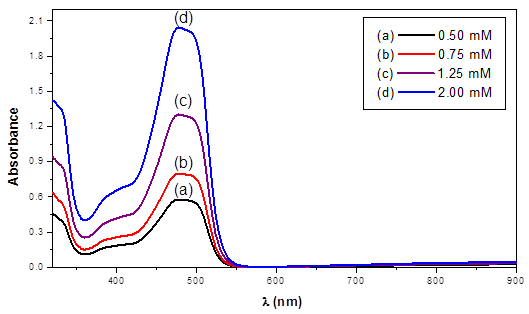 The nonlinear response of the Orange G dye for the incident laser beam was characterized by using the z-scan technique with continuous solid-state laser at wavelength 532 nm, as an excitation source. The Gaussian beam of the laser was focused to produce a beam waist ωo of 24 μm, using converging lens of 5 cm focal length. Accordingly, Rayleigh length (zo) was calculated to be 2.76 mm, is much larger than either the thickness of the dye doped polymer film sample or the quartz cell (1 mm thickness) containing the dye solution. The experimental setup is shown in Fig. 3. The experiment for investigating the nonlinear optical properties of the Orange G dye, using the z-scan technique, was done by moving the cell containing the dye solution through the focal point (z = 0) along the propagation of the laser beam (z-axis direction). The open and closed aperture configurations are used for measuring nonlinear absorption and refraction of the medium, respectively. For closed aperture measurements, the transmission of the beam laser through an aperture was measured as a function of the sample position along the z-direction using a photo detector PD1 fed to a digital meter. The aperture (with S = 0.5), was placed in front of the photo detector PD2 at the far field. For the open aperture measurements, a converging lens was used to collect the entire laser beam transmitted from the sample. To study the effect of the laser incident intensity (Io) on the nonlinear optical properties of the sample, we varied the value of the incident intensity, three values were chosen, 1.10, 1.65, and 2.20 kW / cm2. These values are much smaller than the damage threshold of the prepared samples. The measurements of the open and closed aperture were repeated for the dye-doped PVA polymer film at the concentration of 0.50 mM for the same values of incident intensities.

Fig. 3. Schematic diagram of the experimental arrangement for the z-scan measurements.

The normalized open aperture z-scan curves for the Orange G dye solution at different concentrations and polymer film at 0.50 mM concentration, for different incident intensities (I0), are shown in Figs. 4 and 5, respectively. It is obviously seen in this figure that the laser beam intensity (transmittance) decreases to reach the minimum value at the focus (z = 0) (valley position) as the sample is moved towards the focus (from –z to +z). This behavior indicates that the sample exhibits reverse saturable absorption (RSA) process [29], and suggests that the nonlinear absorption coefficient (β) is positive. The physical explanation of the reverse saturable absorption (RSA) behavior is attributed to that the absorption of excited states is larger than that of the ground states and the molecules of ground and excited states absorb the incident photons of the same wavelength [30]. Such RSA has been observed to occur in organic materials especially in π-conjugate materials [31]. However, if the mechanism of the nonlinear absorption (NLA) is due to pure two-photon absorption (TPA) process, then the values of nonlinear absorption coefficient β should be independent of on-axis input intensity I0 [32]. But from Fig. 8, it is seen clearly that the value of β increases with an increase in intensity I0. This means that the mechanism of NLA is not due to TPA process alone, but there are addition mechanisms such as excited state absorption (ESA), nonlinear scattering, or with the combination of these processes [32]. These findings suggest that ESA, as a high order effect, is accessed via two-photon absorption in contributing to NLA [33].

On the other hand, the normalized closed aperture z-scan curves of orange G dye solution at different concentrations and polymer film at 0.50 mM concentration, for different incident intensities (I0), are illustrated in Figs. 6 and 7. For all samples, the curves exhibit a pre-focal transmittance maximum (peak) followed by a post-focal transmittance minimum (valley). This behavior (peak followed by a valley) indicates that the sign of the nonlinear refractive index n2 is negative, exhibiting self-defocusing effect. The physical origin of the self-defocusing property is due to the local variation of the refractive index with temperature. 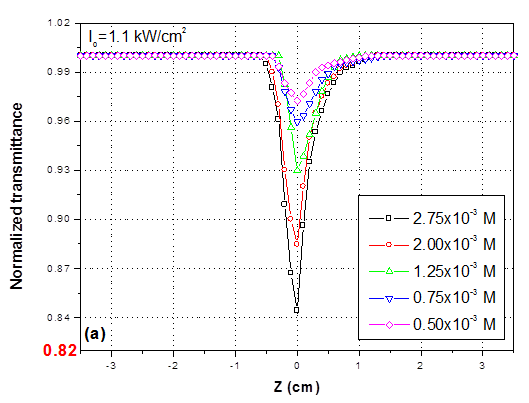 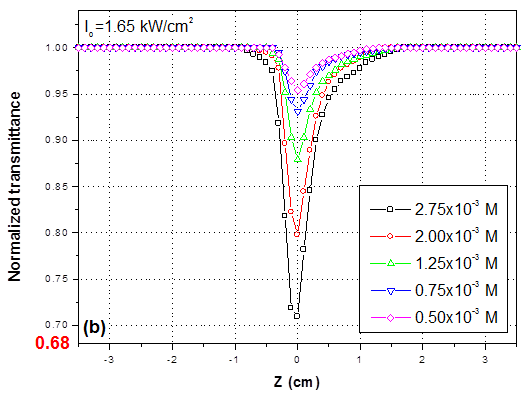 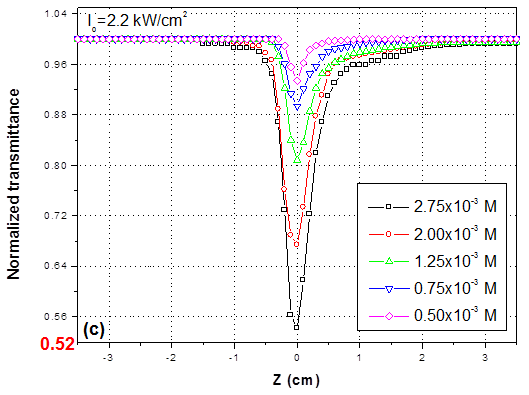 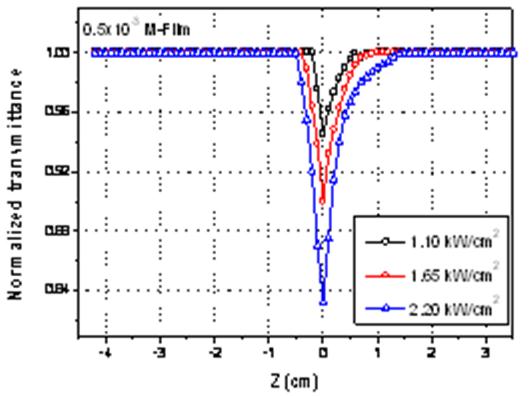 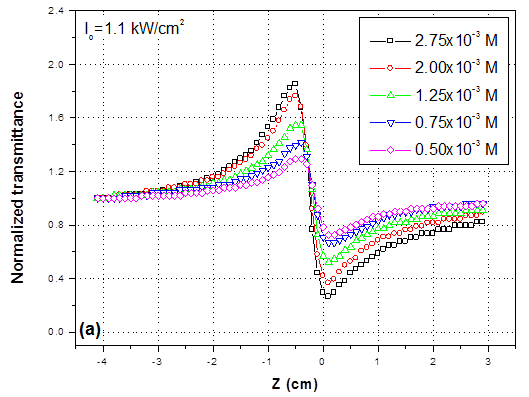 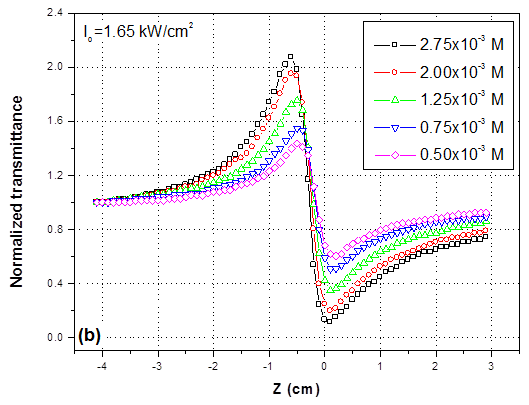 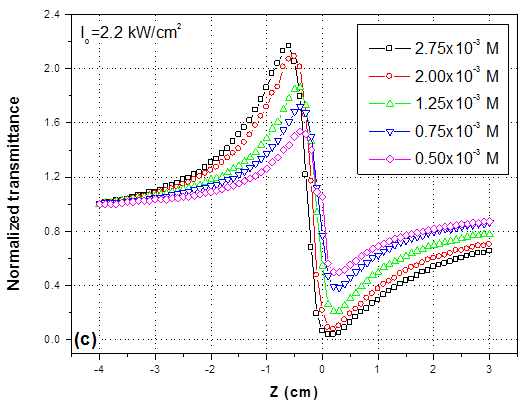 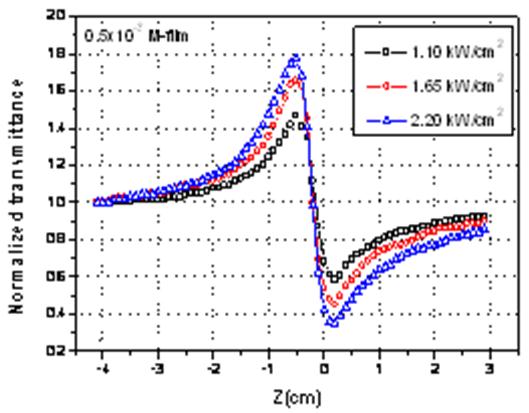 is the permittivity of free space, c is the speed of light in vacuum, and

is the linear refractive index of the sample.The two parameters

is the normalized transmittance of the sample at position z,

is the on-axis phase shift at the focus, Io is the intensity of the laser beam at focus z = 0, and k is the wave number given by k = 2π/λ; where λ is the wavelength of the light used.

is the linear absorption coefficient.

, at the focus suffered by the beam traversing the medium is related to the peak-valley transmission difference (closed aperture z-scan data),

is the aperture linear transmittance, with

is the beam radius at the aperture. ΔTp-v = Tp- Tv, where Tp and Tv are the normalized peak and valley transmittances, respectively.

In Fig. 8, we plotted the nonlinear parameters β,

as a function of the Orange G dye concentration for different incident intensities (I0). We can see from this figure that the values of these parameters are increased when the concentration increases. This may be due to the fact that, as the number of dye molecules increases, when concentration increases, more particles are thermally agitated resulting in an enhanced effect [35]. The optical nonlinearity of the dye is likely to be of thermal origin arising from the temperature dependence of refraction index of sample which acts a thermal lens. A laser beam, while passing through an absorbing media, induces temperature and density gradients that change the refraction index profile. This intensity-induced localized change in the refractive index results in a lensing effect on the optical beam [36, 37]. We also plotted in Fig. 9, the nonlinear parameters β,

of the Orange G dye solution and dye doped polymer film, at concentration of 0.50 mM, as a function of incident intensity (I0). 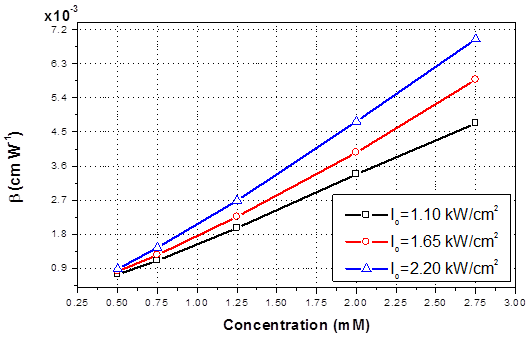 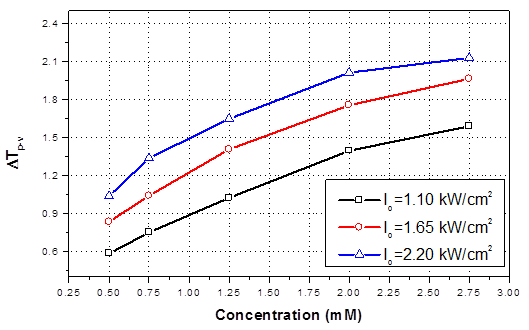 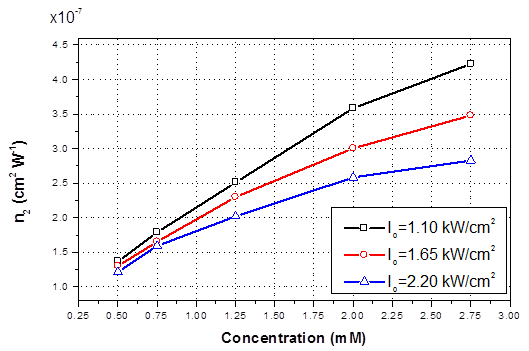 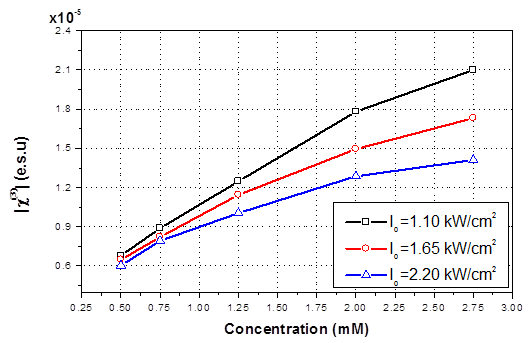 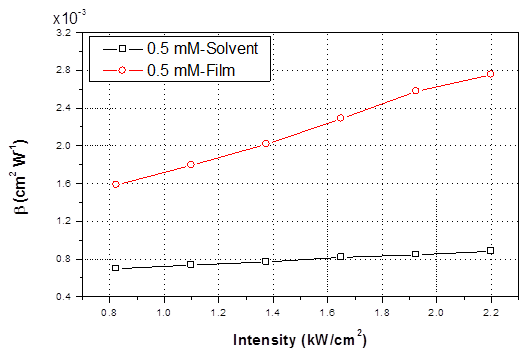 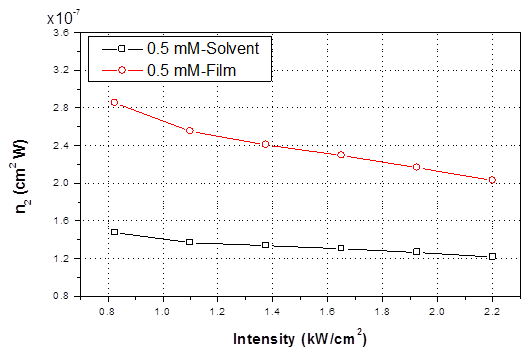 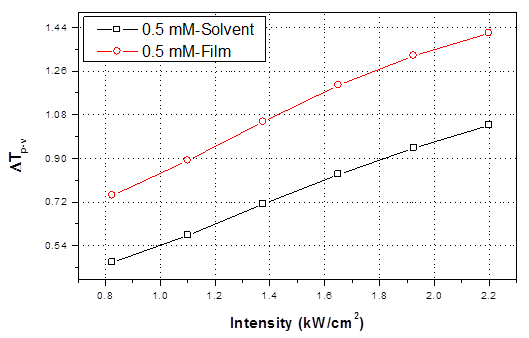 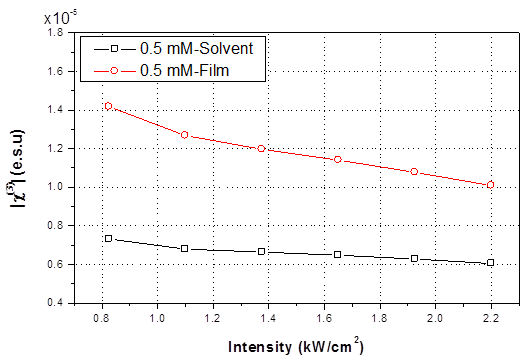 In comparison, the values of

is larger than that of imaginary part

. This result, confirms that the nonlinear refraction (NLR) plays a significant role in the third-order nonlinear response for all samples. On the other hand, from Figs. 8 and 9, it is seen clearly that when the incident intensity increases the values of

and βincrease also, while the values of n2 and

The third-order nonlinear optical parameters of Orange G dye were determined by z-scan technique with a CW laser at the wavelength of 532 nm for different incident intensities. For all samples (solution and polymer film), open aperture z-scan measurements indicated that the dye exhibited reverse saturable absorption process. While the closed aperture z-scan experiments showed peak-valley signature and it is suggested that the sign of the nonlinear refractive index is negative and the thermal self-defocusing is the most probable mechanism of nonlinearities in these samples. The values of the nonlinear optical coefficients β, n2, and χ(3) were obtained and noticed that these values increased with increasing the concentration of the dye in water solution. It is also noticed that when the incident intensity increases, the nonlinear absorption coefficient (β) increases while the nonlinear refractive index (n2) decreases. In comparison, we observed that the values of β, ΔTp_v, n2, and χ(3) for the dye doped polymer films are larger than that of the dye solutions. Our study showed that the samples exhibiting large third-order nonlinear optical parameter values. The determined values of the parameters β, n2, and χ(3) are of the order of 10-3 cm / W, 10-7 cm2 / W, and 10-5 (esu), respectively. Our results suggest that the Orange G dye can be considered as one of the promising candidate materials and can be effectively used for designing optical nonlinear devices.