Abstract: Endogenous á-amylase inhibitors exist widely in animals, plants and microorganisms. These inhibitors show remarkable structure variety with different modes of inhibition and specificity against different á-amylases. To explore the alpha-amylase inhibitors in wild amaranth, a novel proteinaceous inhibitor of á-amylase, named WAI-1, was purified and its structure and function were investigated in this study. WAI-1 was one of the smallest proteinaceous inhibitors with a molecular weight of 986.5 Da. The structural analysis exposed that WAI-1 was a cyclic nonapeptide of nine amino acids, with pyroglutamate as the N-terminal. The hydrolysis in hydrochloric acid solution opened the loop of the side chain of WAI-1 at the N-terminal, but did not affect its inhibitory activity. However, the hydrolysis by trypsin disconnected arginine at the c-terminal, causing almost a full loss of its inhibitory activity. WAI-1 had good heat stability and specific inhibitory activity against á-amylases of the insects. The integrity of the molecular loop structure of WAI-1 was critical for its stability and inhibitory activity.

Endogenous α-amylase inhibitors exist widely in animals, plants and microorganisms [1]. Proteinaceous α-amylase inhibitor combines with certain enzyme to form inactive enzyme-inhibitor complexes [2]. In plants, proteinaceous α-amylase inhibitor can act as a kind of insect-resistance gene by reducing the digestibility of insects, so its transgenic over-expression or ectopic expression may help enhance the yield of crops [3]. Such inhibitor also has many potential applications in medicine [4], which may reduce the breakdown of polysaccharide, and be helpful to prevent some diseases such as diabetes, hyperlipidemia and obesity. Endogenous α-amylase inhibitor has been studied for over 70 years, even dating back to 1933 when Chrzaszcz and Janicki isolated proteinaceous amylase inhibitor from wheat [5]. A large number of reports, so far, related with α-amylase inhibitor in several plant species,such as cowpea (Vigna unguiculata)[7], pigeonpea (Cajanus cajan)[1], sorghum (sorghum bicolor (L.) Moench ) [8], Barley (Hordeum vulgare) [9], Rye (Secale cereale) [10], rice (Oryza sativa)[11], bean (Phaseolus vulgaris) [12], [13] , amaranth (Amaranthus hypocondriacus)[14], tepary bean (Phaseolus acutifolius A. Gray) [15], maize (Zea mays) [16], and ragi (Eleusinecoracana) [17]. These inhibitors showed remarkable structure variety with different modes of inhibition and different specificity profiles against various α-amylases.

In this study, we tried to isolate certain proteinaceous α-amylase inhibitor from the seeds of wild amaranth (Amaranthus paniculatus) and determine the primary structure and the corresponding function. This work could broaden our knowledge of α-amylases inhibitor and provide the basis for further study on reaction mechanisms of α-amylase inhibition. The inhibitor found in this study, WAI-1, could provide a potential tool for creating new insect-resistant transgenic crops and human medicine.

Various wild species of amaranth are saddled with the label pigweed, particularly in North America, and several of those now feature on the list of the world’s weeds that have developed a resistance to glyphosate. The wild amaranth is generally not useful as human food or animal feed for not producing nutritious leaves or seeds except pig to our knowledge [14], which indicates that certain factors disturb its digestion in the digestive system of many animals. A compound, WAI-1, was isolated and purified by RP-HPLC, and then the inhibitory activity of the purified WAI-1 was analyzed against various α-amylases.

As we know, different inhibitors have different specificity against diverse α-amylases. WAI-1 did not inhibit pig pancreas α-amylase, human saliva amylase, the α-amylases of Bacillus subtilis and Aspergillus oryzae (Table 1). The inhibitory activity of WAI-1 of the same amount against α-amylase was stronger in amaranth than in Tenebrio molito. It might induce an impression that WAI-1 had no inhibitory activity on mammals or microbes, only functioning on insects with different activities. Such inhibition specificity has aroused interest in their inhibition mechanisms and potential applications. WAI-1, which specifically inhibits insect α-amylases, may be used to play a role in preventing insect for crop. 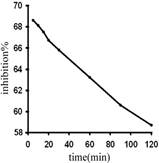 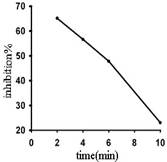 Cys or disulfide bond was not found through reductive alkylation in WAI-1. Compared to the standard amino acid analysis graph, WAI-1 contained a series of amino acids including G, R, V, A, P, and L. It was revealed that WAI-1 also contains indole loops, and Trp was also detected in WAI-1. After WAI-1 was hydrolyzed in 1 mol/L HCl, its molecular weight was added 18 determined by mass spectrometry, and Edman degradation gave an obvious signal of Glu, indicating that the N-terminal residue of WAI-1 was pyroglutamate. Other amino acids present include L, V, R, and G. The overall information demonstrated that WAI-1 was a type of loop-containing protein. The amino acid component connected to the C-terminal residue was glycine (Gly). In addition, a branching structure existed projecting from the Gly. The results of tandem MS analysis on enzymolysis of WAI-1 were listed in three sections. There was an Arg in WAI-1, while a special amino acid residue was decided adjacent to the Arg, with its molecular weight of 98 Da. Moreover, a Val was next to this special amino acid, and a Leu next to Val was determined. Finally, according to previous analysis of the structure, WAI-1 consisted of pyroglutamate, W, L, V, R, G, P, A and a special amino acid. The N-terminal residue was pyroglutamate, indicating that WAI-1 had a special dual-loop structure (Figure 2). 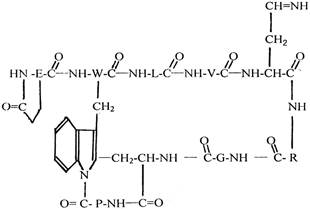 Remarkable structure variety is essential to different specificity. We performed a preliminary analysis of the structure of WAI-1 by using multiple approaches. When the N-terminal of peptide is contained within a blocked loop, several methods of cleavage were applied before sequencing the N-terminal region. The dynamic changing process of the hydrolysis of WAI-1 in HCl solution was presented in Figure 3. The molecular weight of this product was 1005.5 Da (Fig.4), which presumed to be derived from the open-loop of the side chain of WAI-1 at the N-terminal. This product could exert inhibitory activity on α-amylases from Periplaneta Americana digestive tract, and its activity was commensurate to that of WAI-1 [18]. Thus, the open-loop conformation of the side chain at the N-terminal would not cause a significant decrease in inhibitory activity. These assays indicated that WAI-1 is a polypeptide of low molecular weight with complex cyclic structure. The open-loop configuration of the side branch of WAI-1 did not influence inhibitory activity.

WAI-1 was completely hydrolyzed for 25 h in trypsin and no other by-products appeared. The molecular weight of the hydrolysate was 1005.5 Da, same as the hydrolysate by HCl solution, which had no inhibitory activity against α-amylases from Periplaneta Americana digestive tract(Table 2), indicating that the loop-like molecular structure is essential for the inhibitory activity of WAI-1 against certain α-amylases. 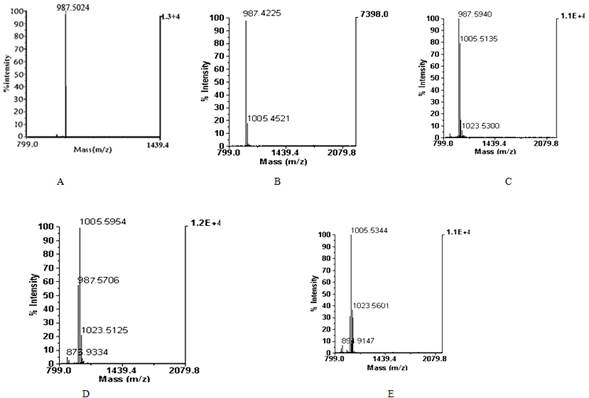 Fig. 3. Dynamic changing process of the hydrolysis of WAI-1 in 6mol/L HCl. 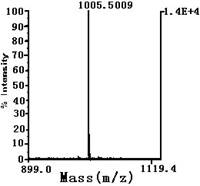 Fig. 4. MALDI-TOF mass spectrum of the hydrolysate of WAI-1.

Table 2. Results of specificity of the hydrolysate of WAI-1.

As a proteinaceous α-amylases inhibitor, WAI-1 would be a potential tool for creating new insect-resistant transgenic crops and human medicine. The research also provided the basis for further study on reaction mechanisms of α-amylase inhibition.

The seeds of wild amaranth (Amaranthus paniculatus) were collected. Proteinaceous substance, named WAI-1, was isolated and purified according to the methods described by Wang et al 18.

The activity of WAI-1 was compared when functioned with α-amylase in American and local cockroach digestive tract, Tenebrio molitor digestive tract, swine pancreas, Bacillus subtilis, Aspergillus oryzae and human saliva at same dose and by the same methods as above.

Samples of around 3μg WAI-1 was waterbathed at 80°C and 100°C for different time, and incubated at pH 6.0 and 37°C for exactly 20 minutes. The inhibitory activity was determined by modified Bernfeld method [19, 20].

The primary structure of WAI -1, including amino acid composition, was mainly determined by Edman degradation [21, 22] and tandem mass spectrometry [23].

Cysteine (Cys) and/or disulfide bonds in WAI-1 were first assayed by reductive alkylation. The amino acid composition of WAI-1 was identified through multiple analytical methods. The inhibitor WAI-1 was hydrolyzed in trypsin prior to fragment identification by mass spectrometry (MS). Peptide fragments were then sequenced through Edman degradation. The tandem MS analysis of the product after enzymolysis was performed. In addition, after WAI-1 was treated with 1 mol/L HCl at 60°C for 4 hours according to the method described by Hashimoto T et al[24], the hydrolysate was subjected to MS analysis followed by Edman degradation and sequencing. Tryptophan (Trp) in WAI-1 was determined by the hydrolysis of WAI-1 in 5 mol/L NaOH. The indole loop was determined by the hydrolysis of WAI-1 in 5.7mol/L HCl.