Abstract: For their biological importance, leaves from two foliage Ficus benjamina (F. benjamina) trees "90 and 120 days old" growing two meters close to each other were investigated and compared for their physiological and chemical content in response to environmental factors of El-Ahassa, Saudi Arabia. Mineral composition (Ca, Fe, K, Cu, Si and Zn), total phenols, flavonoids, tartaric esters and anthocyanins were quantified. Photosynthetic pigments (chlorophyll a & b and carotenoids), superoxide dismutase (SOD) and catalase (CAT) were analyzed. Besides, their chemical profile was screened using gas chromatography–mass spectrometry (GC-MS) technique. Our data showed an increased Ca, Fe and Zn content in leaves of younger trees and an increased K and Si in leaves of older ones. The Cu content was insignificantly higher in older trees. Total phenols, flavonoids, tartaric esters and anthocyanins of methanol-extracts were generally higher in 90 d compared to 120 d old trees. The photosynthetic pigments were higher in older tree whereas CAT and SOD were higher in younger trees. The GC-MS analysis identified similar chemical profile in both trees, although the concentration of some organic compounds has increased in the crude ethyl acetate-extract from 120d trees compared to 90d trees. Some of these compounds: glycerol 1, 2-diacetate, 1, 2, 3-propanetriol, 1, 2-diacetate, 1, 1, 2-Triacetoxyethane, phenol, 2, 4-bis (1, 1-dimethylene), pentanoic acid and others. We concluded that one month difference in age between two F. benjamina trees was a factor causing spectacular physiological and chemical changes. We also presume the high biological activity of 90 d fig trees compared to 120 d trees.

Ficus benjamina (F. benjamina) is a spreading tree in different parts of the world including Australia, America, Asia and some european countries [1]. For its therapeutic effects, it has long been used in folk medicine for treatments of many diseases, such as influenza and dysentery, malaria and other respiratory track diseases [2, 3]. Leaf extracts of F. benjamina tree showed richness of bioactive chemical compounds like cinnamic acid, naringenin, and quercetin lactose. The fruit contains caffeic acid, the bark contains stigmasterol [4], whereas the bark of roots encompasses benjaminamide. In addition, chloroform extract was rich with serrat-3-one, pentacontanyl decanoic, friedeline, β-sitosterol. Flavonoids, including quercetin 3-O-rutinoside, kaempherol 3-O-rutinoside and 3-Okaempherol robinobioside were also isolated from the chloroform extract. From the literature, the fruit extract of F. benjamina was antitumor and antibacterial in activity, while the leaves extract showed antiviral and analgestic activities.

The micronutrients group encloses Fe, Cu and Zn, are elements known as essential for plants life under low to moderate concentrations [5].

Copper is found in six sites in the plant cell: apoplast, endoplasmic reticulum, chloroplast, cytosol, mitochondria and thylakoid lumen [6]. Copper is needed in small concentrations for plants growth, as it became toxic above beneficial range and deficiency occurred below that range. It also found in multiple oxidation state [7].

However, copper and iron are important cofactors and contribute with important physiological processes in plants e.g. photosynthesis [8]. Copper transport in plants in complex forms as discovered in tomato plants that more than 99% of copper was complexes [9]. In addition, iron is key element in respiration and DNA synthesis and found in most soil in oxidized-insoluble form [10]. Deficiency in iron caused change in electron transfer chain, pigment-protein complexes in the photosynthetic apparatus, chlorophyll destruction and leaf chlorosis [11]. Potassium rank is the second in abundance between nutrients and constitutes 2% to 10% of plant dry weight [12]. It is important in leaf and stomatal movement and in tropism [13]. Moreover, it is the nutrient required for plant growth and yield and is essential in controlling programmed cell death and influencing the activity of 70 enzymes [14]. In addition to its role with plants adaptive response to environment [13].

Silicon is the second element in concentration in the soil, and plants grown in soil accumulate 0.1% to 10% of silicon in the tissue [15]. Silicon mechanism was recently discovered particularly with abiotic and biotic stress alleviation, such as heavy metal uptake and transportation in plants. It was reported that Si reduced heavy metals toxicity via stimulating antioxidant system in plants, complexation with the heavy metal in plants parts, also its effect in reducing plants uptake to heavy metals via altering the genetic processes [16].

Zinc in plants is directly linked to metabolism e.g. development, reproduction and signaling as it is associated to hundreds of enzymes [17]. Zinc has low mobility so its declined availability in plants is a common problem particularly in plants grown in calcareous soil [18].

In the present investigation, the physiological and chemical activities of F. benjamina tree grown in gardens of college of science, king Faisal University were underlined as fig tree growing under Saudi Arabia canopy. Two trees of one month age difference were selected and the leaves were analyzed for the presence of antioxidant system, photosynthetic apparatus, mineral nutrition and other biologically active organic components using GC-MS technique.

Leaves from two F. benjamina trees ' 90 and 120 days old' were detached from the two trees standing one meter far from each other in the garden of College of Science, King Faisal University.

Leaves from 90 and 120 days old F. benjamina trees were ground and homogenized with 70% acetone to extract pigments. Content of chlorophyll a & b and carotenoids were quantified spectrophotometrically following a method described by [20].

The enzyme preparation was obtained following a method described by [21].

The activity of SOD was measured according to [22].

The activity of CAT was determined following the method described by [23].

The extraction of 100 mg freeze dried blended leaves was performed with 100% methanol 1:10 for 30 min. at 70°C. After centrifugation at 13000g for 15min, the supernatants were used for further analysis. The phenolic content of leaf extracts been measured according to [24]. Samples were diluted 1:10 with 10% ethanol. 0.25ml of sample (standard), 0.25ml of 0.1% HCl in 95% ethanol and 4.55ml of 2% HCl were mixed. The solution was left for 15 min before reading the absorbance at 280, 320, 360 and 520 nm with a spectrophotometer Cintra 20 UV–VIS, (GBC Scientiﬁc Equipment Pty Ltd, Hampshire, IL) to estimate total phenolic content, tartaric esters, ﬂavonols and anthocyanins. The following standards were used: gallic acid for total phenolics, caffeic acid for tartaric esters, quercetin for ﬂavonols and malvidin-3-glucoside for anthocyanins, prepared in ethanol. All standards been obtained from Sigma-Aldrich.

Leaves from F. benjamina tree were analyzed regarding their mineral content of calcium (Ca), copper (Cu), potassium (K), iron (Fe), zinc (Zn), and silicon (Si). The digestion and analysis of samples were performed according to [25]. Freeze-dried leaves were digested in CEM microwave digestion (Milestone, Sorisole, Italy) associated with advanced composite vessel accessory set where 0.5 g sample was weighed, 2 ml of deionized water, 5 mL of HNO3 (70% w/w) and 1 ml of 48% HF were added into each vessel. The vessel been sealed except the one to be used for pressure control. The vessels were placed into turntable after sealing the control vessel with a modified cap assembly. The mixture was submitted to the following microwave heating programs (power/time): 100 W/6 min, 100 W/6 min, and 100 W/10 min. Sample solutions were then analyzed by a flame atomic absorption spectroscopy (AAS) instrument (Savant AA, GBC Scientific equipment, Germany) for total metal content. For analysis, multi-element calibration standards were prepared from 1000 mg/l single-element standard solutions (Sigma, MO). The solutions were prepared using ultrapure water.

For potential identification of organic components in ethyl acetate extract of F. benjamina leaves, GC-MS analysis was performed on a HP 6890 Gas Chromatograph fitted with a SGE BPX5 fused-silica capillary column (15m × 220 μm×0.25 μm), and coupled to a HP 5973 mass selective quadrupole detector. Derivatized extracts were injected through Merlin Microseal™. High Pressure Septumin pulsed splitless mode (pulse pressure 17.6 Psi, 325°C). The column oven was programmed to be enhanced with an initial sothermal at 50°C for 2 min. The temperature was increased with 10°C perminute reaching 360°C, then remained at this temperature for 15 min. Helium was a carrier constant gas controlled using 2.0 ml/min flow. The ion source was maintained at 230°C, ionization and fragmentation were accomplished by electron impact (70 eV). The mass filter was scanned between m/z 50 and 700, with a scan rate of 2.29 scans per second.

During the seventeenth and eighteenth [26,27,28] and even much earlier and Ficus benjamina tree plant has attracted attention for its high production of natural active substances, made it important in many countries as folk medicine used for treatments of many diseases. Although studies during these decades were merely investigating the morphological characteristics of the tree. Recently in the nineteenth and beginning of twenty first century, the studies been more focused on many crucial disciplines of this tree; as garden tree, invasive [29], the fig tree being part of the flora in some countries [30] and in many of these studies, their biochemical importance had highlighted [31]. Fig tree is perennial, cultivated in environment of El-hassa, Saudi Arabia characterized with its dry and hot climate during summer (45°C). Leaves from two ages Ficus benjamina trees-growing some two meters close to each other-were collected during April/2015 when the temperature was (25°C /15°C) and investigated for their physiological and chemical characteristics. Our results were categorized in four tables. According to table 1, Ca, Fe and Zn were significantly higher in 90 d old trees compared to 120 d. In contrast, K and Si were highly and significantly increased in 120 d trees. The amount of Cu was not changed significantly in both trees.

Total phenols, tartaric, flavonols and anthocyanins which have been extracted in 70% methanol had exhibited intensive and considerable accumulation in 90 d trees as compared to 120 d old trees (Table 2). The antioxidant activities of superoxide dismutase (SOD) and catalase (CAT) were also higher in 90 d trees (Table 3). However, pigment content (Chl a, b, carotenoids) been accumulated significantly in 120 d trees. The GC-MS analysis of ethyl acetate crude extract of leaves of 90 and 120 d old trees have viewed 15 references (table 4). The five and six compounds which had appeared at retention time: 11.050 min and 12.442 min, respectively, were more concentrated in 120 d trees. Furthermore, the compounds separated at 6.833 min were same in concentration in both tress. The novelty in this study is using ethyl acetate as organic solvent. We observed that the fifteen chemicals, which had appeared in the ethyl acetate extracts (Table 4), had varied from the compounds dissolved in ethanol, methanol or chloroform extracts of leaves [4]. The compound "Phenol 2, 4-bis (1, 1-dimethyleethyl)" which had appeared at Retention time: 12.442 min, was more concentrated in 120 d trees, although total phenols extracted in methanol were generally higher in 90 d trees, which ascertains the specific role of the organic solvents in dissolving particular group of phenols and preventing others that likely been dissolved in another solvent.

Table 2. Total phenols, tartaric esters, flavonols and anthocyanins in one gram dry mass of Ficus benjamin leaves. Standard deviation of the error (±). Superscript letters are the significant difference according to Duncan's test.

Table 4. GC-MS screening of 15 organic chemicals detected in the ethyl acetate extracts of leaves detached from two F. benjamina trees; 90 and 120 days old. (*) means that the reference chemical was much concentrated in 120 d compared to 90 d trees. 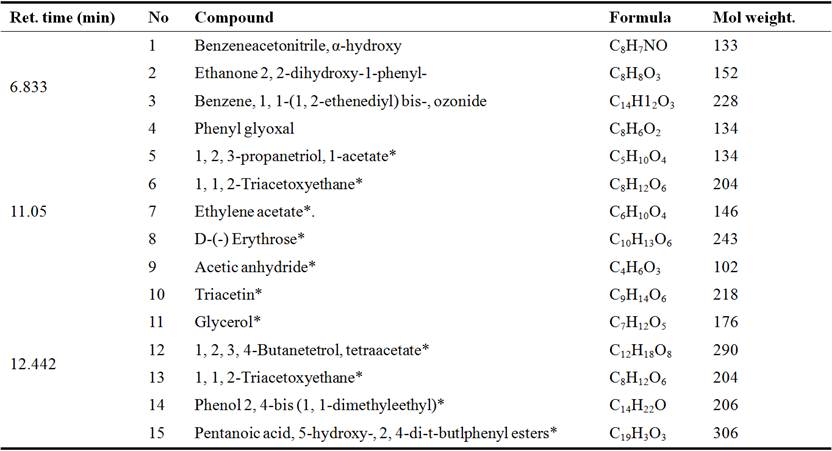 Most important organic compounds that have been detected in the ethyl extract of leaves were:

1)  The phenyl glyoxal, with a known role in cytotoxicity to carcinoma cells besides its antimicrobial activity against Bacillus subtilis and E. coli [32].

2)  Benzeneacetonitrile, α-hydroxy, which has been discovered as antiprotozoal agent and has value as pharmaceutical compound [33].

3)  Ethylene acetate was injected to cattle with hormones to salve manufacture problems [34].

5)  Triacetin, was reported as toxic for mice, rats and frogs, used as food flavoring [36].

6)  Glycerol, is potent in many industries e.g. works as biological dressing of amniotic membrane in human [37], assist with heavy metal removal [38], add value for manufacturing polymers and chemicals [39], has antimicrobial properties and as thermos-mechanical barrier [40]. In addition to its potential as Saccharomyces cerevisiae growth enhancer [41].