Rice (Oryza Sativa L.) is the staple food for the half of the world’s population. Bangladesh ranks 4th in both area and production and 6th in the production of per hectare yield of rice. The three seasons of Rice namely, Aus, Aman and Boro covers total 80% of the total cultivable area of the country. Bangladesh will require about 27.26 million tons of rice for the year 2020 due to increase of population. The increase rate of population is 1.42% (BBS, 2010) and the decreasing rate of agricultural land is 1%. Higher yield can be achieved by two processes, firstly through the cultivation of hybrid varieties, and secondly by following improved management practices (IRRI, 1993). Physiologist defines growth generally as increase in dry mass. According to Tanaka (1980) growth is quantitative and qualitative changes that facilitate increased dry matter production and ultimate grain weight. The growth analysis means the calculation of the components viz. crop growth rate (CGR), relative growth rate (RGR), net assimilation rate (NAR) etc. These components are widely used by plant physiologists and provide some indices of the plant response to its environment (Ahlawal and Saraf, 1983). The yield of rice depends on its different growth parameters, i.e. leaf area index, dry matter production and its partitioning, tillering, etc. (Shams, 2002). High dry matter production, leaf area index, leaf area duration (LAD), CGR, NAR and RGR are reflection in high grain yield of rice (Thakur and Patel, 1998). Hybrid rice technology has been introduced through IRRI and BRRI and commercial seed companies of India and China during the last ten years and has already gained positive experience in the Boro season. It is therefore a prime need to conduct more research work to find out and develop sustainable technologies regarding hybrid rice cultivation under the prevailing local conditions in the Aman season. Julfiquar et al. (1998), observed that the modern inbred rice varities in Bangladesh had longer growth duration of 135-150 days in Aman season with a low daily yield, while high daily yield in hybrid rice was due to its short duration of 120-130 days. Therefore, it is postulated that if hybrid rice is introduced, crop duration can be reduced by 20-40 days. However, some of the newly introduced hybrid rice varities are Shakti 2, BRRI hybrid dhan-2, Suborna 8, Tia, Aloron. So it is prime need to evaluate their performances in Aman season. Under these circumstances, the study was undertaken to compare the performance of aforementioned hybrid and inbred rice varieties in Aman season.

The study was conducted in the experimental farm, Sher-e-Bangla Agricultural University, Bangladesh during the period from April to November 2013. Five hybrid varieties (Aloron, BRRI hybrid dhan 2, Shakti 2, Suborna 8 and Tia) and one inbred check variety (BRRI dhan 33) were used as treatments for this study followed by Randomized Complete Block Design with three replications, where the experimental area was divided into three blocks representing the replications to reduce soil heterogenetic effects. These hybrid varieties were selected as based on market demands. The experimental land was first opened with a tractor and prepared thoroughly by ploughing and cross ploughing. Finally each plot was prepared by puddling for transplanting seedlings. Cowdung at the rate of 10 t ha-1 was applied at the first ploughing and then fertilized with 120, 60, 80 and 50 kg of Urea, TSP, MP and Gypsum, respectively. One third urea and all other fertilizers were applied toincorporate into the soil at the time of final land preparation, and the rest amount of urea was top dressed in two equal splits, at 25 DAT and 50 DAT.

Data were collected on the following crop characters:

These three indexes were measured at the time of 50, 70 and 90 DAT (Days after transplanting) and at harvest.

Leaf area was measured by an electronic area meter (LI 3000, USA) and their corresponding dry weight was recorded after drying at 72±2°C for 72 hours. Sub-sampling was done when the sample volume was excess and difficult to handle. Finally, leaf area was calculated hill-1.

Leaf area index (LAI) was measured at the time of 50, 70 and 90 DAT and at harvest. Data were recorded as the average of 03 plants selected at random the inner rows of each plots. The final data calculated multiplying by a correction factor 0.75 as per Yoshida (1981).

Root, Stem and leaf dry matter hill-1 were recorded at 50, 70 and 90 DAT and at harvest from 10 randomly collected root hill-1 of each plot from inner rows and their corresponding dry weight was recorded after drying at 72±2°C for 72 hours.

Total dry matter hill-1 was recorded at 50, 70 and 90 DAT and at harvest by adding stem dry matter and leaves dry matters hill-1.

Harvesting was done when 80 to 90% of the grains become golden yellow on color. The harvested crops then threshed and cleaned. The grain weight was recorded after proper drying in the sun (14% moisture). Data were recorded on the following yield parameters:

Days to maturity were recorded by counting the number of days required to harvest in each plot.

The total number of effective and non-effective tillers hill-1 were counted as the number of panicle bearing tiller during harvesting. Data were counted from 10 selected hills and average value was recorded.

One thousand clean oven dried (72 ± 2°C for 72 hours with 14% moisture) grains were counted from seed stock obtained from hill-1 in each plot and weighed by using an electronic balance.

Harvest index (HI) was calculated from the grain and straw yield of rice for each plot and expressed in percentage.

The data obtained for different parameters were statistically analyzed to obtain the level of significance using the computer MSTAT package program developed by Russel (1986). The significance of the differences among the treatment means were estimated by the Duncan’s Multiple Range Test (DMRT) at 5% level of probability (Gomez and Gomez, 1984). 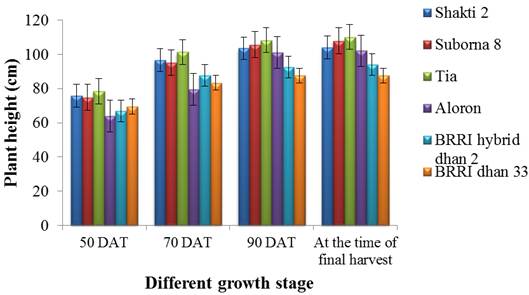 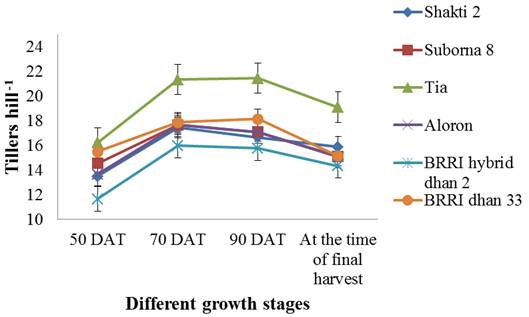 The development of leaf area (LA) over time in test rice varieties was significantly varied during the vegetative and reproductive growth phases (Fig. 4). At 50 and 70 DAT, the highest leaf area hill-1 was produced by Tia (1312 and 2082 cm2 respectively) that was significantly different from others followed by Shakti 2 and the lowest leaf area was in BRRI dhan 33 (756 and 1425 cm2 respectively). At 90 DAT, the highest and the lowest were recorded in Tia (1967 cm2) and BRRI dhan 33 (1413 cm2). The result is also supported by the result of Chandra and Das (2007) in rice. The result indicated that hybrid rice varieties produced the higher leaf area than the check variety and the variation in leaf area. 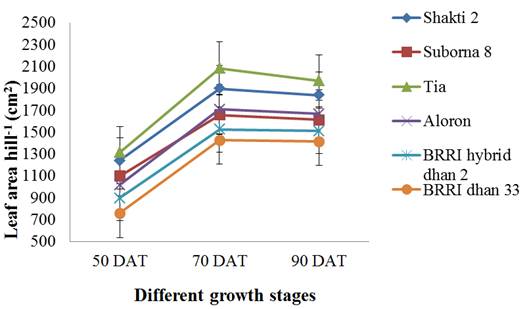 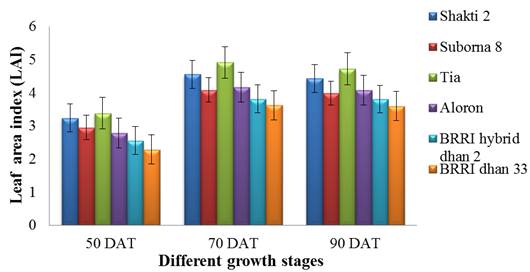 There was significant difference observed in stem dry matter among the hybrid and inbred rice varieties at different growth stages (Table 1). At vegetative and reproductive stages the maximum stern dry matter was again found in Tia and the lowest was found in the inbred variety.

Values with common letter (s) within a column do not differ significantly at 5% level of probability analyzed by DMRT. 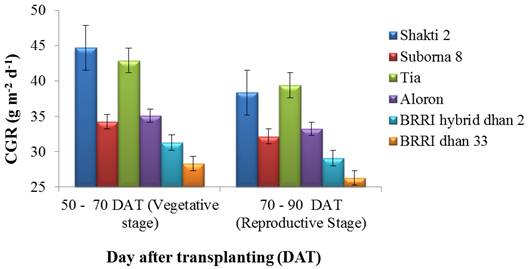 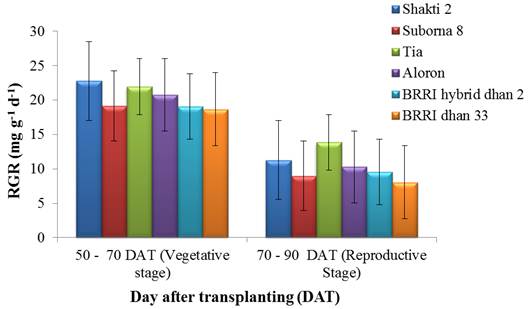 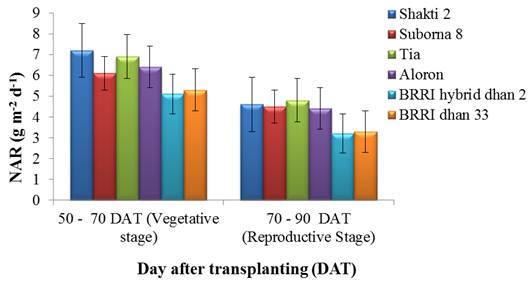 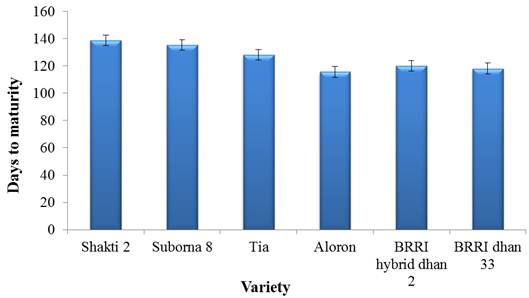 Tia produced the highest number (222.30) followed by Shakti 2 (212.30). This result showed that there was no significant difference between Tia and Shakti 2. On the other hand, BRRI hybrid dhan 2 produced the lowest (159.90) preceded by BRRI dhan 33 (192.05) and they differed significantly (Table 2). This result is in agreement with the result of Dutta et al. (2002) who observed that yield was affected by the filled grains panicle-1.

Aloron showed the highest 1000 – grain weight (29.95 g) due to heavier grain followed by Suborna 8 (28.65 g) which were significantly different. On the other hand, BRRI dhan 33 showed the lowest 1000 grain weight (22.56 g) due to lighter grain which showing significant difference with Shakti 2 (27.75g) (Table 2). Mondalet al. (2005) studied with 17 modern cultivars of transplant Aman rice and reported that 1000-grain weight differed significantly among the cultivars studied.

Values with common letter (s) within a column do not differ significantly at 5% level of probability analyzed by DMRT. 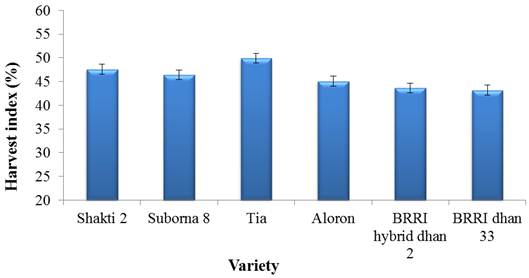 The authors are grateful to Kamal Uddin Ahamed (Sher-e-Bangla Agricultural University, Bangladesh) and Shengyong Wu (Institute of Plant Protection, Chinese Academy of Agricultural Sciences, Beijing, China) for their helpful comments on previous versions of the manuscript.