Abstract: Cumaru is a tree originally from the Amazon. The objective was to analyze the parameters of gas exchange, relative water content, growth and biomass production in leaves and roots of Cumaru plants (Dipteryx odorata) submitted to drought. The experiment was conducted in a greenhouse at the Federal Rural University of Amazonia (UFRA), Belem-Para. The experimental design was completely randomized in split plot in time (four times evaluation and two water conditions: control and drought), with 5 repetitions, totaling 40 experimental units. Were applied Analysis of variance, standard deviations, statistical analyzes and the means were compared by Tukey test at 5% significance. Drought caused reduced in diameter, leaf biomass, transpiration, RWC at 7th day of treatment and increased stomatal resistance. The cumaru was not effective in retaining water in the system. The stomatal closure mechanism secured decreased transpiration in the plant loses less water, entertaining this mechanism also affect plant growth.

Cumaru (Dipteryx odorata) is a tree originally from the Amazon, its wood is appreciated in uses that require mechanical resistance to weathering and deterioration by termites and wood decay fungi. The seeds of this species contains the essential oil called cumarina and the exploration of this oil in the chemical industry has the potential to enable non-timber extraction [1]. The cumaru is a kind of widely dispersed throughout the Amazon, being common in floristic surveys of the region [2], and found in places with small to moderate water deficiency in Amazonas, Acre, Pará, Rondônia and northern of Mato Grosso [3]. There is great concern with the current forecasts indicate that global warming and increased drought in many regions of the planet [4]. And with that, as water resources become scarce, the commercial exploitation of plants tolerant to drought becomes a priority to obtain high yields [5]. Making it necessary to choose species with genotypes tolerant to drought, ensuring income to farmers environments with water scarcity or drought periods. In this sense, the understanding of plant responses to drought is of fundamental importance for understanding the variation of crop water consumption in its different stages of development, being able to interfere with the physiological aspects involved in the process, as well as on their consequences [6].

The studies related to stress conditions are important for physiological ecology and are in tools that enable the evaluation of the limits of tolerance and survival, as well as the adaptation of these species to the conditions of natural stresses [7]. The water deficit is one of the main limiting factors of development and growth of plants, only the species with drought resistance mechanisms can thrive in environments with water limitation [8].

Dry periods may increase the development of the roots, and accumulating assimilates them, which increases the soil water absorbing layer which has water available [9]. Cell growth appears as the most sensitive response to the lack of water in the soil, a small reduction in soil water potential causes decrease in cell growth [10]. The reduction or complete cessation of growth is considered first and the most serious consequence of physiological water deficit for plants, since it compromises cell elongation [11]. To [12] this fact is a standstill in vegetative growth occurring direction of assimilates produced to the reproductive organs.

In this way, it is essential the ecophysiological study of this species in its early stages of growth, mainly by assisting in the establishment of indicative physiological parameters of tolerance to abiotic stresses. Parameters such that if well used and managed, can improve the production and establishment of new seedlings, and to facilitate the selection of more resistant genetic material desired climate conditions [13].

The experimente was conducted in a greenhouse of Federal Rural University of Amazonia (UFRA), belonging of Agrarian Sciences Institut (ICA), located in Belém-Pará, in a period of three months in 2015. The seedlings of cumaru (Dipteryx odorata (Aubl.) Willd.), from seeds that were provided throught AIMEX (Associação das Indústrias Exportadoras de Madeira do Estado do Pará) with four months old, were placed in plastic pots with a capacity of 3.6 L. The substrate consisted of yellow dystrophic Latosol. Before the start of treatment, all plants were irrigated daily for three months, corresponding to the acclimation time to keep them at field capacity.

Was added 5 ml of solution containing macro and micronutrients in all samples at the start of acclimation in the form of nutrient solution [14], modified in the lab of Biodiversity studies in higher plants (EBPS), UFRA.

The plants were subjected to two water regimes: irrigated (control) and water drought, in which the imposition of drought was obtained by suspension of irrigation in a period of 21 days.

The experimental design was completely randomized in split plot in time (four times evaluation and two water conditions: control and drought), with 5 repetitions, totaling 40 experimental units, each experimental unit was composed of a plant / pot. It was applied to analysis of variance in the results and when there was a significant difference, the means were compared by Tukey test at 5% significance level. Moreover, the standard deviations for each treatment were calculated, and statistical analysis performed by the program ASSISTAT Versão 7.7.

Measurements were performed 9:00 am under natural light with photosynthetically active radiation (PAR) around 680 µE m−2 s−1, and relative humidity (RH) of 80% and air temperature (Tair) 30°C. As samples, mature leaflets were selected and fully expanded from the second or third pair leaves counted from the apex.

The height of the proposed plant was the total height corresponding to the length that goes from stem base to the apex for such measurement a graduated ruler was used in centimeters. The stem diameter was measured with a digital caliper.

Biomass production was measured in the act of each destructive sampling (at 0, 7, 14 and 21 days of water deficiency) where the plants were separated into root, stem and leaf. This biomass after drying in forced circulation oven at 70°C for 72 hours was used to determine the dry mass of root, stem dry weight, dry weight of leaf and total dry mass in analytical balance.

The Relativa Water Content (RWC) present in the leaves of tonka bean under water stress decreased with the passing of days and average the plants controls had water percentage between 87.7% and 85.5% while the plants under deficiency between 88.3% and 37.5%. The significant reduction of RWC was noted from 7 days of water suspension, reaching very low values after the 21 days of stress as shown in Figure 1. 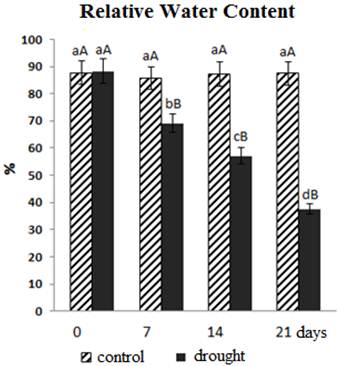 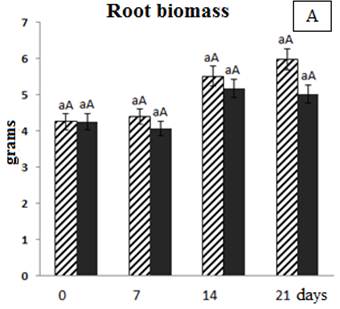 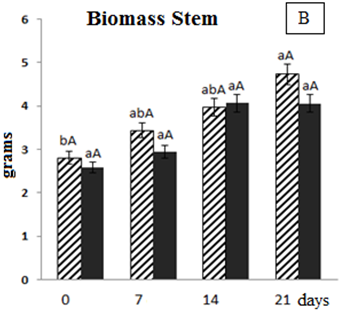 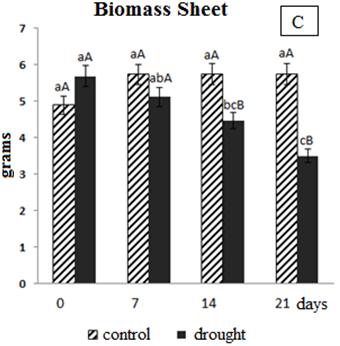 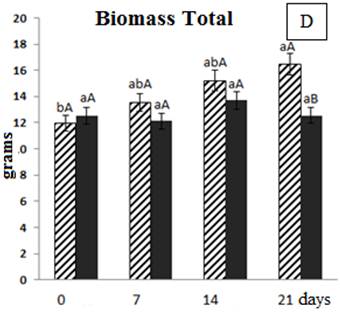 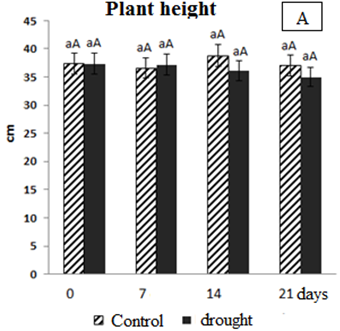 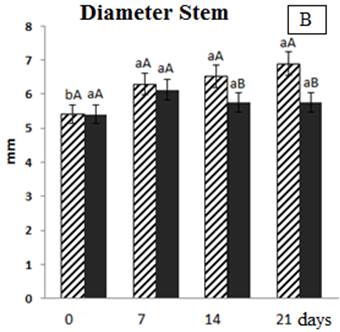 The transpiration dropped significantly in plants under drought throughout the experiment and the stomatal resistance had the opposite behavior (figure 4A). Initially the transpiration was of 4,22 mmol.m-2.s-1 and to 21th day was of 1,24 mmol.m-2.s-1 in plants under drought. The stomatal resistance in time 0 was of 5,14 s.cm-1 and in time 3 of 18,2 s.cm-1 (figure 4B). 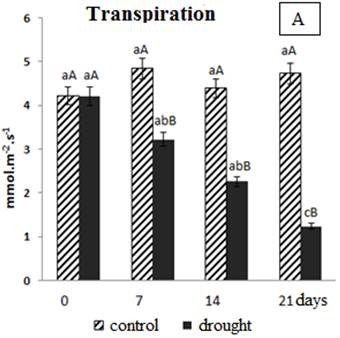 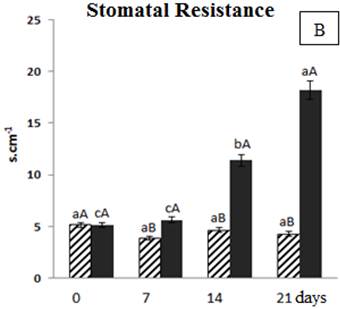 The RWC on the sheets is correlated with the water availability in the soil as well as the efficiency of the plant to assimilate water in adverse conditions and maintaining water in the plant reducing- losses.

The photosynthesis is a process that promotes water loss through the stomata and the low availability of water in the soil decreases the TRA [16].

[17] working with Carica papaya L found a RWC of 59% after 20 days of drought, results came to the RWC of Cumaru with 14 days under drought (figure 1).

The biomass of root and stem of tonka bean presented a growth trend over time in both water conditions, but in both parties this increase was not statistically different (Figure 2). The biomass of leaves showed different behavior of root and stem, in which there was a drop to the 21 day of the experiment in plants under drought. The total biomass reflects the sum of the effects occurred in the biomass of the other part of the plant it was noticed a statistical difference between the control plants and drought at 21 days of stress, it is probably due for the loss of biomass by senescence, and unfortunately these leaves that fell was not possible to account.

Among the morphological characteristics, the leaf area is the first affected by drought due to decreased leaf growth, possibly with senescence as a way of reducing transpiration area [18].

[19] states that the plants under dry treatments tend to reduce the growth of aerial parts in order to promote root growth in search of water. However, the species studied in this study did not present this strategy.

In a selection of seedlings it is necessary to evaluate various parameters accordingly height is a very important variable to be easy to measure and not destructive. The height of the plants studied in this study showed little difference between the treatments and there is no statistical difference between the collection times and enter not into the water conditions apply. The non height growth of Cumaru plants is because of this kind have very slow growth. This statement may be given to analyze the height of the control plants he found in adequate conditions of development and yet not grown in height, then the height of the Cumaru seedlings did not differ between treatments by intrinsic characteristic behavior of this species.

The diameter was probably affected by the decrease of the cell elongation by turgor force that consists of promoted positive pressure by water in tissuem cells called extension tissue mechanism [20].

The Cumaru was not effective in retaining water in the system to present marked reduction in relative water content when subjected to water suspension.

Among the variables height, biomass stem and root did not respond to the stress period keeping average of 36 cm, 4.8g and 3.5g respectively.