Abstract: Medicinal plants have been used in virtually all cultures as a source of medicine. Assurance of the safety, quality, and efficacy of medicinal plants and herbal products has now become a key issue in industrialized and in developing countries. The widespread use of herbal remedies and healthcare preparations is described in the Vedas and the Bible .Medicinal Plants have been used for thousands of years to flavor and conserve food, to treat health disorders and to prevent diseases including epidemics. The knowledge of their healing properties has been transmitted over the centuries within and among human communities. Active compounds produced during secondary metabolism are usually responsible for the biological properties of plant species used throughout the globe for various purposes, including treatment of infectious diseases. Currently, data on the antimicrobial activity of numerous plants, so far considered empirical, have been scientifically confirmed, with the increasing number of reports on pathogenic microorganisms resistant to antimicrobials. Products derived from plants may potentially control microbial growth in diverse situations and in the specific case of disease treatment, numerous studies have aimed to describe the chemical composition of these plant antimicrobials and the mechanisms involved in microbial growth inhibition, either separately or associated with conventional antimicrobials.

The term of medicinal plants include a various types of plants used in herbalism and some of these plants have a medicinal activities. Medicinal plants are the "backbone" of traditional medicine, which means more than 3.3 billion people in the less developed countries utilize medicinal plants on a regular basis. [1]

These medicinal plants consider as a rich resources of ingredients which can be used in drug development and synthesis. Besides that these plants play a critical role in the development of human cultures around the whole world.

The Indian sub-continent has a very rich diversity of plant species in a wide range of ecosystems. There are about 17.000 species of higher plants, of which approximately 8.000 species, are considered medicinal and used by village communities, particularly tribal communities, or in traditional medicinal systems, such as the Ayurveda.

The use of traditional medicine and medicinal plants in most developing countries, as a basis for the maintenance of good health, has been widely observed by UNESCO, 1996[2]. Furthermore, an increasing reliance on the use of medicinal plants in the industrialized societies has been traced to the extraction and development of several drugs and chemotherapeutics from these plants as well as from traditionally used rural herbal remedies [3].

During the past decade, traditional systems of medicine have become a topic of global importance. Current estimates suggest that, in many developing countries, a large proportion of the population relies heavily on traditional practitioners and medicinal plants to meet primary health care needs. Although modern medicine may be available in these countries, herbal medicines (phytomedicines) have often maintained popularity for historical and cultural reasons.

Medicinal plants frequently used as raw materials for extraction of active ingredients which used in the synthesis of different drugs. Like in case of laxatives, blood thinners, antibiotics and anti-malarial medications, contain ingredients from plants. Moreover the active ingredients of Taxol, vincristine, and morphine isolated from foxglove, periwinkle, yew, and opium poppy, respective.

Medicine, in several developing countries, using local traditions and beliefs, is still the mainstay of health care. As defined by WHO, health is a state of complete physical, mental, and social well being and not merely the absence of disease or infirmity. Medicinal plants can make an important contribution to the WHO goal to ensure, by the year 2000, that all peoples, worldwide, will lead a sustainable socio-economic productive life [4].

The practice of traditional medicine is widespread in China, India, Japan, Pakistan, Sri Lanka and Thailand. In China about 40% of the total medicinal consumption is attributed to traditional tribal medicines. In Thailand, herbal medicines make use of legumes encountered in the Caesalpiniaceae, the Fabaceae, and the Mimosaceae. In the mid-90s, it is estimated that receipts of more than US$2.5 billion have resulted from the sales of herbal medicines. And, in Japan, herbal medicinal preparations are more in demand than mainstream pharmaceutical products.

Africa is a rich source of medicinal plants. Perhaps, the best known species is Phytolacca dodecandra. Extracts of the plant, commonly known as endod, are used as an effective molluscicide to control schistosomiasis [5]. Other notable examples are Catharanthus roseus, which yields anti-tumour agents such as vinblastine and vincristine; and Ricinus communis, which yields the laxative--castor oil. In Botswana, Lesotho, Namibia and South Africa, Harpagophytum procumbens is produced as a crude drug for export. Similarly, Hibiscus sabdariffa is exported from Sudan and Egypt. Other exports are Pausinystalia yohimbe from Cameroon, Nigeria and Rwanda, which yields yohimbine; and Rauwolfia vomitoria, from Madagascar, Mozambique and Zaire, which is exploited to yield reserpine and ajmaline.

The use of medicinal plants like Eupatorium perfoliatum (bonest), Podophyllum peltatum (mayapple), and Panax quinquefolium (ginseng) in the USA has long been associated with the American Indians. These plants have also been appreciated and recognized for their aesthetic and ornamental value. In Central America medicinal plants have been widely used - by the Maya Indians in Mexico, the Miskitos and Sumus in Honduras and Nicaragua, the Pech, Lencas, and Xicaques in Honduras, the Pipiles in El Salvador, the Talamancas in Costa Rica, and the Guaymis and Kunas in Panama.

Medicinal herbs, possessing penile potency properties and anti-cancer principles are the focus of smuggling to import markets in Germany, France, Switzerland, Japan, the U.K., and the U.S.A. The best known example, in recent times, is that of tetu lakda (Nothadoytes foetida). Commonly encountered in southern India and Sri Lanka, the herb is exploited as a source of anti-cancer drugs.

The industrial uses of medicinal plants are many. These range from traditional medicines, herbal teas, and health foods such as nutriceuticals to galenicals, phytopharmaceuticals and industrially produced pharmaceuticals. Furthermore, medicinal plants constitute a source of valuable foreign exchange for most developing countries, as they are a ready source of drugs such as quinine and reserpine; of galenicals like tinctures and of intermediates (e.g. diosgenin from Discorea sp.) in the production of semi-synthetic drugs.

Medicinal plants are an integral component of research developments in the pharmaceutical industry. Such research focuses on the isolation and direct use of active medicinal constituents, or on the development of semi-synthetic drugs, or still again on the active screening of natural products to yield synthetic pharmacologically-active compounds.

The world market for plant-derived chemicals – pharmaceuticals, fragrances, flavours, and colour ingredients, alone exceeds several billion dollars per year. Classic examples of phytochemicals in biology and medicine include taxol, vincristine, vinblastine, colchicine as well as the Chinese antimalarial - artemisinin, and the Indian ayurdevic drug-forkolin. Trade in medicinal plants is growing in volume and in exports. It is estimated that the global trade in medicinal plants is US$800 million per year.

In Germany, for example, over 1500 plant species encountered in some 200 families and 800 genera have been processed into medicinal products. In South Africa, likewise, some 500 species are commercialized trade products. Today, Bulgaria, Germany and Poland are recognized as major exporters of plant-based medicinal products.

The development and commercialization of medicinal plant-based bioindustries in the developing countries is dependent upon the availability of facilities and information concerning upstream and downstream bioprocessing, extraction, purification, and marketing of the industrial potential of medicinal plants. Furthermore the absence of modernized socio-economic and public healthcare systems reinforces reliance of rural and lower-income urban populations on the use of traditional medicinal herbs and plants as complementary aids to routine pharmaceutical market products. Recent estimates suggests the over 9,000 plants have known medicinal applications in various cultures and countries, and this is without having conducted comprehensive research amongst several indigenous and other communities.

• Synergic medicine- The ingredients of plants all interact simultaneously, so their uses can complement or damage others or neutralize their possible negative effects. Support of official medicine- In the treatment of complex cases like cancer diseases the components of the plants proved to be very effective.

• Preventive medicine- It has been proven that the component of the plants also characterize by their ability to prevent the appearance of some diseases. This will help to reduce the use of the chemical remedies which will be used when the disease is already present [6]

Dixit, S & Huma, Ali. 2010 [8] reviewed, researched on the antioxi-dant potential of some medicinal plants of origin of Central India. 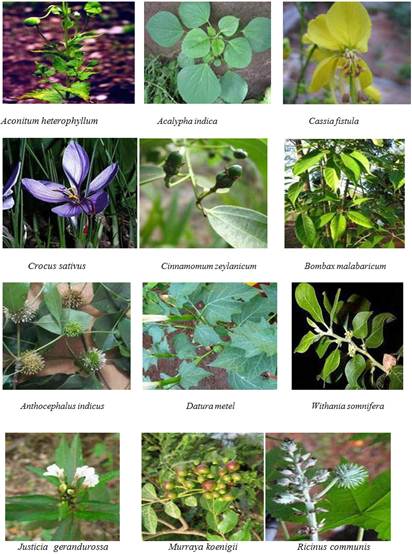 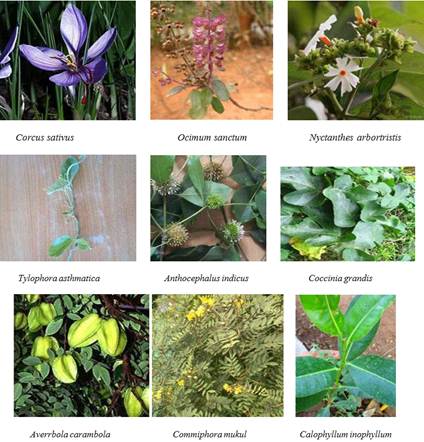 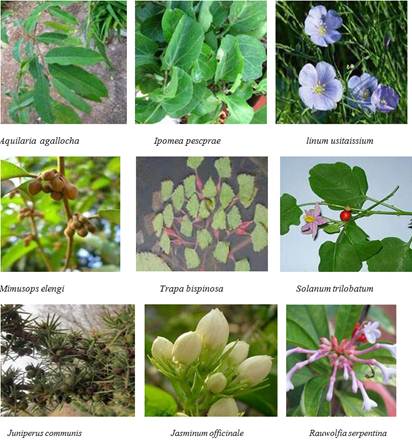 4. Significances of Medicinal Plants to Human Being

Medicinal plants are resources of new drugs. It is estimated there are more than 250, 000 flower plant species.

Phytotherapy is the use of plants or plant extracts for medicinal purposes (especially plants that are not part of the normal diet). Phytochemistry is the study of phytochemicals produced in plants, describing the isolation, purification, identification, and structure of the large number of secondary metabolic compounds found in plants.

Organic compounds produced in the plant kingdom have metabolic functions  essential for plant growth and development  produced in every plant. Include carbohydrates, amino acids, nucleotides, fatty acids, steroids and lipids

Therefore it is a very important point for the open access journals to encourage researchers and clinicians to work hard in order to clarify the main active ingredients which can be extracted from medicinal plants.

Recent and renewed interest in medicinal plants coupled to developments in information technology has fuelled an explosion in the range and content of electronic information concerning medicinal plants as a re-emergent health aid. [10] recently reviewed diverse sources of such information in traditional abstracting services as well as in a variety of online electronic databases. As a result of such developments, access to indigenous peoples and cultures concerning medicinal plants are greatly facilitated. Furthermore, the active participation of such natural custodians and practitioners of valuable knowledge is guaranteed in the generation of research focusing on screening programmers dealing with the isolation of bioactive principles and the development of new drug.