Relationship Between Intracranial Calcifications in Vein of Galen Malformations and Fahr’s Syndrome: A Case Report and Review of the Literature

Vein of Galen aneurysmal malformations (VGAM) are rare congenital vascular malformations defined by direct and/or indirect shunting of arterial flow into an enlarged precursor of the vein of Galen. They comprise 1% of all paediatric congenital anomalies [1]. Most of these malformations present in early childhood, usually causing congestive heart failure in neonates or features of cerebral venous congestion and abnormal CSF flow in older children, in whom calcifications are seen. Calcifications of the basal ganglia, subcortical areas, and thalamus are noted in long standing cases on neuroimaging. Fahr’s syndrome is a rare inherited or sporadic progressive degenerative neurological disorder characterized by abnormal deposits of calcium in areas of the brain that control movement, including basal ganglia, subcortical white matter, thalamus, dentate nucleus, cerebral cortex, cerebellum and hippocampus [2]. It has a prevalence rate of < 1/1,000,000 [3, 4, 5]. Fahr’s syndrome typically presents in the 3rd and 4th decades, however, may present in childhood [6]. Diagnostic criteria of Fahr’s syndrome include (a) bilateral calcifications of the basal ganglia visualized on neuroimaging. Other brain areas may also be observed, (b) progressive neurologic dysfunction, which generally includes a movement disorder and/or neuropsychiatric manifestations. Age of onset is typically in the fourth or fifth decade, although this dysfunction may also present in childhood, (c) absence of biochemical abnormalities and somatic features suggestive of a mitochondrial or metabolic disease or other systemic disorder, (d) absence of an infectious, toxic, or traumatic cause, and (e) family history consistent with autosomal dominant inheritance [6]. Our patient clinically, has neurocognitive impairment of recent poor academic performance at school and intracranial calcifications; both of which are consistent with the manifestations of the rare diseases described above. So, could it be that they are both coexisting in the same patient? We therefore, described our patient and reviewed current literature, and mechanism underlying the formation of the intracranial calcifications. This knowledge would be invaluable to both clinicians and radiologists alike.

The patient was a previously asymptomatic 8-year-old boy, twin, who was referred with clinical features consistent with intracranial thrombosis of sudden onset headaches, bilateral conjuctival injections, proptosis and engorged facial veins, which had begun to regress at presentation to our Centre. There were no seizures, motor symptoms nor visual impairment. He was developmentally slower than the other twin. Recently, he has been having poor grades at school. There was no family history of similar disorder. Examination showed frontal bossing (OFC – 54 cm), and prominent scalp and facial veins. There were no cranial nerve palsies and had normal funduscopic findings. The initial neurological signs of upper motor neuron lesion had regressed 5 weeks after presentation. Developmental assessment and systemic examinations were unremarkable. Neuroimaging led to a diagnosis of vein of Galen aneurysmal malformation (VGAM) with intracranial calcifications, which, was, equally consistent with the imaging characteristics of Fahr’s syndrome. Echocardiography, haematological and biochemical investigations were unremarkable. These findings are presented in the table below:

Table 1. Summary of results of evaluation. 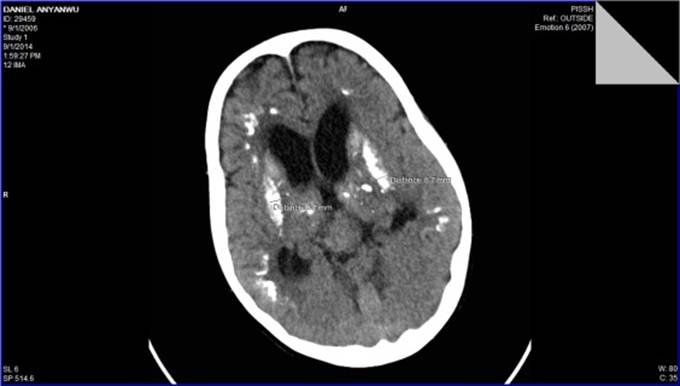 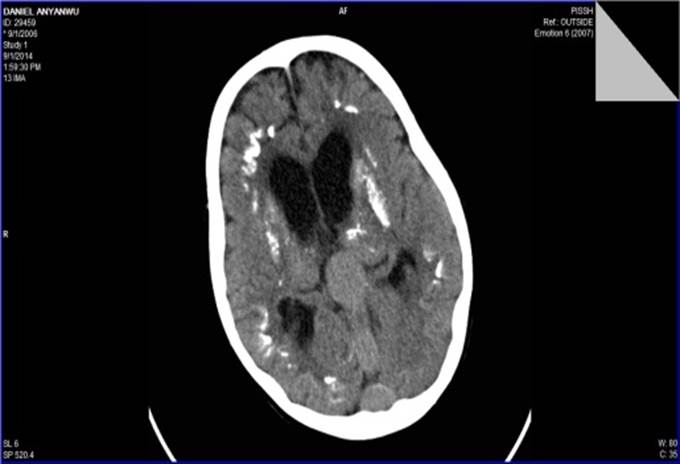 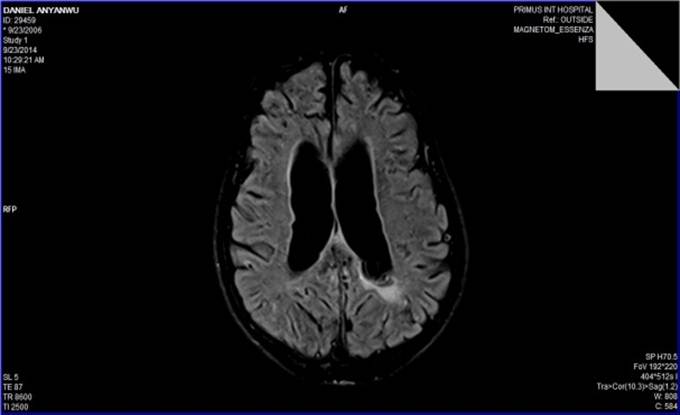 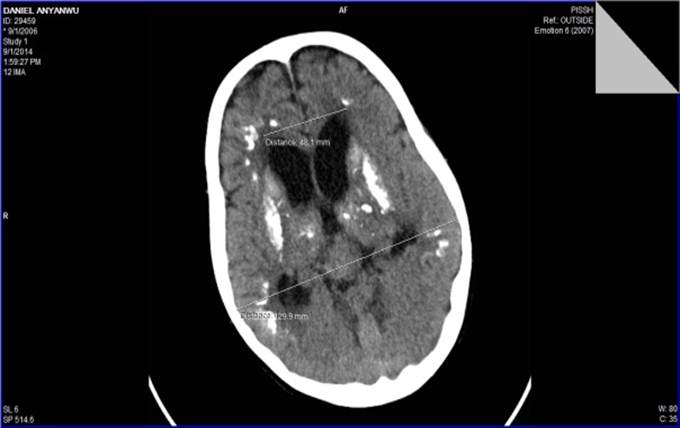 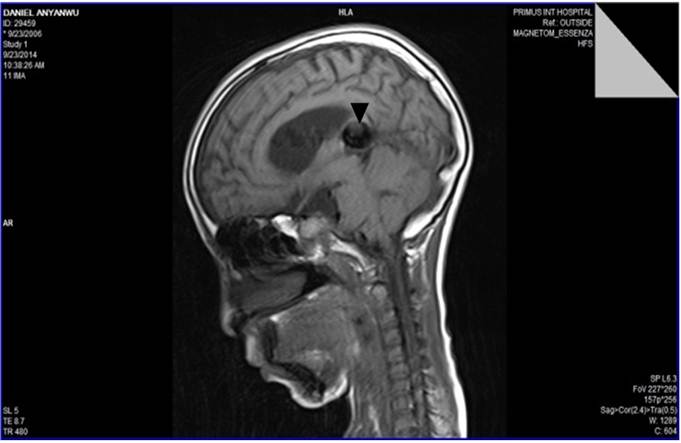 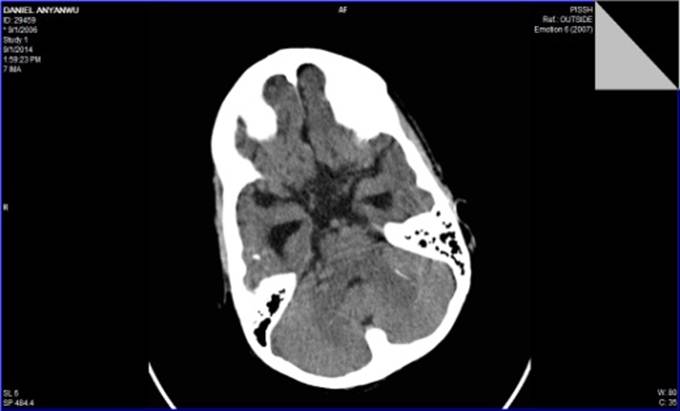 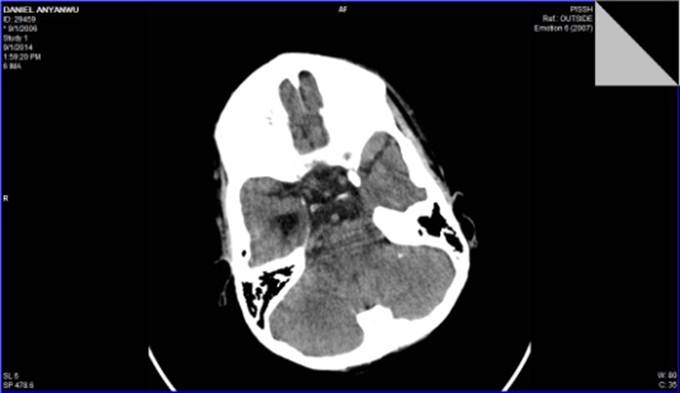 Symmetrical intracranial calcification of the basal ganglia occurs physiologically or in many familial and non-familial conditions; hence, it does not necessarily direct towards a definitive diagnosis. Our patient at age 8 years was diagnosed to have VGAM with characteristic multiple calcification patterns of both VGAM and Fahr’s syndrome. Most patients with VGAM present during the neonatal period [1], [8] and these are the patients with the choroidal type of VGAM, manifesting with congestive cardiac failure. Our patient manifests a childhood type of presentation suggesting the mural type of VGAM without cardiac but neurological sequelae. In one of the largest VGAM study ever, Lasjaunias et al. described only 2 patients of the 317 managed, having multiple intracranial calcifications, and they were of the older children group (7.3%) [8]. Blaise et al corroborated this in their study, with older children being only 7.6% [10]. Fahr’s syndrome patients are usually asymptomatic in the first two decades of life, despite the presence of intracranial calcifications [7]. The clinical presentation, although, consistent with a vascular event of thrombosis, is an unusual presentation of VGAM, and, is not a feature of Fahr’s syndrome. The poor recent-onset poor grade at school aligns with the natural history of neurocognitive impairment of VGAM. A Fahr’s syndrome patient would usually, present in the fourth and fifth decades. However, basal ganglia calcifications > 0.5 cm diameter are associated with neurocognitive impairment [11]. The width of the basal ganglia calcification was 0.67 cm from the patient’s image (figure 1).

The patient had no macrocephaly (OFC of 54 cm was within 98 percentile for age) but frontal prominence. There was ventriculomegaly but no active hydrocephalus (Evans ratio – 0.37), (figure 4). In untreated VGAM, ischaemia due to venous congestion causes subependymal atrophy with ventricular dilatation [8], [9]. This is unknown in Fahr’s syndrome. Active hydrocephalus is a common secondary phenomenon in VGAM, due to two mechanisms – (a) direct occlusion of the cerebral aqueduct, which is rare, and (b) increased intracranial venous hypertension causing a disruption of the hydrovenous equilibrium [8], [9].

Figure 2 describes the intracranial calcifications seen in the patient, consistent with both VGAM and Fahr’s syndrome. However, there was a left cerebellar calcification but not in the anatomic localization of the dentate nucleus (figure 6). Dentate calcification is hardly described in VGAM, but the pathophysiologic basis of calcification in VGAM – ischaemia in untreated VGAMs, due to venous congestion in watershed regions resulting in development of subcortical white matter calcifications, also holds true in the infratentorial region. The Evan’s ratio was 0.37 indicating ventriculomegaly weakly suggestive of hydrocephalus; the sagittal MRI equally showed mild bowing of the corpus callosum and the MRI FLAIR protocol minimal periventricular attenuation (figures 5 and 3 respectively). However, shunting procedures are to be discouraged prior to definitive treatment [8]. Conventional angiography towards definition of angioarchitecture of VGAM is best performed as part of a planned endovascular intervention rather than for diagnostic purposes as VGAM can be initially evaluated by MRI/MRA, and so, was not considered in this patient (9). No literature has specifically described Fahr’s syndrome as a diagnosis of exclusion, be it familial or sporadic, however, it has been described that if no other primary cause for brain calcification is detected or if the family history is suggestive of autosomal dominant inheritance, molecular genetic testing should be considered, and the diagnosis established by Proband [6].

Having been evaluated, endovascular care for the index patient would be sought abroad due to unavailability of same in our setting. This is so as to prevent further neurologic deficits from vascular steal and to prevent psychomotor retardation from venous congestion [9]. Previously, it used to be thought that patients with VGAM with minor symptoms such as ours’ could be managed conservatively as incidences of spontaneous thrombosis occur, but this occurs only in 2.5% of patients [8], [9]. The patient had a partial thrombosis as evidenced by the post-event MRI (figure 5), without spontaneous regression of the vein of Galen malformation. Additionally, the natural history of untreated VGAM is the eventual experience of neurocognitive delay, including mental retardation [9]. These, equally, are the features of Fahr’s syndrome. Patients diagnosed in childhood with VGAM and treated have a greater than 90% long term survival [12].

Characteristic intracranial calcifications of the basal ganglia and other regions of the brain may not direct towards a definitive diagnosis, however, in the presence of an identifiable cause, it is unlikely a diagnosis of Fahr’s syndrome would be entertained. The intracranial calcifications observed in this scenario are attributable to the delayed presentation of untreated effects of VGAM.