Abstract: Aim: We aimed to assess the aesthetic outcome of surgical reconstruction by free ALT flap using binocular single-refraction magnifying glasses and a modified post- operative surveillance protocol. Methods: 16 patients were operated for free antero-lateral thigh flap to reconstruct complex soft tissue defects with a close clinical follow up protocol for post operative care depending on the attending personnel in the Plastic surgery unit, Suez Canal University hospital, Ismailia, Egypt. Aesthetic outcome was assessed using a questionnaire based on Posch et al. 2005, including the following items colour, contour, presence of hair, overall appearance and donor site scar. Results: The patients’ assessed aesthetic outcome was acceptable in majority of the cases; median score was 4 for all assessed items. Complete flap loss occurred in one case, other complications as arterial thrombosis and hematomas and infection were detected and managed accordingly with flap salvage in the 3 complicated cases. Conclusion: The result suggests that the proposed protocol is sufficient as an alternative. The aesthetic outcome assessed by the patient and the failure rate was in line with other studies.

Reconstruction of complex soft tissue defects and extensive soft tissue defects is a challenging problem. Because selected patients require these procedures, the outcome assessment poses always a problem with discrepancy between how surgeon interprets the results to the patients’ opinion which can be totally different. Low incidence of free flap failure [8] nowadays makes the evaluation of the outcome more challenging emphasizing the need for assessing the outcome aesthetically or functionally. Some tools for assessment of aesthetic outcome were developed and are evaluated on several patients groups.[14,15]

The antero-lateral thigh ﬂap was ﬁrst reported for post-burn reconstruction (Song et al., 1984) [3], and since then has become particularly popular among surgeons from China, Taiwan and Japan for reconstruction of complex head and neck defects [4-7]. Over the last 10 years, the free antero-lateral thigh ﬂap has been used for a variety of wounds requiring free fascio-cutaneous ﬂap cover in diﬀerent body regions applying principle of perforator flap harvest.

The economical and financial situation in a developing country like Egypt is not always securing enough funds to meet the increasing demands of the health care field forupdating devices and equipment which is considered as a major obstacle for the health care professionals especially in certain types of surgery like micro-vascular surgery which needs advanced equipment for magnification and for intra and post operative monitoring, in a trial to handle these deficiencies we developed (Plastic surgery unit-Suez Canal University hospitals) our own protocol [1] which suits our limited facilities and equipment including a modified tool to assess the outcome of surgery.

As an alternative to the widely used surgical microscope, we applied the use of binocular single-refraction magnifying glasses[1] which was used mainly in relatively large calibre micro-vascular anastomosis to a smaller calibre type of micro-anastomosis as in the case of perforator based flaps as free Antero-lateral thigh flap (ALT).

A training program was implemented according the guidelines published by Mardini et al. [2] including residents’ physicians and nurses. It was modified [1] by  thorough monitoring of  the early post operative period after free ALT flap surgery to substitute for advanced methods of post operative monitoring as laser Doppler imaging.

Soft tissue defects (the base of the defect is not liable to be reconstructed with split or full thickness skin graft), age between 12 and 60 years.

2.2. Exclusion Criteria (Contraindications for the Operation)

Severe status of chronic illness such as severediabetes mellitus, hypertension, chronic renal failure, severe mental or psychological disorders, andbilateral vascular injuries in the thigh region.In addition, inability to complete the follow up and rehabilitation program as well as smokers were excluded from the study.

16 cases were included in the study with complex soft tissue defects in different body sites, free antero-lateral thigh flap was the procedure in all cases [8] and using binocular single-refraction magnifying glasses, all the operations were done by the same group of surgeons and the same operative theatre. Anastomosis was done using (Proline 7\0) interrupted sutures. The optical principals for the binocular single-refraction magnifying glasses follow the same principles described by Abbas et al. [1]

Part of the subcutaneous tissue of the flap is left exposed for monitoring of the flap viability and delayed coverage after 1 week is done either by skin grafting or primary closure.

-   In the first 2 hours the nurse monitors the perfusion signs of the flap every 5-10 minutes, after 2 hours the monitoring is done twice an hour

-   Clinical observation of perfusion signs done by the resident physician every hour.

-   Every 4 hours: by the resident physician

-   Hand held Doppler (8Mhz) is used to detect the flow in the free flap vascular pedicle (Intra-operative marking of the pedicle site is done).

Clinical observation of perfusion signs: (every 4 hours) by the nurse

Hand held Doppler (8 Mhz) is used to detect the flow in the free flap vascular pedicle.

Hand held Doppler (8 Mhz) is used to detect the flow in the free flap vascular pedicle.

Assessment was done by both the patients individually and panel consisting of 5 independent plastic surgeons, scoring the presence of flap bulkiness, colour mismatch, contour defect, flap contracture and flap sagging. [13,14]

·    Presence of hair on the flap surface.

-   Both the patient and the panel were asked to score satisfaction with each of the flap characteristics using a 5 point scale (1= very unsatisfied, 2= dissatisfied, 3= neither satisfied nor dissatisfied, 4= satisfied, 5= very satisfied).

-   Our score was validated by conducting a pilot study over 4 patients.

-   The evaluation sheet was translated to Arabic so as to be used by the Egyptian patients. Validation of this translation was done by translation retranslation method.

-   Donor site morbidity was assessed regarding motor or sensory deficits, and whether it was closed primarily or not.

Data was collected from patients in the form of a written questionnaire, and pre and post reconstruction (Photos) Data was processed by STATISTICA 10 by StatSoft Inc. computer package. Wilcoxon Matched Pairs Test was used to test the differences between patients’ and surgeons panel aesthetic evaluation. P-values < 0.05 were considered significant.

Figure 1. The aesthetic outcome evaluation of the flap done by the patient (blue) and the surgeons’ panel (red). Bars = mean, whiskers = 95% CI. n=15, one case omitted because of flap loss.

Table 1. overview of the studied group.

Table 1 data of all the patients included in the study

There was one case of total flap loss among the studied group. Other complications like arterial or venous thrombosis, hematoma or infections are listed in Table 2 as well as the way they were treated.

Table 2. Showing complications& their management in the study group

N= number of complications which occurred in 4 patients.

The donor sites in all cases (16 cases) of the study group were closed primarily with no need of skin grafts.

The results of the aesthetic outcome evaluation of the flap done by the patient and the surgeons’ panel are presented in figure I. Four of the 15 patients assessed themselves with unacceptable results regarding colour match, 3 were dissatisfied regarding contour and overall appearance, while 1 patient was dissatisfied with his donor scar.Both patients and surgeons scored 4 on the median level in all items and there were no differences between patients and surgeons evaluation (p-values >0.68).

36 years old female who suffered a third degree burn 6 years ago and had developed a severe neck contracture hindering the movement of the neck in all directions with 0 degrees dorsi-flexion. Multiple attempts for release of this contracture with split thickness skin grafts were done with non-satisfactory results and decision for release and use of a free anterolateral thigh flap was taken. 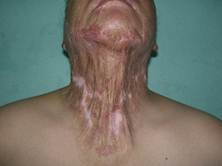 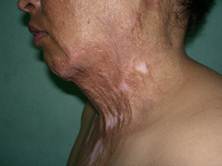 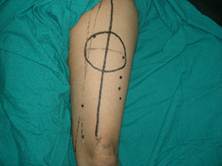 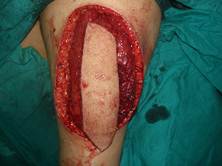 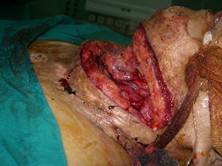 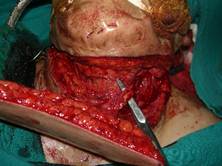 Figure 4. The neck after full release (Lateral view) and anastomosis of the flap pedicle to the superior thyroid artery and veins. 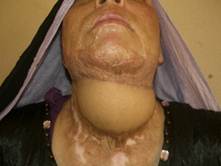 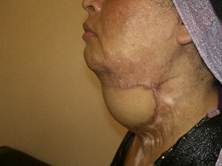 The result of the study suggests that the proposed protocol has shown to be sufficient as an alternative based on the outcome of free ALT flap with only one failure and acceptable aesthetic outcome based on a patient and surgeons’ panel assessment. The result is further strengthened by the similarity between the surgeons’ panel assessment and the assessment done by the patient regarding the aesthetic outcome.

The failure rate in the study was similar to previous studies [8,9], the rate of complication was lower compared to other studies [10,12]. The early detection of post- operative complications allowed dealing with them in a proper manner and leads to flap salvage in 3 cases which is a good effect of the post-operative protocol.

The absence of a control group is a limitation for the study as well as the few numbers of cases. Strength of the study is that it was done in one centre with a tight control of the protocol including the surgical team and technique and outcome assessment. The functional outcome was not systematically assessed however clinical notes of improvement of function were presented to substitute for this.

The result suggests that the proposed protocol is sufficient as an alternative. The aesthetic outcome assessed by the patient and the failure rate was in line with other studies.