Mohamed A. Mlees*, Ahmed A. Darwish

Abstract: Background and aim: Conventional thyroidectomy may cause a long neck scar and a variety of potential complications. The concept of minimally invasive surgery has recently found many supporters in the management of thyroid disorders. The aim of this study was to evaluate the suprasternal approach of modified minimal invasive video-assisted endoscopic thyroidectomy (MIVAET) in treatment of unilateral simple nodular goiter in term of: feasibility of the operation, the identification of recurrent laryngeal nerves (RLN) and parathyroid glands, operative time, postoperative pain and cosmetic result.. Patients and methods: This study was conducted on 20 patients with a simple solitary thyroid nodule in Surgical Oncology Unit at General Surgery Department, Tanta University Hospital from March 2015 to June 2016. Patients included in the study had small nodule less than 5 cm in maximum diameter, unilateral lesion, no previous neck surgery, benign lesion and euthyroid state. Every patient was subjected to MIVAET through a Suprasternal 2-cm neck incision. Results: The present study comprised 18 females (90%) and 2 males (10%) patients with a mean age of 32 years, The mean operative time was 63 minutes, simple nodular goiter was the commonest pathological finding, 90% of the patients stayed in the hospital one day and 70% were satisfied from cosmetic appearance of their scar 6 months after the operation. Conclusion: Modified minimal invasive video-assisted endoscopic thyroidectomy was feasible, can be done safely and effectively with a better aesthetic outcome and pathological control without increasing the risk of complications.

Thyroidectomy is one of the most common operations performed throughout the world and it has a low morbidity if performed by a skilled surgical team [1]. The conventional thyroidectomy normally requires a long collar incision, usually 6-10 cm in length, wide skin flaps and a long midline opening of the strap muscles to provide exposure of the thyroid gland, regardless of the extent of thyroidectomy planned. This conventional approach may cause a long neck scar and a variety of complications [2]. The thyroid gland is frequently affected by benign or low-grade malignant diseases and the majority of patients are young women who consider the aesthetic appearance to be very important. For this reason many surgeons have been prompted to try a minimally invasive approach to thyroid gland [3].

Every patient was subjected to: history taking with special emphasis on symptoms of hypo or hyperthyroidism, general and local thyroid examination and investigations that include: measurement of serum free T3, freeT4, and TSH, Complete blood picture, liver function tests, renal function tests, blood glucose level, neck ultrasonography, fine needle aspiration cytology (FNAC) and vocal cords mobility assessment by ENT specialist. The suspicious cases with atypical cells were immunostained for a panel of markers including Galactin -3, CD56, and HBME-1. Cases suspected to be malignant by immunohistochemistry were excluded from the study.

A written informed consent had been obtained from every patient included in the study after explanation of the nature of the procedure and possible complications. The study was approved by Tanta Faculty of Medicine ethical committee.

All patients were subjected to minimally invasive video-assisted endoscopic thyroidectomy (MIVAET) through a suprasternal neck incision. To reduce the cost of the operation; we modified the original technique by using conventional rather than special surgical instrumentation and electrocautery rather than harmonic scalpel. The operation was performed under general anesthesia; the patient was placed in the supine position with no hyperextension of the neck as this makes it difficult to open surgical planes with retractors. Two assistants were required with the 1st assistant opposite the main surgeon and the 2nd assistant at the head of the patient.

The process of incision design involves the 3 steps described in figure 1. The midpoints of sternal notch, thyroid notch, and mental region were identified and marked respectively as points 1, 2, and 3. The midline of the neck was identified by stretching a 2-0 silk tie between points 1 and 2. Point 4 was marked 2-cm above point 1 in the midline, usually higher in women with large breasts. The distance between points 1 and 4 determines the height of the incision. A 2-0 silk tie running perpendicular to the midline was pressed against the neck through point 4. Points 5 and 6, equally distant from point 4, were marked symmetrically in the perpendicular line. The distance between points 5 and 6 was the planned incision length (1.5-2.5-cm). The skin incision was achieved by connecting points 5 and 6 along Langer’s lines. 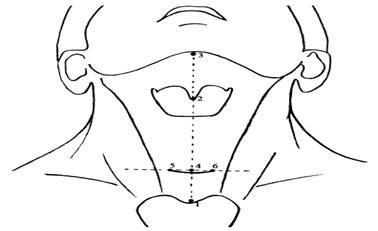 Figure 1. An illustrative drawing showing the incision design for MIVAET[9].

The incision was made through the skin, subcutaneous fat and platysma which were carefully dissected to avoid any minimum bleeding. The skin flaps were raised by blunt and sharp dissection staying in the midline exposing the strap muscles superiorly and inferiorly for approximately 3-4-cm (Figure 2). 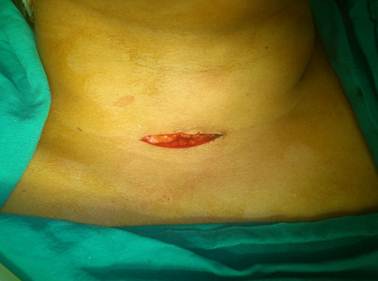 As with conventional thyroidectomy, the midline relatively avascular plane was opened from superior to inferior for at least 3-4-cm. The strap muscles on the affected side were gently retracted with a small conventional retractor; another retractor was placed directly on the thyroid lobe which is retracted medially and lifted up. The dissection of the lobe from the strap muscles was completely carried out through the skin incision by gentle retraction using conventional instruments. The two small retractors maintain the operative space. A 30º 10-mm endoscope was inserted through the skin incision to provide good visualization. Dissection of the thyrotracheal groove was completed under endoscopic vision by using small conventional instruments. Washing and cleaning the operative field was very simple because there are no trocars in this procedure and sterile saline can be injected directly with the syringe.

Avoiding the electrocautery was particularly important when laryngeal nerves had not yet exposed. The 1st vessel to be ligated was the middle thyroid vein (if present) or the small veins between internal jugular vein (IJV) and thyroid capsule. Hemostasis was achieved by means of ligature or electrocautery. This step allows a better preparation of the thyrotracheal groove where the RLN will be later searched for.

Further thyroid gland mobilization was started by dissection of the the lateral aspect of the superior pedicle followed by opening of the potential space medially between the superior thyroid pedicle and the cricothyroid muscle. The superior pedicle was ligated and divided. The inferior vessels were similarly divided, exposing the anterolateral side of the trachea (Figures 3 & 4). 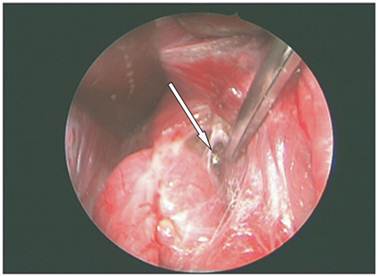 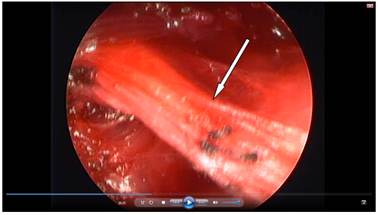 The RLN generally lies in the thyrotracheal groove behind the Zuckerkandl tuberculum (posterior lobe) which was an important landmark in this step. Its vascular supply was preserved by selective ligature of the branches of the inferior thyroid artery (ITA). During dissection; hemostasis was achieved by ligature when dealing with large or small vessels close to the nerve. The RLN was dissected and freed from the thyroid gland (Figure 5). 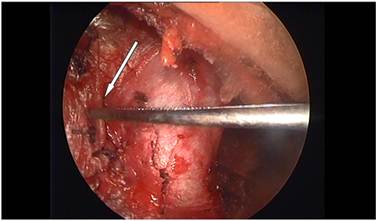 After removing the endoscope and the retractors, the upper portion of the gland carefully was pulled out using conventional forces. Gentle traction over the lobe allows the complete exteriorization of the gland. Large thyroid cyst also was a good indication for this procedure if it was aspirated before pulling out the thyroid lobe from the skin incision. The isthmus was then dissected from the trachea and divided using electrocautery or transfixion ligation. After completely exposing the trachea, the lobe was finally removed (Figure 6). 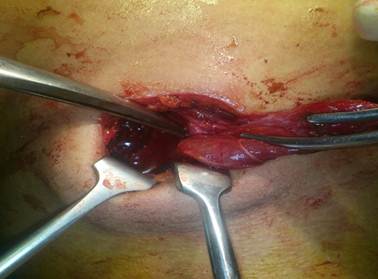 Figure 6. An operative photograph showing extraction of the RT lobe of the thyroid gland.

The deep fascia and platysma were sutured with absorbable suture and the wound was closed with 3-0 polypropylene or vicryl subcuticular suture, the removed specimen was sent for histopathological examination (Figure 7). 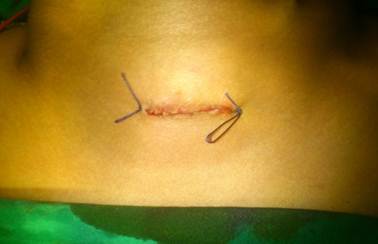 In the first 24 hours, the patients were observed for vital signs, wound hematoma, dyspnea or voice changes. The patients started oral fluid after recovery and regular diet 6 hours after the operation. Measurement of post-operative pain was carried out by visual analogue scale (VAS), which consists of a 10-cm line with the words no pain on the left side and worst pain imaginable on the right side. Every patients were asked to evaluate their pain 6 and 24 hours after operation by indicating its level on the line. Pain severity was defined. Patients with scores of 3 or less were defined as having mild pain, those from 3.1 to 6.9 moderate pain and those with score 7 or more were considered to have severe pain (Figure 8). Mild to moderate pain needed a small dose of oral or injectable nonsteroidal anti-inflammatory drugs (NSAID) and the dose of analgesia increased with severity of pain, while sever pain may required opioid analgesia [13]. 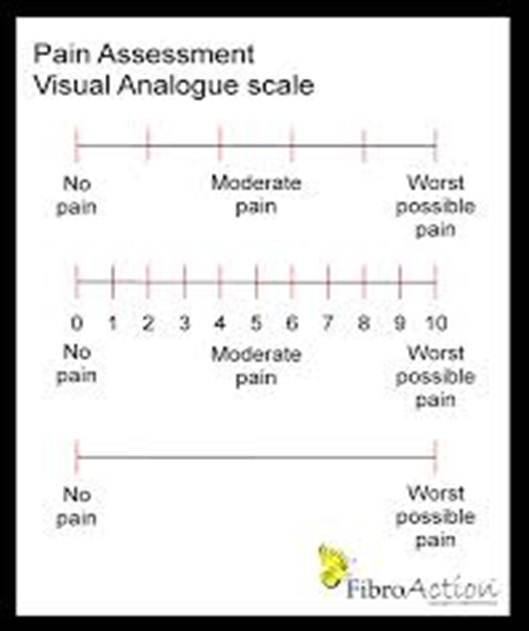 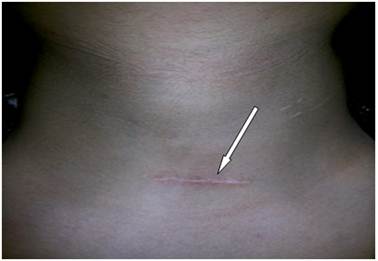 Table 1. The largest diameter of the thyroid nodule, according to ultrasound finding.

Surgical trends have been directed toward less invasive procedures, especially since the establishment of laparoscopic cholecystectomy in 1986. Since the first description of endoscopic parathyroidectomy by Gagner in 1996 [4], several procedures have been proposed for the surgical treatment of primary hyperparathyroidism and the thyroid nodule [5]. Minimally invasive surgery reduces surgical morbidity and consequently the social costs of hospital admission by reducing postoperative hospital stay [15].

In the current study; to reduce the cost of the operation; we modified the original technique by using conventional rather than special surgical instrumentation and electrocautery rather than harmonic scalpel. It is performed by a single horizontal 1.5 to 2.5 cm skin incision. Through this minicervicotomy, under endoscopic vision, it is possible to carry out an operation essentially identical to conventional thyroidectomy.

The present study was the first trial of endoscopic surgery of the thyroid in Tanta University Hospital, so we started with a unilateral simple nodule. The patients offered the advantages of endoscopic surgery without extra cost. The selection criteria adopted in this study was coincided with the same eligibility criteria of Yamashita et al [16] and Michela et al [17] which include: Thyroid nodule of 35 mm or less in largest diameter, the estimated thyroid volume was in the normal range (less than 20 ml). Patients with previous neck surgery, radiation therapy, presence of enlarged lymph nodes, or thyroiditis were excluded from their study. While Bellantone et al [15] had widened the selection criteria; Patients who had undergone video-assisted thyroid lobectomy were selected for video-assisted completion thyroidectomy in cases of malignancy at final histology. Also, selected nodules with maximum longitudinal axis up to 45mm, with a transverse diameter of 15 to 20 mm, were considered eligible for VAT.

Modified video-assisted thyroidectomy can be done safely and effectively with a better identification of all anatomical structures, good pathological control, less postoperative pain, the patients offered the advantages of endoscopic surgery with better aesthetic outcome, cost comparable to the conventional surgery without increasing the risk of complications.