Because that SVM (Support Vector Machine), has small sample, non linear, high dimensional pattern recognition features, it has been more and more widely used in character recognition. However, different parameters will affect the performance of SVM model, Zheng [4-5] has analyzed the influence of the kernel function parameters

and the penalty factor

on SVM performance, but did not give as pecific selection method. Currently the most commonly methods of parameters

of SVM; the n we build a SVM classification model to recognize license plate characters. Experimental results show that our algorithm has a higher accuracy than SVM, Grid-SVM and GA-SVM.

SVM is a machine learning method based on statistical learning theory proposed by Vapnik in 1995. It is based on the theory of empirical risk and the minimization sum of the confidence risk also called the structural risk minimization principle. The purpose of the study was to find a hyper plane which can accurately classify and make two kinds of sample points to its minimum and maximum distance. Suppose training set

is the feature vector.

Lagrange multiplier method and kernel will be used to look for separating hyperplane, then the problem become into:

is kernel function. The optimal solution is

which is located in the open interval

, and calculate the classification threshold

Constructed the decision function as equation (3):

The above algorithm can only solve the problem having only two categories. For multi-classification problem, SVM using the idea of one-one to get it come true, by using the cross-validation group

) ideological training, put the data into

groups, each one of those groups as a test set in turn, and the rest as a training set, then we can get

models, use the average of these

models classification accuracy as the

PSO optimization algorithm derived from the study of birds’ predatory behavior. The basic idea is to find the optimal solution through collaboration and information sharing of the individuals in the groups.

Basic PSO optimization algorithm is described as follows: supposed that reset the target search space as D-dimensional, the whole group consists of Mparticles, the current position of the particle

, the flight speed is

, the optimal search position of particle

, the optimal position of the entire population has searched is

. In every iteration, the particles update their speed and position pass through individual extreme and global extreme. The update formula is shown in (4), (5).

Among them, as the speed of the particles is

; as the inertia weight is

is learning factor, they adjust the maximum step of the particles flight to the beat position of itself and the groups optimal position, usually

is the initial inertia weight;

is the inertia weight when iteration the maximum;

is the current iteration of algebraic;

is the maximum iteration algebra.

PSO algorithm is easy to premature convergence and low precision, low efficiency of the late iteration short comings. Reference GA variability thought, adding mutation in PSO to improve the diversity of the population.

In PSO introduced mutation operator: the basic idea of particle after each update, to initialize the particle at a certain probability. Mutation operators expand the iteration again narrowing of search space, make the particles out of the previous search to search for the optimal position into other areas, and improve the algorithm to find the possibility of a more optimal value.

Studies have shown that RBF is a common kernel function [14], and in a variety of patterns recognition it always has a good result. In this paper, the function is used to carry out experiments, which is shown in equation (7).

is tunable, it directly affect the classifier recognition.

is also an important parameter which affects the performance of the classifier.

Penalty factor is a marked degree of punishment sample misclassification,

value is larger training that emphasizes a smaller error,

value is small that emphasizes the interval is large. It is expected to find a classifier that has better generalization ability.

The quality of the fitness function is a key measure of PSO. In the PSO-SVM each particle represents a set of parameters. Performance of the algorithm is the particle corresponding fitness values which take the set of parameters.

This paper selects CV (a statistical analysis method used to verify the performance of classification, the basic idea is that in some sense, the original data is divided into two parts one is the training set, the other is the test set. The classifier is trained with training set first, then use the test set to test the resulting model. Finally put the resulting classification accuracy as the evaluation classifier performance indicators) sense of accuracy as fitness function in PSO.

The process of optimizing SVM parameters by using PSO is shown in Figure1. 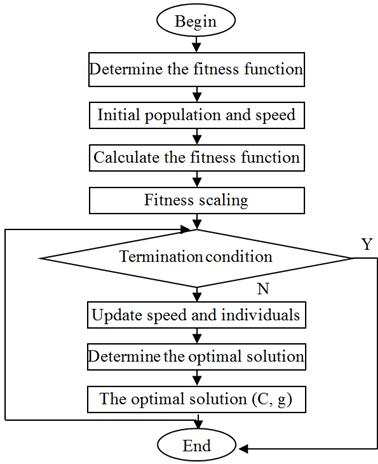 Figure 1. The process of optimizing SVM parameters by using PSO.

SVM kernel function is shown in Equation (7), PSO population size is 20 and the maximum number of iterations is 200.

; the value of penalty factor

, the value of kernel function parameters

In order to compare, we optimize the SVM parameter by using standard PSO and improved PSO respectively. The optimization results are shown in Figure 2 and 3, which illustrate that improved PSO is better than standard PSO. 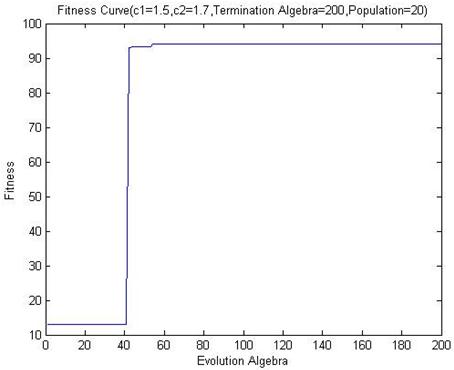 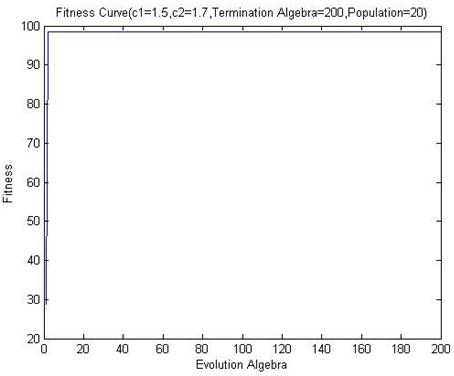 Acknowledge: This paper is supported by the innovation team of china west normal university (CXTD2014-4)