School of Mathematics and Physics, Suzhou University of Science and Technology, Suzhou, China

There are n groups of observational data

and they are the values of n nodes of

The form of general linear regression model is

is a p-dimensional parameter vector and

is a random error variable which meets

There are three frequently-used

pertains to least square method; while

pertains to regression fitting under the least most rule.

Since we have regarded the observational data

as the points in the interval

are all continuous functions. Actually what we need is only integrabel and the fitting function

we are looking for are not discrete points. Due to

, and the definition is

Thus the parameters in

have been determined, let

. Since we hereby want to study the situation in case

reaches the minimum. This method is referred to as least absolute integral method in this article and the geometric meaning is the minimum area enclosed by curves of

within the interval of

is unknown and only the values at the nodes are available, in addition, the integrand is an absolute value function, therefore the commonly used methods for seeking extreme value are invalid. In case the

is substituted by interpolating function, the calculation of the minimal value will be complicated. Especially, in case the

is an essential nonlinearity function, the calculation of the minimal value will be more complicated. Consequently, the article provides simulated annealing and neural network algorithms to find the solution to the integration with neural network algorithm [1-5]. It is feasible to integrate the functions which are complicated and hard to be integrated as well as the functions which only have a series of data without clear analytic expressions. The unknown parameters can be solved with revised simulated annealing algorithm [6-10]. The validity, reliability and accuracy of this method have also been proved by computation example.

2. Method and Model of Simulated Annealing and Neural Network Algorithm

optimizing process is derived from simulated annealing algorithm—refers to 2. 2), then,

has been confirmed and here the calculation of integral is done by using trigonometric function neural network model. Since the integrand is an error function

In consideration of possible cycles, the fluctuation series could be expressed by

The number of hidden neurons is

The excitation matrix is

Set the weight matrix as

Then the output of neural network:

The number of samples is

, set the error matrix as

, the performance index is

is the square of Euclidean norm. Weight adjustment:

is the learning rate and

as the learning rate, Lyapunov function is defined by 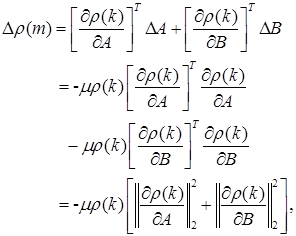 is the square of Euclidean norm, so that: 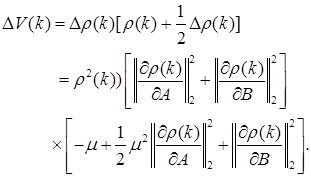 In order to make the neural network algorithm convergent, there shall be

, and the following inequality must be true:

So that, when learning rate is set to be

, the neural network algorithm would be convergent.

2.1.3. Calculation of Integral Based on Trigonometric Function Neural Network Algorithm

Since we know the weight of neural network

and the integral value will be: 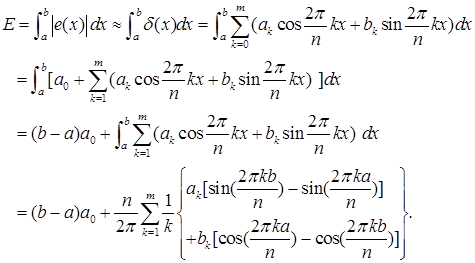 The simulated annealing algorithm i.e. SA algorithm [16-20] was put forwarded by Kirkpatrick and the annealing process of solid was made analogy with combinatorial optimization problems. The purpose of this method is to seek the optimal solution of function or approximate optimal solution by utilizing the method of achieving minimum energy balance during annealing process. The evaluation function is equivalent to energy

while the predefined one set of

parameters correspond to a physical state. The control parameters during the whole optimizing process are equivalent to the temperature

during annealing process, while the SA algorithm can be inverted for optimizing. The concrete steps of algorithm include:

. Provide the ranges of each parameter and select an initial model

randomly within this range. The corresponding objective function value

will be calculated, such will get

, the new model can be accepted; if

will be accepted based on probability

is the temperature. In case of the model being accepted, set

, reiterate the disturbance and acceptance processes for certain times, i.e. , repeat the steps of (2) and (3).

is the predetermined smaller positive number.

(7)    The final solution obtained is the most optimal solution, i.e., the parameter values we are seeking for.

2.2.2. The Improvement of Simulated Annealing Algorithm

During the application of the algorithm, to get the parameters faster and more accurately following improvement could be made:

are values range of No.

is a random number within

is the constant to confirm non-uniformity and

decreases gradually with the increase of iterations (i.e. the decrease of the temperature) thus the search range also narrows, which intensifies the local search ability. In the process of actual computation, the value of

must be controlled reasonably—it is prone to be fallen into local extremum in case the value is too big. Generally speaking it is better to be located within

. The new accepted model will get closer to the actual model to be solved with the decrease of the temperature. Therefore, intensifying local search is more favorable to improve the convergence performance of the algorithm.

As for annealing plan, the practice shows that the changing pattern of

is the initial temperature,

is the given constant and

is the speed factor,

is the iterations. With the increase of

The form of model:

Table 1. Information about household per capita consumption expenditure of urban and the rural residents in China and relevant outcome.

By utilizing the method in the article, the trigonometric function neural network model will take performance index

. The number of hidden layers of neural network

, the sample training rate is

The parameter setting of simulated annealing algorithm is: initial temperature

, the length of Markov chains is 10, temperature drop factor

By software programming with Matlab, we get

The simulated annealing and neural network algorithm has been applied in data fitting least square integral method. The numerical simulation results show that the method is feasible and valid. The simulated results of simulated annealing neural network algorithm are desirable by judging from the test amount . However, the major defect of the algorithm is the contradiction between the precision of solution and long solving time. The solving time will increase greatly with the increase of inverting parameters. In addition, the scope of variation interval of each parameter has relatively great influence on the convergence rate of algorithm. Consequently, how to confirm effectively the ranges of parameters and some initial parameters of the algorithm so as to increase the convergence rate of algorithm is still to be further studied and discussed.