Recent developments of nanotechnology directed to applications in textile areas including fibres are considered. Nanotechnology can provide high durability for fabrics, because nanoparticles have a large surface area-to-volume ratio and high surface energy, thus presenting better affinity for fabrics and leading to an increase in durability of the function. Some of the applications of nanoparticles to textiles are considered [1]. TiO2 is one of the most popular and promising materials in photo catalytic application due to its strong oxidizing power. TiO2 is commercially available and easy to prepare in the laboratory [2].

Several recent studies reported the promising potentials of nontoxic and inexpensive TiO2 nanoparticles (TiO2 NPs) for imparting multifunctional properties to different textile materials [3-8]. The compatibility of TiO2 NPs surface with fiber surface chemical functionalities is one of the most important prerequisites for obtaining stable composite system and long-term durability effects. The tailoring of desirable fiber surface from the standpoint of its chemical functionality for improvement of TiO2 attachment to the fabric surface is very important. NPs binding efficiency is recently gained much scientific interest, generally hydroxyl and particularly carboxylic groups are the potential sites for binding of TiO2 NPs [9, 10]. The alginate was applied as a fiber surface modifier for improvement of binding efficiency between colloidal TiO2 NPs and polyester fabric. The results imply good laundering durability of the fabric [11]. Cationization is a novel treatment on cotton to produce fabric with new characteristics. The nano titanin particles were stabilized on the cotton surface using butane tetra carboxylic acid [12].

Xanthan gum is a high molecular weight polysaccharide. It is used as a rheology control agent in aqueous systems and as a stabilizer for emulsions and suspensions. In textile printing, common thickeners such as guar gum, xanthan gum and sodium alginate are used to control the rheology of the dye pastes; Alginates, guar gum, and xanthan gum are often the thickeners of choice because they are pure non-reactive hydrodynamic thickeners unlike starches and other thickeners. In addition to fashion and comfort demands, the garments today must simultaneously provide self-cleaning properties, antimicrobial and UV protection. Utilizing these advantages is the ideal material for a wide range of uses, including filter materials in industrial applications [13]. The use of cyclodextrins and their derivatives (CDs) in the textile domain is a challenge that rose in the early 80’s. The grafting of CDs onto cellulose fibers by using epichlorohydrin as crosslinking agent was reported [14], also it was covalently linked to the fabrics by the intermediate of the poly carboxylic acid (PCA) that esterified (or amidified) at the same time with the OH (or NH2) groups of fibers and those of CDs [15]. Recently, several studies have reported the presence of nanocrystalline TiO2 layers on textiles that were prepared from sol– gel at relatively low temperatures [16]. Keeping in mind, the polyester fabrics is one of the most consumed fabrics, so the present paper consists to report the results obtained in a study that aimed to apply the above mentioned chemical path onto polyester made fabrics. We describe the study of the parameters involved in this particular textile processing. These parameters include the curing conditions (temperature, time) and also the nature of the reactants. Citric acid (CTA) used as crosslinking agents; sodium dihydrogen hypophosphite (NaH2PO2) was used as catalyst. The methylene blue was used as a model for stain on the fabric surface.

Single-phase anatase sol was prepared according to previous methods [18, 19]. Ten milliliter titanium tetraisopropoxide was added dropwise to 100ml acidic aqueous solution containing1ml nitric acid (70%) and 10 ml acetic acid (97%) under vigorous stirring. The mixtures were heated at 60oC and maintained at that temperature while stirring for 16h.

The polyester fabrics were impregnated in an aqueous bath containing citric acid (5% w/w), the catalyst (NaH2PO2) (0.5% w/w) and the CD or gum) (5% w/w). Polyester fabrics were padded at wet pick up 100%. The fabrics were then dried at 90 oC, and cured at 180 oC for 30 min in case of CD [20], while the curing conditions were studied in case of gum. Samples were washed with water in soxhlet in order to remove unreacted products. The percentage grafting (% wt) of the samples were calculated from the following equation.

Where wt2 and wt1 are the weight of sample after and before treatment, respectively.

Virgin polyester as well as pretreated polyester fabrics were subjected to a dip-pad–dry-cure process. The substrates were dipped in TiO2 sol (containing 1.6% Ti) for 1 min, and padded at wet pick up 100%. The substrates were oven dried, and finally cured at 120oC for different periods of time. The fabrics were then washed in an ultrasonic bath to remove the unbound nano titania from the fabric surface.

2.6. Characterization of the Prepared Nano Titania

The XRD patterns of the prepared nano titania were recorded by using PAN Analytical X Pert PRO X-ray diffractometer and Cu Ka radiation (λ=1.5406 Å) as X-ray source. The scanning rate were carried out at 8 o/min in 2θ range of 20o-70o(θ being the angle of Braggs diffraction), using a wavelength of (λ=1.5406 Å). The crystal diameter has been determined according to Deby-Scherrer formula:

Where K is the Scherrer constant (0.9), the radiation wavelength λ=0.15406 nm, β is the peak width of half maximum; and θ is the Braggs diffraction angle and D is the particle size.

2.7. Characterization of the Modified Polyester Fabrics

The photocatalytic activity of the nano titanium oxide coated PET fabric was investigated by treating the fabric with 2 ml methylene blue (MB) solution (1%) followed by drying at ambient temperature. One half of each methylene blue stain on the fabric was exposed to 400W high pressure mercury lamp for different periods of time. The other half was enclosed with a black paper to avoid its irradiation from the lamp. K/S (absorption to scattering coefficient where, K is the absorption; S, the scattering coefficient.) was assessed to each stain on the fabric (the enclosed and the unenclosed parts) after the exposure to the UV irradiation, using Hunter Lab Universal Software MiniScan TM XE. The efficiency of nano titanium to remove the methylene blue (MB) stain was calculated according to the following equation.

Adopting the AATCC test method 61 – 2003, the washing fastness of the treated fabrics was assessed. Washing was performed using a home laundering machine. The fabrics were washed in 0.15% aqueous solution of sodium lauryl sulphate as detergent and in the presence of 50 steel balls for 45 min. The fabrics were then rinsed with water, and dried at room temperature. 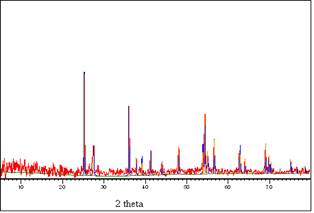 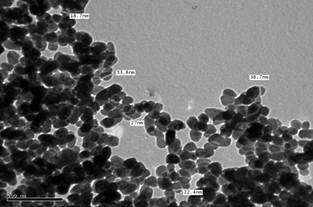 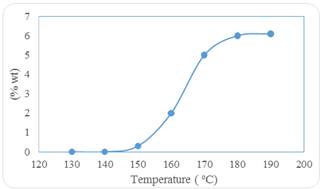 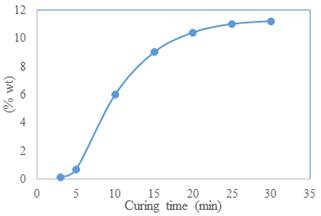 The curing conditions between gum, CTA and PET fabrics were studied at variable temperatures and time. It is observed that, for ten minutes curing, as the curing temperature increase, the (%wt) increases to reach its maximum at 180 oC (Figure 3) after which no appreciable increase in the (%wt) was observed. Figure 4 shows that, the maximum (%) grafting (11%wt) could be attained after 25 min curing at 180 oC. It is worth mentioning that, the %wt of CTA and CD added to PET fabrics was 8.1% at curing conditions of 180 oC for 30 min. The PET fabrics treated by a mixture of CTA and CD or gum resulted in a weight increase of the samples. We could confirm that a permanent grafting occurred as this value did not vary upon the successive washings. The direct reaction between CD and PET fibers has been proved to be impossible. It is concluded that the reaction occurred through the polyesterification between CTA and CD and the formed copolymer is physically adhered or was even entangled into the fibrous network so that grafting was resistant to washings and was thus permanent [15]. 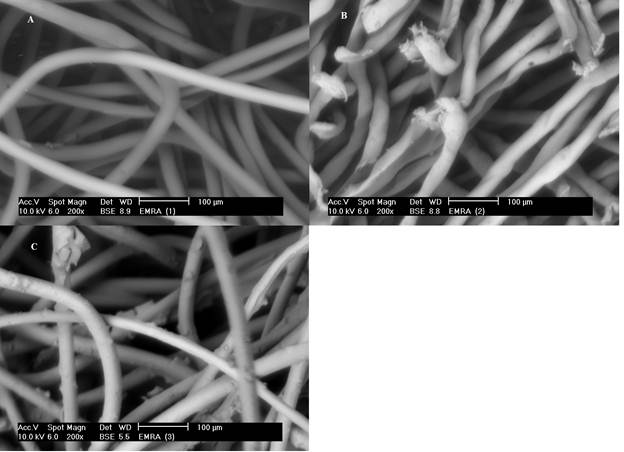 3.3. Characterization of PET Fabrics Treated with CD or Gum

3.4. Influence of TiO2 Concentration and Curing Time on the % MB Removal

The self cleaning property of PET fabrics treated with CTA and CD and after treated with nano titania was studied. Values of % MB dye removal were presented against the nano titania concentration and curing time in Table 1.

Maximum dye removal of (91.7%) was attained when nano titania cured with the modified PET fabrics for 25 min, and that seems to be the required time for the formation of a stable coordination between Ti4+ and the created functionalities on PET fabric.

Table 1. Effect of nano TiO2 and curing time on the% of MB dye removal from PET fabrics pretreated with CTA-CD.

Table 2. Effect of nano TiO2 and curing time on the% of MB dye removal from PET fabrics pretreated with CTA-gum.

The superior ability of PET fabrics treated with gum and after treated with nano TiO2 over CD even at lower curing time, could be explained on the bases of the ability of gum to absorb higher amount of nano titania. In order to elucidate that assumption, the titanium existed on PET fabric modified either with gum or CD was leached out; and the obtained amount of titanium was presented in Table 3. It is clear that CTA–gum is able to bind higher amount of titanium than CTA-CD, which could be referred to the availability of unreacted carboxyl groups of CTA [21] in addition to readily existed carboxyl groups in gum macromolecules (pyruvic acid content 2.3 mg/100g), which is known for its affinity toward nano titania. Similar results was observed in previous study about the affinity of PET fabrics treated with alginates to bond to nano titania [11]. Namely, when diameter of nanocrystalline anatase TiO2 particles becomes around 20 nm or smaller, the surface of Ti atoms adjust their coordination environment from octahedral to more reactive pentacoordinated (square pyramidal) [22,23]. These undercoordinated defect sites are likely the sources of enhanced binding between carboxyl functionalities and Ti atoms. Bearing in mind, CTA-CD only counts on the unreacted carboxyl groups of CTA for the bonding to TiO2. 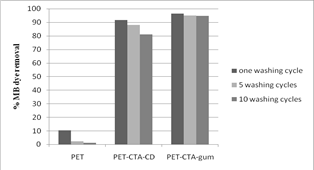