Abstract: The optical properties of TiO2/CuO core-shell thin films were studied after the as-deposited nanocrystalline core-shell thin films were annealed at different temperatures [373K – 673K]. Orthorhombic nanocrystalline structure induced by thermal annealing for the films as confirmed by XRD analysis was observed. The optical properties were obtained from the absorption and transmittance data in the range of 200- 1200nm. The increase in transmittance with increased wavelengths in UV region was not sharp. This indicated that the studied films have both direct and indirect transitions. Annealing was found to have more particular effect on the transmittance within the UV window. The band gaps of the film samples ranged within 1.2eV and 3.7eV to 4.0eV.

Copper oxide is one of the thin films that can easily be deposited on substrates using a simple technique. The first photovoltaic cells observed by Becquerel in 1839 used copper oxide coated metal electrodes immersed in an electrolyte solution [1] CuO thin films were noticed to possess dielectric properties and could also be used as anti-reflection coating films [2]. Copper oxide [CuO] is an inexpensive and non-toxic semiconducting material with a band gap of 2eV which is in the acceptable range of window materials for photocatalysis applications [3]. DC reactive magnetron sputtering has been used to prepare copper oxide thin films on glass substrates. Further more, the structural, morphological, electrical and optical properties of these films [CuO] were found to change with oxygen partial pressure [4]. There has been a report on the deposition of the porous amorphous copper oxide thin films from alkaline sulphate bath, using the cathodic electrodeposition method at room temperature. The as-deposited CuO films were found to be good materials for applications in the supercapacitor [5].

Nanocrystalline TiO2 has been investigated extensively in recent years because of its many potential applications such as photocatlysis and gas sensors [6]. Many reports on TiO2 thin films prepared by using different deposition methods have recently appeared in the literature. For instance, TiO2 thin film having layers with a high degree of crystallinity has been deposited from solution using microwave heating [7]. TiO2 thin films prepared by R.F. sputtering exhibited high absorbance which decreased greatly when an oxygen partial pressure was introduced [8]. TiO2 thin films are the most widely used coatings because of their desirable properties, such as good transmission in the visible and near infrared regions, good adhesion, high stability against mechanical abrasion, chemical attack and high temperatures [9,10].

A new area of investigation for the electrodeposited cuprous oxide thin films for the possibility of application as a window material in photovoltaic devices combined with another suitable p-type and low band gap absorbing semiconductors such as copper sulphide or copper indium diselenide has been carried out. It was noted that annealing below 3000C enhanced the n – type photocurrent produced by the junction [11].

However, before now little is known about TiO2/CuO core-shell thin film and the effect of thermal annealing on its optical properties and band gap. Thus the purpose of this work was to prepare the thin film using chemical bath deposition technique and anneal it at different temperatures before characterization.

The synthesis and deposition of TiO2/CuO core-shell thin films using the chemical bath deposition technique were done using 0.8ml of 1M of TiCl3, 0.3ml of 1M of NaOH and 0.35ml of polyvinyl alcohol [PVA] for the core, whereas 4ml of 1M of copper sulphate, 4ml of 1M of potassium chloride, 2ml of 1M of ammonia and 35ml of water were used for the shell. The bath temperature was between 750 – 800C and the deposition time was 4 hours. Five samples of the thin films were obtained once in order to ensure uniformity in the bath concentration, deposition time and temperature.

The crystallinity of TiO2/CuO core-shell thin films was analyzed using X-ray diffraction. Scanning electron microscope [SEM] analysis was used for studying the films’ morphology while spectrophotometric analysis was used to determine the films’ optical properties. Nevertheless, only the optical properties of these films are presented in this paper. The optical absorption and transmission of TiO2/CuO films were studied in the wavelength range from 200nm–1200nm using Perkin– Elmer Lambda–2 spectrometer. The optical absorption theory is given by the equation,

where hn is photon energy, A is a constant of different values for different transitions,

The variation of absorbance [A] and transmittance [T] with wavelengths are shown in Figures 1a and 1b respectively. The total energy reflected, absorbed and transmitted per unit area per second is equal to the incident energy on the body over the same area in the same time.

where R, A, T denote the fractions of energy which are reflected, absorbed and transmitted respectively and I is the radiation intensity which is incidence on the given surface. 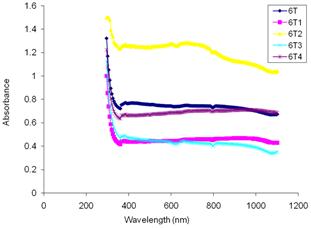 Fig. 1a. Absorbance versus wavelength for TiO2/CuO core-shell thin films. 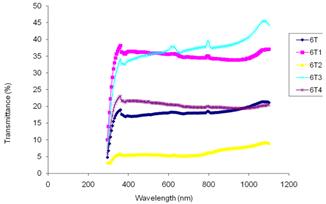 The optical or energy band gaps were evaluated from the absorbance and transmittance spectra, in 1.0 – 5.0eV energy range. Based on the principle of conservation of energy, absorption of photon by a thin film may occur only when the light quanta is greater than or equal to the energy gap of the film [hn ³ Eg]. The graphs of [ahn]2 versus photon energy [hn] for the [as-deposited and annealed] TiO2/CuO core-shell thin films are shown in Fig 2.

From the extrapolations of the straight portions of Fig 2, to the energy axis, the transition of the film sample annealed at 473K assumed an indirect band gap characteristic with the value of 1.5eV, while other samples have direct transitions. The energy band gap of the as-deposited sample was determined to be 3.70eV. The samples annealed at 373K, 573K and 673K have energy band gaps of 4.0eV,  3.90eV and 3.80eV respectively. The observed band gaps are not direct functions of thermal treatment in air. This trend is in agreement with the results obtained by another scholar [11].

Nanocrystalline TiO2/CuO core-shell thin films have been deposited on glass substrates using the chemical bath deposition [CBD] technique. The film samples have both direct and indirect transitions, as observed from the energy band gap values. The absorbance is low in the visible region but a little higher in the UV and NIR regions. These films can be used as UV sensors.

The encouragement and suggestions of the Nanoscience Research Group, University of Nigeria, Nsukka are hereby acknowledged by the authors.