Abstract: Breast cancer continues to be one of the main causes of death among women. Various studies have confirmed that the early detection of sub-clinical cancers may improve the prognosis. X-ray mammography in this case is the best diagnostic technique. It’s based on the interaction of a cone beam X-ray with the mole tissue. The projection image obtained can be analyzed qualitatively by the radiologists. But, an automatic treatment and quantitative analysis of this kind of images is suitable. For this reason several studies are conducted to develop tools to help with diagnosis of this disease (CAD: Computer-Assisted Diagnosis). We propose in this paper a new method to segment mammographic images based partly on a pyramidal architecture. The original image is fragmented (quadtree) initially to homogeneous regions. Each region is then associated with a peak of graph. It gathers data within homogeneous groups named regions classes’ c, then we use HCA (Hierarchical classification ascendant) and k-means to find the optimal partition for the largest possible value of c at the initial stage. This technique gives good results, and allows calculating morphological parameters of the breast cancer.

Breast cancer is the most frequent tumor among women. It is the leading cause of female mortality from cancer. In Morocco, between 30 and 45 thousand people are affected each year by the breast cancer according to official information emanating from the 2001 statistics of the National Institute of Oncology Sidi Mohammed Ben Abdellah in Rabat, and seems to be the first female cancer with an incidence of 60 to 90/100 000 women per year. Worldwide, there is 540,000 cases per year and about 300,000 women die. Therefore, it is a real major global public health problem.

Various studies have confirmed that the early detection of sub-clinical cancers can improve prognosis and that mammography; in this case it is the best diagnostic technique. All radiologists recognize the difficulty of the mammogram that increases by the type of tissue examined in the conditions of implementation, the number of available shots, etc. Radiologists detect around 70% of cancer cases. Due to the increasing cases, and in order to have good diagnostic quality, the automatic assisted diagnosis becomes necessary. In this regard, several studies haddeveloped recent diagnostic tools (CAD: Computer-Assisted Diagnosis) of this disease [6].

Images obtained by mammography use low-dose X-ray. It consists on producing X-ray beam by a source, and measuring its intensity by a camera after passing through the breast compressed between tows plates (figure 1). 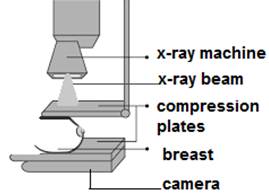 The algorithm of HCA use in its first steps a most expensive routine in time, since they require a large number of distance calculations. For large data sets, the calculation time of this algorithm may become prohibitive. We use to reduce the number of initial regions the K-means, then we apply the HCA on the classes remained.

The pyramid [9][10] can be seen as an iterative processing of a level relative to its nearest lower level. Setting the pyramid regions amounts to create a 1st population of regions constitute the 1st level and then iteratively the evolution of this population regions is established of a level N to level N+1.Finally, wespecify the stop condition in order to stabilize the population. The pyramidal treatment is divided into three key stages: firstly, the original image is fragmented (quadtree) in homogeneous regions. Secondly, each region Ri is associated with a class Ci in the initial level of the pyramid regions formed after the classification of regions. Finally, each region will make the best possible merger with the regions surrounding it.

The segmentation process is to create an image containing the partition of regions according to a specific criterion: color, texture, gray level, etc. A good segmentation helps the radiologist to make the right decision before the intervention.

Segmentation methods based on classification process are seen as a subdivision of the image into different classes so that: the elements of the same class are as similar as possible (minimizing the intra-class variance), and the elements of two separate classes are as different as possible (maximization of inter-class variance). Two types of methods can be distinguished: supervised and unsupervised methods (automatic).

For mammographic image segmentation, supervised classification of the images requires the creation of a learning base for each class and for a large population of patients; it’s a very tedious task for experts [6]. For this reason, our study is focused on unsupervised methods.

K-means [4] is one of the learning algorithms without supervision, easy to implement and solves many problems of classification. It classifies objects based onattributes or characteristics in K class number. Subjects within each class are as close as possible to each other, and as far as possible from objects of other classes. Each class of the partition is defined by its objects and its centroid.

The algorithm is composed of the following steps:

Firstly, Place K points into the space represented by the region that is being clustered. These points represent initial group centroids. Secondly, assign each region to the group that has the closest centroid. Thirdly, when all regions areassigned, recalculate the positions of the K centroids. The last two steps are repeated until the centroids become stable.

It consists on providing a reduced set of classes obtained by successive combination of similar parts [5](figure 2).

In the initial step, the n individuals are obtained by the k-means algorithm. Then the HCA algorithm calculates distances in pairs between individuals, and the two closest onesare merged in a same class. The same process is then applied to the new class and n-2 remaining individuals.

Each class is characterized by its median.

A x0 subject is called a median if:

d is the distance function.

All distances that we use in our method are topographical.

The topographical distance dT (p, q) between two regions p and q is the minimum cost path connecting p to q, as follows:

Entropy (E(p)) is the function that we use to choose the best group. A low value of entropy corresponds to a better clustering [3].

The degrees of membership (U'ij)of pixel xj in class i is calculated as follows [1] :

In the following we present the steps of our method:

Step1: image is divided initially by quadtreeinto homogeneous regions, and these regions are organized in an adjacency graph.

Step 3: we apply the HCA algorithm on the result of step 2; it iteratively performs the following steps until obtaining a single class:

2. Calculation of the semblance matrix MAT between the median Mi classes.

Step 4: we cut the tree made by HCA when we find the minimum value of entropy.

Our segmentation method was applied on mammographic images as showed in figure 3, the image is initially divided in homogeneous regions in figure 4, the figure 5 shows the result of k-means and figure 6 illustrate the HCA result. 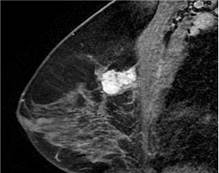 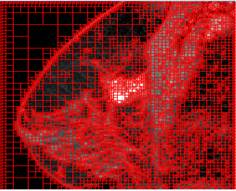 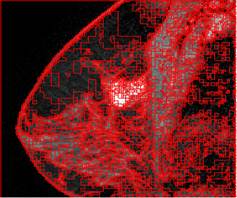 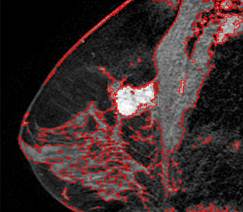 We test the approach on offer digital mammography screening images database of South Florida University (http://marathon.csee.usf.edu/Mammography/Database.html). This database is provided with each of mammography information about breast density and nature of the lesion determined by an expert.

Figure 7. Comparing the shape of the masses detected by the expert (red line) and our approach (green line).

The results of 1, 2 and 3 images show that the lesions are highlighted. Otherwise, the image 4 has false negative detections. The anomalies in the proposed approach reflect that it uses only the intensity property and topographic distance, but specifications are ignored: like shape, size and position. Therefore, this work requires a continuity of adding other geometrical criteria such as the shape or position for a good detection of lesions in a mammogram.

In this article, we present a new method for automatic detection of masses in mammograms. This method has two main steps. The first one is the division algorithm, which aims to dividethe image into homogeneous regions. The second one is the use of HCA and K-means algorithm to find the optimal partition after each merging process.

The detection of regions of interest seems to be satisfactory; nevertheless, this study will be continued in order to work on the classification of masses detected in malignant and benign lesions.