Abstract: Bismuth oxide (Bi2O3) is known for its application in several industries such as solid oxide fuel cells, optoelectronics, gas sensors and optical coatings. The present study was designed to evaluate the effect of biofield energy treatment on the atomic, physical, and thermal properties of Bi2O3. The Bi2O3 powder was equally divided into two parts: control and treated. The treated part was subjected to biofield energy treatment. After that, both control and treated samples were investigated using X-ray diffraction (XRD), thermogravimetric analysis (TGA), Fourier transform infrared (FT-IR) spectroscopy, and electron spin resonance (ESR) spectroscopy. The XRD data exhibited that the biofield treatment has altered the lattice parameter (-0.19%), unit cell volume (-0.58%), density (0.59%), and molecular weight (-0.57%) of the treated sample as compared to the control. The crystallite size was significantly increased by 25% in treated sample as compared to the control. Furthermore, TGA analysis showed that control and treated samples were thermally stable upto tested temperature of 831°C. Besides, the FT-IR analysis did not show any significant change in absorption wavenumber in the treated sample as compared to the control. The ESR study revealed that g-factor was increased by 13.86% in the treated sample as compared to the control. Thus, above data suggested that biofield energy treatment has altered the atomic and physical properties of Bi2O3. Therefore, the biofield treated Bi2O3 could be more useful in solid oxide fuel cell industries.

Bismuth oxide (Bi2O3) is known for its optical and electrical properties such as dielectric permittivity, refractive index, large energy band gap, photoconductivity and photoluminescence [1]. Due to these properties, Bi2O3 play a vital role in the various fields such as optoelectronics, gas sensors and optical coatings. Bi2O3 has five polymorphs i.e. α- Bi2O3 (monoclinic), β- Bi2O3 (tetragonal), γ- Bi2O3 (BCC), δ- Bi2O3 (Cubic), and ε- Bi2O3 (triclinic) [2]. Among these phase, α- Bi2O3 and δ- Bi2O3 are the stable phases, while rest other phases are metastable. Furthermore, δ- Bi2O3 exists in the form of face centered cubic crystal structure [3]. The δ-Bi2O3 is known for its high conductivity among all other phases, which make it best material in solid oxide fuel cell. Although its application as oxide ion conductor is limited, because it is only stable in the narrow temperature range. Recently, the stability of δ- Bi2O3is reported to be increased by various kind of dopants such as Er2O3 [4] and Y2O3 [5] etc. Verkerk et al. reported that erbia-stabilized bismuth oxides are among the best solid oxide oxygen ion conductors [6]. In numerous research, the stabilization of the δ- Bi2O3 was enhanced by doping with 20 to 50% lanthanide ions [7-9]. However, all these process are either required costly equipment setup or high temperature devices. Thus, it is important to study an alternative approach i.e. biofield energy treatment, which could modify the Bi2O3 with respect to its atomic, physical, thermal properties. Recently, the biofield energy treatment has gained significant attention, due to its ability to alter the physical, atomic, and structure properties of metals [10, 11] and ceramics [12, 13]. Furthermore, a human has the capability to harness the energy from the environment/Universe and transmit it to any object around the Globe. The object(s) receive the energy and respond into a useful way that is called biofield energy, and this process is known as biofield energy treatment. Besides, the National Center for Complementary and alternative medicine (NCCAM) has recommended uses of CAM therapies (e.g. healing therapy) in the healthcare sector [14]. Nevertheless, Mr. Trivedi’s unique biofield energy treatment (The Trivedi Effect®) had altered the atomic, physical and thermal characteristics in several ceramics oxides [15,16]. Thus, after considering the excellent outcomes with biofield energy treatment on ceramics and the industrial applications of Bi2O3, this work was undertaken to evaluate the effect of this treatment on the atomic, physical and thermal properties of the Bi2O3 using X-ray diffraction (XRD), thermogravimetric analysis (TGA), Fourier transform infrared (FT-IR) spectroscopy and electron spin resonance (ESR) spectroscopy.

The Bi2O3 powder was procured from Sigma Aldrich, USA. The procured powder was equally divided into two parts and coded as control and treated. The control part was remained the same and the treated part was in sealed pack, handed over to Mr. Trivedi for biofield energy treatment under standard laboratory conditions. Mr. Trivedi provided the treatment through his energy transmission process to the treated sample without touching the sample. After that, the control and treated samples were characterized using XRD, TGA, FT-IR and ESR techniques.

The XRD analysis of control and treated Bi2O3 was accomplished on Phillips, Holland PW 1710 X-ray diffractometer system. The X-ray of wavelength 1.54056 ×10-10m was used. From the XRD diffractogram, the peak intensity counts, d value (Å), full width half maximum (FWHM) (θ°), relative intensity (%) values were obtained. The PowderX software was used to compute the lattice parameter and unit cell volume of the control and treated Bi2O3 samples.The crystallite size (D) was calculated by using Scherrer equation as following:

Where, Dc and Dt are crystallite size of control and treated powder samples respectively.

The thermal analysis of Bi2O3 powder was done using TGA-DTG. For that, Mettler Toledo simultaneous TGA-DTG instrument was used. The samples were heated from room temperature to 900ºC with a heating rate of 10ºC/min under nitrogen atmosphere.

The FT-IR analysis of control and treated Bi2O3 samples were carried out on Shimadzu’s FT-IR (Japan) with frequency range of 4000-500 cm-1. The analysis was accomplished to evaluate the effect of biofield treatment on dipole moment, force constant and bond strength in chemical structure.

The XRD is a quantitative and non-destructive technique, which have been widely used to study the crystal structure parameters of a compound. Figure 1 shows the XRD diffractogram of control and treated Bi2O3 samples. It can be observed that the control sample showed the crystalline peaks at Bragg angle (2θ) 27.08°, 27.68°, 32.70°, 32.93°, 34.70°, 37.24°, 46.03°, and 52.08°. However, the treated sample showed the peaks at Bragg’s angle 27.17°, 27.79°, 32.82°, 33.03°, 34.84°, 37.39°, 46.09°, and 52.17°. It indicated that the XRD peaks were shifted toward higher angles in the treated sample as compared to control, after biofield energy treatment. It is reported that the reduction in lattice parameter and unit cell volume lead to shifting of the XRD peaks toward higher angles [17]. The XRD data of the control and treated samples were analyzed using PowderX software. The crystal structure parameters such as lattice parameter, unit cell volume, density, and molecular weight were computed and presented in Table 1. The data showed that the lattice parameter of treated sample was decreased from 5.6596 Å to 5.6487Å. Kumar et al. reported that the XRD peaks can shift to the higher side if larger radii atoms are replaced by smaller radii atoms [18].

The analysis result of TGA are presented in Table 2. The data exhibited that both the control and treated sample were started weight loss at temperature around 50°C. The control sample lost around 0.22% upto temperature 335°C. After that, the control sample stared to gain the weight and which led to increase the weight by 0.2% upto temperature 821°C and so on. It indicated that control sample was thermally stable. However, the treated sample started to lose its weight at 50°C that continued till 660°C. In this process, the sample lost around 1.7% of its initial weight. The weight loss in temperature upto 335°C in control and treated sample could be due to the elimination of water from the samples. Klinkova et al. had studied the thermal behavior of Bi2O3, where it was reported that the sample continue to show weak weight loss upto 600°C due to the removal of oxygen. It was also mentioned that the formula unit was changed to Bi2O2.902 after heating of the sample upto 600°C [21]. Furthermore, the weight loss observed in control and treated samples were less than 1.7% which may be due to the loss of oxygen or water, thus, it indicated that both samples were thermally stable. 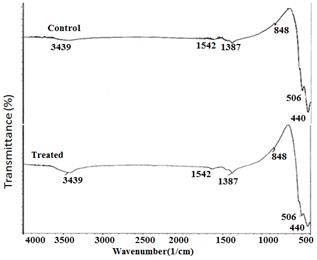 The analysis result of control and treated Bi2O3 samples using ESR are illustrated in Table 3. The data showed that the g-factor was increased from 2.0054 (control) to 2.2833 in treated Bi2O3 sample. It suggested that the g-factor was increased by 13.86% in treated sample as compared to the control. Also, the width and height of the ESR signal were significantly increased by 311.1 and 1188.9% respectively, as compared to the control. Thus, the increase in ESR signal width and height indicated that the interaction of electron with neighboring elements in treated sample probably altered after biofield treatment. It is assumed that the biofield energy, which probably transferred through treatment, possibly acted at atomic level to cause these modifications.

Table 3. Effect of biofield energy treatment on the ESR properties of bismuth oxide.

Authors would like to acknowledge Dr. Cheng Dong of NLSC, Institute of Physics, and Chinese academy of sciences for permitting us to use Powder-X software for analyzing XRD results. The authors would also like to thank Trivedi Science, Trivedi Master Wellness and Trivedi Testimonials for their support during the work.