Abstract: Sensitivity of a waveguide sensor consists of Graphene monolayer between metamaterials (MTMs) layer from below and dielectric layer from above is studied. In this work, we only considered Transverse Magnetic (TM) surface plasmon (SP) at terahertz (THz) range of frequency. Thus, Graphene is assumed to have constant surface conductivity with positive imaginary part. The homogenous sensitivity is derived from the dispersion equation and numerically calculated at different values of MTM parameter. Results show that this structure is valid as a very sensitive sensor that is capable of sensing small signals. Moreover, the sensitivity varies as MTM parameters varies at frequency ranges from 1-10 THz.

Waveguide sensors are considered as a main component in almost all branches of science including, biology, medicine and engineering. Thus, it become a big challenge to model sensors that can detect small changes in compact size. While light propagates through the waveguide, it could detect small changes at the cladding layer. In other words, waveguides are good candidates to design a sensor since they can transmit frequency in optical and microwave range depending on their structure [1-2]. Sensors might work as physical sensor if they transform a chemical or biological reaction in a measurable signal [3] and biochemical sensors that developed from slab structure with step index profile [4-5].

Terahertz (THz) radiation is used in astronomy and communication [6-7]. The propagation and detection of these waves require a development of a novel material such as Graphene and MTM. MTM is a manmade materials that has both negative permittivity and negative permeability [11-13]. Several researches have considered MTM in different applications including sensors [14], isolators [15], and transmission lines [16].

Graphene is a 2-D semiconductor material consisting of honeycomb atoms. It has optical and electronic properties that makes it very important in several applications at THz frequencies [17]. It is mainly considered in many applications including antenna [8-10].

Many research have studied the propagation of plasmons along Graphene [18]. At a certain range of frequencies, Graphene has a conductivity with a positive imaginary part which is needed to support plasmon in transverse magnetic fields modes (TM) [19]. Graphene supports TM surface values with subwavelegth localization in the direction perpendicular to the surface. This property enhanced the idea of developing robust compact size devices [19].

In our work, we proposed a sensor consists of Graphene monolayer on top of Metamaterials (MTMs) layer and covered by dielectric layer. This work is an expansion to previous work for the authors in which they investigate the propagation of THz wave through waveguide has the same structure [20]. In this work, we studied the possibility to use the same structure as a sensor to measure small changes at the cladding layer. We also would like to find out the effect of MTM parameters on the proposed structure keeping the product of the permittivity and permeability of MTM = 4 [21]. The proposed waveguide structure is introduced in section 2. Section 3 presents the results of the proposed structure. The conclusion is given in section 4.

When the imaginary part of Graphene conductivity is positive, the Graphene layer functions as a thin metal layer. The field components of TM modes are [23]

Where the propagation is assumed to be travelling along the z direction. Also, A1 and A2 are the field amplitudes to be find from the boundary conditions and

with i=1 and 2, N is the effective refractive index and k0 is the wave number in free space.

Figure 1. The schematic of the dielectric-Graphene-MTM waveguide. The Graphene layer is at the interface between dielectric and MTM.

Using Maxwell's equation to obtain Ex and Ez and applying boundary conditions, the dispersion relation for TM modes can be written as [24]

As explained σ does not appear in equation (3). However, MTM's parameter ε2 appears explicitly in the equation. Thus, we can measure the effect of MTM parameters on the sensitivity of our sensor. As well as, we found that the frequency plays important role in the behavior of our sensor.

To understand the behavior of the propagating fields in the waveguide, we solved the dispersion equation presented in Equation (2) numerically using Maple. The dispersion equation is solved at different values of ε2 and μ2. The numerical values are chosen such that the multiplication ε2 μ2=4. Table 1 presents the selected values of ε2 and μ2. For the dielectric material, ε1 is chosen to be equal 2.25. The Graphene conductivity is taken from [22] as σ=77.2+j38.6 /i>S.m.

In this paper, we present a new sensor consists of monolayer of Graphene sandwiched between MTM and dielectric. The dispersion equation is derived using Maxwelles'equations. The effective refractive index as function of frequency is numerically solved using Maple. The homogenous sensitivity is derived from the dispersion equation. Then effective refractive index is used to numerically calculate the sensitivity.

The proposed sensor might be used in very sensitive measurements to detect problems in very early stages. 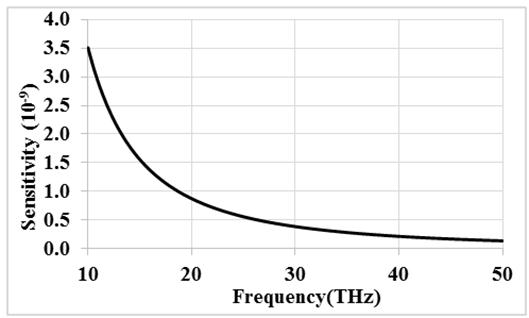 Figure 3. The sensitivity as function of frequency using parameters as in case (4). Sensitivity decreases as frequency increase. 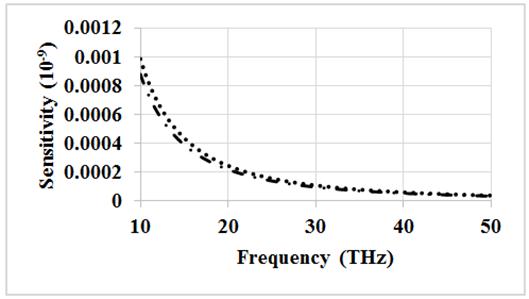