Abstract: Electronic structure of ceramic BiFeO3 surface and Ba / BiFeO3 interface has been investigated in situ in an ultrahigh vacuum via synchrotron-based photoemission spectroscopy within the range of excited photon energy from 120 to 850 eV. The photo emission from the valence band and from Bi 4f, Fe 2p, and Ba 4d core-levels were studied. An effect of Ba atomic layer deposition is found to induce a significant change in all spectra that is originated from the strong interaction with charge transfer between Fe, Bi surface atoms and Ba adatoms. It is obtained that the Fe 2p 3/2 core-level spectrum for the clean BiFeO3 sample contains both the Fe2+ and Fe3+ ion components with atomic ratio of Fe2+ / Fe3+ ~ 1. The Ba adsorption is found to increase the Fe2+ / Fe3+ ratio up to ~ 1.5 that clearly exhibits recharge between Fe3+ ↔ Fe2+ ions and possibility to enhance the ferroelectric polarization.

Multiferroics are the novel group of materials exhibiting coexistence of magnetic and ferroelectric ordering. Magnetism and ferroelectricity are essential to many forms of current technology, and the quiet for multiferroic materials, where these two phenomena are intimately coupled. Multiferroics have potential for applications in spintronics, datastorage, sensors and in tuneable multifunctional devices. BiFeO3 (BFO) is considered as the multiferroic with high Curie point of ~ 1100 K, and high Neel temperature of 643 K [1,2]. BFO is characterized by relatively simple crystal structure as the rhombohedrally distorted perovskite. Recently, photoemission studies for the clean BFO have been carried out [3 – 17]. Most of BFO works focused on core-level spectra. No study is devoted to the valence band spectrum and to the spectra of metal / BFO interfaces.

Data present first photoemission results obtained for the Ba ultrathin layer adsorbed on the ceramic BiFO3 surface and shown possibility of photoemission method to study effect of Ba adsorption on the electronic properties of multiferroics. We perform first photoelectron spectroscopy (PES) study of electronic structure of the ultrathin Ba / BFO interface. Experiments were carried out in situ at BESSYII, Synchrotron, Berlin, using PES with photon energies in the range of 80 – 900 eV. The normal photoemission spectra from the valence band (VB) and Bi 4f, Fe 2p, and Ba 4d core-levels were recorded.

Experiments were carried out at the Russian–German beam line using HIRES station, synchrotron BESSYII, Helmholtz Zentrum, Berlin, by means of PES during synchrotron radiation with photon energies in the range of 60 – 1200 eV. Photoemission studies were performed in situ in an ultra high vacuum of 5 × 10–10 Torr at room temperature. Ceramic polycrystalline sample of BiFeO3 (BFO) was obtained from initial fine-dispersed powder by sintering process in gat a temperature of ~ 1200 K. The BFO sample was preliminary heated in situ at a temperature of ~ 1000 K. Photoelectrons in a cone oriented along the normal to the surface were detected. The normal photoemission spectra from the valence band (VB) and from Bi 4f, O1 s, Fe 2p, and Ba 4d core-levels were recorded. The total energy resolution was 50 meV.

Step-by-step deposition of Ba submonolayer coverage from 0.1 to 1 monolayer was performed onto the BFO surface. To ascertain the Ba coverage, the atomically pure barium source was preliminary calibrated to dosage using the original technique [18]. This made possible to determine the Ba dosage deposited onto the sample to better than 20%. The Ba over layer is presented in monolayer (ML) units because of Ba sticking coefficient could be suppose to equal to one at least up to 1 ML. Note that 1 ML is defined as one complete layer of Ba atoms and equal to ~ 6.5 × 1014 atoms cm2. Moreover, the amount of 1 ML of Ba atoms was determined from the intensity saturation of the Ba 4d core-level-peak.

Overview of the normal photoemission spectrum for the clean BiFeO3 ceramic sample at excitation energy of hν = 400 eV is presented in Fig. 1, Curve 1. The spectrum clearly shows the principal Bi 4f peak and denotes a lack of foreign contaminations. As can been seen, the photoemission in the valence band region (VB) has too little intensity and could be studied at lower excitation energies (see Fig. 2). After Ba adsorption at 0.9 ML the initial spectrum undergoes the significant change in all region showing appearance of Ba 5p and Ba 4d core-level spectra and increasing Bi 4f core-level doublet (Fig. 2, Curve 2). 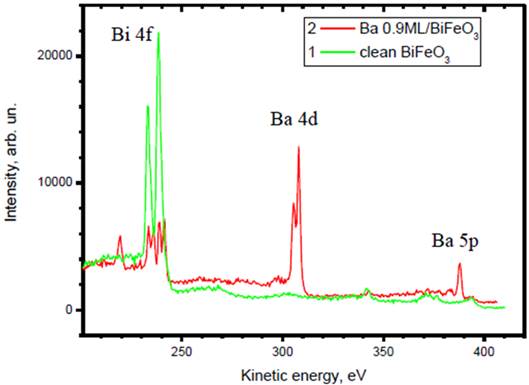 The normal photoemission spectrum of the BFO sample in the valence band (VB) region and Bi 5d core-level is shown in Fig. 2 (Curve 1). The excitation energy is 120 eV. The position of the valence band maximum EVBM = 0 eV. A broad band between binding energies of 0 and 10 eV below the EVBM is obtained. Calculations show that the width of the VB is about 8 eV [4,5]. It is slightly less than obtained experimentally. Two small features located at binding energies of ~ 4 and 6 eV are corresponded to the photoemission from the O 2p and Fe 3d core-levels. The broad feature between 20 and 30 eV is believed to consist of two separate structures, of which at least one is due to the Bi 5d core-level doublet located at a slightly higher binding energy (Bi 5d 5/2 at 26 and Bi 5d 3/2 at 29 eV). An unresolved shoulder at about 22 eV can be attributed to the O-related state, namely, O 2s as shown in [19]. 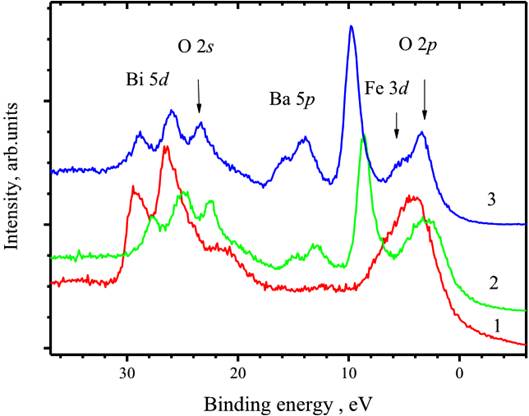 The modification of the spectrum upon Ba adsorption is presented in Fig. 2, Curves 2 and 3. As can been seen, Ba adsorption on the clean BFO is evident to modify throughout the spectrum. The more drastic change occurs at initial stage of Ba deposition at small submonolayer coverage up to 0.5 ML. An evolution of the VB spectrum and an appearance of the Ba 5p ½ and Ba 5p 3/2 core-level doublet at energies of 9.5 and 8.0 eV are observed. The Bi 5d core-level peak is shifted slightly to lower binding energy and reduced in intensity under increasing Ba coverage. The O 2s shoulder at ~ 22 eV is now clearly resolved. Completely unexpected result was that a new additional feature at ~ 10 eV is appeared in spectra (Fig. 2, Curves 2 and 3). Since the intensity of this peak is drastically enhanced by Ba adsorption, it is natural to associate this feature with Ba-related states, for instance, with a Ba surface plasmon.

The Fe 2p, O1 s, and Bi 4f core-levels were studied after the same series of Ba adsorption in order to gain further insight into the reaction of Ba adatoms with BFO surface. The Fe 2p core-level is spilt into the 2p 1/2 and 2p 3/2 components on account of the spin–orbit coupling [6 – 8, 17]. The 2p 3/2 core-level for the Fe2+ ions is observed at binding energy of ~ 709 while for the Fe3+ ions it appears at 711 eV [8,17]. The crystal structure of BFO is composed of the chains of octahedral FeO6 complexes connected by vertexes, while the Bi ions are in cavities between the octahedrons. The magnetic and ferroelectric properties of BFO are due to the Fe ions octahedrically surrounded with the oxygen ions and due to not only Fe3+ ions but especially also due to Fe2+ ions [6,17]. So, studies of the photoemission from the Fe 2p core-level can be used diagnostically to identify the presence both the Fe3+ and Fe2+ ions. 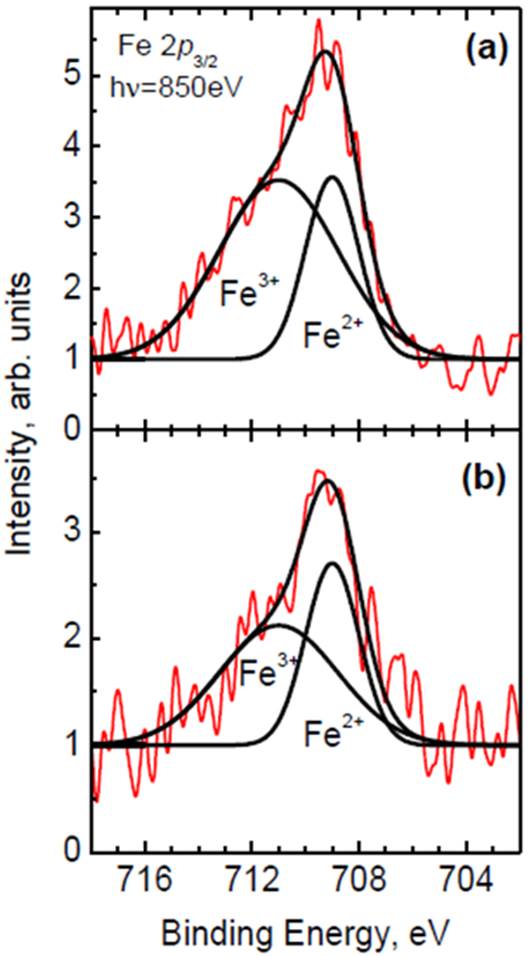 According to the fitting result, the atomic ratio of Fe2+ and Fe3+ ions corresponds to Fe2+ / Fe3+ ≈ 1 in clean BFO. The Ba adsorption on the BFO surface is found to cause significant change in the Fe 2p 3/2 core-level spectrum (Fig. 3b). As can been seen, the atomic ratio is increased up to the value of Fe2+ / Fe3+ ≈ 1.5 or Ba/BFO interface at Ba coverage of 0.9 ML. The observed effect of Ba adsorption signifies the improving ferroelectric polarization [6]. The Ba ultrathin layer on the BFO is found to produce the strong interaction between Ba adatoms and Fe ions that leads to increase the ratio Fe2+ / Fe3+ ≈ 1.5. The Fe 2p 3/2 core-level evolution is obviously caused by the recharge between Fe3+ ↔ Fe2+ ion sand may be one of the reasons for enhanced ferroelectric and magnetic properties of BFO due to increasing in the amount of the Fe2+ ions. 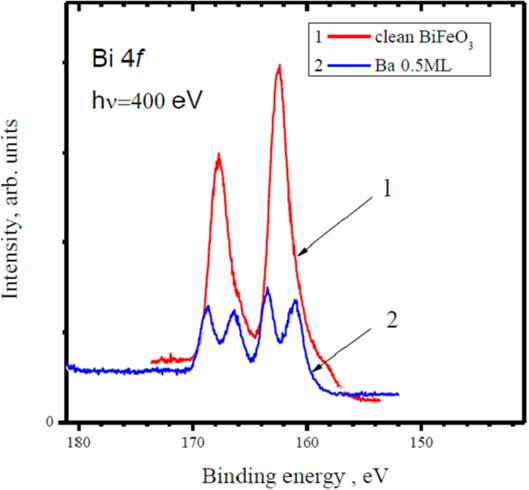 Figure 4. Normal photoemission spectra of the Bi 4 f core-level or the clean BFO sample (1) and for the Ba / BFO interface at Ba coverage of 0.5 ML. Excitation energy hν = 400 eV.

The Ba atomic layer deposition on the BFO surface is found to cause splitting the double structured spectrum of Bi 4f core-level (Fig. 4, Curve 1) into two double structured ones (Fig. 4, Curve 2). The initial Bi 4f core-level peaks is shifted and reduced in intensity with increasing Ba coverage. The appearance of extra fine structure demonstrates the obvious chemical shift of the Bi 4f core-level peaks corresponding to the photoemission from Bi atoms in the interface area. We can attribute the positive shift to the partial redistribution of the Ba adatom charge to the Bi surface atoms and charge transfer from the Ba adlayer to the Bi atoms with increasing both the Bi-ionicity and electron density in the interface area.

To summarize, the Ba adsorption is found to modify the VB spectrum as well as the Fe 2p and Bi 4f core-level spectra. It is revealed that the atomic ratio of the Fe2+ / Fe3+ ions increases from ~ 1 up to ~ 1.5 through the formation of the Ba / BFO interface. The result points out that the BFO ferroelectric polarization could been hanced due to in crease in the amount of the Fe2+ ions under Ba adsorption. The Ba adsorption is found to induce splitting of the double structured spectrum of Bi 4f core-level into two double structured ones accompanied by the chemical shift. It could be attributed to the charge transfer from the Ba adlayer to the Bi surface atoms with increasing both the Bi-ionicity and electron density in the interface area.