Gunnar explained in detail the first field applications of micronized barite in an oil-based drilling fluid. The system was used to drill two wells offshore Norway. Performance data from offset wells will be presented that show ECD and torque values were significantly lower than comparable wells and no instances of particle settlement were observed [6].

Michel reviews the application of HMBF to drill a deviated high-temperature, high-pressure (HTHP) well in the Northern North Sea in 2009. The HMBF was used to drill the 8½-in. section from 6354 to 7327 m. The bottom hole static temperature was 205°C and maximum mud weight 2.15 g/cm3. The well was successfully drilled to TD with no significant sag occurred [7].

Polysulfonate drilling fluids (AF) and polyol drilling fluids (BF), commonly used in HTHP wells in China, are selected to study the performance of high-density drilling fluid densified with micronized barite and API barite. The two fluid formulations are given in Table 1. 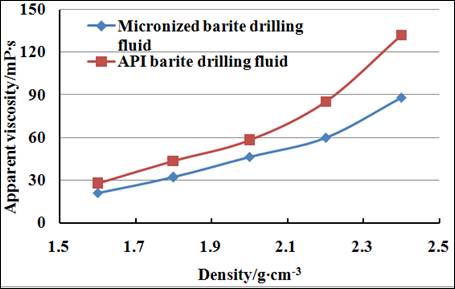 Fig. 1. The viscosity changes with the density of AF weighted with micronized barite and API barite. 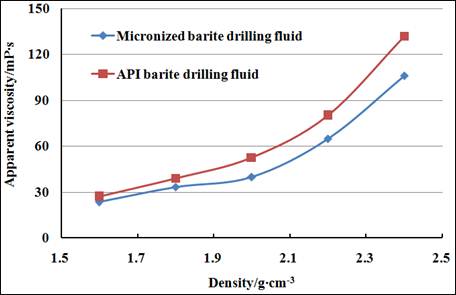 Fig. 2. The viscosity changes with the density of BF weighted with micronized barite and API barite.

Figure 1 and Figure 2 show that the viscosity of HMBF and HABF increases with the density of the drilling fluid. But at the same density, viscosity of HMBF is less than HABF. This is mainly due to the presence of polymer film on the surface of micronized barite after hydrophilic modification, and micronized barite particles show an elastic collision and contact. Compared with the rigid collision and contact between API barite particles, the internal friction with solid-solid phase of HMBF is reduced significantly. At the same time, the hydrophilic of micronized barite is stronger than API barite, and then the internal friction force with solid-liquid phase of HMBF is smaller. The above two aspects lead to a lower viscosity of HMBF than HABF.

As we all know, weighting materials particles are subject to electrostatic repulsion and Brownian motion effect. According to the surface electrical analysis of two kinds of barite (Figure 3), surface zeta potential of micronized barite is -42.9mV in a solution with the pH value is equal to 9.58, significantly less than that of API barite is -28.9mV in an alkaline solution with the pH value is equal to 9.34. Thus the electrostatic repulsion between micronized barite particles is significantly greater than API barite particles, and the particle deposition trend is also reduced.

On the other hand, Brown force has a greater influence on small particle. Based on the particle size distribution of two barites (Figure 4), the size of micronized barite (D50=3.656 μm) is smaller than size of API barite (D50=20.08 μm), and so that the Brown force effect on micronized barite is larger. As a result, the above-mentioned two aspects make HMBF dispersed more evenly, and its sag stability better than HABF [8]. 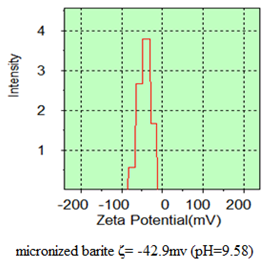 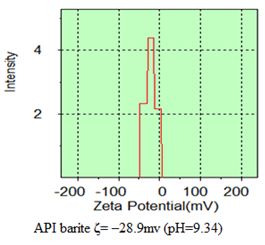 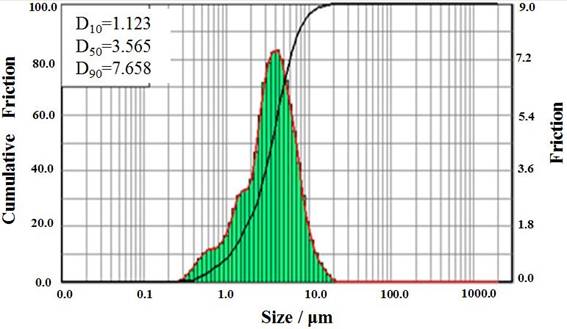 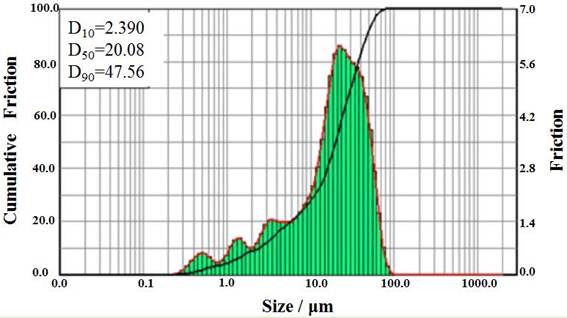 Fig. 4. PSD of micronized barite (uper) and API barite (down). 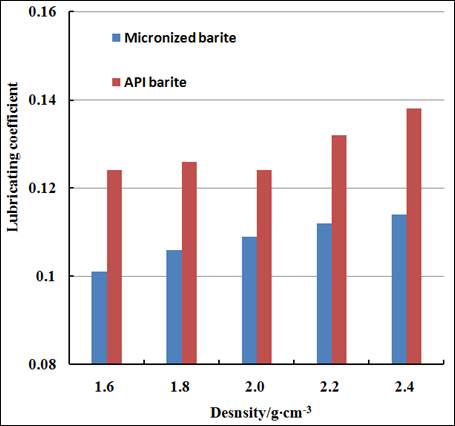 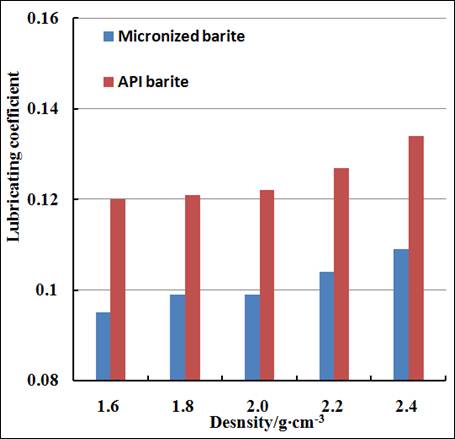 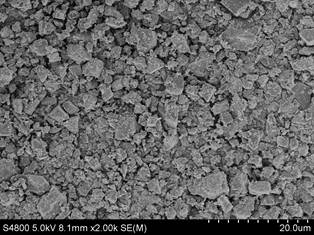 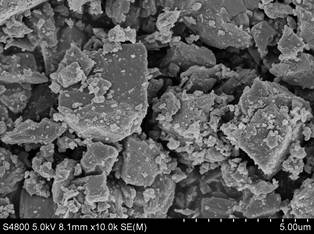 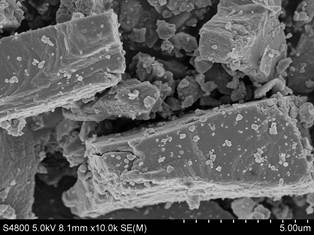 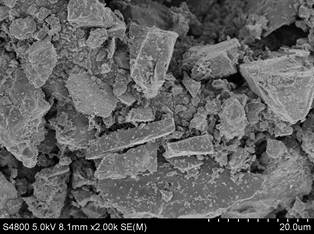 Well X-1 is the first HTHP exploration well with good gas show that was drilled successfully in offshore Western South China Sea and Well X-2 was drilled followed. Well X-1 is located in the high position of concave zone in YQ Basin Slope. The drilled strata of Well X-1 are LD Formation, YGH Formation, and HL Formation. Overlying strata of target layer is the Member 2 of YGH Formation, which is a large suite of regional mudstone, and is in sand wrapped by mud background generally. According to adjacent wells and structural layer data, pressure coefficient of target layer in Well X-1 is predicted to be 1.94-2.08, and temperature is predicted to be 182-185°C, as shown in Figure 7. In the actual drilling operation, formation pressure coefficient of Well X-1 is up to 2.17 and bottom hole temperature reach 187°C by wire-line logging. 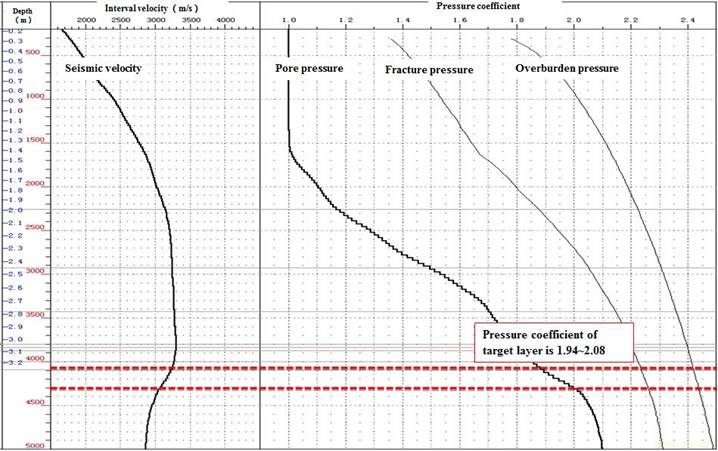 Fig. 8. Density and viscosity of drilling fluid under different depth in the field

On the other hand, HMBF has a higher Φ6/Φ3 reading of six speed viscometer. That is to say, HMBF has a lager Low Shear Rate Viscosity, which means it has good hole cleaning. When using HABF for drilling, there is a thick layer of barite at the bottom of mud pit. However there is barely obvious sag barite at the bottom of mud pit and no blockage in the pipeline while using HMBF.

The drilling fluid is in a static state for a long time during electric logging. Due to the temperature effect, the performance of bottom hole drilling fluid with high density will vary, leading to failure logging operation easily. A few years ago, Electric logging instrument was stuck, cable broke, salvage failed, and backfill sidetracked finally in 8-3/8" hole open of adjacent Well X30-1-1A.

To ensure a successful VSP electric logging when drilling to 4057m, HMBF with the density of 2.21 g/cm3 is padded into the open hole. There is no blocking in lowering the wireline logging tool, and no slacking off in running in drilling pipe after logging operations. Meanwhile drilling fluid has no weight variations due to sag after more than 21-hours static period. When drilling the well to 4098 m at TD, the electric cable is run to 4090 m in Grand Slam, achieving wireline logging operations in a high density of drilling. This shows that HMBF has good lubricity and sag stability.

With excellent high temperature sedimentation and rheological stability, HMBF can reduce the risk of operation in offshore HTHP wells. Micronized barite has a good field application, and has good prospects for future propose.