Drilling mud plays a vital role in the success of drilling operations. It cools and lubricates drill bit, controls well pressure, transports and suspends cuttings. Mud must have a relatively high viscosity in order to effectively suspend cuttings. Therefore mud thickeners are often added into mud to boost mud viscosity. The most widely used mud thickeners are carboxy methyl cellulose (CMC) and hedroxy ethyl cellulose (HEC) [1]. CMC and HEC are inexpensive, but their performances under high temperature and high salinity are compromised.

The oil field is put on production after wells are drilled. Even after primary recovery process and water flooding, large amount of oil remains in the reservoir. Scientists have developed methods to improve oil recovery by injection of steam, chemicals, and carbon dioxide [2,3]. Steam injection is the most effective EOR method for heavy oil, while polymer flooding is the most successful chemical EOR method. Large-scale polymer flooding projects have been carried out in China since 1990s [4]. For the commercial projects, HPAM (partially hydrolyzed polyacrylamide) has been the most widely used polymer for injection. Unfortunately, HPAM severely degrades under high salinity and high temperature [5]. This factor restricts the industrial adoption of polymer EOR method.

Welan Gum (WLG) is produced by fermentation of sugar by bacteria of the genus Alcaligenes. The molecule consists of repeating tetrasaccharide units with single branches of L-mannose or L-rhamnose [6]. The molecular structure is presented in Figure 1. It was reported that WLG exhibits good viscosity retention at elevated temperature, as well as in the presence of sodium chloride [7]. WLG is a widely used thickener in food industry. WLG was also patented as cement additive [8], as well as water shutoff chemical [9]. 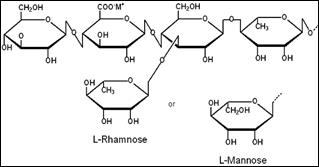 However, very limited research has been conducted to investigate the potential of WLG as a mud thickener, as well as its potential as a polymer for EOR. It would be ideal if welan gum finds multiple applications in upstream petroleum industry.

Welan Gum was provided by BDL Chemical Company in China. CMC of medium viscosity was produced by Gumpro Chemical Company in India. Other materials including Bentonite clay, NaCl, and CaCl2 were purchased from local suppliers. Mud was prepared by mixing clay into tap water with a high-speed mixer. Mud viscosity was measured with industry-standard mud viscometer. It measures the torque under 8 different rotational speeds, ranging from 3 to 600 rpm. The readings can be easily translated into mud plastic viscosity, mud yield point, and mud apparent viscosity.

The test matrix is given in Tables 1. First, a base mud was prepared by mixing 25g of bentonite clay into 500g of fresh water. Then base mud viscosity was measured. The measurements of mud plastic viscosity (PV), yield point (YP), and apparent viscosity (AV) followed textbook and industry standards [10]. Secondly, the effect of WLG concentration on mud viscosity was investigated, by adding different dosage of WLG into the base mud. The third group of tests assessed WLG mud properties at elevated temperatures.

The fourth group of tests was designed to evaluate the performance of WLG mud under the influence of NaCl. Besides, different dosages of CaCl2 were added to WLG mud and the mud viscosity was measured. Finally, WLG mud was held at 85°C for 6 hours to test the effect of aging on mud properties. For the purpose of comparison, CMC mud was also tested under the influences of sodium ion, calcium ion, and long-term heating, as given in Table 1.

For the rheology tests, the viscosity of WLG solution was measured with a torque-type viscometer at varied temperatures and shear rates. Oil recovery experiment was conducted with core flooding equipment. Crude oil sample and rock sample for EOR tests were supplied by a local oil company. The oil specific gravity was 0.86, and its viscosity was 5.5cP at 25°C, and 3.1cP at 85°C. A Berea sandstone core was used for recovery experiments. The core sample had relatively good porosity (20%) and permeability (90mD). The rock pore volume was 15.5mL.

Figure 2 presents the base mud viscosity, as well as WLG mud viscosity under varied shear rates. The tests were conducted at room temperature of 25°C. On this log-log plot, mud viscosity declines almost linearly at higher shear rates. This reveals that mud is a non-Newtonian fluid that abides by the power law. It is also obvious that even a small dosage of WLG leads to significant increase in mud viscosity.

Figure 4 compares the properties of WLG mud and CMC mud. The addition of CMC resulted in mild increases in mud viscosity and yield point, while WLG is much more effective in boosting mud viscosity. The mud containing 1g/L WLG was heated to 75°C for 30 minutes, in order to test the stability of WLG mud at elevated temperature. The test data in Figure 5 shows WLG mud has good stability at high temperature. The mud properties after heating were almost unchanged.

The mud samples were also tested for long-term stability under high temperature. The mud samples aged in a sealed steel cell at 85°C for 6 hours, then cooled down to room temperature. Mud properties were measured, and the results are presented in Table 3. For the mud containing WLG, both mud YP and AV increased after aging. This is probably due to the formation of weak gel at high temperature. On the other hand, the mud containing CMC showed reduction in YP and AV after aging. Comparison shows WLG is resistant to long-term heating.

A good mud thickener must maintain stable viscosity under the attack of sodium and calcium ions. NaCl and CaCl2 were mixed into WLG mud and the mud properties were measured. The test results are shown in Figure 6 and 7. It can be seen that WLG is resistant to both sodium and calcium ions. The key parameters (YP, AV and PV) all remained quite stable after addition of salts.

3.2. Results of Rheology and Recovery Experiments

WLG was mixed into water at varied dosages, and the solution viscosity was measured. Figure 8 presents the effect of WLG concentration on fluid viscosity. These tests were all conducted at 85°C. The linear trends on log-log plot reveal that WLG solution is a non-Newtonian fluid [12]. It is obvious that WLG effectively boosts viscosity, even at a low concentration. It was also observed that WLG quickly dissolved in water.

According to a previous study, HPAM is very sensitive to calcium ion [12]. WLG is less sensitive to calcium, as seen in Figure 10. For the tests in Fig. 10, the WLG concentration was 3g/L, and no sodium was added. WLG in fresh water demonstrated a viscosity of 252cP under shear rate of 10/s. After calcium was added, the viscosity declined to 201cP at the same shear rate. However, the viscosity did not decline further at higher concentration of calcium.

The loss of viscosity at high salinity is a common phenomenon for polymers. It is believed that polymers are relaxed in fresh water, but shrinks and coils at presence of monovalent and divalent ions. Shrinkage of polymer chains leads to reduction in viscosity [2]. According to the results in Figures 9 and 10, welan gum shows excellent resistance to monovalent and divalent ions. This indicates welan gum may be suitable for polymer flooding in high salinity reservoirs.

WLG solution containing 3g/L WLG, 100g/L NaCl and 50g/L CaCl2 was sealed in a container at 85°C for 6 hours. The viscosity data is presented in Fig. 11. It is clear that viscosity of WLG solution reduced after aging. For instance, at the shear rate of 10/s, viscosity dropped from 175cP before aging to 125cP afterwards. This is possibly due to breakage of polymer chains under high temperature. However, WLG solution still maintained relatively high viscosity after aging.

The first recovery test was to establish OOIP and the baseline recovery with water flooding. The injected brine contained 150g/L NaCl and 50g/L CaCl2. The injection rate was controlled at 0.1 mL/min. The OOIP was found to be 10mL. After 5 pore volumes of injection, 6mL of oil was produced, equivalent to 60% OOIP. The second test injected WLG solution containing 1g/L WLG at the same injection rate. This low concentration of WLG was chosen because in field projects, oil companies must reduce the costs of chemicals to achieve maximum profits. After injection of 3 pore volumes of polymer fluid, WLG recovered 72% OOIP. Subsequent injection of WLG fluid did not further improve recovery. This indicates that WLG has positive effects on oil recovery. Injection of WLG also reduces the time required to reach residual oil saturation. Another recent study also confirmed WLG is more effective than HPAM in enhancing oil recovery [13].

It cannot be denied the price of welan gum is much higher than CMC, HEC, and HPAM. However, welan gum demonstrates much better resistance to high salinity and high temperature. On the other hand, welan gum in the market is produced for food industry at a very high grade. Field applications of drilling mud and polymer flooding require lower grade products that cost much less than food grade. Moreover, field implementation will require production of polymers at a large scale, which also helps to reduce the cost of welan gum. 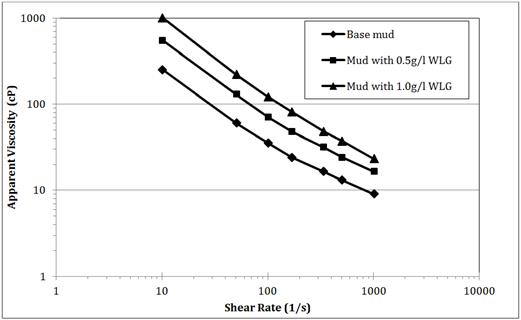 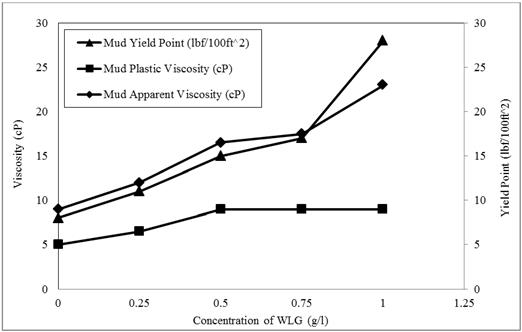 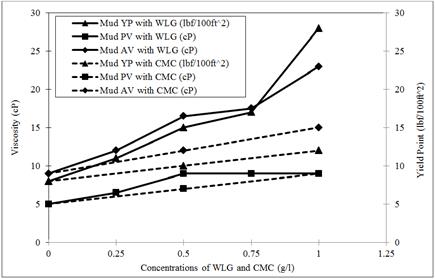 Figure 4. Comparison of properties of WLG mud and CMC mud. 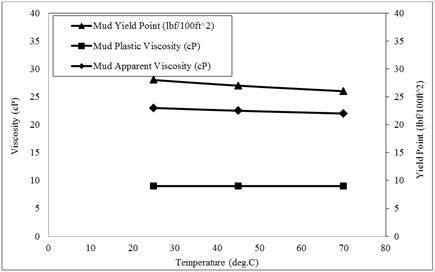 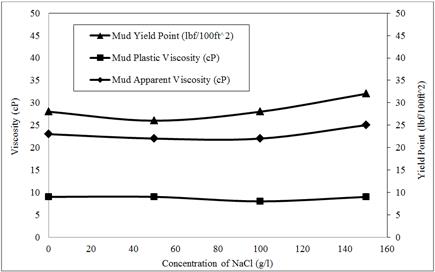 Figure 6. Properties of WLG mud at varied concentrations of NaCl. 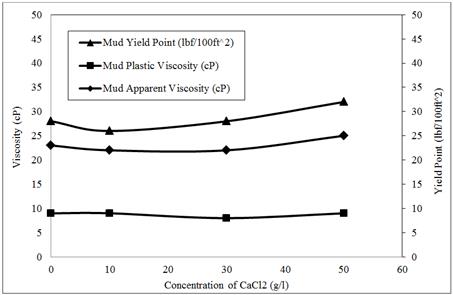 Figure 7. Properties of WLG mud under varied concentrations of CaCl2. 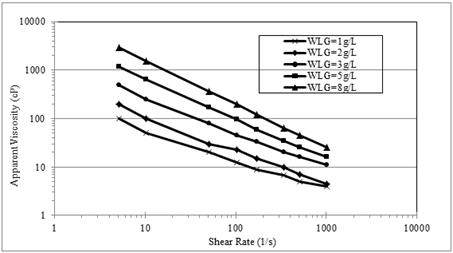 Figure 8. Effect of WLG concentrations on viscosity of WLG solution. 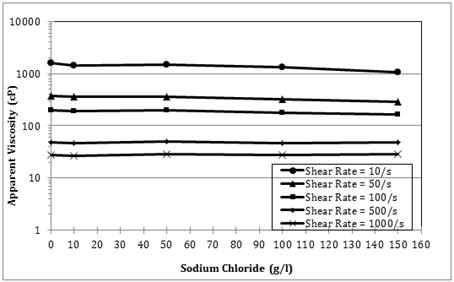 Figure 9. Effect of sodium ion on viscosity of WLG solution. 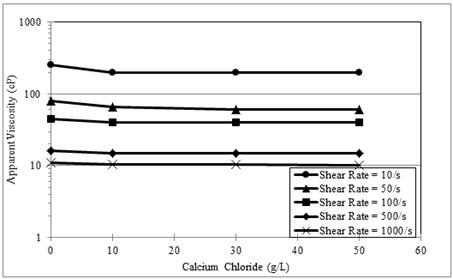 Figure 10. Effect of calcium ion on viscosity of WLG solution. 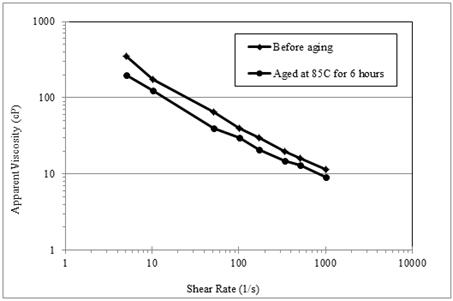 Figure 11. Effect of aging on viscosity of WLG solution.

The author hopes to acknowledge the state of Shandong for providing research fund through Tai Shan Scholar program.