Abstract: The Razzak oil field is located, together with several other oil fields, along the Qattara - Alamein Ridge in the north Western Desert of Egypt. This ridge comprises the main hydrocarbon producers in the Alamein Basin, with several closed structures, which are in a favorable geological setting with respect to hydrocarbon prospectively. Razzak field was discovered in March, 1972 it is producing from four different horizons, Abu Roash "G" (AR/G), Bahariya, Aptian Dolomite, and Alam EL Bueib BA-1 marker [3]''. The seismic data processing is the important step to get rid of the unwanted data. (noise data) by applying different flows, so that we can get enhancement of the signal to noise ratio. There are many steps applied on data, one of these steps is FK filter which is a double edged weapon step it may be destroyed all signal and hidden the reflectors, or enhanced the signal by removed the noise especially linear noise. For that we must be carefully when applied FK filter process on seismic data to avoid occur distortion on data and consequence missing interpretation. In this paper showing the heavy effective of FK filter on seismic data in Razzak oil field when applied it, and display the result obtained. We applied FK filter with two different cutting techniques in four different processing flows to show its effect on seismic data. The seismic data used in this paper is represented 2D seismic line in Razzak field it is Razaak 18- 87 in SEG Y format. Vista software is used to accomplish seismic processing flows which applying on it.

The Razzak field lies on a northeast plunging anticline in a large faulted structural nose among one of three conspicuous mapped anticlinal features within Razzak area. These three anticlinal noses are aligned with the Alamein-Yidma trend on the Cenomanian and Aptian seismic horizons, having the same trend of the Syrian Arc system which continued during the Eocene time [9,7]'' The first anticlinal nose lies at the extreme southwestern part of the Razzak area, with two producing wells (RZK-4 and RZK-12) drilled on its crest in West Razzak. The second anticlinal nose trends northeast and lies on the extreme northeast part of the study area in East Razzak. The third anticlinal nose is the most important structural feature for hydrocarbon trapping and oil production in the Razzak area. Ten wells were drilled on both its crest and flanks. This trap acquires the form of a northeastern plunging anticlinal nose lying on the central part of the Razzak area. This nose is dissected into several blocks by two sets of intersecting normal faults. These two sets of faults are trending northwest-southeast and northeast-southwest following what are known as Erythrean and Aualitic trends. Most of the northeast-southwest faults are parallel to the plunging axis of the anticlinal nose. The three structural culminations are West Razzak, Razzak Main and East Razzak. Show in figure (2), these culminations are on the downthrown side of a major northeast-southwest trending fault which has both reverse and normal thrown along its length. 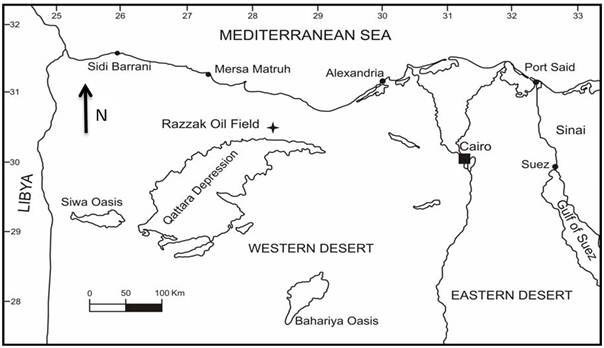 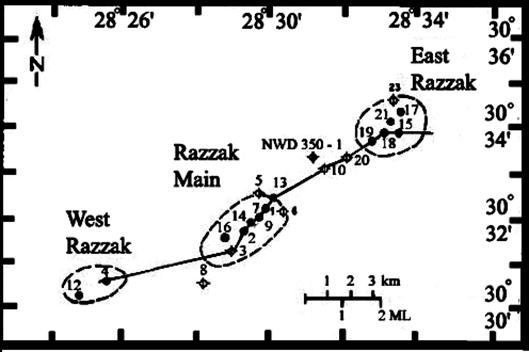 Seismic data record in time domain contains coherent linear events that can be separated in the FK domain by their dips. This allows us to remove certain types of unwanted energy from the seismic data. The coherent noise in the form of ground roll, guided waves and side scattered energy commonly obscure primary reflections in recorded data. These types of noise usually are isolated from the reflection energy in the FK domain. From the field record as showing in figure (3), note how the ground roll energy can dominate the recorded data. Ground roll is a type of surface waves that propagates along the ground surface and it characterize by low frequency and large amplitude. Typically ground roll is suppressed in the field by using a suitable receiver array. [12]'' 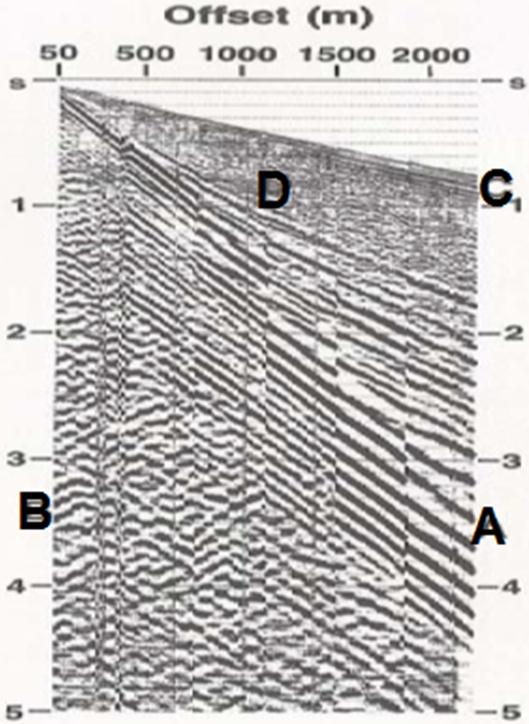 Figure 3. Field record obtained from a walk away noise test. [12]'' 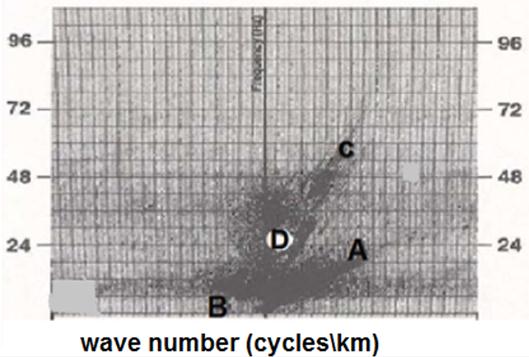 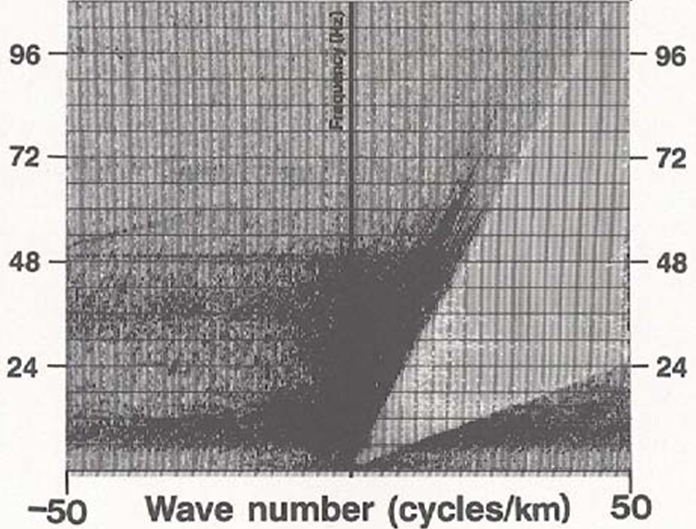 Figure 5. The FK spectum of the field seismic data after remove ground roll. [12]''

FK filter is one of quality control tool distinguish between the signal (wanted energy) and noise (unwanted energy). The FK spectrum can be used to limit both the temporal and spatial frequencies, any editing usually being done by marking part of the spectrum for removal and transforming back seismic data into the time domain. FK filtering can be also used at the end of the processing sequence to remove other sorts of noises such as multiples. [4]''

2.1 Kill trace process must be done; it used to determine the traces within the seismic line that are bad. In some cases it may still to look at every shot record to find those traces that contain spikes or noise trains that are unrelated to the true seismic data. The seismic traces that contain noise are deleted to avoid their negative effect on the final stack section. Seismic trace which contains noise must be dead from the original recording and need to tell the processing system to zero all of the samples in the trace or omit that trace or traces completely from the seismic record.

2.2 Mute trace, first top mute is known as ramping or tapering the data and typically zeroes everything above the line picked, another type of muting is surgical mute a taper off and taper on over a small region of the trace to remove spikes and noise bursts, if there is record contains a lot of spikes which apply automatic spike edit and then the record has had an additional pass of interpolation to fill in most of the missing data. The three type of muting is bottom or down mute which remove noise at bottom seismic record and typically zeroes everything below the line picked.

2.4 Exponential gain step, the seismic energy source imagine a sphere of energy expanding from the seismic shot in all direction in subsurface, all of the energy initially contained in the shot is spread out over a larger and larger area as time passes. The loss of amplitude with distance travelled by seismic wave occurs in three main states spherical divergence, inelastic attenuation, and friction. The amount of seismic energy decrease each time a boundary in acoustic impedance is crossed since proportion of energy is reflected. [5]''

Where, S (t): is the seismic trace

R (t): is the reflectivity series

W (t): is the seismic wavelet

2.6 Statics shift is corrections are made to determine the effect on travel times of irregular or changing topography and near-surface velocity variations. If this process is not made, reflections on adjacent traces may be shifted in time and resulting wrong positions of events. These corrections applied to fixed source-receiver geometry for a given survey. From that, able to detect the lateral variation in thickness of the weathering layer, change in depth, their composition and also estimate the change in seismic velocities, by use this information able to establish a sub-surface model of the weathering layer, to move every shots and geophones to new datum.

In this paper we apply four different processing flows on seismic line of Razzak 18- 87 with different parameters to display the effect of these flows specially FK filter on seismic data.

This flow consists of three steps only input, FK filter and output respectively, the flow window view in figure (7).

The data ordered by Field Station Number, as display in figure (8). In FK filter step, uploaded FK file which made on Vista software. The FK attributes parameters used in this step are power amplitude equals "1", smoother traces equals "7" and smoother frequency equals "5" without applied restorable AGC. The FK window viewed in figure (9). 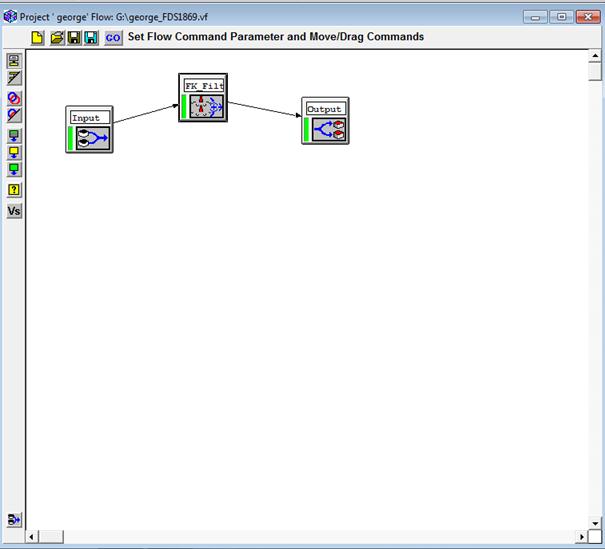 Figure 7. The seismic flow window which applied on data. 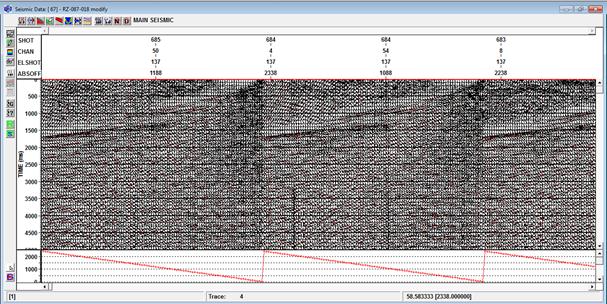 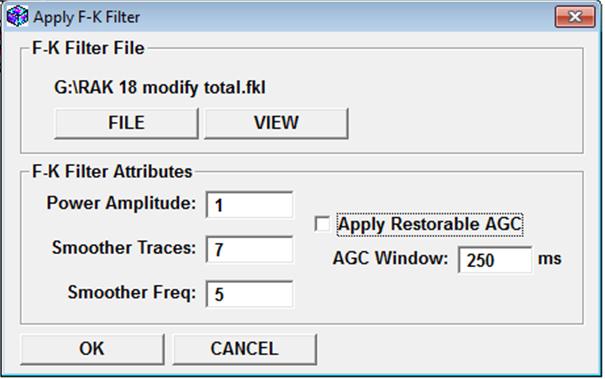 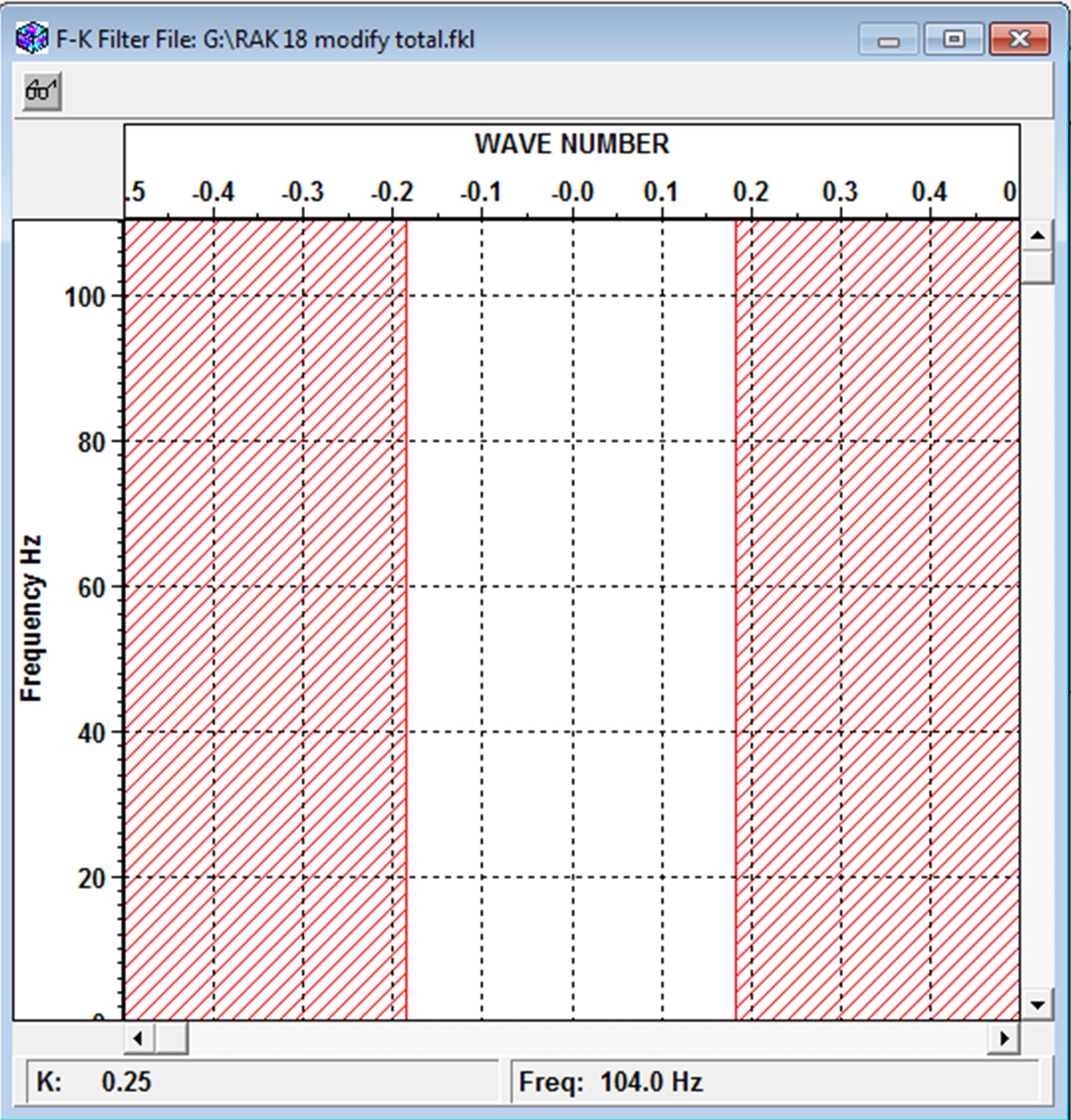 Figure 10. The FK file which used in this flow. 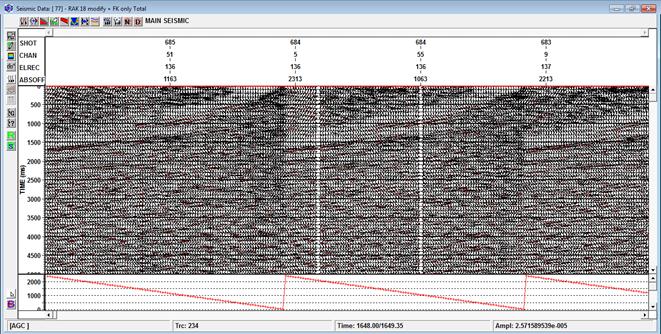 This flow consists of three steps performed like the first flow. These steps are input, FK filter and output. The flow window viewed in figure (7). The difference is the used of the new FK file (RAZ 18 modify shot 311. fkl); figure (12); instead of the FK file that used in first flow. The output result obtained; figure (13). 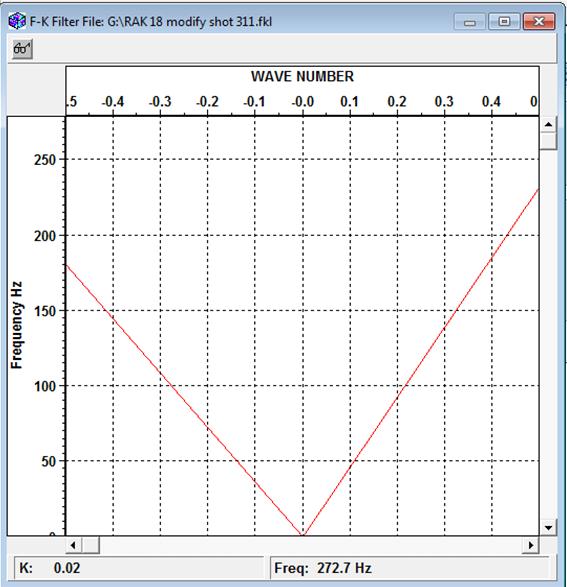 Figure 12. The FK file which used in this flow. 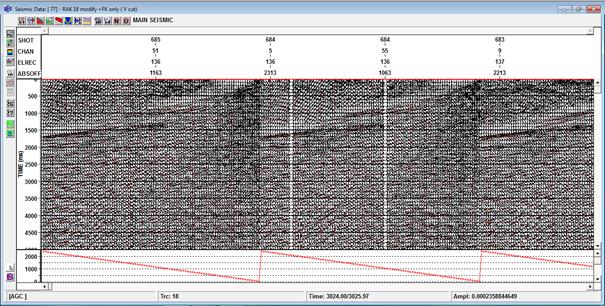 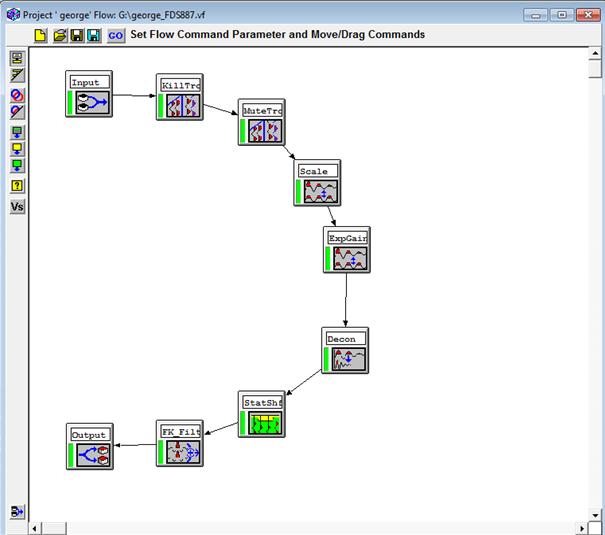 Figure 14. The seismic flow window which applied on data.

Input data is Razzak –087- 018 in standard domain (time domain) the time range from 0.00 to 5000.00 ms, sample rate 4.00 ms and the total trace is about 98826. The data ordered by Field Station Number. As displayed in figure (8). Kill trace step is applied by uploading the file of Kill trace made in vista software, In Mute traces step we uploading file of Mute trace made on vista software. Then applied top mute header and bottom mute header without applied surgical mutes. Mean scale is picked to be applying on this data without applied signal bandpass filter. The exponential gain is applied on seismic data by using constant equals "1". The predictive deconvoltion is applied on the data as deconvolution type with operator length equals 120 ms and prediction lag about 36 ms without applied operator taper. The static shift is done by aiding of the header static by choosing the elevation of receivers from the header on seismic line. In fk filter step we used the same file of fk filter and the same parameters also which used before in the first flow. The output obtained; figure (15) 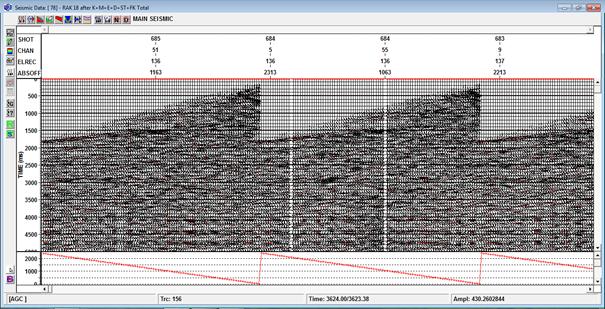 The fourth flow is performed like the pervious flow (third flow) with the same steps and the same orders. The flow window viewed in figure (14). In this flow, for the eight step of FK filter re-uploaded anther FK file instead of the file used in third flow. The new FK file (RAZ 18 modify shot 311. fkl) showed in figure (12). The output obtained from this flow display in figure (16). 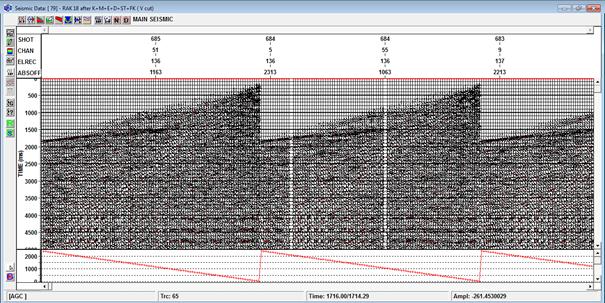 The Razzak line 18 in SEG Y format used to apply four different processing flows on it. The processing flow made on Vista software. The first two flows applied only FK filter step on seismic line and the last two flows applied FK filter step with other different steps. The results obtained from these flows are totally different from each other. Although the first two flows are the same steps but the results are different and the third and fourth flows are the same steps but the results are different also. The output results from first and third flows; figure (11) figure (15) are destroyed the signal and most details in this seismic line due to heavy cutting, for that it did not improve data. One way to reducing the effect of heavy FK filter is to mix back some of the original data (unfiltered) with output. On the other hand the output results from second and fourth; figure (13) figure (16) flows give a good view image of seismic data than obtained from the first and third flows, that due to remove some linear noise from data, for that they add an enhancement on the resulting data. From that FK filter had essential effect; it played an important role on improvement the quality of data or destroy and hidden it.