Abstract: Many different processes are used to treat raw natural gas to pipeline quality. The sulfur is commonly present as an impurity in fossil fuels. Magnetic field is applied in a fluidized bed which contains nano activated carbon to investigate hydrogen sulfide elimination, in this paper. Sulfur removal in this way is presented experimentally and theoretically. The rate of mass transfer is introduced as function of gas temperature, amount of balls covered by nano carbon tubes, initial concentration of hydrogen sulfide, gas flow rate and also, magnetic field. The experimental data are presented and compared with the model results. The effect of hydrogen sulfide in the inlet sour gas on the mass flow rate in investigated in this paper. In addition, the effect of porosity percentage of catalytic bed on the hydrogen sulfide content of outlet gas is evaluated in this paper. The outlet concentration below 4 ppm is acceptable result due to commercial rules. The experimental data are in higher values of hydrogen sulfide comparing with the ones from modeling data.

There are different types of sour gas. The sulfur element and related compounds approach sweet gas to the sour gas. The sulfur damages units and pipe lines, severally. In addition, the sulfur causes to the catalysts poisonings [1-5]. Burning fuels, the sulfur is released as sulfur dioxide—an air pollutant responsible for respiratory problems and acid rain [6-8]. Environmental regulations have increasingly restricted sulfur dioxide emissions, forcing fuel processors to remove the sulfur from both fuels and exhaust gases. The cost of removing sulfur from natural gas and petroleum in the United States was about $1.25 billion in 2008. In natural gas, sulfur is present mainly as hydrogen sulfide gas (H2S), while in crude oil it is present in sulfur-containing organic compounds which are converted into hydrocarbons and H2S during the hydro desulphurization [9-13]. In both cases, corrosive, highly-toxic H2S gas must be converted into elemental sulfur and removed for sale or safe disposal [14-16]. Formation fluids that contain Hydrogen Sulfide - By-product from anaerobic bacterial action on sulfur compounds present in the mud (i.e. Sodium Sulfite) - Thermal degradation of mud additives containing sulfur (i.e. Lignosulfonates) - Chemical reactions with tool joint lubricants containing sulfur [16-20].

H2S is a weak acid that can go through the following 2 stages when dissolved in water or water based mud [21];

both steps (1 and 2) can go back and forth depending on the pH.

Sour gasses which contain different amounts of hydrogen sulfide are reactor bed feed. Two gray 20 lit of volume pressurized vessel contain sour gas can be joint to the experimental line. However, both feed vessel can’t be used simultaneously. Plexiglas vessel with inside diameter of 8 cm and height of 60 cm is the reactor vessel. 1 cm from bottom and 1 cm from the top of inside height of vessel is without packing contains distributor and holders. In 4 cm of efficient volume of vessel plastic balls with 2.5 cm in diameter which are covered by nano activated carbon tubes are used as the packing.

Pre humidification is done to enhance the amount of adsorbed H2S on nano balls. Nano carbon tubes are contacted with moist air (RH=100%) for 20 min before using in the reactor. This time is longer for current activated carbon but nano carbon is applied in this study and humidity adsorption occurs in shorter contact time. This step is an exothermic process. Humidity helps oxidation of H2S and also increases the nano carbon capacity for H2S adsorption.

For laminar flow, where only viscous drag forces come into play, (NRe, p < 20), experimental data may be correlated by means of the Kozeny-Carman equation, the Equation 3 [1]:

Note: According to chemical engineering hand book [5], the factor of 150 was originally given by Carman as 180 for the case of laminar flow. Ergun later suggested a better value was 150 when the particles are greater than about 150 mm in diameter.

In addition, for highly turbulent flow where inertial forces predominate, NRe, p (>1000), experimental results may instead be correlated in terms of the Blake-Plummer equation, Equation 4 [7]:

The amounts of hydrogen sulfide catch from branch line defined the process performance. Inlet sour gas contains 148 ppm H2S, temperature of 30 C is fed into the catalytic bed with 0.48 m3/m3 porosity and magnetic field occurred with current of 1 A.

3.1. The Effect of Bed Porosity on Sulfur Elimination

Three different amounts of porosity are achieved by three numbers of balls, 4, 5 and 6 balls. In this case higher porosity presents lower amount of nano carbon tube and also lower amount of mass transfer surface area. In the fluidized bed the channeling malfunction is not occurred and all packing’s are moved with the gas velocity and gas is contacted to solid catalyst easily. There is not any unused surface area. So, the increase trend of C is predicted by increase in the amount of porosity. Outlet concentration below 4 ppm is acceptable result due to commercial rules. Experimental data are in higher values of hydrogen sulfide comparing with ones from modeling data. Figure 1 shows the trend of outlet hydrogen sulfide concentration with bed porosity, Vnb/V. 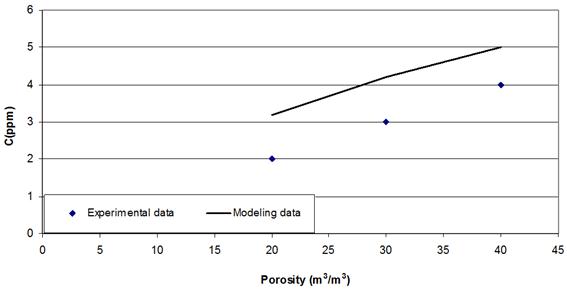 Figure 1. The effect of porosity on outlet hydrogen sulfide.

3.2. The Effect of Initial Concentration and Gas Flow Rate

Figure 2 shows the effect of gas flow rate and initial concentration of hydrogen sulfide on values of mass transfer flow rate. The increase in amount of gas flow rate increases the value of mass flow rate. This may indicate on the high adsorption capacity of nano carbon tubes and high surface area in fluidized bed. At 0.22 m3/min value of gas flow rate the increase in amount of initial hydrogen sulfur (0 to 0.013 mol/m3) increases the flow rate initially and then the relatively decrease trend in flow rate is observed. This trend is similar for both 0.27 and 0.33 but the peak of graph happens in lower amount of initial hydrogen sulfide. This shows the limited value of carbon nano tube capacity. Also, the positive effect of turbulence on decreasing the gas phase resistance is observed. The higher value of driving force doesn't show the significant effect on increase of mass transfer rate when the capacity of nano carbon is limited. However, the theoretical values are predicted in lower ranges than values of experimental data. This difference may relate to calculation of mass transfer coefficient. The average mass transfer coefficient for gas phase is only considered in the relation while there is mass transfer coefficient for liquid film, actually.