Abstract: The possibility of constructing a dynamic neurogoniometer based on a rotary mechanotronic system controlled by stepper motors and a number of controlled reflectors on the galvanometric scanners is considered below. The control is performed by a PIC-controller, but there is also another low-cost construction using stepper motors control modules in a CAMAC standard. There are several designs based on a universal Fedorov stage and the apparatus for stereotaxis. The above schemes can be used both for working with the fixed histological slices and for in vivo or in situ analysis, particularly of the living brain slices. An example of application of such devices is described in this paper.

There is a current practical need in designing of the automated systems for goniometry of the neural structures, evidenced by the numerous works implicitly using the methods of goniometry and vector approaches. The studies on the electrically induced development of the neural structures [1] include either the angular measurements in the course of the neurite-cone growth or apply the vector method for indication of the neurite growth direction with the angular characteristics represented at a circular diagram additively according to the distribution of the axonal angles [2]. Morphological studies on the dendrite distribution magnitude anisotropy in individual brain structures, such as olive [3], apply additive vector-angle characteristics, while physiological studies [4] use polar vector matching histograms for predicting somatic neuronal polarization from their morphological parameters and the vector matching between the former and the latter. The angle measurements in [5] illustrate the conclusion that magnetic susceptibility threshold of the neurons does not change with the axonal angles, while [6] describes the mechanism of the microtubules' angle changing in the dendrite branching point, underlying the dendrite morphogenesis visualized by the angle measurements on the micrographs. Thus, the angles in neuron morphometry can be considered not only as a morphological criterion, but also as a measure of physiological ordering during the neural structure genesis as well as an indicator of its plasticity potential due to the correlation between the angle characteristics of the neuron general orientation with their mobility which can be also represented by the individual neuron migration angle [7].

Neuron plasticity may thus be regarded as a correlate of the electrophysiological activity, since many papers concerning synaptic excitability regulation, i.e., finally, the synaptic plasticity, also perform angle measurements (for example, see [8], where such measurements are carried out on Nkcc1 -ShRNA-expressing neurons). In some cases morphofunctional vector-angle mapping requires 3D representation in spherical coordinates where the vector length and the polar angle indicate the component values and the direction to the signal transduction target, respectively [9]. In this way a problem of neurophysiological signal transceiver commutation between the neural structures can be successfully solved using the same principles that are applied for radiation patterns in radio engineering.

Similar angle measurements are performed for glia, but in the case of the glial measurements it is more suitable to implement the "additive" approach - fast Fourier transformation of the corresponding micrographs [10,11], which can provide data on the orientation, statistical ordering and anisotropy of the neural structure. It is sometimes theoretically possible to perform cooperative data processing as a result of hybridization of the chaotic glial networks and the perceptron structures [12], but such attempts are still a kind of speculations and thus do not allow to postulate a successful application of the single morphostructural unit goniometry methods. However, considering histological colocalization of the neurons and glia, it is sometimes possible to perform correlation neuro-glial goniometry. 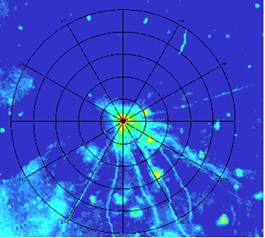 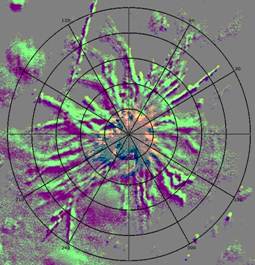 Fig. 2. Neuroglia cell goniometry (isolated astrocyte), also known as "neurogliogoniometry" and, in this case, as "astrocytogoniometry".

Thus "neurogoniometry" if developed can be successfully used for the study of: the neuron growth, morphogenesis and migration; neural structure plasticity; morphophysiological reconstruction of the bioelectric signal radiation patterns; interpolational reconstruction of the microtubule dynamics; functional neuron-glial relationships; isotropy / anisotropy of the neuron and glial structure, etc.

To date there are no special systems for neurogoniometry, as well as for complex automated goniometry of biological tissues in general, except for the system for light scattering goniometry in biological tissues [13], which does not belong to the area of either neuromorphometry or even morphometry as a whole. However, goniometric measurements using a microscope have long been applied in the industry [14] and due to the development of mathematical morphometry [15] they can be easily considered as accurate neuromorphological methods which allow to reveal the relationships in the neuron populations considering their development and neuroplasticity. At the same time many mathematically-morphological methods regarded as complete analogs of the neuron goniometry in fact can not be considered in this way. One of the most remarkable methods for morphometric brain analysis - radial morphometry, although allows to study vector and radial orientation, predominantly is used at the anatomical level instead of the single neurons in situ or in living brain slices. Furthermore, the vast majority of the known methods fail to perform the analysis of single neuron orientation in 3D-structures, which requires the Euler coordinates or even more complex approaches for appropriate computer representation, but their description is beyond the scope of this article. 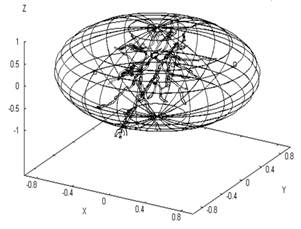 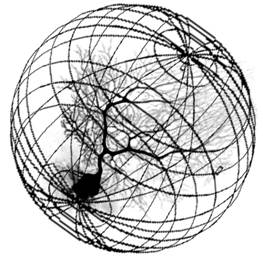 Fig. 3. A scheme for neurogoniometry in spherical coordinates.

The above object is best described in either spherical or polar (or elliptic) coordinates. A sketch of a spherical coordinate application to neurogoniometry is shown in Fig. 3. 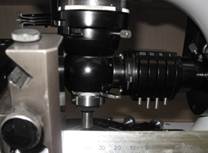 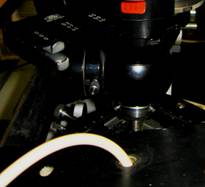 It is sometimes convenient to distinguish between "neurocytogoniometry" (e.g. goniometry of neurons) and "neurogliogoniometry" (e.g. goniometry of the glial cells) in the frame of the neurogoniometric approaches. The two types of such bioimaging neurogoniometry are shown in Fig. 1 and Fig 2. The above data leave no doubt about the morphological types of the neural tissue cells. This analysis was performed on the microscopic samples of different neural tissue cells after various methods of specific staining.

However, the above methods were not focused on a direct real-time data aquisition during the microscopic studies. This purpose requires the design of an automated goniometric setup capable of being switched to the microscope and provided with the necessary registration equipment. The development of such device involves the design of the sample positioning system and controllers of the stage position with the sample, as well as the development of a special software for 3D measurements supporting video recording file formats to enable the observation of the angular characteristic dynamics upon the staining of tissues with the vital dyes.

This paper considers the possibility of designing a dynamic neurogoniometer based on a specialized rotational mechanotronic system controlled by the stepper motors and a system of controlled reflectors with galvanometric scanners. There were several types of the setups based on 3-, 4- and 5-axis universal Feodorov stages [16-20] and stereotactic apparatus; and also it describes the possibility of the planar electromechanical goniometric stage designing for the "real time on-line neurogoniometry" (Fig. 4 a,b). The described approach can be applied either for working with the fixed samples or for in vivo or in situ analysis, particularly for the study of the living brain slices. 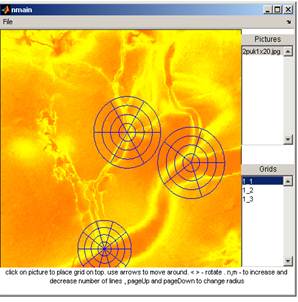 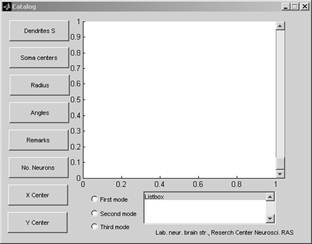 3. Software and Hardware for Imaging and Angular Maesurements Based on Neurogoniometry

It has been developed a system for registration and analytical processing of the data obtained from the goniometric measurements on the histological slides and the living brain slices. This device includes a microscopic image registration system with a rotating stage based on the modified ZEISS microscope shown in Fig. 4 and an open source software for the image processing. The open access for the code is provided in order to and encourage our colleagues to use and even to modify it for their experimental setups when they apply a microscopic image registration systems different from that described above.

An example of the Neurogoniometer GUI window during the search of the branch points and recording the relevant targets in the memory is shown in Fig. 5. An auxiliary GUI CATALOG 2.1 (Fig. 6) was also developed for working with the datasets, capable of performing the following functions:

• "Soma centers" – the results of the circle centering (target) for the measurements performed either manually or according to the cell absorbance or another morphometric parameters using the pattern recognition, particularly with the neural networks

• "Angles" – angular characteristics, or the results of the planar neurogoniometry (in the case of 3D neurogoniometry the angular measurement results are represented in the Eulerian coordinates)

• "No. Neurons" – the neuron numeration which can be entered either manually or automatically from the morphometric data after binarization

• "X Center", "Y Center" – the orientation / anisotropy parameters for the data analysis and representation without a circular diagram (for this case see the "First mode", "Second mode" and "Third mode" options);

• "Third mode" – 3D stereogoniometry mode using a rotating Fedorov stage (Fig. 7). This mode allows to perform the neural structure morphogenesis monitoring on the living brain slices [21-27], refraction tomography [28] and the studies on the effect of the angular orientation on the neuron morphology, and hence, the image types obtained and characterized with the GUI. Similar setups can be designed using cryogenic electron microscopic media and electron microscopic holders [29];

• Coordinate-graphic zone of visualization and the correlation / relationship analysis, which allows to make a comparative analysis of the parameters from the other modes ("Soma centers", "Dendrites S", "X Center", "Y Center", "Angles", "Radius") with a precise reference to the "No. Neurons" mode and classification by the "Remarks". 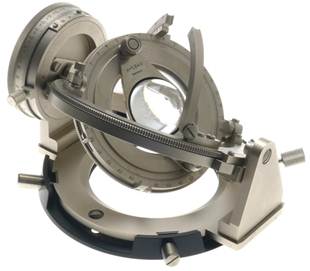 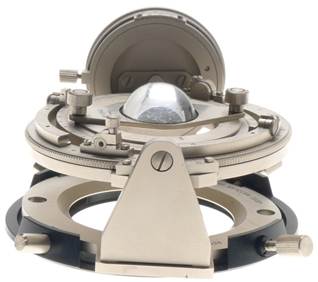 It has also been developed a software with the GUI in Visual Basic for either morphofunctional or morphophysiological analysis of the raster data spatial distribution in the neural tissue obtained from the electrophysiological setups using the neurogoniometric approaches to the distribution measurements in the Eulerian coordinates or on the planar rotating stage. The above technique allows to analyze the angular neural structure activity distributions with the subsequent barcoding [30]. It is also possible to combine these measurements with redox mapping, including one under the photochemical sample treatment [31]. Later it will also be developed a "histochemical MEMS-chip" with a selective staining for the purposes of the spectrozonal or multispectral analysis [32]. We also consider the prospects of the precious neurogoniometry with the electrophysiological one-to-one mapping based on the ion channel analysis data using a specially constructed lab-on-a-chip [33].

We thank the staff of the Department of Metrology and Measurement Techniques in the Institute of Geochemistry and Analytical Chemistry (GEOKHI RAS) for providing all the details and tools needed for constructing of the early setup applicable for the angular measurements on the neural tissues.