Gratings are straight, parallel, and equispaced grooves. As a basic optical component, it can be used in various optical technologies, such as moiré interferometry [1], Geometric Phase Analysis (GPA) method [2] and various microscopic moiré methods [3], to measure the surface deformation on the object. Currently grating fabrication methods include holographic lithography method [4], nanoimprint lithography method [5], electron beam lithography (EBL) method [6], and focused ion beam (FIB) etching method [7], etc. Holographic lithography method using an interference of two coherent beams and exposure of the photoresist under the interference path to fabricate the grating, However, the complex arrangement of optical components has made it very difficult to put into practice, and has accordingly restrained its wide application. Nanoimprint lithography method requires a template to fabricate the grating. EBL and FIB etching belong to the direct writing technology that can be fabricated micro- and nano- gratings, however, low throughput and high cost make them impractical for commercialization.

As a major achievement of the 20th century science and technology, laser has been widely used due to its properties such as high peak power, strong direction, and good coherence. The energy density of nanosecond laser is very high (~1J), and recently it has been used to fabricate microstructures directly on the surface of materials such as metals, semiconductors, ceramics [8], etc. Also, the nanosecond laser can fabricated micro-gratings on the surface of the specimen without mask, which provides an alternative way of grating fabrication and its corresponding research is of significant importance.

When a high-energy laser beam irradiates to a material, the temperature of spotted surface increases sharply due to the absorption of the laser energy. The material begins to melt after the temperature of the spotted area reaches its melting point. And the material begins to evaporate if the temperature continues rising and reaches the latent heat of material ablation with further absorption of laser energy. Generally, there are three regions when the high-energy laser irradiates to the material, as shown in Fig. 1. 1) A plasma region with high temperature and density (Pla) formed on the surface of the material; 2) A melting center region of the spotted material (Mel); 3) A heat affected zone (HAZ) under the Mel region. 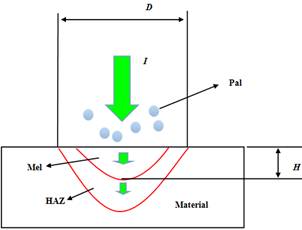 The damage threshold of a material irradiated by a laser beam is one of its intrinsic properties. When a single-pulse laser irradiates on a material, the damage of the material is mainly associated with the energy of laser. The relationship between the laser intensity (I0) on the surface of the specimen and its single-pulse energy E is [10]:

where ω0 is the waist radius of the laser beam (mm). And the etching diameter can be determined as

where D indicates the etching diameter and Ith is the threshold of energy density(J/cm2). Substituting Eq. (1) into Eq. (2), we can get Eq. (3) 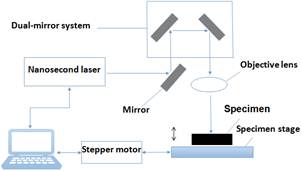 Fig. 2 is a schematic diagram of a nanosecond laser processing system (Continuum) with wavelength of 532nm, pulse width of 500ns, pulse frequency of 1 KHz, and maximum pulse energy of 1 J. The laser beam path is adjusted by a dual-mirror system which is controlled by a computer. Note that software was developed to move the beam spot on the surface precisely. The specimen stage is controlled by a stepping motor and can move vertically, thus the specimen can be focused by the laser beam through an objective lens.

In order to obtain the etching parameters when a single-pulse laser beam irradiates on the specimen, lines were etched by the nanosecond laser system with different pulse energy ranging from 4.9 mJ to 80 mJ. Micro-structural morphology and widths of the etched areas were observed and measured by an optical microscopy. In the end, suitable parameters were chosen to fabricate micro-scale gratings. 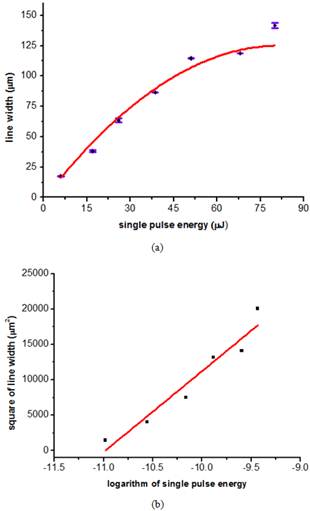 Fig.4 shows optical images of gratings using laser pulse energy of 51μJ, a constant scanning speed of 10mm/s. Fig. 4(a) shows the image of a horizontal grating and its average pitch is about 30 mm. A good quality of grating is shown in the etched region. The lower pitch (about 25 mm) of grating is shown in Fig. 4(b). The overlap occurs between grating strips. The quality of grating is poor and the structure is not clear. Fig. 5 shows the SEM image of the grating of Fig. 4(a). It is observed that grating strips is clearly, and the distorted nano­structures were formed. 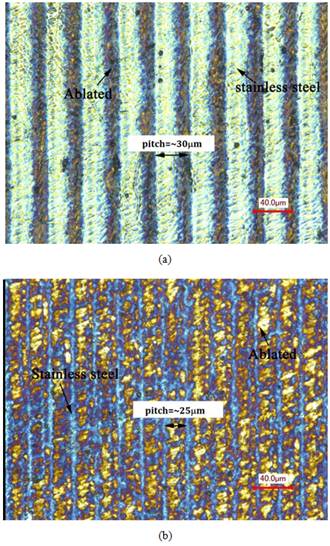 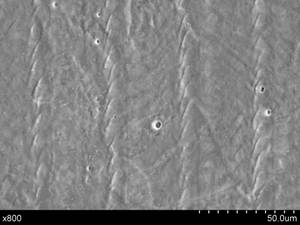 Figure 6. The distribution of Gaussian energy density along with the distance 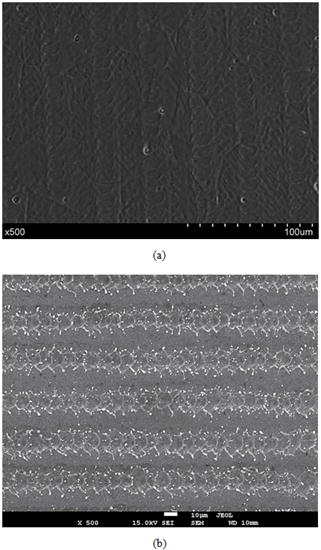 In this paper, a nanosecond laser system was established and the fabrication method for micro-grating was studied. The mechanism of laser proce­ssing on material surface was theoretically analyzed. The damage threshold (Ith=0.189 J/cm2) and laser beam waist radius (ω0=75.6 μm) with respect to stainless steel were derived by experiments. The experimental results have demon­strated clear grating with low pitch (~30 μm) can be fabricated using this method. The difficulties in the fabrication of high frequency grating by nanosecond laser direct writing are analyzed. This method of grating fabrication is faster and more convenient than other methods. Moreover, the fabrication of high frequency grating needs further researches.

The authors are grateful to the financial support by the National Natural Science Foundation of China (Grant Nos. 11232008 and 11372118).