Abstract: In this paper, an optimal control for Hamiltonian control systems with external variables will be formulated and analysed. Necessary and sufficient conditions which lead to Pantryagin’s principle are stated and elaborated. Finally it is shown how the Pontryagin’s principle fits very well to the theory of Hamiltonian systems. The case of Potryagin’s maximum principle will be considered in detail since it is capable of dealing with both unbounded continuous controls and bounded controls which are possibly discontinuous.

It has been essential for many physical systems which are governed by differential equations to be controlled in such a way that a given performance index would be optimized. Large savings in cost have been obtained by a small improvement in performance. The optimal control problem which will be formulated will be the so called Bolza problem [1] with the added condition that the control variables lie in a closed set.

[2] in his paper of Optimal control of stochastic dynamical systems developed existence of stochastic optimal controls for a large class of stochastic differential systems with finite memory is considered. [3] established a feedback control law is developed for dynamical systems described by constrained generalized coordinates. They revealed that for certain complex dynamical systems, it is more desirable to develop the mathematical model using more general coordinates then degrees of freedom which leads to differential-algebraic equations of motion. [4] developed a computational approach to motor control that offers a unifying modelling framework for both dynamic systems and optimal control approaches. In discussions of several behavioural experiments and some theoretical and robotics studies, they demonstrated how the computational ideas allow both the representation of self-organizing processes and the optimization of movement based on reward criteria. [5] proposed a new mathematical formulation for the problem of optimal traffic assignment in dynamic networks with multiple origins and destinations. Several researchers have studied optimal control and dynamical systems. [6] studied Dynamical Systems based optimal control of incompressible fluids. They proposed a cost functional based on a local dynamical systems characterization of vortices. Connections of optimal control and Hamiltonian systems especially the necessary conditions of optimality has not been studied yet. In this paper, it is intended to focus on the link between optimal control and Hamiltonian systems. The case of Potryagin’s maximum principle will be considered in detail since it is capable of dealing with both unbounded continuous controls and bounded controls which are possibly discontinuous.

We consider the state of a control system described by an

whose evolution is governed by a system of differential equations

is a control function from a closed subset of

Given a compact interval

the optimal control problem can be stated as follows:

over all continuous functions

is called the running cost and

The Pontryagin’s principle requires the introduction of the Hamiltonian function

In analogy with the corresponding quantity in classical mechanics.

is the generalized momenta.

Similar to the formulation of the Hamiltonian systems, the following set of equations hold [8]

In this section we shall state the necessary conditions for optimality which then lead to Pontryagin’s maximum principle.

The necessary condition’s for

has a continuous partial derivative

Condition (ii) above can be written as

This is called Pontryagin’s maximum principle.

The interpretation of this principle is that on the optimal control,

is minimized with respect to the control variables

For simplicity we shall treat problem. This is a special case of the problem of optimal control in which the initial time and final time are fixed and there are no conditions on the final state.

We shall restate the Pontryagin’s principle so that it fits naturally to our framework of free terminal point problem.

A necessary condition for optimality of a control

for the free terminal point problem is that

is the solution of

be the set of control functions

is a feasible pair for the fixed initial state

The necessary and sufficient conditions that a control

is convex and the mapping

is a function on

To fit this to the performance index

It is assumed that that

is a real continuously differentiable function and convex in

is continuously differentiable convex function of

For simplicity we shall consider a linear system.

A necessary and sufficient condition for optimality of a control

is the solution of

is strictly convex in

Since the corresponding differential equations is a linear system, the set

of controls such that

. This is a convex set. Let

the corresponding solutions of the differential equations with

is the solution of the differential equation corresponding to

is a convex function on

. It can be shown that for each

has a minimum at

is strictly convex, the above inequality is strict. Thus

is a strictly convex function on

and the minimum is unique.

To fit the Pontryagin’s principle to theory of to the theory of Hamiltonian systems, a control system

will be considered with the input space

a manifold without boundaries

and a smooth function in all of its variables. Under these conditions, the Pontryagin’s principle implies the first order condition 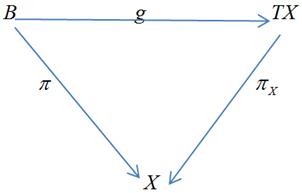 has a natural symplectic form

has a symplectic form

. The space of external variables

have a symplectic form

is a symplectic form

be a smooth function and

. These functions define the Hamiltonian

This is a generating function of the Lagrangian submanifold

given by the Hamiltonian equations

[8] has shown that Hamiltonian control system is given by

together with a smooth function

. It is assumed that

and the Hamiltonian system

be as defined above. Then if

has a local Hamiltonian function

[10]. We then obtain locally a Hamiltonian vectorfield

. The projection of the solution curves of

. It is noted that

. If we have only rank of the

. This is similar to the implicit Hamiltonian differential equation

then there may be some points in

where the projection does not have mximal rank and thus the solution of the differential equation will not be defined. If

, singularities and non-uniqueness of the optimal trajectories my occur [10].

In this paper, an optimal control for Hamiltonian control systems with external variables has been formulated and analysed. Necessary and sufficient conditions which led to Pantryagin’s principle are stated. It was shown how the Pontryagin’s principle to the theory of Hamiltonian systems. The case of Potryagin’s maximum principle was taken abroad because it is capable of dealing with both unbounded continuous controls and bounded controls which are possibly discontinuous.