Reduction of Mortality Rate Due to AIDS When Treatment Is Considered

In the last decades or so mathematical models in epidemiology are playing a very important role in analyzing the spread and control of the infectious disease that are causing a lot of human death every year. In the past, human being have been threatened by many infectious disease, most of them are caused by viruses [1]. Among them HIV is responsible for a lot of human death. Till now people are dying by this virus.

Human Immunodeficiency Virus (HIV) is a member of Lent Virus sub member family of retrovirus that produces chronic infections in the host and gradually damages the host`s immune system [2]. There are two types of HIV viruses: HIV-1 and HIV-2. Among them, HIV-1 is more dangerous. It easily transmits among the people and causes a lot of HIV infections globally every year [3]. Immediately after HIV infection, people cannot determine his/her infection. In this time, HIV infection may not show up on an HIV test, but people who have it are highly infectious and can spread the infection to others. People with chronic HIV infection may not have any HIV-related symptoms or only mild ones [4].

HIV is treated using a combination of medicines to fight HIV infection. This is called antiretroviral therapy (ART). ART isn’t a cure, but it can control the virus so that one can live a longer, healthier life and reduce the risk of transmitting HIV to others. ART is recommended for all people with HIV, regardless of how long they’ve had the virus or how healthy they are. If left untreated, HIV will attack the immune system and eventually progress to AIDS.

2. Formulation of the Model

The total sexually-active population at time t, denoted by

, exposed to HIV but show no clinical symptoms of the disease

, infected individuals who are taking treatment

Let us suppose that the susceptible population is increasing at a constant rate. Let the rate be

Susceptible individuals acquire HIV infection, following effective contact with people infected with HIV only (i.e. those in the E, I and T classes) at a rate λ, where

Here β is the transmission rate for HIV and

, individuals entering into this class from susceptible class

at a rate λ. In the HIV exposed class

And Individual also progresses to the AIDS class

In the treatment class, individuals progress to AIDS class

. Also individuals progress to the AIDS and HIV treatment class

. In this class, let

denotes the death rate due to the disease and

be the natural mortality rate.

Combining all the aforementioned assumption and definitions, the model becomes:

Schematically this can be shown as follows: 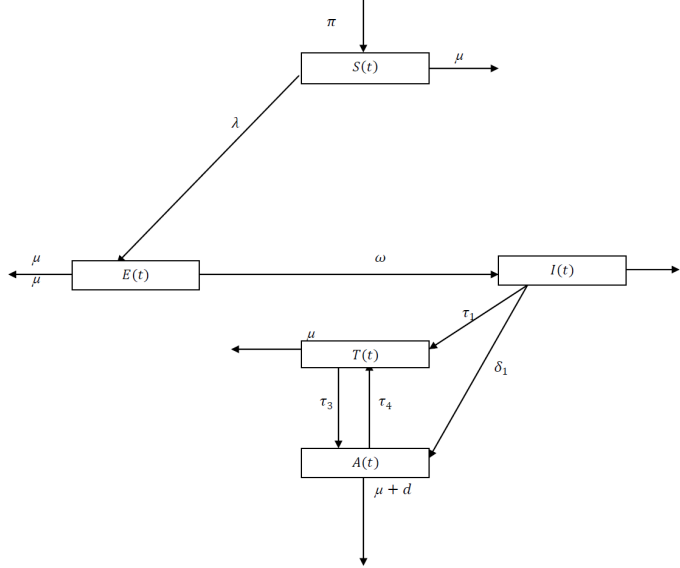 Figure 1. Diagram of the model.

3. Analysis of the Model

The total population is denoted by

Total population can be written as:

The equation written above, is changing at a rate

In absence of disease, i.e. for

By the separation of variables we can write

After integration we have

is the integrating constant which is to be determined. Let at

Putting the value of

contains the feasible solution of the model (1).

Now we need to check the positivity of the solution of the model (1). Let the initial data be

Now we have to show that the solution set

of the system (1) is positive.

Consider the 1st equation of the model (1)

After integration we can write

Similarly from the 2nd, 3rd, 4th and 5th equations respectively we have

. To obtain the disease-free equilibrium points on

(since in the disease-free equilibrium there is no disease). The positive DFE for this model is

5. Local Stability of the Disease-Free Equilibrium

The basic reproduction number which is denoted by

plays a vital role in the stability of the model. The number of new infections generated by an infected individual is known as the basic reproduction number. The associated nonnegative matrix

for the remaining transfer terms are given respectively by

has the following expression

is the spectral radius of the matrix

. The eigenvalues of the matrix

6. Global Stability of the Disease-Free Equilibrium

Here we have used a technique established by Castillo-Chavez [6] to investigate the global stability of the disease-free equilibrium point. We rewrite the model as:

Here the components of

denotes the infected population. The disease free equilibrium is now denoted as:

The condition must be met to guarantee a local asymptotic stability:

-matrix (the off-diagonal elements of

is the region where the model makes biological sense. If the system satisfies the conditions of then the theorem below holds:

and the assumptions in (4) are satisfied.

So the conditions are fulfilled. So

is globally asymptotically stable when

7. Endemic Equilibrium of the Model

We have used a well-known technique known as the Central Manifold Theorem [6] to check the stability of the endemic equilibrium point of the model. To apply this theorem we make the following change of variables.

The model (1) can be rewritten in the form:

The Jacobean of the system (8) is

To analyze the dynamics of (8), we compute the eigenvalues of the Jacobian of (8) at the disease free equilibrium (DFE). It can be shown that this Jacobian has a right eigenvector given by:

And the left eigenvectors are given by

which is less than zero and

are all positive and all the parameters are positive. So

Thus we have established the following theorem:

Table 1. Description of variables of the model.

Table 2. The values of the parameters of the model.

and figure 3 shows that the infected population is decreasing when

Here the value of the basic reproduction number

depends on the transfer rate

from the infected class

. The values of the reproduction number

decreases with the transfer rate

. Thus we can minimize the mortality rate by increasing the number of the treated population. Figure 4 shows that, the prevalence is decreasing when the basic reproduction number

and figure 5 shows that it is increasing when 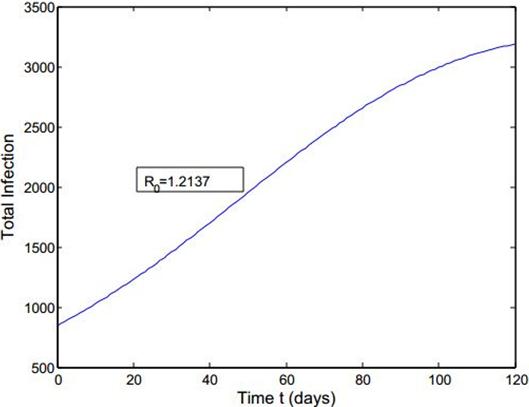 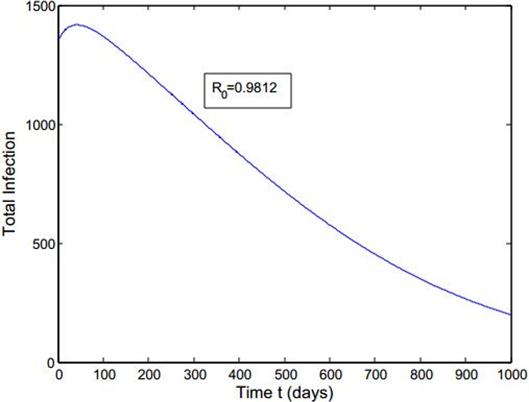 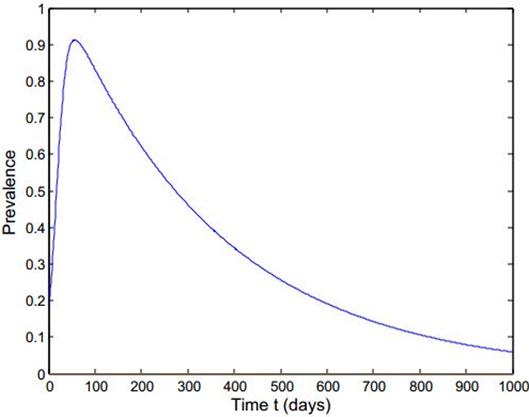 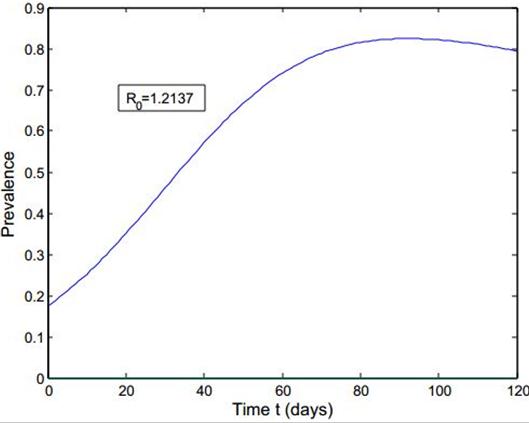 AIDS is one of the devastating diseases for human being. Mathematical models are used to estimate the dynamics of the diseases. Here we have formulated a model describing the HIV with treatment. The findings of the study are listed below:

• We can minimize the mortality rate by providing the treatment to the HIV infected people.

, which is the transfer rate from

class. Thus the reduction in the transfer rate from the infected rate

to the AIDS class

will reduce the mortality rate.

• The increasing of the transfer rate

from the infected class

to the treated class