Abstract: A new version of the KSOR method is considered to introduce the least squares solution of a full rank over determinant system of linear algebraic equations. The treatment depends on introducing an augmented non-singular square system through splitting the coefficient matrix A into two matrices A1, A2 with non-singular part, A1. Accordingly, a new version of the 3-block SOR method is introduced, the 3-block KSOR method. Selection of the relaxation parameter which guarantees the convergence in the sense of reducing the spectral radius of the iteration matrix is considered. Application of the theoretical results to a numerical example has confirmed the expected behaviour of the 3-block KSOR method.

Large linear systems of algebraic equations has appeared in many applications of science and engineering problems. The selection of the method of solution depends on the structure of the linear algebraic system under consideration. Iterative techniques especially the successive over-relaxation (SOR) method is highly recommended in the treatment of large sparse systems. The efficient use of the SOR methods depends on the selection of the relaxation parameters. The theory of SOR method for square nonsingular systems is well established, [1]. In 2012, Youssef introduced the KSOR method as a new version of the SOR method, [2] and in 2013 Youssef and Taha introduced the MKSOR versions of the MSOR method, [3]. We adapt the KSOR to treat full rank rectangular system.

is nonsingular matrix and has no zero diagonal elements. The following splitting of the coefficient matrix

is used in iterative treatments,

is the diagonal part,

is the strictly lower triangular part and

is the strictly upper triangular part of the matrix

The main idea in the KSOR is the assumption of using the current component in the evaluation process in addition to the use of most recent calculated components used in the SOR methods.

the sth approximation of solution of (2) then the KSOR, [2, 3] method is given by

is the Gauss –Seidel solution.

The matrix formulation of KSOR method is

is the iteration matrix

The main objective in this work is the treatment of the full rank rectangular system, [4,5,6].

There is many interesting trials to reformulate the iterative techniques to be suitable for such systems, [9, 10].

One can use the nonsingular part of the matrix

to write the system (10) in the following partitioned block form

are partitioned conformably with

This formulation can be treated with different attitudes. We focus on the three block formulation. The system in (14) is known as the augmented system, it can be rearranged in the form

Or, in full as

is square non-singular matrix. Accordingly the system (16) possesses a unique solution and suitable for the use of iterative techniques. Solving

of the original system as understood from the following theorem

The three block SOR method was introduced by Chen in 1975, [5]. Plemmons ‎[11], Niethammer, de Pillis and Varga ‎[6], later developed this method and specify SOR convergence properties. The 3-block KSOR iterative method can be introduced in the same approach illustrated in (5) and (6) as follows:

given in (17) and consider the splitting

is the iteration matrix of three block the KSOR method.

The theoretical characterization of the KSOR methods is strongly dependent on the corresponding Jacobi method. The three block Jacobi iteration matrix is given by

As in the three block SOR method the spectrum of

is very important in the convergence of the 3-block KSOR method.

Theorem 2: The eigenvalues of

lie in the real interval

is an eigenvalue of

is an eigenvalue of

as defined in (24) one can easily see that

is similar to a block diagonal matrix with blocks

So the eigenvalues of

lie in the real interval

It is clear from this theorem that

. Then the three block KSOR method converges for parameter

in some interval if and only if

then (19) converges for all

Then (19) converges for all

and it is diverging for other values of

, the optimum relaxation parameter is given by

the proof is similar to the proof which is introduced by Niethammer, de Pills and Varga ‎[6].

In order to illustrate the theoretical discussions, we introduce the following full rank over-determinant system

. The unique least squares solution of this system is the vector

Define the splitting of

and the splitting of

The augmented linear system of order 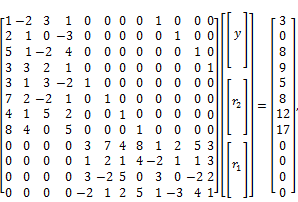 It is clear that the coefficient matrix is nonsingular, and the augmented system has a unique solution and

The 3-block SOR method converges for all

can be calculated to be,

Figure 1 illustrates the behavior of the spectral radius of the iteration matrix of the SOR method. 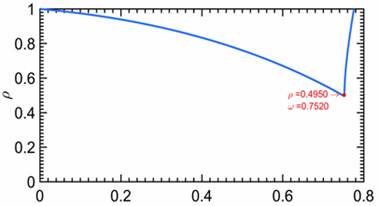 Figure 1. The behavior of the spectral radius of 3-block SOR.

The 3-block KSOR method is convergent for all

by theorem 3, we get

Equivalently, it can be approximated from Figure 2, which shows the behavior of the spectral radius of the iteration matrix of the 3 block KSOR method. 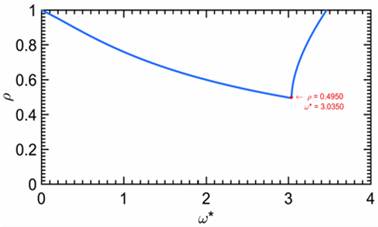 Figure 2. The behavior of the spectral radius of 3-block KSOR.

The table summarizes the results

The structure of the three block system possesses a very nice property (large number of zeros) which illustrates the efficient use of iterative techniques. It is clear from the system (16) that for the first n equations each equation has at most (n+1) non-zero (at least (m-1) zeros), also this is the same for the next (m-n) equations and the last n equations each equation has at most m non-zeros.

The optimum values of the relaxation parameter can be calculated, and the calculated values in a good agreement with the spectral behavior of the iteration matrix

The calculated numerical results in the given example has confirmed the theoretical results.

From figures 1 and 2, the calculated optimum relaxation parameters is in a good agreement with the behavior of the spectral radius of the iteration matrices.