The Problem of Countability of Highest Ordinals

Abstract: In this study we use the alternate point of view on the structure of ordinals, according to which each ordinal is the union of non-intersecting foregoing segments of ordinals of equal exponentiation. Each ordinal

is seen as the union

for any j=1, n-1 instead traditional union of foregoing intersecting segments of ordinals of consistently increasing exponentiation

. The first form corresponds to the geometric representation of ordinal

as an infinite n-dimensional matrix. According traditional formulation

-countable union of countable ordinals so

is countable. According to alternate formulation

for any n, thus

-union of ordinals and the findings will be different. These findings are: 1) the proof of countability of countable union of countable ordinals can not be directly or inductively transferred to its first limit

seems to be the first uncountable ordinal with its power is equal to continuum; 3) the subsequent ascending degrees of

, ... cardinals; 4) from here it also follows the direct justification of continuum hypothesis. Our study shows that in the domain of transfinite sets different points of view and its findings have the legal right to coexist as Nels Bohr's principle of complementarity in physics.

Contents
Abstract Keywords 1. Introduction 2. Two Methods of Renumbering of Elements of Ordinals 3. Two Opposite Conclusions Concerning  Countability 4. The Cardinality of

(1). Ordinals or ordinal type sets except usual attributes, such as cardinality and well-orderliness, also possess certain structure as they consist of consecutive segments. And there can be different points of view on structure of ordinals. For example according traditional interpretation ordinal

is defined as countable sum or union of intersecting countable ordinals, therefore

is countable so far as

, …} it is the number, which owing to equalities

, etc. can be written down [by analytical transformations] as:

» [end of quote]. However, there is absolutely overlooked that the summation of ordinals in its ascending order from left to right is identically equal to the last on the right greatest ordinal due to the non-commutativity of addition operation for ordinals. So the above expression for

is not the proof but only the tautology

countability is also based on analytical transformation with decomposition of ordinals on other basis, we quote [7]: «

is the decomposition of

basis. To spread out the same number on basis 2, it is enough to notice that

from where we get

. By the same way we get

The last view of

structure is significantly different from the previous one and the both of them contradict the standard description of ordinals in Cantor normal form [2]. Besides it is doubtful that such formal transformations are applicable to any ordinals because many other properties of operations with finite numbers aren't transferred to ordinals, e.g.: 1+

2 and so on. Note also that such formal, inductive "proofs" can be generated the next, for example: since

-limit are: 1) Q(n) is "n is the number represented by finite digits" but ØQ(

); 3) and so on. Below we also give the examples of not transferred properties for ordinals of higher power.

In such a situation the proof of any property P(c) has to be made by noninductive means. The same also concerns to the property "ordinal c is countable".

(3). Let us look at the structure of ordinals with an alternative point of view, where each ordinal is the union) of non-intersecting sets. Ordinal

and so on. And finally,

can not be at its maximum the union of

Thus, in a case of

we note the leap from all

-union. Hence the proof of countability of

2. Two Methods of Renumbering of Elements of Ordinals

designates the set of natural numbers which is countable by definition.

+3, ... and the proof of its countability is made by direct reordering of its elements therefore it is reduced to the countable sequence 1,

+3, .... The same method is applicable for subsequent ordinals

being a limit for the sequence

, ... the above mentioned method of direct reordering is inapplicable and the proof of its countability is made by Cantor pairing function [1], which is equivalent to counterdiagonal renumbering of two-dimensional and infinite in two directions matrix which includes the elements of its non-intersecting subsets {1, 2, 3, ... }, {

the corresponding set can be represented by a 3-dimensional and infinite in three directions matrix. And since this ordinal it may be possible to use two various methods to proof its countability.

Method 1 is based on counterdiagonal renumbering or Cantor tuple function [8]. For

we have the counterdiagonal planes in a 3-dimensional matrix. For any subsequent

Method 2 or the method of step-by-step reducing of dimensionality. As ordinal

then on the first step we perform counterdiagonal renumbering of

matrixes, therefore we obtain the single

matrix which on the second step is reduced by counterdiagonal renumbering to single natural set. To proof the countability of any

it demands to perform n-1 of similar steps to decrease dimensions of initial matrix.

The proof is made directly by method 1.

, so here the process of renumbering will be finished.

(2). From the other side, the Cantor pairing function [1] which uniquely encode two natural numbers k1, k2 into a single natural number π(k1, k2) is defined by

This definition is recursively generalized to the Cantor tuple function [8]

set is not possible.

Thereby the proposition-1 have been proved from both sides.

We can formulate objection and counter-objection against these reasoning.

, i.e. for any k-counterdiagonal-hyperplane in

is the union of

sets raised not more then to 3-th power. This goes against the nature of

set and against the Cantor normal form [2].

(2). Except counterdiagonal renumbering of elements of

set it is possible the alternate renumbering «on covers», e.g. for 2-dimentional infinite 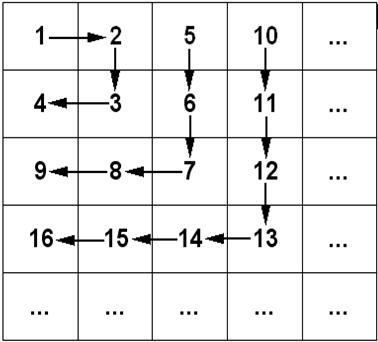 Summary. Thus we see that depending on renumbering order of

elements we get different conclusions concerning

. But absolute mathematical truth should not depend on renumbering order of

matrix elements. It once again shows that any formula or property derived for natural numbers, as well as formula (5), can not be directly or inductively transferred to its

limit, as it have been stated in the introduction. Therefore similar transfer in the above-stated objection is incorrect, as well as the objection itself. On the contrary, the proof (2) of the proposition-1 clearly shows that the rule of renumbering of previous

ordinals, which is going back to Cantor, can not be extended to their n=

, ..., ordinals enclosed each other up to

We can formulate four objections against these reasoning.

(1). This proof implicitly uses inductive procedure to transfer the property of all elements of ordered set

limit. That can lead to a wrong result as it noted in the introduction.

is countable it is previously necessary to renumber

having received as a result a single

matrix which then is reduced to one natural row, that is to execute

it is necessary in the same way to renumber

it is necessary to execute

of such renumbering of

it is necessary to execute not less than

matrixes, that is equal to

renumbering. Thereby to prove that

is countable it is necessary to execute such number of renumbering which countability we are going to prove. Therefore this proof, which implicitly uses the still an unproven subject of the proof, is unconvincing.

(3). Let's look at the problem from the other side.

set contains not less than

sets. Thereby if we reduce each

(4). The method 1 is based on Cantor tuple function which allows us unambiguously to calculate for each element of

its position in a resultant natural sequence. On the contrary the inverse Cantor tuple function allows us uniquely to decompose natural numbers set to

set. Method 2 for any ordinal

does exactly the same, i.e. it formulates another tuple function with the same properties. But proof 2 of proposition-1 states that for ordinal

the tuple function and its inversion does not exist.

On the adduced four arguments we did not find any counter-objections.

Summary. We considered two antithesis about countability of

ordinal and their proof. On ratios of possible objections and counter-objections the proposition-1 is more convincing. For a final choice from these two alternatives it is desirable to find such property of

ordinal, proceeding from the used paradigm of its matrix representation, which proof can't be disproved neither by method 1, nor by method 2.

On the other hand, all subsets of two numbers are representable in a two-dimensional infinite

matrix (Fig. 2) and the first line of this matrix contains subsets of one element. 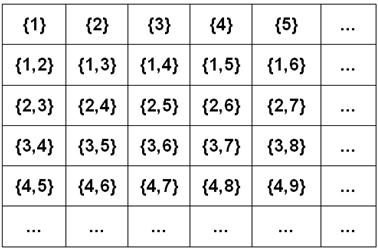 All subsets of three numbers are representable in 3-dimensional infinite

matrix at which the first plane contains subsets of one and two elements.

Thereby this theorem have been proved.

Consequence 1. Continuum hypothesis follows from this proof because in the ascending and continuous sequence of all countable transfinite ordinals

=с. Therefore its cardinality is the first one after

Consequence 2. The subsequent ordinals of ascending

represent powerset of ordinals of previous degree of

we should apply the theorem-1 proof to transfinite matrix of

number of dimensions instead

At the turn of XX century in the history of mathematics it has been occurred the significant but not noticed event. Prior to that mathematics revealed or took from some unknown storage the absolute truths such as multiplication table, squaring the circle, Fourier transform, etc. But in the last third of XIX century in mathematics there were began to appear theories and hypotheses [5]. But any theory represents only some set of initial intuitively or substantially reasonable provisions intended by means of certain rules and conclusions logically convincingly and consistently to explain some properties and phenomena of external or mental world. Thus for the similar explanation may be used several different theories and the adoption of one or another theory is not a consequence of its absolute truth, but a matter of public agreement. One or other social community might prefer one or another theory and follows it in accordance with the freedom of its choice. The same situation has occurred in respect of numerous set theories [9].

Moreover the degree of public recognition of any theory in natural sciences area is determined by predictive adequacy of concrete theory, since these predictions are usually available for further experimental testing. Mathematics is not a science with possibility of experimental verification of its theoretical provisions in area of set theories. Instead of experimental validation of mathematical findings the only criterion of its truth remains the consistency of its conclusions in the framework of the theory itself, but does not the presence of contradictions with the conclusions of other theories.

Further, any result in any theory can not be wrong iff it is not consistent with other results in other theory obtained from a different point of view and using a different proof. Results can be wrong iff the point of view is wrong or the proof includes errors. Indeed it is impossible to disprove the theorems in Euclidean geometry on the base of results in spherical geometry. In such a situation, at the degree of public acceptance of one or another set theory and its results there begin to influence professional consents, political considerations and teleological grounds, which is not always compatible with the dispassionate scientific approach to the evidences [6].

Numerous subtleties of such public consents in most accepted version of set theory force some professors and lecturers clearly to warn their audience about these subtleties in their textbooks [10], we quote: "In fact, we have already reached a dangerous border where visual representation of sets lead to a contradiction", and also: "Here again we come to the dangerous border of paradoxes and so we have to be expressed evasively".

As we above have seen the question of countability or uncountability of some ordinals also depends on a particular viewpoint on the structure of such ordinals. So in most popular set theory according to the axiom of exponentiation of ordinals it is considered that ordinal

[4] that ascends to Cantor natural form [2]. According to that

is also countable. But it is possible the alternate point of view:

-union of foregoing non-intersecting segments of ordinals of equal exponentiation, that leads to the conclusion that