, then the above equation (1) is said to be hyperbolic partial differential equation. If the discriminate

, then the equation is said to be elliptic partial differential equation and if the discriminate

,then the equation is also said to be parabolic partial differential equation.

PDEs are mathematical models of continuous physical phenomenon in which a dependent variable, say u, is a function of more than one independent variable, say y (time), and x (eg. spatial position). PDEs derived by applying a physical principle such as conservation of mass, momentum or energy. These equations, governing the kinematic and mechanical behavior of general bodies are referred to as Conservation Laws. These laws can be written in either the strong of differential form or an integral form.

called control volumes (CVs), and related nodes where the unknown variables are to be computed. The union of all CVs should cover the whole problem domain. In general, the CVs also may overlap, but since these results in unnecessary complications we consider here the non-overlapping case only. Since finally each CV gives one equation for computing the nodal values, their final number (i.e., after the incorporation of boundary conditions) should be equal to the number of CVs. Usually, the CVs and the nodes are defined on the basis of a numerical grid. For one-dimensional problems the CVs are subintervals of the problem interval and the nodes can be the midpoints or the edges of the sub-intervals.

Figure 1. Definitions of CVs and edge (top) and cell-oriented (bottom) arrangement of nodes for One-dimensional grids.

Figure 2. The indication for the place of nodes.

Definition: Finite Volume Method is a sub-domain method with piecewise definition of the field variable in the neighborhood of chosen control volumes. The total solution domain is divided in to many small control volumes which are usually rectangular in shape. The numerical solution that we are seeking is represented by a discrete set of function values {

} that approximate u at these points, i.e

. In what follows, and unless otherwise stated, we will assume that the points are equally spaced along the domain with a constant distance

. This way we will write

such that the collection of all those sub domains forms a partition of Ω, that is:

is an open, simply connected, and polygonal bounded set without slits

2.  There is no any common point between each sub domains. (i.e.

3.  The union of all the sub-domain gives the domain of the region. (i.e.

Example 1: Consider the homogeneous Dirichlet problem for the Poisson equation on the unit square

of a square grid with mesh width 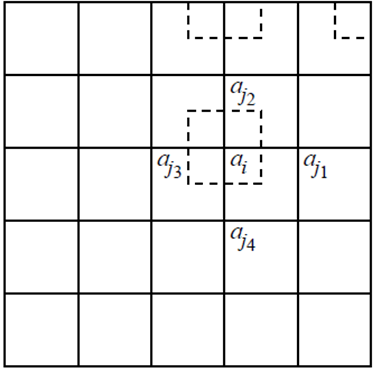 For an inner control volume

. Approximating the integrals on

by means of the midpoint rule and replacing the derivatives by difference quotients, we have

and we can approximate the right hand side by using the mid-point rule. If

, then parts of the boundary

lie on ∂Ω. At these nodes, the Dirichlet boundary conditions already prescribe values of the unknown function, and so there is no need to include the boundary control volumes into the balance equations.

In order to approximate the value of the solution of partial differential equation by finite volume method we use the following steps.

Step 2: Discretization: The most important features of finite volume method are the integration of the governing equation over a control volume to yield a discretized equation at its nodal points

Figure 4. Discretization of the domain.

Step 3: Solution: After discretization over each volume method, we are finding a system of algebraic equation which is easily solved by numerical methods.

3. Formulation of Finite Volume Scheme of One Dimensional Elliptic PDEs

The principle of the finite volume method will be shown here on the academic Dirichlet problem, namely a second order differential operator without time dependent terms and with homogeneous Dirichilet boundary conditions. Let f be a given function from (0, 1) to IR, consider the following differential equation: consider the equation of the form

) with the boundary condition

there exists a unique solution

to the Problem (3.1). In the sequel, this exact solution will be denoted by

. In order to compute a numerical approximation to the solution of this equation, let us define a mesh or grid, denoted by T, of the interval (0, 1) consisting of N cells or control volumes, denoted by

Definition: An admissible mesh of (0, 1), denoted by T, is given by a family

and the step size has the following properties

. The discrete unknowns are denoted

can be viewed as an approximation of the mean value of

or of the value of

or of other values of u in the control volume

. The first equation of (3) is integrated over each cell yield the following.

After integration we get the following expression.

for i = 1, 2…,N in an actual computation, an approximation of

by numerical integration of mid-point rule can be used.

The finite volume scheme for the problem (3) can be written as follows,

The numerical scheme (5)-(8) may be written under the following matrix form:

Solution Now to solve the above problem, integrating equation (3) over each control volume

be the unique solution of Problem (3).

be an admissible mesh in the case of the above definition. Then, there exists a unique vector U = (

Now to estimate the error using the equation (13) implies c=0.1

4.1. Formulation of Finite Volume Method for Linear Systems of PDEs

This section is concerned with the discretization of linear system of two dimensions of elliptic partial differential equation by finite volume method (FVM) on Ω = (0, a) × (0,a) with rectangular meshed and let Ω be an open bounded polygonal subset of IR2 and admissible finite volume mesh of Ω, denoted, by T is given by a family of control volumes which are open polygonal convex subset of Ω.

Consider the partial differential equation of the form

) is included in the boundary of the domain

be an admissible mesh of

that satisfying the following additional assumption.

) be the domain and f

.Then there exists unique solution

such that the formula

with h = k = 0.2, after integrating over the control volumes

one can get the following.

And by using finite difference a method, we have

The following results are obtained from solution of the finite volume scheme related to problems (15) and (16).

Table 3. Comparison between the numerical and exact solutions of the example 3 by using FVM with k0 = 1.

and the following solution is obtained for

Table 4. Comparison between the numerical and exact solutions of the example 3 by using FVM with k0 = 2.

Also the following solution is obtained

Table 5. Comparison between the numerical and exact solutions of the example 3 by using FVM with k0 = 3.

Now using the data that are given in the three tables, we can draw the figure on the same coordinate axes as follow 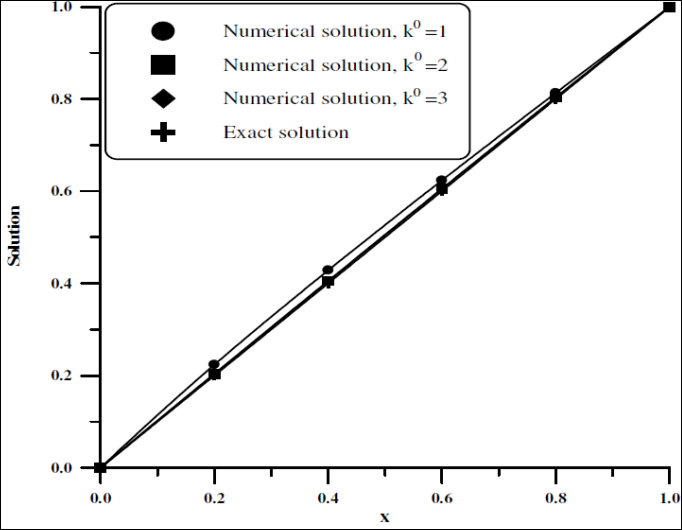 Figure 5. The numerical and exact solutions of example (3) by using FVM.

Since the finite volume method (FVM) for nonlinear two-dimensional elliptic problem of PDE is difficult to be used directly; thus the Newton’s method used to overcome such computational difficulties. This method is used to find the nonlinear partial differential equation. In these case the functional iteration is written as:

Now, integrating equations (18) and (19) over each control volume.

The results of the above integral are given by:

After some computations, we have the following expression.

Moreover we have the following values of

Also the values of

are evaluated as follows.

The following results are obtained.

Table 7. Comparison between the numerical and exact solutions of example (4) by using FVM when k0= 1.

Table 9. Comparison between the numerical and exact solutions of example 4 by using FVM when k0=2.

Using the above set of data we can draw the figure of exact versus numerical solution. 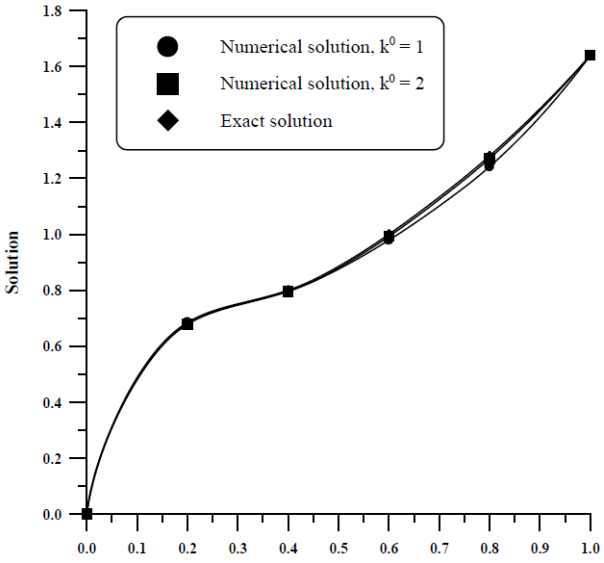 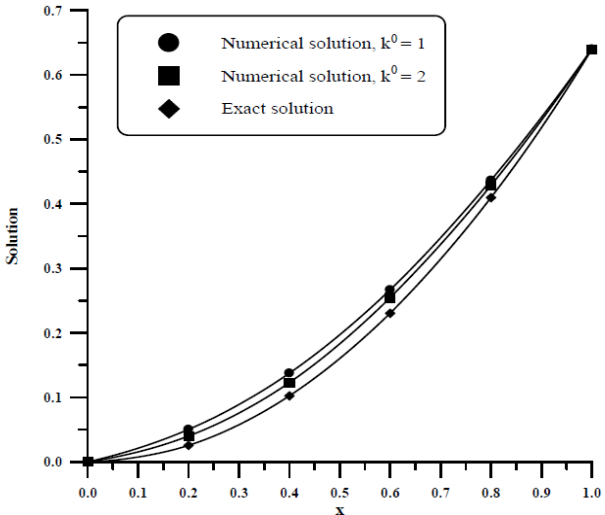 (Ω). Let u be the unique variation solution to equation (17). Under the assumptions of equation (18). Let

. Then, there exists a unique solution

Moreover, there exists C > 0 only depending on u, Ω and

such that we have,

The application of the above theorem to estimate the error of two-dimensional elliptic problem followed in example 2.

and hence we have also,

In order to obtain a finite volume descritization, the domain

. consider the second order one dimensional linear elliptic problems of the form as follow

. Here the exact solution of the problem is

, but the numerical solution over the control volume

is natural number. Integration of the governing equation over a control volume to yield descritized equation at its nodal points.