An Application of the New Integral "Aboodh Transform" in Cryptography

Abstract: Cryptography is the science of providing security for information, It has been used historically as a means of providing secure communication between individuals. Message encryption has become very essential to avoid the threat against possible attacks by hackers during transmission process of the message. In this paper authors have proposed a method of cryptography, in which authors have used Aboodh transform for encrypting the plain text and corresponding inverse Aboodh transform for decryption.

Cryptography [5-10] referred almost exclusively to encryption, which is the process of converting ordinary information (called plaintext) into unintelligible text (called cipher text). Decryption is the reverse, in other words, moving from the unintelligible cipher text back to plaintext. A cipher (or cipher) is a pair of algorithms that create the encryption and the reversing decryption. The detailed operation of a cipher is controlled both by the algorithm and in each instance by a "key". The key is a secret (ideally known only to the communicants), usually a short string of characters, which is needed to decrypt the cipher text. (Fig. 1) [11-15].

Definition: Consider functions in the set

For a given function in the set

must be finite number,

may be finite or infinite. Aboodh transform denotedby the operator

is defined by the integral equation

Linearity:-Aboodh transform is a linear transformation which means that the transform of a sum of waveforms is the sum of their transforms. Stated formally the linearity property is

The above result can easily be generalized to more than two functions.

The following algorithm provides an insight into the proposed cryptographic scheme. The sender converts the original message or plain text into cipher text using the following steps.

I)       Treat every letter in the plain text message as a number, so that

is the number of term in the sequence; consider a polynomial of degree

I) Consider the cipher text and key received from sender. In the above example cipher text is "TEBRJBLB" and key is

VI)    Consider the coefficient of a polynomial

as a finite sequence.

VII) Now translating the number of above finite sequence to alphabets. We get the original plain text as "TEACHERS".

5. Implementation of the Efficient Algorithm 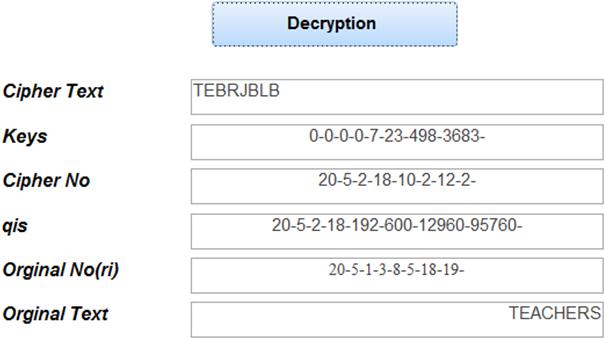 Computers are good at doing mathematics. When we create a system to translate some piece of information into numbers (such as we do with text and ordinals or with space and coordinate systems), computer programs can process these numbers quickly and efficiently. Cryptography is one of the first lines of defense against hackers and crackers in today's world. Thus, it will stay important for a long time to come. In the proposed work a new cryptographic scheme is introduced using Aboodh Transform and the private key is the number of multiples of mod n. Visual Basic is more convenient to use in the Cryptography and is less prone to errors.