1Department of Science, The State University of Zanzibar, Zanzibar, Tanzania

Different interpretations exist on what marriage is. According to [1], marriage is defined as "the stage at which a man and a woman are socially or legally permitted to live together". According to [2], "Marriage is the only institution that allows two people to establish a very strong and enduring relationship that is fully backed by the law and society as a whole." According to these definitions a marriage cannot be accepted without being supported by law and society i.e. there are rules, norms and values which guide this institution. Marriage shall be entered into only with the free and full consent of the intending spouses, that is, a marriage can be established after the consent of the related couples only [3]. However in many cultures the consent of the couple only is not enough. The male parent of the bride must also give his consent.

Our societies have been characterized by low age at first marriage. According to [4], early marriage is the marriage of children and adolescent below the age of 18. The practice of early marriage is most common in Sub-Saharan Africa and Southern Asia. A study conducted by [5] established that generally Tanzanian women enter the marriage institution at the very low age. The study emphasized that the minimum age is as low as six years.

Many studies have shown that low age at first marriage result into number of problems. "Early marriage contribute to series of negative consequences both for young girls and society in which they live." argues by [6]. Low ages at first marriage may also be associated with reduced education among girls, although it is difficult to ascertain the causality, this was narrated by [7]. A young bride may be less able to assert power and authority in her marriage especially given that women get married to men who are on average several years older.

Marriage without consent is widely thought to be major cause for most of the divorces, and many of early marriages are held without the consent of the girls, and this is the cause of instabilities of most marriages [4]. Instability is very common in early marriages, since the women enter the union by force and lack faithfulness and love to maintain the marriage so they run away back to their parents or to towns to search for a better living, getting employed as housemaids or becoming prostitutes.

[4] argued that due to physiological immaturity of sexual organs, some of the young married women faced health related problems like physical pain during intercourse, obstetric fistula due to early delivery, and other complications due to pregnancy. [4] also believes that due to age difference, early married women have and/or exercise lower sexual and reproductive rights than those who get married at appropriate ages and due to lack of education they have less ability to make decisions on matters related to reproductive health, such as the use of contraceptives and rights over sexuality. According to [8], early marriage certainly denies children of school age their right to the education they need for their personal development, preparation for adulthood, and effective contribution to the future wellbeing of their family and society.

There have been many contributions to reduce the problem of low age at first marriage such as education. Studies have indicated that as the level of education increases, the year at the first marriage is also affected. There is positive correlation between the number of years of education one gets and the average age at first marriage. According to [9], women with at least some secondary school education are less likely to get married at younger ages than women with less education. The study related to early marriage and female schooling attainment in Bangladesh was done by [10]. Their results indicate that each additional year that marriage is delayed is associated with 0.22 additional year of schooling and 5.6 percent of higher literacy. It is found by [1] that, as educational levels increase, ages at marriage also increases. In this paper it is intended to develop and analyze a model on the impact of education on the average age at the first marriage in Tanzania. A model for fitting the age pattern of first marriage called PICRATE model is developed by [11]. PICRATE meaning "Phased-In-Constant Rate". In this paper, it is intended to modify the work by [11] by incorporating the impact of education at first marriage for women.

A model for the impact of education on average age at the first marriage for women is formulated and analyzed. According to [11], the PICRATE model is given by the formula:

is age (continuous, measured in years),

is the age at which marriage begin,

is the proportion of ever married at age

is the proportion that will eventually marry (maximum value of

is the cumulative normal distribution function with mean 0 and standard deviation 1.

describes the history of first marriages in the cohort, but for a stable population it also describes the age-specific ever-married proportion for a population. Note that the curve is determined by the three parameters

In developing the model of the impact of education on average age at the first marriage, all parameters in PICRATE model are retained except

which is treated as a function of social economic variable (linear function of education).

In formulating the model, the following assumptions are taken into consideration:

• The model is correct. Nonlinear regression adjusts the variables in the equation model chosen to minimize the sum-of-squares. It does not attempt to find a better equation.

• The variability of values around the curve follows approximately a Gaussian distribution.

• Lastly, the errors are independent. The deviation of each value from the curve should be random, and should not be correlated with the deviation of the previous or next value. The assumption is violated if there is any carryover from one sample to the next [12].

The results of nonlinear regression are meaningful only if these assumptions are true (or nearly true).

Assuming that the social-economic factors affect the age at the first marriage linearly, then

, the age at which marriage begin is assumed for simplicity to be a linear function of education which can be expressed as:

as defined earlier, is the age at which marriage begin,

are parameters to be estimated,

are dummy variables, where

represents education at primary level, while

Then the modified model will be:

3. Estimation of the Model Parameters

We consider the nonlinear equation

A linear approximation to the nonlinear function (5) is given by the first two terms in the Taylor series expansion (6) i.e. 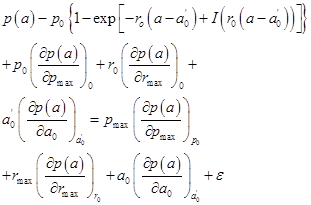 is the initial guess value of

is the initial guess value of

as defined earlier, is the age at which marriage begin.

The partial derivatives in (8) are given by

We substitute the expressions for,

in equation (8), to get parameter estimates for,

. The estimated coefficients values for,

which are denoted by

are used as a new set of initial estimates, and the nonlinear equation is linearized around these values. The result is a new linear regression equation. From equation (8) we then have 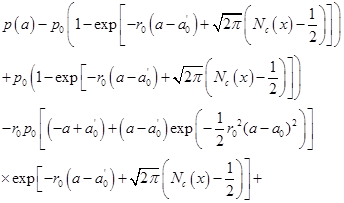 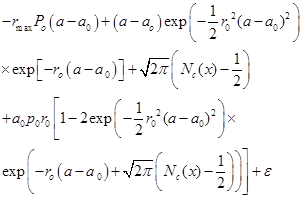 After simplifying this equation, we let

be a set of initial estimates. Substitute these values in equation (9), and then apply ordinary least square to this equation to get a new set of coefficient estimates

will be attained. SPSS Software is used to estimate these parameters.

by using the same procedure of least square method as it was used to estimate parameters of PICRATE model. On estimating the modified model parameters, STATA Software is used.

Two datasets of the Tanzania Demographic and Health surveys of 1999 and 2003-04 are used.

4. Analysis of the Model

4.1. Descriptive Analysis of Education Level and Age at First Marriage

The results for the education covariates are shown below.

Table 1. Distribution of age at the first marriage by education level.

Table 1 summarizes the findings from the descriptive analysis of the data. For both survey years, the age at the first marriage was lower for respondents with no education compared to those with education. In both years, the mean age at first marriage increases gradually as the level of education increases as seen in Figure 1 and Figure 2 below. 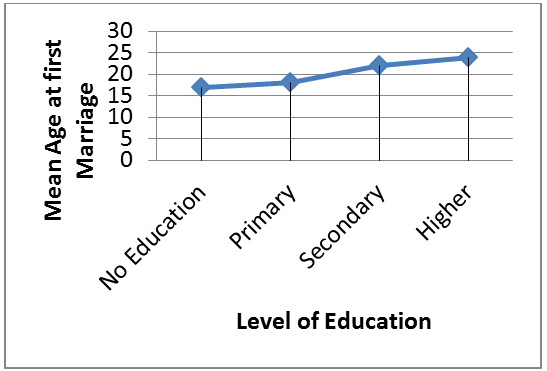 Figure 1. Variation in the mean age at the first marriage by Levels of education in Tanzania for the data of 1999. 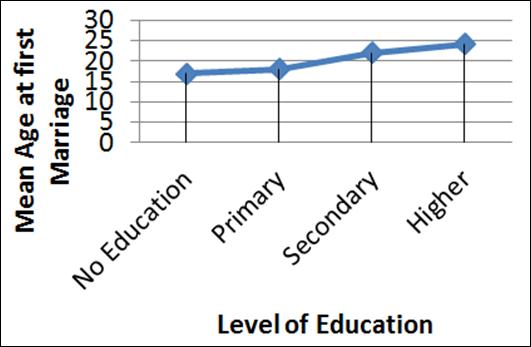 Figure 2. Variation in the Mean Age at First Marriage by Levels of Education in Tanzania for the data of 2003/04.

Table 3. Distribution of age at first marriage by education attainment.

From these observations, age at first marriage can be regarded as increasing function of education level or education attainment.

This section presents results of the empirical models of age at first marriage. The model is a modified PICRATE to the case of Tanzania. Fitting the model was done by non linear least square technique using the STATA Software.

Table 4 and table 5 below show results of modified PICRATE model in Tanzania from TDHS data in 1999. Displayed in the table are model summary and parameter estimates (coefficients) with their significance/ p-values.

The F-value is 885384.75 and its probability (p-value) is 0.000 implying that the model is significant at 1% level since p-value < 0.05. The coefficient of determination, R-squared, is 0.9991 implying that the variation (99.91%) in the ever married proportion model is explained by the covariates, namely education levels, in the form of a prescribed model (PICRATE model). This linear function of education is represented by three parameters which are

Out of the five parameters estimated in the model, four of them are statistically significant. These are

is to be statistically insignificant (

Table 6 and Table 7 below show the results of the modified PICRATE model in the year 2003/04.

The F-value is 850853.05 and its probability (p-value) is 0.000 implying that the model is significant at 5% level since p-value < 0.05. The coefficient of determination, R-squared, is 0.9984 implying that the variation (99.8%) in the ever married proportion model is explained by the by covariates, namely education levels, in the form of a prescribed model (PICRATE model). Again this linear function of education is represented by three parameters which are

All five parameters in the model are statistically significant with

for each. The values of these parameter estimates for 2003/04 data are

Figure 3 and Figure 4 show the comparisons of the empirical data with the data computed by the modified PICRATE model for the years 1999 and 2003/04 respectively. 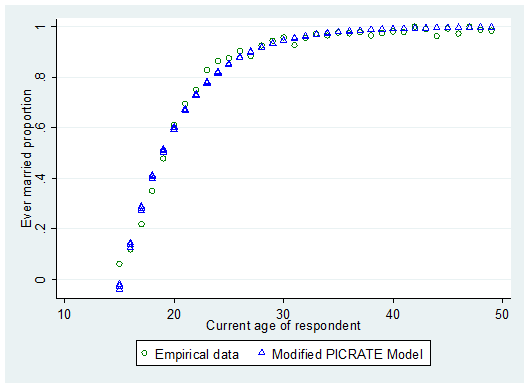 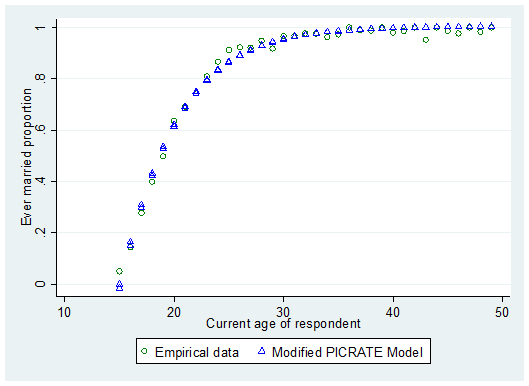 From the Figure 3 and Figure 4, the modified PICRATE model agrees very closely to the empirical data. These results show that education level and education attainment has an impact on the average age at the first marriage in Tanzania. Also these findings do not imply on the quality of education in Tanzania, they show that as girls attains further studies, her age at first marriage is delayed. Delayed marriages may have result in reduction in fertility rate and contribute in the reduction in population growth rate.

In this paper, a model of the impact of education on the average age at the first marriage was developed and analyzed. At the first stage PICRATE function

(probability distribution function) were considered. As an extension of the standard PICRATE model, it was assumed that the social economic variable (education) affect the age at the first marriage linearly. Consequently, the age at which marriage begin in the PICRATE model was assumed for simplicity to be a linear function of education. By doing that we obtained a modified PICRATE model.

which is one of the parameter of linear function of education which estimates the effect of primary education on the mean of the first year of marriage. This parameter was found to be significant in 2003/04 and insignificant in 1999 based on the reported

-values and selected level of significance.

It is seen that high education level has a very high impact on the delay of early marriage. It is appropriate for the government to formulate policies which will encourage girls to get further studies. This will protect them from early marriages. The education policy needs to be reviewed. For example the level of minimum education should be increased from standard seven to form four. This will increase the number of years in which the girls are in school and hence delay early marriages.