Department of functional analysis, Institute of Mathematics and Mechanics of NAS of Azerbaijan, Baku

Spectral theory of operators is one of the important directions of functional analysis. The method of separation of variables in many cases turned out to be the only acceptable, since it reduces finding a solution of a complex equation with many variables to finding a solution of a system of ordinary differential equations, which are much easier to study. For example, a multivariable problems cause problems in quantum mechanics, diffraction theory, the theory of elastic shells, nuclear reactor calculations, stochastic diffusion processes, Brownian motion, boundary value problems for equations of elliptic-parabolic type, the Cauchy problem for ultraparabolic equations and etc.

In the further Browne, Sleeman, Roch and other mathematicians  built the spectral theory of selfadjoint multiparameter system in infinite-dimensional Hilbert spaces[2],[3]

At the proof of these results we essentially use the notion of the analog of an resultant of two polynomial bundles [6],[7].

is the tensor product of the spaces

be the nonlinear multiparameter system in two parameters. Operators

) act in the the Euclidean space

is a tensor product of spaces

For nonlinear algebraic system with two variables sufficient conditions of existence of solutions are given. The proof of these statements are received as a corollary of more common reviewing considered in this paper.

is called an eigen vector of multiparameter system (2)

) is induced into the space

), acting in the space

), if the following conditions satisfy : on decomposable tensor

on other elements of the space

-on linearity and continuity

th associated vector to an eigenvector

if the following conditions (3) satisfy.

are arrangements from set of the  whole nonnegative numbers on 2 with possible recurring and zero.

of space can be spread out in series

with coefficients, not depending on indices  of  the vectors

coincides with the system of eigen and associated vectors of an operator, and systems

are constructed, proceeding from sequences on

to some rules speak about

Let be two operator pencils depending on the same parameter and acting in, generally speaking, in various Hilbert spaces

is presented by the matrix

which acts in the

In a matrix (4). number of rows with operators

is equal to leading degree of the parameter

is equal to the leading degree of parameter

) are bounded in corresponding Hilbert spaces, one of operators

has bounded inverse Then operator pencils

have a common point of spectra if and only if

Remark1. If the Hilbert spaces

, correspondingly . For study of the spectral properties of the (2) we use the notion of abstract analog of resultant of

Then we have two operator pencils in one parameter

Arrange the pencils on increasing of the degree of the parameter

and denote the operator coefficients of the parameter

and in the pencil

operator coefficient of the parameter

These operators, induced into the space

Construct the resultant of operator pencils 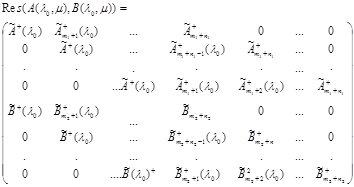 The number of rows with the operators

is equal to the leading degree of the parameter

; number of rows with the operators

is equal to the leading degree of the parameter

. Let the highest degree of

in the operator coefficient at

By analogy the highest degree of

in the operator coefficients at

is fixed arbitrarily, further in the system we miss the index 0 of the parameter

and one of  the following conditions:

has inverse and selfadjoint

has inverse and selfadjoint are fulfilled. Then the eigen and associated vectors of the system (2) form

multiple basis in the tensor product of the spaces

Proof of the Theorem 2

the common point of spectra is the common eigenvalues of operators). It is not difficult to see, that under the conditions of the theorem 2 the

. In fact, decomposition of the (6) is the operator pencil in the parameter

in the obtained in the result of the decomposition of the resultant is selfadjoint operator. Consequently, eigen and associated vectors of the obtained pencil form the corresponding to leading degree of the parameter fold basis in the tensor product space

. Earlier in the [5],[6] is proved that the system of eigen and associated vectors of obtained pencil, depending on parameter

,coincides with the system of eigen and associated vectors of the system (2).

Remark1.Besides of these eigen and associated vectors are the first components of the elements of resultant of operator pencils

is the first component of the eigenvalue of the system (2).

is fixed. Thus, the systems of eigen and associated and vectors of (2) and the resulting expansion of the resultant simultaneously fold complete or fold up basis in the space

at the same time.

The following result for the algebraic system of equations

Proving in the work [8]is the corollary of the theorem2.

Really. instead of the spaces

we adopt the space

play the role of variables

and one of the following conditions

are satisfied then the algebraic system (7) has not less than