1Department of functional analysis, Institute of Mathematics and Mechanics of NAS of Azerbaijan, Baku

2Department of functional analysis of mathematics and Mechanics of NAS of Azerbaijan, Baku

Abstract: For the multiparameter system of operators in three parameters the conditions of the existence of multiple basis of eigen and associated vectors in finite dimensional space is proved. The proof of this fact uses essentially the notion of the Resultant of two operator pencils, acting in, generally speaking, in different Hilbert spaces and the criterion of existence of common eigenvalues of several operator pencils, acting in Hilbert spaces.

But, unfortunately, the technique of research in these works demands all operators in the system to be selfadjoint. For non- selfadjoint multiparameter systems the investigated technique does not allow to solve the simplest problems of the spectral theory.

The paper is devoted to the study of nonlinear multiparameter system of operators in finite dimensional Hilbert spaces. Previously, for nonlinear algebraic of system of equations was built analog of determinant of Cramer and it is given a necessary and sufficient condition for the existence of solutions of nonlinear algebraic systems with a complex dependence on the variables [4]. For two-parameter systems in the abstract case, it is obtained the results to determine the conditions for finding the number of solutions [6].

In this paper describes the method of determining the conditions on the coefficients of the multiparameter system to establish the existence of its eigenvalues.

Consider a multiparameter system of operators in three parameter of the form.

) is identical operators in

), is called the operator, induced in

that equations (1) and also the equations

are satisfied, then the decomposable tensor

is called the eigenvector of the multiparameter system (1).

-associated vector to an eigenvector

if there is the set of elements

such that the following conditions (2) are satisfied

is arrangement from set of the whole nonnegative numbers on 3 with possible recurring and zero.

Remark 1. We gave here the definition of the associated vector for the case when the number of parameters in the system is equal to 3 (in [10] the definition is given for the common case)

be two operator pencils depending on the same parameter

is the operator, presented by the determinant (4) and acting in the space

the number of rows with operators

is equal to leading degree of parameter

; the number of rows in matrix

coincides with the leading degree of parameter

. One major application of the matrix theory is calculation of determinants. It turns out that a mapping is invertible if and only if the determinant of this matrix is not zero.

Resultant of these polynomials is the operator acting in the space

(probably, in some expansion of a field). 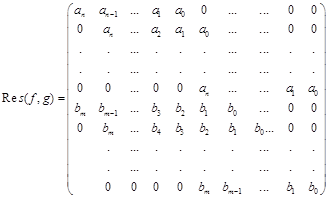 the number of rows with coefficients

to equally leading degree of unknown

, the number of rows of a matrices with numbers

coincides with the leading degree of unknown

. Continuant of this Resultant is a polynomial from coefficients and equal to zero then and only then when polynomials also have a common roots (probably, in some expansion of a field).

The study of multiparameter system (1) of equations is spent with help of following result from [5]:

bundles depending on the same parameter

(the direct sum of

) are introduced the operators

with the help of operational matrices (4).

be the operational bundles acting in a finite dimensional Hilbert space 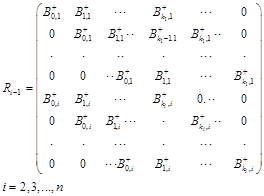 The number of rows with operators

and the number of rows with operators

the set of eigenvalues of an operator

if and only if

In particular, in [6] the two-parameter system operators

is the product of dimensions of spaces

then inner product of these elements in space

is defined by means of the formulae

on linearity and continuity.

are self-adjoint operators everyone in their space

are the self-adjoint operators, acting everyone in finite-dimensional space, correspondingly.

-fold basis of system of eigen and associated vectors of (5) takes place.

At the study of the system (1) we will be used essentially the results of [5,6]:

In (1) we fix parameters

. Then the system (1) contains three operator bundles depending on one parameter

. Using the result of the theorem 2, we build operators

.They are the Resultants of operator bundles

In the matrices of the operator

the number of rows with

is determined with the help of matrices

In the matrix of the operator

the number of rows with

act in the same space

- direct sum of the

are equal to zero if and only if matrices of operators

So at the decompositions of continuants of Resultants

we obtain very bulky forms, in obtained equations we will operate with the leading degrees of parameters in

. Further we will work only with the members having the leading degrees. We can write the decompositions of continuants of Resultants

in the forms, correspondingly:

. Expression (10) is the decomposition of the continuant of the Resultant of operator bundles

) is the eigen value of the (9), then from the definition of Resultant follows that at these meanings of parameters

we have that operator pencils

have a common point of spectra

. By analogy if the couple (

) is the eigen value of the (10), then from the definition of Resultant follows that at these meanings of parameters

we have that operator pencils

have a common point

of spectra of these operator bundles.

Now we consider the system of equations

is the eigenvalue of the system (11) and

is the corresponding eigen vector of (11) then

So the [8], [9] are decompositions of Resultants

, correspondingly, and (11) is satisfied then the element

is the first component of the element of

Operator pencils (9) and (10) form the nonlinear two parameter system of the kind of the system (5).

are self-adjoint operator in the space

, are the self-adjoint operator, acting in finite-dimensional space

is selfadjoint operator in the space

, Then the eigen and associated vectors of the three parameter system of operators in finite dimensional space form the

. Then we have two operator bundles depending on the parameter

Construct the resultant of (9) and (10), when parameter

is fixed. It is clear that the decomposition of this resultant is the operator bundle. In fact, the leading degree of the parameter

depends on values of numbers

with the greatest degree

In this paper the conditions of existence of multiple basis on eigen and associated vectors of three parameter operator system in finite dimensional spaces are proved.