Later, many of his followers have studied spectral problems of self-adjoint multiparameter systems.

in the Hilbert spaces

is the tensor product of spaces

is considered in the work [9].

act in the Hilbert space

be two decomposable tensors .The inner product of these elements in the space

is defined by means of the formulae

on linearity and continuity

such that (1) is fulfilled. A decomposable tensor

is named an eigenvector of the system (1), corresponding to the eigenvalue

is induced by an operator

, acting in the space

, into the tensor space

, if on each decomposable tensor

and on all the other elements of the space

is defined on linearity and continuity.

is an identical operator in

depending on the same parameter

is given with help of matrix 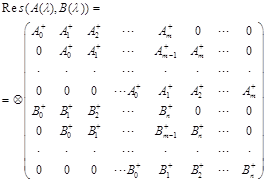 In [4,11] this operator is called an abstract analog of an Resultant for polynomial bundles (2).

times, and lines with оperators

are the greatest degrees of parameter

accordingly. Thus, the Resultant is an operator, acting in space

that is a direct sum

of copies of tensor product spaces

is equal to its formal expansion when each term of this expansion is tensor product of operators. Let operator

is invertible. If the greatest degrees of parameter

coincide (see [11]) or if the greatest degrees of parameter

the following result is proved in the work [9]:

are selfadjoint operators everyone in their space

are selfadjoint everyone in their spaces

are the self-adjoint operators, acting everyone in its finite-dimensional space.

For proving we use the notion of criterion of existence of common point of spectra of several bundles with the same one parameter.

3. Necessary and Sufficient Conditions of Existence of Eigen Values of Several Operator Polynomials

is an operator bundle with a discrete spectrum, acting in Hilbert space

Without loss of generality, we assume that.

is the direct sum of

copies of the tensor spaces

with help of the operator matrices (5) 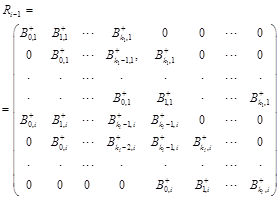 Rows with the operators

times and rows with the operators

are induced by an operator

, acting in the space

the set of eigen values of operator

are bounded in the corresponding spaces

has an inverse. Spectrum of each operator pencil

if and only if

We fix in the all operators (1) the parameter

operators, depending on the same parameter

Without loss of generality we suppose

is fixed arbitrarily we missed the index 0 in the

the operator in the space

acting in the space

Construct the resultants of operators 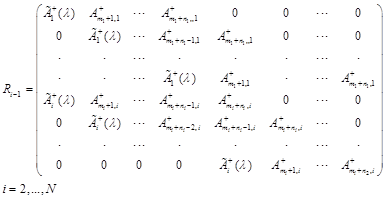 The rows in (8) with the operators

time, rows with the operators

time for all meanings of

act in the direct sum of

are bounded for all meanings of

. Suppose that the eigen and associated vectors of the bundle

form the basis of the space

. It is known they act in the direct sum of

is the linear combination of elements of an aspect

) , corresponding to some common eigenvalue

of both operators. It is clear if

and all other conditions are fulfilled the element of the type

is fulfilled and the element

enters the kernel of resultant of operator bundles

for the first component of the element

expression (9) are fulfilled. From [12] it follows that element of the space

is the linear combination of elements of the aspect

) there is a restricted chain of e.a. vectors of an operator

is the first component of the element of

which has the form

is the eigen vector of the system (1), corresponding to the eigen value

the decompositions of the resultants

are the operator bundles, acting in the space

operator bundles with one parameter

The greatest degree of parameter

in the operator bundle

. Moreover, we have the following result:

Let be all operators

bounded in the corresponding space

operator bundles (7), depending on the parameter

have the common point of spectra if and only if

Remark1. If spectrum of each operator bundle in (7) at each fixed meaning of the parameter

contains only eigen values then the common point of spectra of these operator bundles is their common eigenvalue.

Remark 2. If the spaces

are finite dimensional spaces, then this common point of spectra of (7) is the common eigenvalue of (7).

So we have the

, depending on one parameter

and acting in the space

Without loss of generality we suppose

Denote the operator coefficients of the parameter

act in the space

operator bundles, acting in the space

and depending on one same parameter:

Further, the proof is spent by analogy of the proof the Theorem2. Construct the resultants of the obtained operator bundles

The resultants have the form 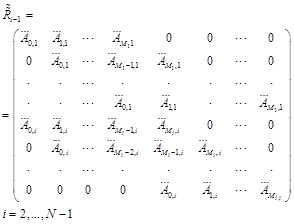 the rows with the operators

times, and the rows with the operators

Theorem 3. The system of operator bundles (1) have a common points of spectra if and only if

, all operators, forming the system (1) and

are bounded in corresponding spaces.

Proof of the Theorem 3.

Necessity. Let the system (1) has a common point

of spectra. Then for fixed first component of

the spectrum of each operator bundle contains only eigen values . From the Theorem1 it follows that

Last means that the system (12) has the eigen value

and there is the non-zero decomposable tensor of the space

. Last means there is non-zero element of the space

(direct sum of the

is the resultant of the bundles

and common for all operator bundles eigenvector.

act in the same Hilbert space- direct sum of

Consider the algebraic system with two variables, when the number of equations is greater than 2.

Instead of the spaces

we adopt the space

play the role of the parameters

are the bounded operators in the space

turn out to the form 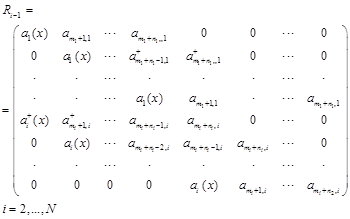 Denote the coefficients at

Accord to our notations we construct the operators 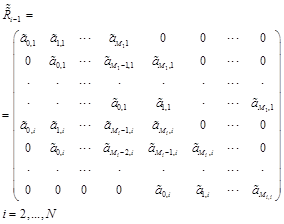 is the resultant of polynomials, obtaining as result of decompositions of the

Theorem 4. The system of polynomials (12) has a common solutions if and only if

In this paper the necessary and sufficient conditions of existence of the common eigenvalue of the two-parameter system of operators in the Hilbert space in the case when the number of operators is greater than the number of parameters are proved. As corollary of this result for the non-linear algebraic system of equations is solved the problem of existence of solutions.