Anatomical Characteristics of Stem and Leaf in Euphorbia hirta L.

Abstract: The stem and leaf anatomical studies of Euphorbia hirta L. were conducted for finding identical traits. The fresh hand sections were stained with safranin and examined under light microscope. Cross section of the stem has a circular shape where epidermis was uniseriate and isodiametric. Cortex was distinctly formed with about 5-6 rows composed of chlorenchyma and found laticifers. Tracheary elements were resembled by vessels and trachieds. In most cases, some pith cells were filled laticifers at young stage and it has a distinct gap or central cavity at maturation stage. In leaf, the epidermis was uniseriate, regular, thin walled, usually similar in diameters and covered with thin cuticle layer. Multicellular uniseriate or gland-like trichomes occur in rugose hairs at epidermis. Mesophyll was differentiated into palisade and spongy layers, was composed of parenchyma cells. The palisade layer assembled with 2 rows of cells. The spongy layer thickness was different around the midrib region, compared with other parts, has 2-6 rows of cells. Laticifers were present at the middle part of the mesophyll. Xylem elements in midrib initiated perfectly and composed of many straight rows of mainly vessels where the phloem elements were abundant and occupied a good part of the vascular bundle as a semicircle shape. The stem and leaf anatomy of this species studied here showed laticifers in cortex zone and pith cells, and middle part of the mesophyll, respectively, was a taxonomic trait for this species.

Euphorbia hirta L. belongs to the family Euphorbiaceae, is native to tropical America, now widespread at low altitudes throughout the tropics and subtropics. It prefers sunny to lightly shaded dry conditions. It is an early colonizer of bare ground. E. hirta is one kind of weed in cultivated fields of perennial crops, grasslands, roadsides, gardens, lawns, fallow lands, ditch banks and waste places. It is a slender- stemmed when mature, annual hairy plant with many branches from the base to top, spreading upto 40 cm in height, reddish or purplish in color [23,15,13].

Euphobia hirta is used in the treatment of gastrointestinal disorders, bronchial and respiratory diseases, and in conjunctivitis. Hypotensive and tonic properties are also reported in E. hirta [5]. The aqueous extract exhibits anxiolytic, analgesic, antipyretic, and anti-inflammatory activities. The stem sap is used in the treatment of eyelid styes and a leaf poultice is used on swelling and boils [5].

Plant anatomy describes the physical form and external structure of plants. It is now frequently investigated at the cellular level, and often involves the sectioning of tissues and microscopy. Studies on anatomy of plants have much significance in different sectors investigation. Anatomical studies can explain where, what, when and how level chemical compounds deposited, cellular changed, cellular abnormalities are occurred. The anatomical studied can be clarified the qualities of the wood properties. Anatomical studies can be a potential tool of taxonomic studies, mainly where there is no reproductive organ [21,14].

The value of laticifer types as a taxonomic marker in systematic comparisons between and within families has been established by Carlquist [4]. The laticifers system of the mature Euphorbia plants was explained by Gaucher [9,10]. In addition, Rosowski [18] studied the branched non-articulated laticifers system in mature tissue of the internode and node in transition from the node to and throughout the mature leaf of Euphorbia supina Raf. More studies in laticifers system in Euphorbia hirta are required.

A few numbers of plants of the Euphorbiaceae family had been studied anatomically priviously. A considerable diversity of stomatal types within anomocytic, paracytic and anisocytic were found in Euphorbia spp. by Kakkar and Paliwal [12]. A comparative anatomical study in leaf has been reported between E. hirta and E. thymifolia [20]. Leaf epidermal studies of E. hirta have been carried out by Essiett et al. (2012). Some internal characteristics in leaf were stated in E. hirta [12]. Epidermal cell adaxial, type of stomata and trichomes were reported in E. hirta [24]. The epidermis, the stomata and the venation patterns have been investigated in E. hirta [2]. Structure and development of fruits and seeds of weed species E. hirta have been stated [7]. The presence of lignified xylem vessel, anomocytic type of stomata was observed in leaf [1]. The internal stem structural study detail in E. hirta is carried out for the first time in this study although leaf anatomy was studied a little earlier. In this report, vegetative organs (stem and leaf) anatomy in cross section was examined for selecting identical character; so as presence of laticifers system in stem and leaf was examined.

Euphorbia hirta L. is naturally grown in different places at Rajshahi University campus, Bangladesh. Some healthy plants with stem, leaf, fruit, flower, and root (Fig. 1A) were collected from campus of Rajshahi University, and stems and leaves were isolated at laboratory using as plant materials. The plant materials were washed under running tap water to remove durt.

The anatomical annotations are of importance in the assessments and appraisals, use of the characters as an effective tool in interpreting phyletic evaluations and systematic delineations [14]. Cross section of the stem was generally circular shape in studied plant. Covering with thick cuticle layer epidermis was uniseriate and isodiametric where epidermal cells were elongated, compactly arranged, bearing unicellular and multicellular trichomes (Fig. 1B). Similarly, these characteristics were reported earlier in E. hirta [20]. Cortex of stems was distinctly formed in the species studied, with about 10-12 rows (Fig. 1B). Both the paranchymatous and chlorenchymatous cells were present in cortex. The cells were rich in chloroplasts, therefore it was chlorenchyma. Laticifers were also present in the cortex zone (Fig. 1B).

The genus Euphorbia has got wavy central cylinder usually because of the bundle cap which prolongated and projected along the phloem positions. This waving may be initiated by two ways: 1) Variations of the vascular bundles positions, so that there are internal vascular bundles and external ones which are alternated, 2) Variations among bundle cap diameters at each two following bundle caps so that one is projected out and the other in [20]. In E. hirta, the central cylinder was slightly wavy, wide and with peripheral position because of their similar size and regular positions of the bundle caps (Fig. 1B). Tracheary elements of wood were resembled by vessels and trachieds, which were in radial rows in the species studied. Xylem parenchyma was distinct within the wood. Wood arms (xylary arms) projected clearly toward the pith that will be single, double or triples (Fig. 1B). The phloem was in external position and usually surrounded by thick fibrous tissue which resemble the bundle caps. The phloem was differentiated by 4-6 narrow parenchymatous layers (Fig. 1B). The sieve elements and other cells of phloem distributed regularly between the bundle caps and xylem, and there were few fibers, or these cell elements present as an islands between the bundle cap fibers. The pith of this species studied has a distinct gap or central cavity at maturation stage. At the immature stage, the pith cells were big, with thin walls and distinct intercellular spaces. Pith cells were similar in shape (usually spherical) and polyhedrals (Fig. 1B). Also laticifers were distinct within the pith and variable in sizes (data not shown). The anatomical structure in the cross section of the stem was in accorded with the general characteristics of the members of the Euphorbeceae [20].

The epidermis of leaf in E. hirta was uniseriate, regular, thin walled, usually similar in diameters (Fig. 1C) and covered with thin cuticle layer in the species studied. Tichomes (multicellular uniseriate or multicellular gland-like) that present on both surfaces of leaves, were surrounded by stellated arranged epidermal cells ranged between 12-14 cells around the base of each hair (Fig. 1C). The most comprehensive description of types of glandular and nonglandular hair and their distribution play an important role in correct identification of the specimen and its classification even to the specific level. Metcalfe & Chalk [14] documented basically three types of trichomes, viz., glandular, non-glandular and stinging types. A key was formulated based upon the presence or absence of trichomes in the two genera of family Euphorbiacaea [3]. Rao & Raju [17] reported trichome types and their distribution in 250 species of the family Euphorbiacea. According to Gales & Toma [8] trichomes found in Euphorbia were simple, unicellular or multicellular, uniseriate. Kakkar & Paliwal [12] presented the same observation.

The studied species possess amphistomatic leaves bearing anomocytic and anisocytic stomatal complexes, as well as paracytic stomatal complexes seen on adaxial side. Generally stomatal complexes occur only on the lower surface (hypostomatic leaves) (data not shown). Metcalfe and Chalk [14] stated the presence of amphistomatic leaves in some species of Euphorbia. Raju & Rao [16] reported presence of paracytic stomata as most common. Same studies recorded on anisocytic, anomocytic, and diacytic stomata in 50 species belonging to 17 different tribes of the Euphorbiaceae. In their opinions the paracytic type forms the basic stomatal type for the family Euphorbiaceae because of common occurrence in majority of tribes studied. Sehgal & Paliwal [19] investigated 150 species of the genus Euphorbia and stated that most of the stomatal type recognized for dicotyledons met with in the genus Euphorbia. Kakkar & Paliwal [12] observed anomo, aniso, para and cyclocytic type of stomata in various species of the genus Euphorbia.

Mesophyll was differentiated into palisade and spongy layers, was composed of parenchyma cells which were variable in size. The palisade layer was on the adaxial side of the leaf and composed of 2-rows of (elongated at right angles to the epidermis) cells. Because of that, this plant was xerophytes, the palisade layer was increased into two rows so that obtaining of the energy can be suitable for the photosynthesis. The spongy layer was in a good growth in general, and their cells were spherical and subspherical with big and small intercellular spaces (Fig. 1C). The spongy layer thickness was different around the midrib region, compared with other parts, so it has 2-6 rows of cells. Laticifers were present in the middle part of the mesophyll and usually between palisade layer and spongy layer, as it was clear in leaf vertical sections (Fig. 1C). Vascular bundle shape in leaf can be seen in cross section as a subcircular, and these bundles occupied third part of the section in the species studied. The xylem elements initiated perfectly and composed of many straight rows of mainly vessels. The xylem elements were surrounded internally by variable parenchyma cells (Fig. 1C). These parenchyma cells were different in size, so that vascular bundle may be enclosed completely by parenchyma cells. Vascular bundle phloem elements were abundant and occupied a good part of the vascular bundle as a semicircle shape. The same findings observed in the investigation of leaf anatomy of E. hirta [1]. 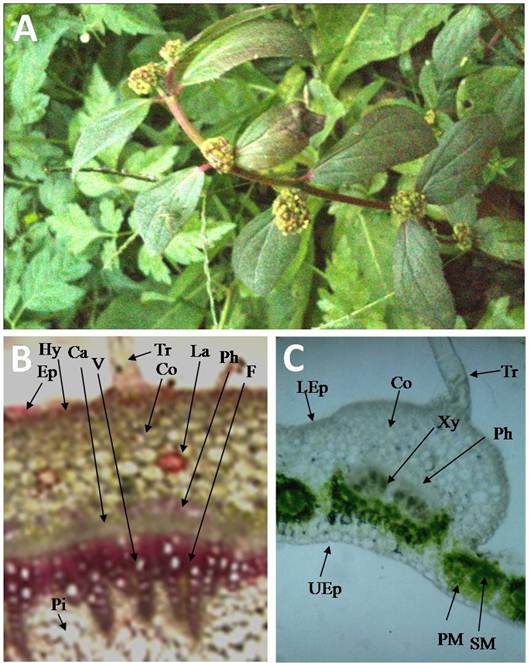 A) Photographs of plants with flowers and simple leaves.

To summarize this effort, it is so far indicated that stem and leaf external and internal anatomy studies conducted. This study provides important data especially laticifers system for identification as well as a contribution towards a better knowledge of the genus Euphorbia. In conclusion, it was obtained that stem and leaf anatomical charateristics of E. hirta species studied here were of considerable value and will be proved the classification of this genus based on anatomical results.