Abstract: Faba bean (Viciafaba L.) is widely cultivated in Ethiopia next to China. Faba bean (Viciafaba L.) is a partially Allogamous grain legumes grown for its high protein content in seed. The edible protein in the seed is used for human and animal consumption. The crop contributes to soil fertility through biological N-fixation. Though it is grows in many part of the country, the national average yield is very low due to multiple factors such as limited availability of stable high yielding and disease resistant cultivar. To this end, an experiment was conducted at Sinana, Agarfa, Adaba and Sinja for two years (2013-2014) to investigate the genotype x environment interaction and identify stable high yielding genotypes. Fifteen genotypes including the improved and local checks were grown in RCBD. Additive main effects and multiplicative interaction (AMMI) analysis was used to estimate genotype x environment interaction and found to be significant (P<0.01). The principal components (IPCA1) and (IPCA 2) explained 52.8% and 47.2% of the interaction, respectively. Mean grain yield of genotypes ranged from 2.6t/ha to 4.2t/ha with grand mean of 3.3t/ha. Most of the genotypes were highly responsive to the testing environment and adapted to more favorable environments. Genotype EH03014-1 and EKLS01013-1 gave higher grain yield than the checks, showed linear regression coefficient close to unity and deviation from regression close to zero. This implied that the two candidate genotypes showed stable performance across locations. Furthermore, EH03014-1 and EKLS01013-1 are resistant to major disease and showed20.41% and 14.58% grain yield advantage over the standard check, respectively. Based on their performance across locations, stability parameters, and their yield advantage over the checks, these two genotypes were selected as candidate varieties for verification in the coming bona 2016/17 cropping season.

Faba bean (Vciafaba L.) is one of the major pulses grown in the highlands (1800-3000m asl) of Ethiopia. Ethiopia is the second largest producer of faba bean worldwide, after the People’s of Republic of China [7]. Currently, faba bean occupies, 31% of the total area cultivated for pulses in Ethiopia, with 34% of the total annual production in the country [4]. In the highland of bale zone where cereal mono cropping is the dominant practices, pulse crops like faba bean plays great role in improving soil fertility and in reducing the disease pressure developed from continuous cereal mono cropping. Furthermore this crop has high economic value with its edible seed serving as an important protein complement in the cereal based Ethiopian diet, particularly for the poor who cannot afford animal protein [7]. Also serves as a food crops and also used as cash crops in the highlands of bale zone, southeaster Ethiopia.

However the faba bean cultivars that used for production purpose by the farmers in the highlands of bale zone were low in yield, susceptible to some major faba bean diseases and gave unstable yield.

Studying involving large number of genotypes and locations provide useful information on the adaptation and stability of genotypes and also on similarities of locations [1]. Furthermore, [8] indicated that yield potential is a complex process which is affected by genotypes, environment and genotype x environment interaction. In addition, measuring a separate expression of each physiological process is not practical. Their different expressions are however, measured in total grain yield. Several statistical methods may be used to analyze and interpret grain yield performance of genotypes x environment interaction. However, Additive Main effects and Multiplicative Interaction (AMMI) model has been found to be more accurate in estimating yield of genotypes with in locations than unadjusted mean [3,10]. Besides, AMMI can treat both the additive main effect and multiplicative interaction component employing the analysis of variance (ANOVA) and Interaction Principal Components (IPCA), respectively. AMMI stability value (ASV) also measures the stability of a given genotypes. It measures the distance from the genotype coordinate point to the origin from the IPCA scores of the genotypes [5]. Genotypes with the lowest ASV values are more stable than genotypes with higher ASV value. Thus, the purpose of this study is thus to apply the stability parameters on the 15 faba bean genotypes grown in eight environment and identifying varieties with high and stable yield.

Twelve faba bean genotypes were evaluated against two standard one local checks under rain-fed condition for two consecutive years (2013-2014) during bona cropping season at Sinana main station, Agarfa and Adaba sub sites, and Sinja farmers’ field. The experiment was conducted at each location on vertisols, texturally clay loam soil. Sinana Agricultural Research Center (07o 07’10.837"N latitude and 040o13’32.933"E longitude; and 2400m a.s.l.) is located 463 km south east of Addis Ababa and 33km East of Robe, the capital of Bale zone. Sinja is located 50-km from Sinana and about 15 km from Robe in the southwest direction. Agarfa and Adaba is found at a distance of 60km and 100kmin the south-west and west of Sinana, respectively. A Randomized complete block design with three replications was used at all locations. The plot size was 6.4m2; four rows of 40cm spacing between rows and 4m length. The central two rows were used for yield and other agronomic data collection (3.2m2 harve stable area). The seed rate of 200 kg/ha and the recommended fertilizer rate of 100kg DAP/ha was used at planting. Statistical AMMI analysis of grain yield was done using CropStat7.2 computer programme [2].

Table 1. Lists of genotypes and source of the test entries.

The mean grain yield of genotypes across environment (year x location) ranged from 3.06 to 4.13t/ha. From all the genotypes, the local check was the lowest yielding (Table 2). The highest grain yield was obtained by genotype EH03043-1 followed by EKLS01013-1. These two genotypes have yield advantage of 20.41% and 14.58% over the standard check. The range for day to maturity was from 140 to 143 days. Plant height of the genotypes was ranged from 138-146cm whereas thousand seed weight also ranged from 571 to 800gm. Furthermore most of the genotypes showed moderately resistance to the major faba bean diseases (Table 4). The highest mean grain yield of the genotypes was obtained in Sinana location followed by Adaba, Sinja and Agarfa. The variation among the locations was almost similar except for Sinana (Table 3). The results indicated that specific and wide adaptations were equally important as suggested by [6].

Table 5. Analysis of variance for the Additive Main effect and Multiplicative Interaction (AMMI) for grain yield of 15 genotypes over environment.

The bioplt interaction graph also revealed genotype EH03043-1 was the most stable genotype as it is coordinated to the origin in the graph (fig 1). Variety, Degaga, though it is closed to the origin, it has regression coefficient value of 1.02and has mean grain yield lower than the grand mean indicates as this variety is sensitive to changing environment. 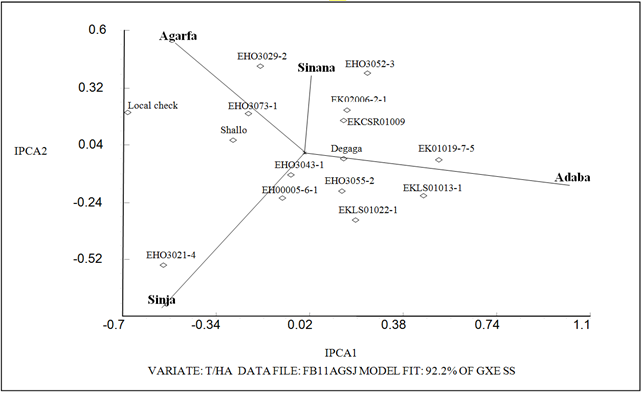 The study has indicated that the AMMI model can summarize the pattern and relationship of genotypes and environments. Furthermore from the three stability indicator parameters, linear regression coefficient, mean grain yield performance of the genotypes over the environments and the deviation from the regression indicates the two genotypes, i.e. genotype number 10 and 8 are highly stable over the studied environments. Furthermore, the yield advantage over the checks, and their reaction to the major faba bean disease in the studied area, revealed that the two genotypes were identified as candidate varieties to be verified in the 2016/17 bona cropping season.