Abstract: Genetic diversity among 64 CIMMYT and BARI developed maize inbred lines was conducted at the research farm of Plant Breeding Division, Bangladesh Agricultural Research Institute (BARI), Joydebpur, Gazipur, Bangladesh during Rabi season 2012-13. The genotypes were grouped into six clusters. Cluster III comprised the maximum genotypes (18) which indicated the genetic similarity among them. The minimum genotype (4) was contained in the cluster V. The highest inter-cluster distance was observed between cluster VI and III (9.37) followed by cluster VI and V(8.22) and cluster V and I (7.75) suggesting wider diversity between them and the genotypes in these cluster could be used as donor parents for new maize hybrid development. The highest intra-cluster distance was observed in cluster V (0.846) and the cluster II was had the least intra cluster distance (0.472). The mean values of cluster VI recorded the highest for thousand seed weight (360.80 gm) and yield per hectare (4.72 ton/ha). It appeared that the early maturing genotypes were included in the cluster V (147.75). The positive absolute values of the two vectors revealed that ear height, ear diameter and yield (t/ha) had the greatest contribution to genetic divergence. The negative values for the two vectors for days to 50% tasseling, ear length and thousand seed weight (TSW) indicated the least responsibility of both the primary and secondary differentiations.

Inbred lines are the prerequisite for hybrid variety development in crop plants. For developing high yielding hybrids in maize, inbred lines need to be developed and evaluated for their diverged gene pool. The genetic diversity between the genotypes is important as the genetically diverged parents are able to produce high heterotic effects [1], [2]. Several studies on maize have shown that inbred lines from diverse stocks tend to be more productive than crosses of inbred lines from the same variety [3], [4]. Manifestation of heterosis usually depends on the genetic divergence of the two parental varieties [5]. The quantification of genetic diversity through biometrica1 procedure made it possible to choose genetically diverse parents.

Genetic diversity in maize is a valuable natural resource and plays a key role in hybrid breeding program. Knowledge of germplasm diversity and the relationship among elite breeding materials has a significant impact on the improvement of crop plants [6]. In maize, this information is useful in planning crosses for hybrid and line development, in assigning lines to heterotic groups, and in plant variety protection. Evaluation of genetic diversity is important to know the source of genes for a particular trait within the available germplasm [7].

The importance of genetically diverse genotypes as a source of obtaining transgressive segregants with desirable combinations has been reported by several workers [8]. Genetic resources are, in the sense, the building blocks and also fundamental not only to a crop improvement program, but also for the very survival of the species in time and space [9]. Moreover, evaluation of genetic diversity is important to know the source of genes for particular trait within the available germplasm [7].

In view of above importance, the present investigation was carried out to identify genetically diverse parents for hybridization.

The experiment was conducted at the Research farm of Plant Breeding Division, Bangladesh Agricultural Research Institute (BARI), Joydebpur, Gazipur, Bangladesh during Rabi season 2012-13. Sixty four exotic and locally developed maize inbred lines included in the study. Seeds of the sixty four inbreds were sown on 23 November 2012 in Randomized complete block design with three replications. Each entry sown in two rows of 5m long maintaining a spacing of 75cmx25cm. One plant was kept per hill after thinning. Fertilizers were applied at the rate of 120,35,70,40, and 1.5kg/ha of N,P,K, S, and Zn, respectively. The other intercultural operations were done accordingly. Data on plant and ear height, thousand seed weight and field weight were recorded from 10 randomly selected competitive plants for each treatment in each replication. But for days to 50% tasseling, days to 50%silking and maturity, thousand grain weight and yield per hectare, which were recorded on the plot basis and yield was converted to hectare. Statistical analysis was made from the mean of 10 plants. Data were analyzed followingMahalanobis’D2-statistics. The method proposed by [10] was used for intra-cluster and inter-cluster distance, cluster mean and contribution of each trait towards the divergence.

The analysis of variance revealed highly significant differences among the inbreds for all the ten characters indicated the sufficient genetic variability among the tested inbreds. The sixty four inbreds were grouped into six.

Clusters using the non-hierarchical clustering method by Genstat Version 5.2 software programme in such a way that the genotypes within the cluster had smaller D2 values among themselves than those belonging to different clusters (Table 1). The maximum number of inbreds (18) was comprised into cluster III suggesting overall genetic similarity among them which was followed by cluster IV (14) and II (13) whereas cluster I and VI was consisted of 10 and5 genotypes, respectively. The minimum inbreds (4) comprised into cluster V. 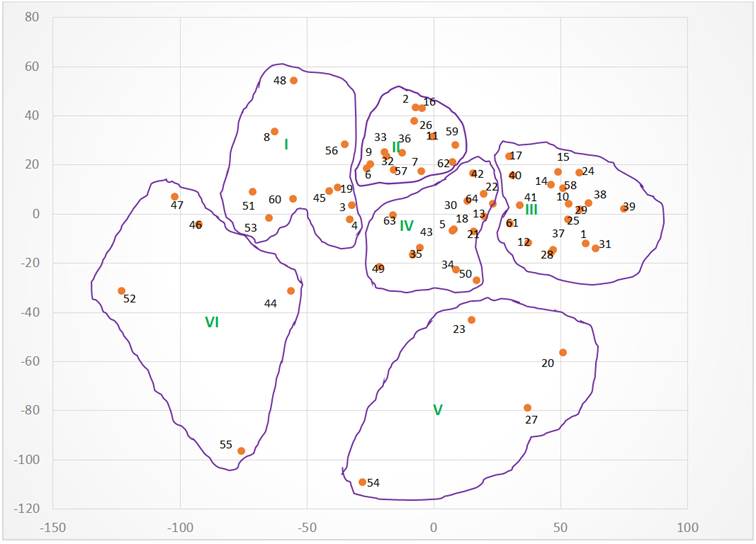 Figure 1. Scatter distribution of 64 maize inbreds based on their principal component scores superimposed with clustering (1….. 64= serial no. of maize inbred lines).

The highest yield was produced by the cluster VI (4.72 t/ha) followed by cluster I (3.77 t/ha) and that of the lowest yield was recorded in the genotypes of the cluster II (2.66 t/ha) followed by cluster III (2.77 t/ha). Considering all the characters it appeared that the genotypes in the cluster VI had good performance. The genotypes in this cluster had relatively shorter growth duration, lower days to 50% female flowering, bold grain size and the maximum yielding ability. Cluster I also showed intermediate grain size and reasonable yielding capacity. These findings were in accordance with [16] and [12].

4.2. Contributions of Characters Towards Divergence

Contributions of characters towards divergence were estimated through canonical variate analysis. In this method, vectors of canonical roots were calculated to represent the genotypes in the graphical form [17]. The coefficients pertaining to the different characters in the first two canonical roots are presentedinTable 5. The positive absolute values of the two vectors revealed that ear height, ear diameter and yield (t/ha) had the greatest contribution to genetic divergence. The negative values for the two vectors for days to 50% tasseling, ear length and thousand seed weight (TSW) indicated the least responsibility of both the primary and secondary differentiations. However, the positive absolute values of vector-1and negative absolute value for vector-2 for the characters like days to pollen shedding, days to maturity indicated the responsibility of primary differentiation. It was supported by [13]. Responsibilities of secondary differentiation were noticed in days to 50% silking and plant height.

Table 5. Relative contributions of the 10 characters to the total divergence in maize.

According to [1], [18], [19] genetically distant parents usually able to produce higher heterosis. [20] reported that the clustering pattern could be utilized in choosing parents for cross combinations which likely to generate the highest possible variability for effective selection of various economic traits. The positive absolute values of the two vectors revealed that ear height, ear diameter and yield (t/ha) had the greatest contribution to genetic divergence. From the above findings, the present study indicated that the cluster VI, I, IV and V showed higher distance between them. Parental material selection from those clusters would provide manifestation of heterosis as well as wide range of variation during hybridization.