Abstract: Infectious diseases are one of the foremost causes of mortality and morbidity. In addition, day by day infection causing microbes are becoming resistant and modifying themselves into multi-drug resistant strains. So there is a crucial need to introduce new antibiotics to fight against these pathogens. The synthetic antibiotics are effective, but unsafe as well as are not consistent to use owing to the resistance building capacity of the microbes. Consequently, there is greater need for alternative treatments. Medicinal plants are store house of various types of phytochemicals and considered as a potential therapeutic remedy for numerous ailment. Therefore the aim of the present study was to evaluate the antibacterial activity of the leaves extract of Cajanus cajan (C. cajan) L. against coliform bacteria collected from tannery, tobacco and sugar mill waste water. In this study fresh leaves of C. cajan was extracted by using ethyl acetate, chloroform and n-Hexane. The antibacterial activity of these plant extracts was determined by measuring zone of inhibition (ZI) using the Agar disk diffusion method and minimum inhibitory concentration (MIC) was determined by using the microbroth dilution method. Among three extracts highest (25±0.18 mm, ZI) antibacterial activity was reported by ethyl acetate extract of C. cajan leaves against coliform bacteria isolated from sugar mill waste water at the highest concentration with respect to chloroform and n-Hexane extracts. In addition, antibacterial activity was also higher for ethyl acetate extract against coliform bacteria isolated from tannery and tobacco waste water compared to remaining extracts. The MIC of the ethyl acetate extract ranged 550 to 570 µg/ml. Therefore ethyl acetate extract of C. cajan leaves could be used as antibacterial agents against diseases caused by coliforms.

In the history of human ancestry plants have been used for human being owing to various medicinal properties even in modern time have formed many pharmaceuticals on the basis of plant and plant materials [1, 2, 3]. It produces a vast amount of secondary metabolites as defense against environmental stress and other factors like pest control, wound and injuries [4, 5, 6]. In case of human being pathogenic bacteria have always been suggested as one of the major cause of various diseases [7]. Worldwide drug resistance is now a matter of great concern, although pharmaceutical company has continuously generated in various types of antibacterial agents [8]. Search of new drugs is an increasing incidence in many researches due to the adverse side effect associated with conventional drugs, resistant to antibiotics and to combat the multi-resistant microorganism [9-12].

Cajanus cajan (C. cajan) L. is known in Bengali as Orhor Dal belongs to family Fabaceae [20]. This plant is an annual perennial shrub largely cultivated in tropical and subtropical region in the world, typically in a dry climate [20]. Different parts of this plant are used in the management of disorders such as diarrhea, diabetes, cough, sores and ulcer in South America, Asia and Africa [21-24]. Leaf pest is used in oral ulcer, inflammation and for inducing lactation [25]. Lactone and the stilbenes (longistylin A, longistylin C and cajanin) isolated from leaves of C. cajan has antibacterial and hypocholesterolemic effects respectively [26, 27]. Pinostrobin isolate from leaves possess anti-inflammatory activity [28]. This plant also possesses antihelmenthic, antiparasitic, antifungal, antitumor, antioxidant and antidiabetic activities [29].

Therefore the aim of this study was to evaluate the antibacterial activity of C. cajan L. leaves extracts against coliform bacteria from industrial waste water of Kushtia, Bangladesh.

The chemicals used in this study were purchased from native sources and were of analytical grade. Cloxaciline (10 μg/disc) was purchased from Sigma-Aldrich, USA.

2.2. Collection and Identification of Plant Materials

2.3. Drying and Grinding of Plant Materials

Collected leaves were cleaned and shaded dried for several weeks. The dried leaves were pulverized by a mechanical grinder and passed through a 20 mm mesh sieve.

Dried and powdered C. cajan leaves (40 g) were extracted with 200 ml of ethyl acetate, chloroform and n-Hexane. The crude plant extracts extracted with solvents were filtered by using Whatman (No. 1) filter paper and were concentrated through the rotary evaporator at 55°C and stored until needed for bioassays at 4°C.

The samples collected from industries were serially diluted using peptone water. One (1 ml) of each waste water sample was pipetted into one sterile test tube containing 9 ml peptone water in order to make 10-1dilution. Therefore, further 10-3, 10-6and 10-9 dilution were made by the same way. From last three dilutions 1 ml of sample was transferred into Durham’s tubes containing 9 ml of prepared Peptone Agar Broth (Merck KGaA, Darmstdt, Germany). The tubes were covered with cotton wool and incubated for 24 hrs. The tube was observed for gas production which was recorded accordingly. Therefore, the samples from each form of the gas producing tube were spread onto the surface of MacConkey Agar plate and then incubated at 37°C for 24 hrs for observation of colony characteristics. For the enumerations of coliform count using most probable number (MPN) were adopted as per the techniques described by FAO/WHO (1979). Nutrient agar media were used as negative control.

The dried extracts were dissolved in same solvent used for their extraction and sterilized by filtration using 20 µm sterile millipore filter. Then the antimicrobial test was carried out by the Agar disk diffusion method [30] using 100 µl previously prepared standardized inoculumn suspension containing 107CFU/ml of bacteria. Standard antibiotics, cloxaciline 10 μg/disc (Sigma-Aldrich, USA) were used as positive control. The plates were incubating at 37°C for 24 hrs for further investigation. Antimicrobial activity was evaluated by measuring zone of inhibition (ZI) generated against the tested bacteria. Each test was performed three times.

Minimum inhibitory concentration (MIC) of the plant extracts was determined according to laboratory protocol published by Rene S Hendricsen 2003 [31]. Active culture for MIC determination were prepared by transferring a loopful of cells from stoke culture to flask of autoclaved trypticase soy broth (TSB, Loba Chemic Pvt. Ltd, Mumbai, India) medium and incubated at 37°C for 24 hrs. Further, TSB medium was prepared by incorporating the leaf extract to a concentration range 0 to 1000 µg/ml. Two milliliter of TSB was then transferred to culture tube and incubates with 20 µl of bacterial suspension (10-7 CFU/ml). The control tube contains only suspension and not the leaf extracts. The MIC was determined after macroscopic evaluation of culture tube which did not show any visual growth of the tested organisms and expressed in µg/ml.

The results of this study were expressed as mean±SD. MS Excel 2010 (Roselle, IL, USA) was used for the statistical and graphical evaluations.

The dilution time and the number of colonies generated on the surface on MacKoncy agar media and nutrient agar as negative control are shown in Table 1. Numbers of the colored colony (Figure 1) formed on McKoncy agar media proved that the bacteria were coliform [32-37]. 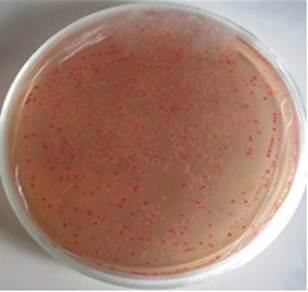 Table 1. Dilution time of samples and the growth of colony from the diluted sample on MacConkey and nutrient agar medium.

The lowest ZI produced by the n-Hexane extract of the C. cajan leaves at the concentration of 62 mg/ml was 5±0.11 mm offered in Table 2. No ZI was reported for control. All the extract produces a significant zone of inhibition. From the data it is seen that the ethyl acetate extract produces greater zone of inhibition than chloroform and n-Hexane extracts that means that the extractability of this plant compound is enlarged according to the polarity of solvent as ethyl acetate ˃ chloroform ˃ n-Hexane. This might be the results of high extractability of the ethyl acetate. This is harmonized with the findings of Srinivasan et al., who stated that variation in extraction power of the solvents is due to the variation in the solubility of the phytoconstituents to the solvents. [39]. However, the antibacterial activity of plant extract is also depends on the concentration, parts of the plant used as well as the microbes tested [40].

Table 2. Diameter of zone of inhibition of ethyl acetate, chloroform and n-Hexane extract of C. cajan leaves and cloxaciline against coliform bacteria.

Values were expressed as mean±SD 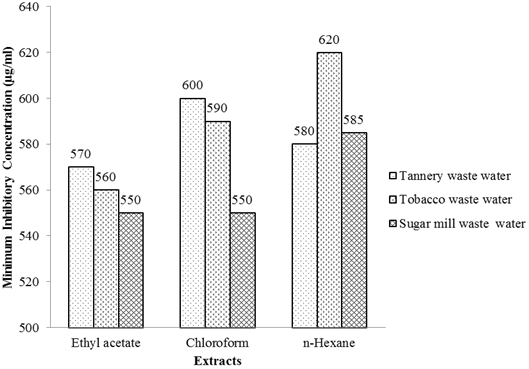 The low MIC values confirm that high antimicrobial activity of the extract. Here ethyl acetate extract of C. cajan leaves showed higher antibacterial activity against coliform isolates. In a previous study it was shown that extract of C. cajan has antimicrobial activity against some selected organism [41, 42, 43] and leaves contain more bioactive compound than the seed [44]. Coliform and its closely related bacteria has been selected as an indicator of harmful organisms in drinking water and its presence in waste water could be related to improper disposal of sanitary waste and potential health risk exists for individuals exposed to this water.

In our study ethyl acetate extract show potential antibacterial activity against coliform bacteria isolate from waste water. Thus, this extract could be used for antibacterial agent and treatment of diseases caused by the isolated coliforms from industrial waste water.

The present investigations have shown that ethyl acetate extract of C. cajan L. leaves showed potent antibacterial activities on coliforms than chloroform and n-Hexane extracts with the MIC values ranging from 550 to 570 mg/ml. Hence, ethyl acetate extract of C. cajan leaves could be used as antibacterial agents against diseases caused by the isolated coliforms from industrial waste water although further studies are recommended to characterize the active compound(s).

The authors proclaim that they have no conflict of interests regarding the publication of this article.

The authors wish to thank the Department of Biotechnology and Genetic Engineering, Islamic University, Kushtia, Bangladesh.