Around Thiruvalangadu, an occurrence of a basal conglomerate composed of both grey coloured and pink coloured carbonatitic lava materials (enriched with U, Pb, Zr, Hf, Nb, Ta, REE, Y, Ba, Sr, P, S, F etc.) cemented with medium grained to coarse grained sand, clay and calcareous materials (Figure 1 and 2) is exposed between Mio-Pliocene sandstone and boulder beds of Pleistocene1,2,3. The area of conglomerate occurrence exceeds over 90 km4. It appears that black or grey coloured carbonatite lava eruptions took place earlier and just before the eruptions of the pink coloured carbonatite lava in this area. Pink carbonatites are richer in silica and alkalies than grey carbonatites. Both black and pink coloured carbonatite lava materials are very fine-grained in nature. The crystalline feature of individual grains is visible only above the magnifications over 5000X. Size and shape of linear vesicles widely vary and parallel to the flow bandings of calcite microlites. They are essentially composed of calcites with accessories of olivine, alkali amphibole, biotite, wollastonite and quartz. Topaz is found very rarely. It has prismatic and pyramidal faces with well developed (001) cleavages. Its size is measured 2 x 1.5 /span>m at 10000X and it is observed in the pink carbonatite material (Fig. 1a). It is a plate like mineral (thickness >0.2 /span>m) formed at the interstitial spaces of well developed calcite crystals with rhombohedral cleavages (Figure. 3a). Abundant free spaces are seen between intergranular boundaries and crystal imperfections of these calcite grains. 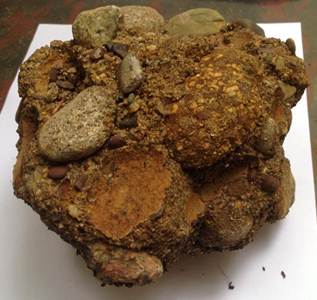 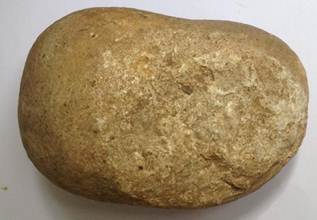 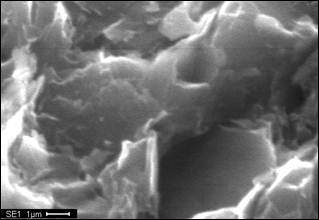 Figure. 2a. Back sacttered image of carbonatite lava studied under 10000X. 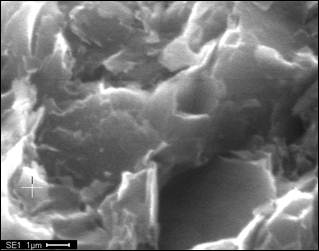 Figure. 2b. Back scattered image of carbonatite lava and topaz crystal at the + marker at 10000X. 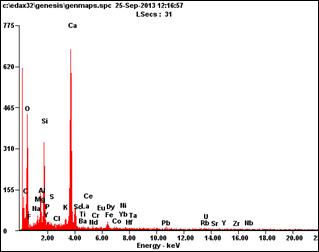 Figure. 3a. The composition of topaz crystal. 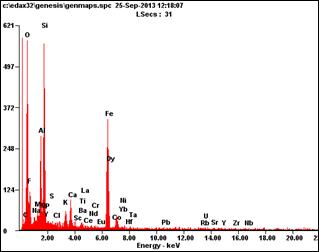 Figure. 3b. The composition of pink carbonatite lava.

Topaz consists of SiO4 tetrahedral groups linked together with octahedral groups around Al. Four oxygen ions from SiO4 and 2 anions of F or OH surround Al ions. The structural formula of the topaz is Si4 (Si1.172Al2.296/sub>Fe3+2.133Mg0.307Ca 0.347Na0.335K0.293 Ti0.088 P0.053S0.079)7.104 (F5.517OH5.482)10.998. The tetrahedral site greatly enriched Si ions however the octahedral site is highly deficient in Al ions. This deficiency of octahedral site could not be compensated by entry of excessive Si ions and conversion of all the iron into ferric iron and other ions present in the octahedral site. Over saturations of nearly 3 ions of OH and F indicate that OH ions play critical role on the crystallization of topaz from a residual fluid derived from the carbonatite melt in its end stage of consolidation. Approximately 50 per cent of (OH, F) group taken up by the OH, reveals that it is the highest OH values so far recorded. Further, F/OH ratio is dependent on the fugacity of HF and H2O at the time of crystallization of the mineral. The deficiency of octahedral group may be compensated by the entry of certain trace elements characteristic of carbonatite melt. The hydroxyl bearing ferrian topaz is an unnamed analogue of topaz4,5,6,7. The trace elements in ppm present in the topaz and the bulk composition representing carbonatite respectively are Sc 150,30; Y 630, 390; La 330,110; Ce 370,0; Nd 230,70; Eu 250,110, Dy 1120,190; Zr 1220, 670; Hf 430, 360; Nb 1260, 500; Ta 340, 200; Pb 980, 800; U 1720, 1120; Rb 350, 300 and Cl 200,70. All these trace elements are relatively more concentrated in the topaz than in the carbonatite tuff. These incompatible elements are characteristically enriched in the residual fluid representing the composition of topaz crystallized from the carbonatitic melt during its final stage of consolidation than the carbonatite lava.

Si+Al is generally concentrated during the course of crystallization and fractionation of carbonatite magma. Similarly F as an incompatible element crystallizes only at the late stages of magmatic differentiation as individual minerals. A positive correlation is seen between the co-variation of (Si+Al) and F (Figure. 4a). Increase of F atoms against decreasing O atoms show the trend of crystallization of topaz. However after reaching a threshold peak, decreasing trend of F atoms with increasing of O atoms indicates the concentration of hydroxyl ions during late stages of consolidation of carbonatite lava (Figure 4b). This feature further illustrates that fugacity of water vapour was preceded with development of fugacity of F. The continuous depletion of F atoms with increasing trend of O atoms indicates increasing fugacity of water vapour during late stages of consolidation of carbonatitic lava.

Topaz crystallization was affected by gaseous emanations during consolidation of carbonatite lava at low pressure volcanic condition. The bulk composition of the carbonatite lava was undergone bulk chemical change during its eruption or effusion depending up on its volatile content. Under volcanic state, the dissolved gases such as H2O, H2CO3, H2S, HCl, HF, etc. which released from the carbonatite melt concentrate in vesicles, voids and intergranular boundaries of crystallizing minerals. It is conceivable that in the final stages still uncrystallized part of the lava has more resemblance to a solution of mineral matter in superheated state. When solidification is nearly complete, the gases can no longer be retained and make their escape through grain boundaries to vesicles and voids. Aqueous solution dissolved these gases acts as powerful agent in attacking minerals forming topaz, apatite, biotite and other ore-forming minerals. Assuming bulk composition of carbonatite lava representing as the parent material for the crystallization of topaz and the composition of topaz as aqueous residues solution, an addition and subtraction diagram on the basis of 24(O,OH, F) was constructed (Figure 5a, 5b). This diagram indicates that considerable amount of Si, Al, Fe3+ OH and F were to be added with depletion of Ca and CO2 ions. The high concentration of OH ions indicates that the siliceous carbonatite lava contains significant amount of water vapour in addition to F ions. Si+Al rich carbonatite relatively viscous lava possessed high content of F and OH during the course of its rapid consolidation. Relatively greater degree of escape of OH ions than the escape of F ions, F was concentrated during late stage crystallization of topaz. This feature indicates that during eruption or effusion great quantity of water vapour was accompanied with carbonatite lava.

The volcanic rock of carbonatite lava/ tuff was rapidly consolidated under sudden decrease of pressure and temperature to atmospheric state within a few days or hours of duration to achieve equilibrium state at Earth surface after its eruption or effusion. Volatiles concentrated residual fluids were very similar to composition of topaz. Generally, fenitizing residual fluids evolved by crystallization and differentiation leading to comagmatic alkali syenites and carbonatites from nephelinitic parent magma are sodium rich and strongly silica deficient8. The fenitizing solutions are strongly alkali and oxidizing. During the course of fenitization of migmatite gneiss around carbonatite quartz, feldspars, biotite and chlorite are replaced by alkali pyroxene and amphibole, nepheline and alkali feldspars. The experimental studies of the system CaO-(MgO+FeO*)- (SiO2+Al2O3+TiO2)-CO2 at 1 GPa mantle pressure temperature conditions reveal that development of residual solutions of both silica undersaturated alkali rich solution as well as silica over saturated are possible with immiscible boundary of two liquid fields9. Occurrence of wollastonite and quartz bearing carbonatites are also common. The presence of topaz, wollastonite, quartz and biotite in the carbonatite lava indicates, the lava was consolidated under high OH and F rich conditions. The composition of residual solutions depends upon the initial crystallization and fractionation of silica saturated or undersaturated minerals from chemical composition and nature of the parent magma10. During volcanic eruption or effusion of carbonatite lava, its volume increases owing to sudden decrease in pressure. The volume expansion of carbonatite lava releases gaseous constituents and residual aqueous solutions from it. The residual aqueous fluid traversing through intergranular boundaries of subsolidus carbonate minerals was caused crystallization of topaz and biotite at interstitial places of carbonate minerals. The solubility of Zr in the residual solution increases solubility of hydroxyl ions during crystallization of topaz7. Further the crystallization of ferrian topaz indicates its peralkaline nature of the residual solution7

The characteristic enrichment of trace elements of Zr, Nb, Sr, Y, Sc RE, and U reveals the carbonatitic affinity of the topaz. The very rare occurrence of ferrian hydroxyl topaz in the carbonate rock further confirms pneumatolytic action of carbonatite lava during its final consolidation. Such type of pneumatolytic action usually found in pegmatitic fluids is quite possible during rapid consolidation of a very fluidly carbonatite magma at near surface condition in the course of its eruption due to changes in viscosity of the melt similar to miarolytic crystallization with co-existence of phenocrysts, matrix and vesicles together.. The mode of occurrence of grey and pink coloured carbonatitic bombs, lapillus, pisolites and ash materials in semi-unconsolidated conglomerate lying between Mio-Pliocene sandstone and Pleistocene boulder bed indicates bimodal volcanic activities that took place between these periods in Tamil Nadu.