Abstract: The oral route is the most preferred route of administration of drugs because of low cost of therapy, ease of administration, patient compliance and flexibility in formulation. The illness are associated with fever, head ache and body aches so to cure the above/relief from the above, there was need to adminster the drugs to the individuals but in case of pediatric patients it was difficult to administer the dosage forms like tablets, capsules, etc. In the present investigation an attempt has been made to prepare and evaluate the sugar based medicated tramadol hydrochloride hard lozenzes for pediatrics to overcome the administration. They were prepared by heating and congealing method on laboraty scale with malt syrup as base. All the formulations were subjected to various physico-chemical parameters such as hardness, friability, content uniformity, weight variation, thickness, drug content and in vitro dissolution studies. Drug-excipients compability stuidies were conducted by FT-IR spectroscopy and results revealed that no interactions were found between drug and excipients. The results of in vitro drug release studies showed that formulations F3, F6 and F9 releases the drug 96.72,95.32 and 98.66 percentage at the end of 30 mins. The hard lozenge can provide an attractive alternative formulatin in the treatment of pain in pediatric patiants.

In oral drug delivery, the mucosa of the mouth may appear to differ little from the rest of the moist lining of the gastro intestinal tract1,2. In fact, with the notable exceptions of the esophagus and uterine cervix, this tissue is remarkably different from all other mucosa of the body, and probably has more in common with skin, with which it is forms, a junction at the lips, than with the intestinal mucosa. The use of the oral mucosa for drug delivery has led to the tendency, at least in the dermatological literature, to regard oral mucosa as a highly permeable tissue. There are many dosage forms like Lozenges, tablets, inhalers, and syrups, are in markets for the treatment of the various diseases. The "Lozenges are flavoured medicated dosage forms intended to be sucked and hold in the mouth or pharynx. These preparations are commonly used for the purpose of local or systemic effect 3, 4". Advantages of the Lozenges as dosage forms include increasing bioavailability, reduction in gastric irritation, bypass of first pass metabolism and increase in onset of action. New drug design to this area always benefit for the patient, physician and drug industry. There are several dosage forms like in the market, there is a need for more dosage forms which acts effectively and locally asa well as systemically. Oral thrush is a disorder caused by infection of the mouth due to fungus (yeast) candida albicans. In babies it may be a severe infection sometimes causing epidemics in schools by cross-infection5.

Tramadol hydrochloride tablet lozenges are flavoured medicated dosage forms intended to be sucked and hold in mouth/pharynx. The present investigation is designed to improve patient compliance and these preparations are commonly used for the purpose of local or systemic effects through the buccal mucosa. Advantages of the Lozenges 6,7as dosage forms includes increases in bioavailability, reduction in dose size, and reduces gastric irritation, bypass first pass metabolism. When it is not effectively treated, oral thrush often leads to hospitalization, limitations on physical activity, insomnia nights and in some cases death. The present work is aimed at preparing a formulation of Tramadol hydrochloride Lollipops8, 9 to provide prolonged retention time upto 30min. In oral cavity for relief of oral thrush as conventional form of lozenges retention time being around 7 mins.

The following pre formulation studies were investigated before commencement of the research work.

Tramadol hydrochloride hard lozenges are prepared in laboratory scale by heating and congealing technique 8,9, the composition as given in table no1. Required quantity of malt syrup and sucrose are transferred into a copper bowl, and then heated in a heating mantle at 150°C for 15 minutes. Then the temperature of the mixture was brought into 90°C,then polymers (HPMC, Na CMC, MC) Drug, flavor, calcium carbonate were added with stirring by using glass rod, and the solution was transferred into a lubricated mould. It was allowed to cool for solidification then lozenges were collected and packed in a aluminum foil.

The formulated lozenges were evaluated for the following parameters10, 11.

The thickness and diameter of the formulated lozenges were measured by using Vernier calipers.

The lozenge crushing strength, which is the force required to break the lozenge by compressionin the diametric direction was measured in triplicate using Pfizer tablet hardness tester.

Lozenges were weighed and powdered. The quantity of powder equivalent to 100 mg of was dissolved in buffer diluted to 100ml with buffer then the solution was filtered and suitably diluted. The drug content was estimated spectrometrically.

In vitro dissolution studies were carried out in 900 ml phosphate buffer PH 6.8 using USP dissolution testing apparatus (Model TDT 08L, Electro lab, Mumbai India) with a rotating stirrer speed at 100 rpm, and temperature of dissolution medium maintained at 37± 0.5°C.5ml of aliquots were withdrawn at regular intervals, filtered and same amount of fresh dissolution medium was replaced at the same temperature. The filtered solutions were analyzed by using (Shimadzu, Japan) UV- spectrophotometer at 271 nm. 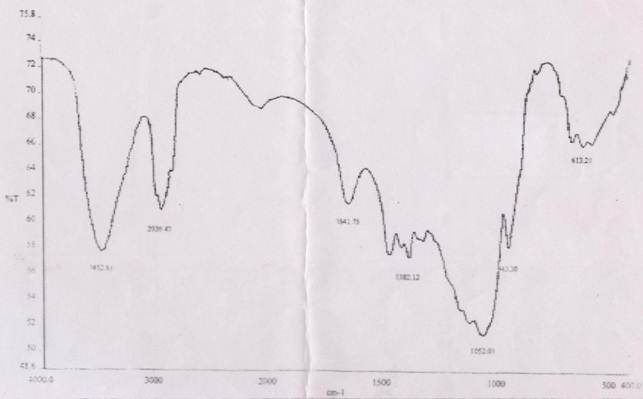 Among all the formulations formulated with malt syrup and HPMC 3000 cps F3 was given satisfactory results because of its viscosity and good binding property of malt syrup when compared with the other bases such as corn syrup and liquid glucose.

In the formulations mint flavour such as menthol are preferred in a slow dissolving lozenges, it provides a desirable soothing effect and by substantially micronizing or reducoing the particle size of antacid salts were incorporated to improve the organoleptic properties including mouth feel and taste of the product. It yields a product exhibiting a dense, non gritty and smooth texture for improved mouth feel.

In order to enhance the flow of saliva an acidulent is employed in the dry mouth lozenges. These are generally present in amount ranging from about 0.1 to 0.5% by weight of lozenges.

This type of vehicle allows the production of pleasent tasting product for the delivery of unpleasant tasting of drugs. The unique proportion of this vehicle are preserved in the final form while containg active ingredients which modifies the stimulatory taste receptors in the orl cavity to the extents of suppressing bitterness and other forms of unpleasant taste imported by actives.

Lozenges having wide advantages such as increase in bioavailability, reduce the gastric irritation, and to avoid the first pass metabolism. They can be prepared by molding (gelatin and / or fused sucrose or sorbitol base) or by compression of sugar- based tablets. Molded lozenges are sometimes referred to as troches. Molded lozenges have a softer texture because they contain a high percentage of sugar or a combination of a gelatin and sugar.

The maximum amount of drug released observed from the formulations formulated with sodium CMC, HPMC, MC at the end of 30 mins due to the chemical structure and gelling of swell able layer, while penetration of the saliva/media and also malt syrupwas responsible for the release of drug. This novel product which is recognized to be unique to its delivery system and made easy, conveint to take by the consumer for fast result when compared to the tablets/liquid preparations.

These lozenges are experiencing renewed popularity as a means of delivering different drug products, especially for patients who cannot swallow solid oral dosage forms and also used for it was designed for release of 30 mins for the treatment of pain in childreans.

From the present study it was suggested that corn syrup based tramadol hydrochloride wiil be ideal dosage forms for the treatment of pain to the paediatrics. By incorporation of synthetic polymers yields good results and release the drugs for a prolonged period of 30 mins.

Lozenges areintented to slowly dissolve in the mouth over a relatively long period of time. Eg; usually about 2-15 mins or more as needed. The taste bud and olfactory sences are able to detect even the slightest bittetness of unpleasant mouth feel and taste during such a long residence time in the mouth represents a substantial challenges it is desirable to provide a palatable dosage form of tramadol hydrochloride hard lozenges.