Abstract: Taking advantage of modern technology of the macro ionization of air in the air conditioning systems in order to promote the industrial air conditioning systems can be an appropriate way to resolve industrial centers and hospital's pollution, and also resolve monitoring of air in the urban tunnels. Breathing space around us is a mixture of particles and neutral and charged molecules, so by looking back at industrial achievements of tools and instruments of the air conditioners, electrical discharge method is practical and appropriate. In addition to refining of air pollutants, there is also the possibility of removing germs. Macro Air Ionization Technology (MAIT) in the industrial, hospital and urban tunnels is one of the offering methods of increasing healthy air as usual methods in environment. MAIT is a hi-tech equipment for improving air. One of these technologies is Negative Air Ionization Technology (NAIT). In the NAIT equipment air molecules after ionization change Negative Ion Concentrations in the room, tunnels and sheds. The negative ion molecules especially oxygen, will provide a healthy environment for plants growth process. Using NAIT, anions have the ability to conquest the microbes and microorganism. According to the performed research, utilizing the air ventilation modern technologies, have an efficient effect on the quantity and quality of important place as hospitals. For this reason, negative ion injections by MAIT into the air could be a part of research policies in developing and least developing countries for effective exploitation and correction of the Health and Safety Executive (HSE) conditions, as it was the part of basic research policies in last 40 years in developed countries. In this paper, we try to introduce hi-tech MAIT equipment based on corona discharge method.

Changing the scientific path of human societies into the current advanced industrial societies cause that modern technologies with intervention in the applied market, which is proportional to the needs of the industrial society, advance towards the former science and industry substructure. The expansion and movement of air conditioning industry is directed towards the same way. Therefore, today in health centers, industrial and constructional centers, new approaches are recommended in refining, monitoring, and air conditioning. As you may well-aware of, some of the former and current industrial equipment of different types of electrostatic air conditioning systems are produced and used with carbon and nano filters. Looking back at the effect of air ionization or electrical discharge of air, we can recommend a strategy in the optimal management in improvement of quality of the macro air conditioning systems in health care centers, industrial centers and urban tunnels. In the process of ionization of gases, by using a high voltage constant current source, accelerated electrons moves away from the electrodes, which during its path toward the opposite pole coronal discharge, it will change the air molecules with emission / absorption of energy into the charged positive / negative ions. Although a small number of electrons produced initially, but then the required electrons will be provided for the next ionization and avalanche ionization. Sequential repetition collisions of these particles makes the plasma environment, and its result and application in the field of modern technologies that is related to agriculture, animal husbandry, poultry farming, industry and the environment is negligible. So in the macro-air ionization, we face a factor in optimization of air conditioning cycle of crowded centers or refining environments from gaseous and non-gaseous (PM10 and PM2.5) pollutants. Determining the main target of ionization, network structures, size and order of the discharger electrodes which suit the required environmental conditions will change and will have a direct impact on changing the efficiency power and refinery output power.

With increasing population and increasing need for greater coverage by the respiratory air volume by air conditioning systems, the main challenge in this area is the design of air conditioning systems which with no doubt makes the role of modern technology in macro-air ionization in industrial air conditioning systems and underground tunnels more prominent [1]. In general because of breathing and the entry of pollutants into the environment, the harmful and positive ions density will increase. For this reason, it is necessary to design a system that can reduce the density of positive ions. So the positive ions should be neutralized and reduced in way that by increasing the negative ions density and by taking advantage of the modern technology of air ionization, this process becomes effective. Therefore, the scientific approach and mechanism of producing anion in the closed environments is considered a part of the discussion of new technologies in air-conditioning industry. In large-scale, industrial air conditioning systems that are based on modern technologies, and functional structure of producing anion and ionizing the environment is directly related to the corona discharge physical issues which will be possible through the high voltage switching source. Designed switching source is divided into two main sections: driver and high voltage. In the driver section, the required power through defined circuit by city electricity is ready to convert and transit to the high-voltage section. And, in order to manage the risks of high voltage of this device and for safety of the device, the required circuit is installed on the driver section. The end of the transition process of electrical current is the output driver signal with specific characteristics, which is used as the next section supplies, high-voltage power [1,2]. In the high voltage section, the voltage taken from the driver section by using special tools and special design together in series will turn into the desired voltage output. The result of this two-part is production of high-voltage electric along with low electrical current. Using previous technology in electrical discharge, particular equations will be used to present a suitable voltage-current of ionization and coefficient parameters of the coronal field is presented by the equation below if d≫r0:

-is potential difference of the beginning of the electrical discharge, -

is Critical potential gradient of air and is equal to

-is Parameter to determine the effect of electrode surface impurities, and its value for the smooth and monotonic electrode is equal one, which in the practical situation depending on the type of wire varies in the range of 0.85 to 0.98. And by the geometric parameters, distance and diameter of the electrodes is determined (The effect of geometric shape in different mechanisms of ionization with any polarity).

-is gas index parameter, which is dependent on the pressure and temperature between the electrodes and in the standard conditions is equal to

Therefore, the ionization of air with high voltage power source will design by different techniques such as power voltage with single-electrode discharge or a multi-electrode discharge (Figure 1) and it varies based on the desired location of the electrodes discharge parameters and shape of the electrodes. It should be noted that the use of a composite electrode networks with a voltage between 30 and 80 kV ( if required above) next to or under a high-powered fan air blower in the direction of central air conditioning ducts in industrial environments, hospitals and infrastructure to reduce pollution and enhance the health of breathing [3]. 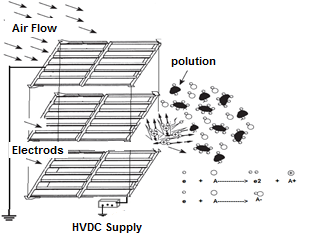 In corona discharge electrodes, by establishing a high voltage in the discharger at the cathode, strong electrostatic will be created and the strong coulomb force on the free electrons near the discharger surface causes electrons to be accelerated towards the opposite electrode, and move away from discharger electrodes and thereby participate in the process of air ionization. When the higher voltage is applied and electric field intensity increase, the speed of electrons movement becomes faster. In the high voltage, accelerated electrons collide with air molecules such as non-killers O2 and N2 which will be created in the electromagnetic field, have enough energies to separate the capacity layer electrons of molecules and convert it into cation. According to the following equation:

The electrons collide with air molecules, producing the sequential secondary electrons will continue and many electrons will be produced and the process is known as electron avalanche which particles flow towards the positive electrode. Because of being heavy, the produced cation moves slower towards the opposite electrode. So on the way to attract electrons in the space between the electrodes will be converted back into a neutral molecule. And, re-enter to the cycle of ionization [4,5]. Emission of electrons in a neutral space between the electrodes provides a situation for anion production. Negative charged region will be created in the path of oncoming emission through the pores and channels of air conditioner with direct effect, because of falling cation particles. On the sampling results, we review the impact of artificial ionization of the air in different phases of the haze dust of the particles PM10, and the nitrogen monoxide which its results is included in Tables (1 and 2): The variation in circumstances and the discharger of air pollutants is located about 60-65 kilometers away from the pollutant source [3,4]). Setting the artificial injection source in the effective potential and continuous output at least 12.10 ions in per cubic centimeter, makes dust and gas pollutants reduction by a factor of the coefficient effect of falling significant.

Table 1. All various of pollutant concentration [3,4].

Table 2. Concentration of industrial pollutants ( NO).

3. Macro Ionization Systems in the Hospitals

One of the known properties of air ionization systems is its bactericidal and anti-microbial effects. Although the definite mechanism of this effect is unknown, but several studies have shown that it exists. Antimicrobial effects of air ionization specially negative ionization are specified on some common types of bacteria, including Salmonella, Pseudomonas [6], Mycobacterium tuberculosis, Staphylococcus aurous [7] and Escherichia coli have been identified [8] antiviral effects [9] and antifungal sometimes observed and have been reported [10-13]. What makes this technology has been not widely used as an antimicrobial is because of its uncertainty of mechanism's effect and doubts about its more general effect and being Biocidal. This means that the mechanism which causes loss of germs will cause the death of living cells in general and have side effects for human. However, it seems not to be a problem to apply this method in areas where it is not likely having impact on human like hospital air conditioning exists and isolation rooms. Those who believe that negative ionization is harmless to humans, will not recommend the use of this technology in the input air where infections cause serious problems, such as ICU, burn and emergency departments. It is clear that the systems which need to reduce airborne infections will benefit most from this technology.

Security, health and health care in urban centers, enclosed public places, factories, hospitals, etc. is one of the fundamental social rights for a country's population. So, expansion of the underground public places metropolis such as subways, long tunnels in the city, underpasses pedestrians, increasing closed silos and many industrial centers as well as the increasing complexity of processes affecting the air pollution in large cities, will increase the need for healthy air conditioning systems in the cities and in the human community centers. The use and application of modern technologies in the increase of healthy and low-risk air conditioning equipment is necessary today. For this reason, using past achievements and integration of new technologies in air purification structure will improve the health of the public closed centers air and we can achieve the goals of protecting the health, safety and welfare of population effectively. Therefore, in this paper, we suggest the use of artificial ionization technology (aura electrical discharge) as a strategy to improve the situation in order to reduce unhealthy air pollutants, or in some cases having more breathing air for health care and industrial facilities.