Abstract: This paper presents the results of participation of Institut National des Sciences et Techniques Nucléaires-Madagascar (INSTN-Madagascar) in interlaboratory comparisons organized annually, since 2007, by Southern African Development Community WaterLab Association. The following text describes an overview of the utility of provided proficiency testing programs used as an external quality control with respect to proving consistency and reliability of water analysis at INSTN-Madagascar. Total reflection X-Ray Fluorescence spectrometry and Atomic Absorption Spectrometry are both used to measure the following trace metals: Al, Cr, Mn, Fe, Ni, Co, Cu, Zn, As, Cd, Pb. The analysis of minor and major ions such as Cl–, F–, NO3–, SO42–, PO43–, K+, Na+, Ca2+, Mg2+ are conducted by using Ion Chromatography. To illustrate, graphical distributions of z-scores calculated from the results of water measurements are presented. During the consecutive proficiency testing rounds, INSTN-Madagascar has succeeded to have more than 80% of the values within tolerance limits on 2007, 2008, 2010, 2011, 2012 and 2013. This paper shows some of the considerations for participating to proficiency testing exercises which could be used to obtain certain value from the schemes.

The present paper is focused on the results of interlaboratory comparisons organized annually, from 2007 to 2013, by Southern African Development Community (SADC) Waterlab in which INSTN-Madagascar takes part. For this purpose, the proficiency testing (PT) provider establishes performance scores by comparison of the laboratories results to the assigned value by transforming the qualitative results into quantifiable data based on predetermined criteria. Graphical plots of performance scores from round to round are presented.

The aim of this study is to assess and to demonstrate the performance of X-Ray Fluorescence and Environment (XRFE) Department in INSTN-Madagascar for some chemical elements in water through interlaboratory comparisons and to monitor the laboratory’s continuing performance.

With respect to meeting the objectives described above, the laboratory staff within XRFE department would assess and demonstrate the consistency and reliability of the data they are producing, gain confidence in their abilities, improve or at least maintain a level of competence comparable with the previous rounds, detect any difficulties they may meet with measurements and identify training needs, provide additional confidence to customers.

The chemistry PT round involved the distribution of six testing samples which were prepared as described in Table 1.

2.2. Distribution of Samples and Return Date for the Results

The samples were distributed to the local coordinators in each participating country provided that registration forms were submitted and payment had been received.

The participating laboratories have to submit their results onto a supplied result form to the PT scheme providers before or on the return date. Results received after the specified periods are not included in the final report.

An electronic evaluation report is then supplied to all participants in time. The information that is found in this document is confidential to the PT provider and to the participating laboratory of which a labcode is attributed.

Participants have been invited to conduct the analysis according to their routine procedure.

As for INSTN-Madagascar, testing samples were measured by using:

The sample preparation depends on the analytical methods used:

·     as for TXRF, 5 mg/L of yttrium used as internal standard are added to the sample solution as described in [5].

Six solutions are prepared by dilution from each category. The dilution factors are chosen as follows: 1, 5, 8, 10, 16, 20. Calibration curves are plotted on six points for each analyte in a range as defined in Table 1.

The accuracy of the instrumental methods and analytical procedures are checked by using the following Reference Materials (RMs) solutions:

Tables 2 and 3 show the measurement results of the above mentioned RMs at the time of 2013 round. The tables report the mean concentration and standard deviation values of 4 replicates.

Quality assessment statistics are presented graphically through control charts for ease of interpretation. The measurements of RMs are graphed on this chart as the recovery rate noted %R vs analytes. These charts can be used to present both bias and precision data.

The analytical recovery rate %R is expressed as follows [6]:

is the value reported by the laboratory and

is the assigned value.

The range of the acceptable criteria for recovery is laid down based on the concentration of the analyte. The target recovery ranges from 80% to 110% for analyte concentrations from 0.1 to 100 mg/L [7].

The calculation of %R, as defined in (1) for each analyte allows to graph the charts in Fig. 1 and Fig. 2. 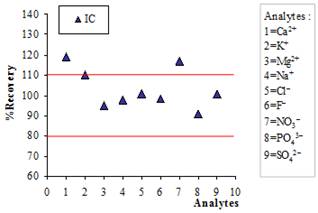 Fig. 1. Distribution of recovery rate for minor and major ions in the analyzed RMs.

Now, figures 1 and 2 show that recoveries within 83% to 119% are obtained for all analytes as far as the three analytical methods are concerned. Ca2+ and NO3– are slightly overestimated with respectively recovery values 119% and 117%. The comparison of TXRF results with those obtained by AAS measurements are in good agreement for all analytes.

According to the above mentioned criteria, the agreement between the assigned values and the laboratory values is generally good. 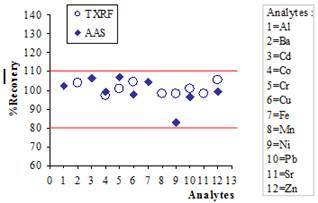 Fig. 2. Distribution of recovery rate for trace metals in the analyzed RMs.

In case the recovery differs significantly from 100%, the PT result values are corrected by calculation for recovery according to the following formula:

is the value reported by the individual laboratory,

is the value measured by the individual laboratory and %R is the recovery.

The evaluation report within the SADC PT provider for water testing laboratories was supplied with a strict confidentiality. The results are grouped versus analytes/laboratories and compared according to z-score values.

is the value reported by the individual laboratory,

is the assigned value and

is the standard deviation for proficiency assessment.

According to Ph. Quevauviller, E. A. Maier [9], the following judgment is made:

Results leading to |z| ≤ 2 are satisfactory

all other results |z| > 3 are unsatisfactory

A laboratory is considered successful in analysing an analyte if two or more z-scores for the analyte are satisfactory.

Table 4 illustrates an example of the performance evaluation result carried out by SADC Waterlab.

Taking into account the evaluation of consecutive PT rounds results, a graphical plot of performance scores by using the z-scores from round to round is drawn up, in order to identify potential problems related to imprecision and human errors.

During the consecutive PT rounds, measurements were conducted by using TXRF and AAS techniques with minimum sample preparation.

2007 PT round: figure 3.1.a shows that 7 out of 24 results were "out of control". Among the 8 tested elements, the results which are got from Fe in the three testing samples are found to be out of control.

Regarding the results from the 2008 to 2013 PT rounds, the measurements of water samples look good. The TXRF and AAS analytical methods perform well for the analysis of water samples as for Fe, Mn, Al, Pb, Cu, Zn, Cr, Ni, As, Cd and Co.

During the consecutives PT rounds, measurements were conducted by using IC technique with minimum sample preparation.

2009 PT round: figure 3.3.b shows that 15 out of 27 results were outliers. The results of anions in samples #1 and #2 are among these outliers with an overestimation.

2011 PT round: the situation was mismanaged during this round as far as ions measurements are concerned; 12 out of 27 results are "out of control" (figure 3.5.b). Even so, the IC technique determines positively biased values for anion parameters.

It can be concluded that the performance of the XRF laboratory in INSTN-Madagascar is better for the quantification of trace metals in water samples comparing to ion parameters.

After evaluation of the cause of the nonconforming ion chromatography results, the following precautions are taken:

·     avoid to change the eluents during a series of measurements;

·     check from time to time if there is no liquid leak inside the analytical apparatus. 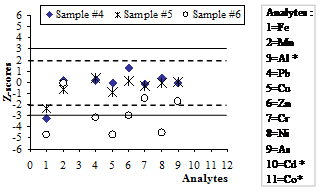 ·     The AAS equipment was only installed on November 2008; while, on the other hand, TXRF module could not ensure the detection of Al and Cd. 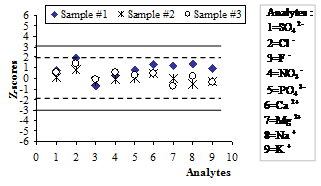 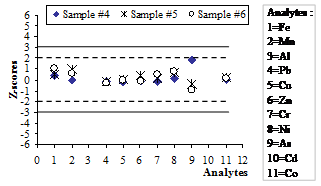 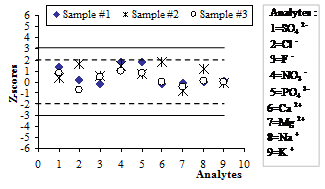 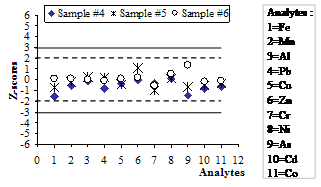 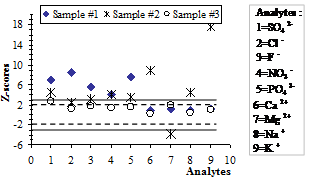 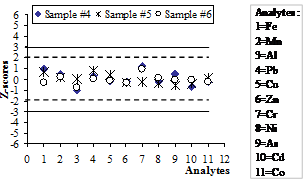 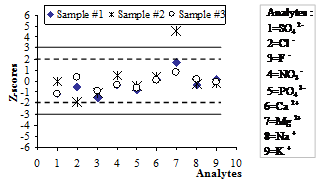 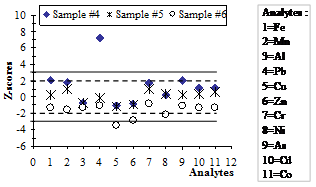 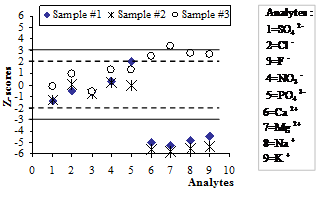 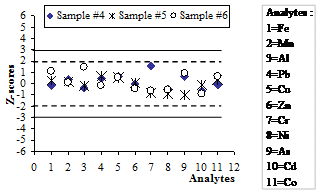 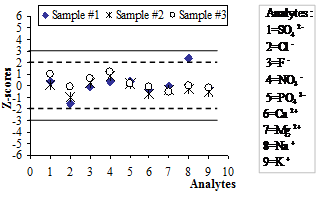 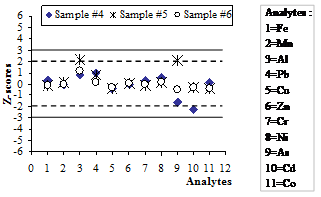 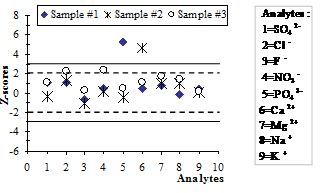 To summarize, the evaluation report is displayed graphically in figure 4. 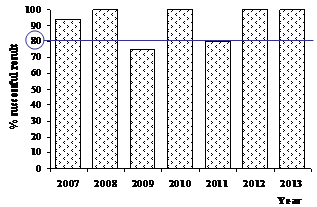 Fig. 4. Percentage of successfully analysed values during the period 2007-2013. 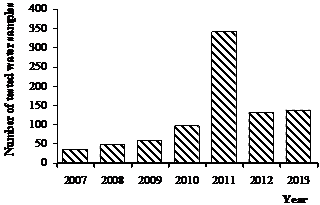 Owing to the assistance of the International Atomic Energy Agency through analytical equipments and trainings on the one hand and to the efforts of local testing laboratory on the other hand, the clients’ needs are met due to the increase of the number of analytes to be measured and their confidence on the reliability of analytical results. Figure 5 shows the increase of the number of water samples that were tested at INSTN-Madagascar during the period 2007 to 2011.

Indeed, a decrease of the demand is observed in 2012. Effectively, due to the expansion of mining industries in Madagascar, the most of them were on phase of exploration in 2011. On one hand, they make investigations to find waters for their needs and on other hand, to check the baseline (in term of water quality) of the site where they are going to be installed. The next two years, the clients’ requests go back to normal.

The need for ongoing confidence in laboratory performance is not only essential for INSTN-Madagascar and its customers but also for other interested parties, such as regulators and laboratory accreditation bodies.

In order to accomplish laboratory accreditation, especially for INSTN-Madagascar, participation in interlaboratory comparison is a required approach to demonstrate the validity of measurement results to customers.

The proficiency testing program by interlaboratory comparison is one of the useful tool in meeting the requirements of ISO/IEC 17025 (clause 5.9) [10] in the area of quality assurance of laboratory results.

It is not about ‘passing’ or ‘failing’ a test but it is about participating and learning from the results to avoid that errors recur.

In parallel, the study determines the concentrations of major and minor ions and metals in water samples. The results show that the three analytical methods used in the present PT scheme namely IC, AAS and TXRF are reliable for the measurements of these chemicals.

Extensive studies on the other environmental samples such as drinking water, aerosols, soils, ... have been developed at INSTN-Madagascar [11], [12], [13] and this latter should continue the programme in order to carry out confidently the Environmental Quality Assessment.

The interlaboratory comparison described in this report has been made possible thanks to the work carried out by SADC WaterLab Association.

The authors are grateful to the International Atomic Energy Agency, Vienna Austria, within the frame of RAF/0/027 and MAG/8/007 projects through expert service, supplying of equipment and training of staff.