Abstract: 2,4-Dichlorophenol (2,4-DCP) and 2,6-dichlorophenol (2,6-DCP) are two isomers of dichlorophenols, have been used as preservative agents for wood, paints, vegetable fibers and as intermediates in the production of pharmaceuticals and dyes. The aim of the study was to evaluate the impact of biofield energy treatment on the isotopic abundance ratios of 2H/1H or 13C/12C, and 18O/16O or 37Cl/35Cl, in dichlorophenol isomers using gas chromatography-mass spectrometry (GC-MS). The 2,4-DCP and 2,6-DCP samples were divided into two parts: control and treated. The control sample remained as untreated, while the treated sample was further divided into four groups as T1, T2, T3, and T4. The treated group was subjected to Mr. Trivedi’s biofield energy treatment. The GC-MS spectra of 2,4-DCP and 2,6-DCP showed three to six m/z peaks at 162, 126, 98, 73, 63, 37 etc. due to the molecular ion peak and fragmented peaks. The isotopic abundance ratios (percentage) in both the isomers were increased significantly after biofield treatment as compared to the control. The isotopic abundance ratio of (PM+1)/PM and (PM+2)/PM after biofield energy treatment were increased by 54.38% and 40.57% in 2,4-DCP and 126.11% and 18.65% in 2,6-DCP, respectively which may affect the bond energy, reactivity and finally stability to the product.

Dichlorophenols in small amounts used directly as pesticides or converted into pesticides by chemical means. 2,4-DCP and 2,6-DCP are two isomers of dichlorophenols, and they have been used as preservative agents for wood [1,2], paints [3], vegetable fibers, and as disinfectants. In addition, they are used as herbicides, fungicides insecticides and as intermediates in the production of pharmaceuticals and dyes [4]. Chlorophenols are obtained by direct chlorination of phenol using chlorine gas [5]. In the technical product, there are impurities of other chlorophenol isomers or chlorophenols with more or less chlorine [6]. Environmental contamination is mainly occurred during manufacturing, storage, transportation and application of chlorophenols. In recent years, public health authorities are concerned about the air borne contaminations and so germicidal paints has been proposed in reducing atmospheric microbial pollutions [7]. Keeping in mind of the applicability in large quantities the stability of these isomers is most desired quality that determines the life of the finished product. Hence, it is important to find out an alternate approach that could enhance the chemical stability of the compound by altering the structural properties. Recently, biofield energy treatment is reported to alter the physicochemical properties and even isotopic ratios of various elements significantly in a molecule of various living and non-living substances [8-10]. The isotopic abundance ratios of 2H/1H, or 13C/12C, and 37Cl/35Cl or 18O/16O, could be locally altered by kinetically driven chemical reactions. There is an alternative and well-known approach; Mr. Trivedi’s biofield energy treatment, also known as The Trivedi Effect®, that can be applied on dichlorophenol isomers to undergo the isotopic changes.

The distribution of contaminant sources of any molecule on a native or global scale can be understood by determining the isotopic abundance ratio [11]. Any kinetic process that leads to the local depletion or enhancement of isotopes in organic molecules can be successfully determined using gas chromatography-mass spectrometry (GC-MS) [12]. These deviations from perfect chemical equivalence are termed as isotope effects. The isotopic abundance ratio is commonly reported in terms of atom percent and determined by high resolution mass spectrometry (HRMS spectrometry) [13]. For example, 13C

Moreover, the rate of chemical reaction may vary with the mass of the nucleus with different isotopic substitutions, which slightly affect the partitioning of energy within the molecules [14]. Study the impact of biofield energy treatment on isotopic abundance ratio of elements in a molecule is new to its kind and our group have successfully designed and establish the fact.

The National Center for Complementary and Alternative Medicine (NCCAM) has recommended the use of energy therapy as a part of Complementary and alternative medical therapies (CAM) in the healthcare sector [15]. CAM includes numerous energy-healing therapies, in which the biofield therapy is a form of putative energy therapy that is being widely used worldwide to improve the overall health of human beings. Humans have the ability to harness energy from the environment/universe that can be transmitted to any objects around. The ability of Mr. Trivedi as a biofield energy practitioner was well studied in recent years. The physicochemical properties of various molecules and crystals were altered by utilizing Mr. Trivedi’s biofield energy treatment [16-18]. Based on the previous results achieved by The Trivedi Effect in various fields, biofield energy treated 2,4-DCP and 2,6-DCP were taken for mass spectroscopy studies to evaluate the isotopic abundance ratio of 2H/1H, or 13C/12C [(PM+1)/PM] and 37Cl/35Cl or 18O/16O [(PM+2)/PM], [where PM is the primary molecule and (PM+1) and (PM+2) are isotopic molecules].

Each of the 2,4-DCP and 2,6-DCP samples was divided into two parts, one part remained untreated and called as control and the other part was subjected to Mr. Trivedi’s biofield energy treatment under standard laboratory conditions, that considered as treated sample. The treated sample was further divided into four groups (i.e. T1, T2, T3, and T4) for GCMS analysis. There are no differences among the treated samples T1, T2, T3, and T4, except time. The isotopic abundance ratio of [(PM+1)/PM] and [(PM+2)/PM] in control and treated samples were characterized using gas chromatography-mass spectrometry (GC-MS).

GC-MS analysis was done on Perkin Elmer/auto system XL with Turbo mass, USA. The GC/MS was performed in a silica capillary column. It was equipped with a quadrupole detector with pre-filter, one of the fastest, widest mass ranges available for any GC/MS. The mass spectrometer was operated in an electron ionization (EI) positive/negative, and chemical ionization mode at the electron ionization energy of 70 eV. Mass range: 20-620 Daltons (amu), stability: ± 0.1 m/z mass accuracy over 48 hours. The identification of analytes were done by retention time and by a comparison of the mass spectra of identified substances with references.

The isotopic abundance ratio (PM+1)/PM and (PM+2)/PM was expressed by its deviation in treated samples as compared to the control. The percentage change in isotopic ratio was calculated from the following formula:

Where, RTreated and RControl are the ratios of intensity at (PM+1) or (PM+2) to PM in mass spectra of treated and control samples, respectively.

The mass spectrum obtained for the control sample of 2,4-DCP in the positive-ion mode is illustrated in Fig. 1. It gives molecular ion peak at m/z 162 with two major fragmented peaks in lower m/z region that are well matched with the literature report [19]. The peaks at m/z 64 and 98 were due to the fragmentation of 2,4-DCP to C5H4+and C6H10O+ions, respectively. The GC-MS spectra of treated samples were slightly different from the fragmentation pattern of the control sample. The GC-MS spectra of treated (T1, T2, T3, and T4) samples are presented in Fig. 2. It showed three major peaks including molecular ion peak in T1 sample of 2,4-DCP with the base peak at m/z 63 (C5H3+). In both the cases (control and treated) mass spectra showed the loss of two Cl‑ ions in the fragmentation process, followed by the ring opening reaction, corresponded to the following ions, respectively: C6H10O+, C5H3+, m/z 98 and 63. Most unlikely, there were four major peaks observed in T2, with an additional peak at m/z 73 (C4H9O+). However, similar to the control sample, three major peaks at m/z 162, 98 and 63, were observed in T3 and T4. 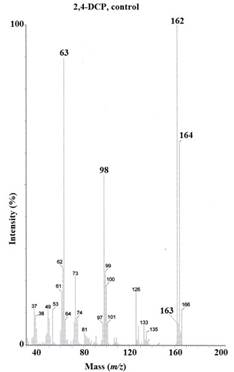 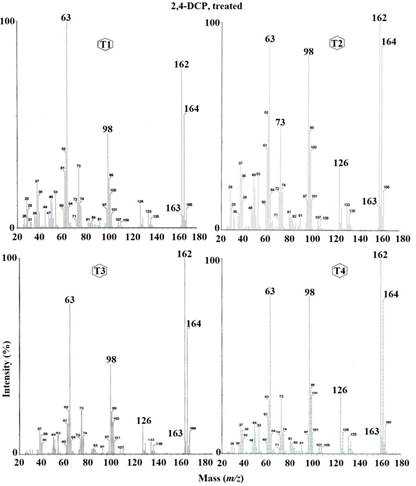 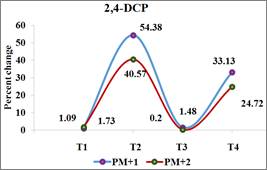 Figure 3. Percent change in the isotopic abundance of (PM+1)/PM and (PM+2)/PM in 2,4-dichlorophenol after biofield energy treatment.

The mass spectrum of the control sample of 2,6-DCP is presented in Figure 4 and well matched with the literature report [21]. The molecular ion peak was observed at m/z 162 with three other fragmented peaks in mass spectra. Unlike the control sample, there are 3-6 major m/z peaks were observed in the mass spectra of treated 2,6-DCP (Figure 5) at m/z 162, 126, 98, 73, 63, 37 etc. The calculated relative intensity ratio and percentage abundance ratios in 2,6-DCP are presented in Table 2. In both the isomers 2,4-DCP and 2,6-DCP, molecular ion peak was observed as a base peak except in the T1. However, they exhibited slight different fragmentation pattern due to the structural and reactivity differences in them. The isotopic abundance ratio of (PM+1)/PM and (PM+2)/PM in control and treated samples of 2,6-DCP are presented in Fig. 6. The isotopic abundance ratio of (PM+1)/PM and (PM+2)/PM of treated 2,6-DCP was increased upto 126.11% and 18.65% as compared to the respective control. 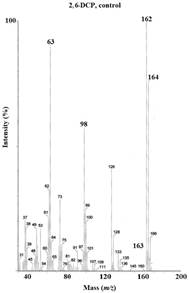 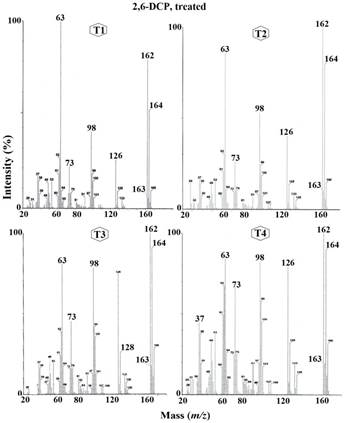 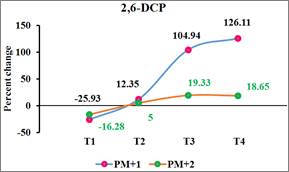 Figure 6. Percent change in the isotopic abundance of (PM+1)/PM of 2,6-dichlorophenole after biofield energy treatment as compared to the control.

The decreased reactivity of the dichlorophenol isomers may increase the stability of the chlorophenol based industrial products, by reducing the degradation kinetics in the finished products after production. Furthermore, the molecules used in paint industry should have high chemical and photo stability for sustainability of the product. Photo stability is a great concern in order to use them successfully in outdoor conditions without degradation. After biofield treatment, the chemical, as well as photo stability might be enhanced due to the presence of higher isotopes, that enable them to expose the materials to light and robust weather conditions for longer period.