Acacia Nubica is the one of the species in series 4 (Gummiferae) of Bentham’s classification of the genus [1].

The gum is a polysaccharide contains D-galactose, L- arabinose, and D-glucuronic acid, which is present in two aldobiouronic acids, 6-O-(β-D-glucopyranosyluronic acid)- D-galactose and 4-O-(α-D-glucopyranosyluronic acid-D- galactose. Autohydrolysis gave 3-O-β-L-arabinofuranosyl-L- arabinose, 3-O-β-L-arabinopyranosyl-L-arabinose, β-(1 → 3)-linked-L-arabinose trisaccharides. Partial hydrolysis with acid gave 3-O-β-D-galactopyranosyl-D-galactose and 6-O-β- D-galactopyranosyl-D-galactose. An examination of the O- O-methyl derivative of degraded of gum gave 2,3,4,6-tetra-, 2,3,4-, 2,3,6-, and 2,4,6-tri-, and 2,4-di-O-methyl-D- galactose; 2,3,4-tri-O-methyl-L-arabinose; and 2,3,4-tri-O- methyl-D-glucuronic acid. The structural evidence suggests that A. nubica gum molecules possess highly branched D-galactan frameworks, to which are attached D-glucuronic acid residues and L-arabinose-containing side-chains, some of which are at least six units long. The gum contains the largest proportion of L-arabinose in any of the Acacia gum exudates studied to date [2].

Several food hydrocolloids exhibit interfacial properties, leading to emulsifying and emulsion-stabilizing applications. Hydrocolloids stabilize these emulsions through viscosity effects, steric hindrance and electrostatic interactions. Hydrocolloids suitable for this purpose must have high solubility in cold water, low viscosity in solution, high emulsifying capacity and no thickening and/ or gelling effects with aging. One of these is gum Arabic [3,4]. The emulsifying activity of these hydrocolloids has been attributed to the proteinaceous moietybecause, the hydrocolloids themselves are predominantly hydrophilic. The emulsion stabilization, on the other hand, is attributed predominantly to the carbohydrate portion, contributing to viscosity, steric, and electrostatic effects [5]. The small amount of protein which is covalently linked with highly branched polysaccharide structures is the arabinogalactan protein (AGP) fraction that is critical in establishing the emulsifying properties of Acacia gum [6,7]. The AGP-rich fraction of gum Arabic is adsorbed on the oil–water interface; it has been shown to be responsible for the emulsifying properties of gum Arabic [8,9].

The gum Arabic forms a protective layer, viscoelastic film around the oil droplets that prevents the droplets from aggregating (flocculating and/or coalescing). It also reduces the oil–water interfacial tension, thereby facilitating the disruption of emulsion droplets during homogenization [10]. This film results in steric repulsive forces that stabilize the emulsion, and this action is sensitive to various parameters such as temperature, pH, and ionic strength. It has been suggested that most other gums, in contrast, act as long-term stabilizers of concentrated emulsions by lowering the mobility of the emulsified droplets, thereby hindering their coalescence [11]. Emulsion stabilization by hindering mobility is effective in concentrated solutions but is lost upon high dilution, gum Arabic with its ability to coat the surface of oil droplets, is an effective stabilizer of emulsions in dilute solutions as well as in concentrated solutions [12]. As a matter of fact, only the AGP molecules adsorb at the surface in an emulsion, whereas the other components have poor affinity for the interface and remain in aqueous phase [8,13,14]. The emulsification properties of gum Arabic are utilized in various liquid flavor emulsions. Many citrus oils and other beverage flavor emulsions utilize the emulsification properties of the gum. When used as a flavor fixative, the superior film forming ability of gum Arabic makes it ideal for protecting the flavor from oxidation, evaporation and absorption of moisture from the air.

is the measured rotation in degrees, c, is the concentration of the solution in g/100 cm3 and I is the light path length in decimeters.

A glass column was packed with an Amberlite Resin IR (120H+). HCl was passed through the column until the resin was thoroughly washed with the acid. Then this was followed by distilled water until the column was chloride free. 50 ml of 3.0% gum solution was passed through the column, followed by the distilled water until a volume of 250 ml of the eluent and washing were collected. This was titrated against 0.1N NaOH. The apparent equivalent weight of the acid was calculated by:

And the percentage of acid anhydride is calculated by:

where: A.E.W is the apparent equivalent weight and 194 is the molecular weight of uronic acid.

The GPC system comprising a high precision HPLC pump (Water, USA), an injector (Rheodyne 7125, Rheodyne, UK), a GPC column (Sepharose 6, Pharmacia, Sweden) attached to a multi-angle laser light scattering system (DAWN DSP, Wyatt Technology USA), and UV detector (Pye Unicam, UK), and the software (Astra 4.5 for windows, Wyatt Technology, USA) was arranged. The system is switched on for two hour to equilibrate before carrying out any analysis. Gum samples were accurately weight 0.02g in small vial NaCl to which 5ml of 0.2 M were then added. The vials were stoppered and kept on a roller shaker for two hours. 100-microlitre solution was injected into the GPC system via 0.45µm filter (Water Millipore) into the injector fitted with 100-microlitre loop. Elution buffer, 0.2 M NaCl, was passed at flow rate of 0.5 cm3/min at ambient temperature. The gum was fractionated while passing through the Sepharose 6 GPC column and fractions were detected via MALLS, RI and UV detectors responses were collected. The data was collected and analysed by Astra software V 4.5 (Wyatt Technology. USA). In the following text and tables the expressions Mw and Mn are used for the weight and number average molecular weights and Mw/Mn for the polydispersity index (Mw/Mn) and Rg for the root mean square radius.

Distilled water was added to 12.8 g of the test samples (based on the solid content) to become total 40 g in a 100 ml glass bottle and the sample was mixed using a roller mixer until completely dissolved. When the kibbled sample was used, the solution which has insoluble matter was centrifuged at 2.500 rpm for 5 minutes. Then, the supernatant of the solution was filtered using 100 µm mesh. 25 g of 32% (W/W) gum solution was mixed with 0.52 ml of 10% (W/V) sodium benzoate solution, 0.48 ml of 10% (W/V) citric acid solution, and distilled water was added to become total 32.0 g. then, 8.0 g MCT oil was added to the gum solution (total 40 g). The mixed solution was vortexed vigorously for 1 minute. Emulsion was prepared using a polytron PT-2100 homogenizer at 26.000 rpm for 3 minutes (PTDA used as 2112/2EC. 9 mm tip diameter, tip speed 10.4 m/s) was used as dispersing tool. The emulsion was then homogenized using a Nanomizer (NM2-L100-D07, Collision type S generator, Yoshida KiKai Co. Ltd.) time at 75 MPa.

The turbidity of emulsions was obtained by Turbidity meter model HANNA TURBIDITY METER LP 2000. The instrument was calibrated with de-ionized water to adjust zero.

Table 2. shows that calcium, potassium, magnesium, sodium, iron, and copper are the most abundant elements in all gum samples. The results show that the major elements in Acacia Nubica samples are, in the increasing order, Ca, K, Mg, Na, Mn, Fe, Pb and Cu

A typical elution profile for Acacia Nubica monitored using light scattering, refractive index, and UV detection was similar to that obtained from Acacia Senegal are shown in Figure 1 and is summarized as follows: The light scattering response reflects the mass and concentration and shows two distinctive peaks. The first peak has a high response because it corresponds to the high molecular weight material (AGP) content. The second peak is broader with lower response and it accounts for the rest of the gum (AG + GP; 90%). The refractive index response also shows two peaks, but the response is opposite to that in light scattering. This is because it is a concentration detector, and because the AGP is only 10% of the total gum, its peak is smaller than that of the AG and GP, which constitute ~ 90% of the total mass. The UV response shows three peaks. The first peak is for the AGP, which has the protein core and the carbohydrate attached to it. The second peak appears as a shoulder immediately after the AGP and corresponds to the AG. Finally, the third peak is eluted before the total volume and corresponds to the GP. The GP peak, which constitutes ~ 1% of the total gum, is not detected on the light scattering (mass detector) because it has low molecular weight. Also, it cannot be seen on the refractive index (concentration detector) 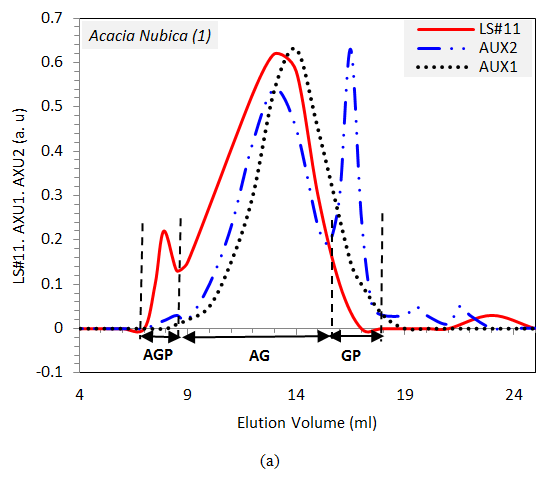 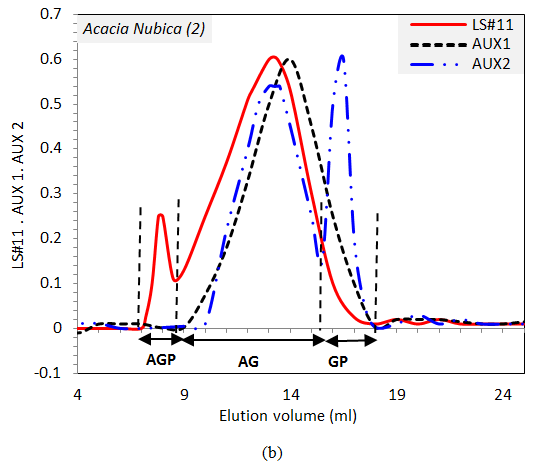 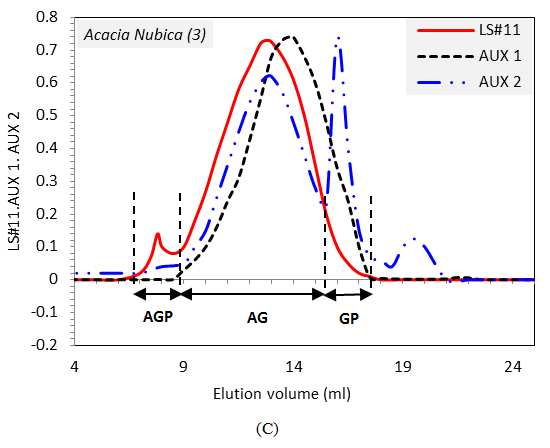 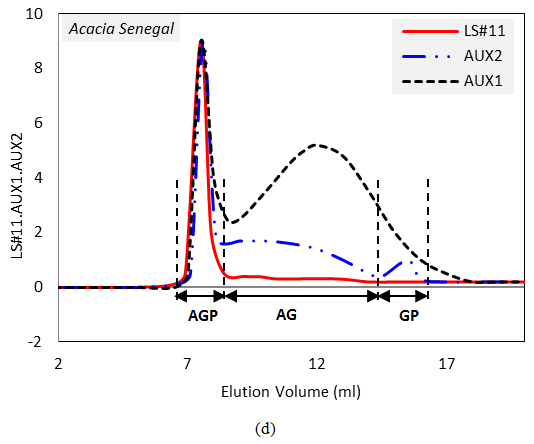 The overlay of elution chromatograms of Acacia Nubica samples measured by light scattering detector Figure 2 illustrate decreasing in molecular weight of all Acacia Nubica samples compared with Acacia Senegal sample. However, the elution chromatograms measured by refractive index Figure 3 it is evident that there is the increasing of AGP component in the Acacia Nubica compared with Acacia Senegal, which decomposed to give an increase amount of AG component. 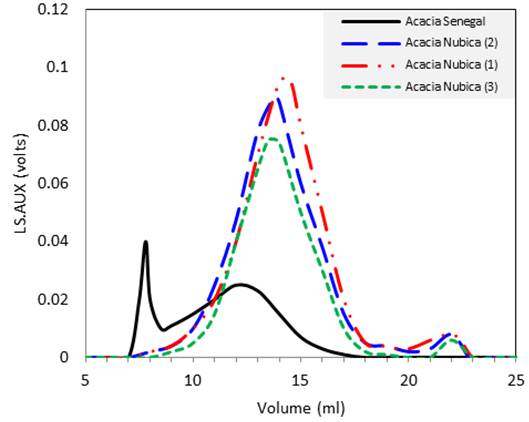 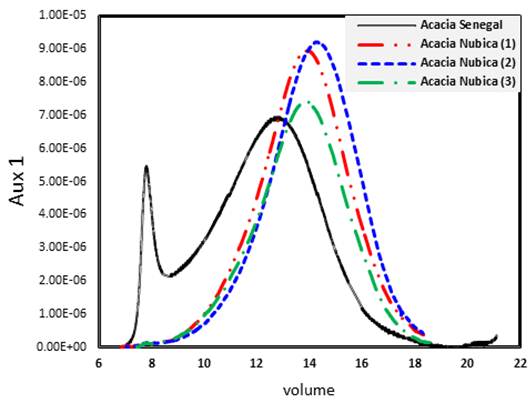 Figure 3. The elution profiles monitored by RI at 214 nm for Acacia gum samples. 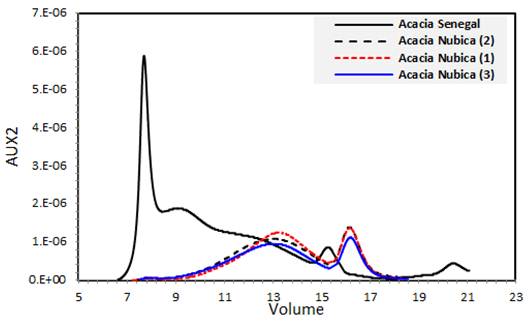 Figure 4. The elution profiles monitored by UV at 214 nm for Acacia gum samples. 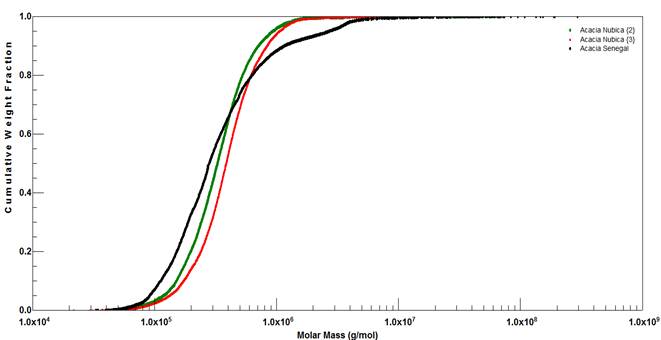 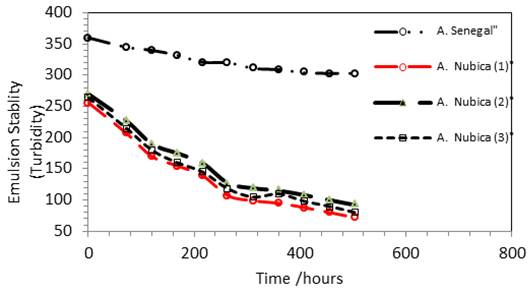 Figure 6. Turbidity of the Acacia. Nubica and Acacia Senegal emulsions. Data are reported in mean from 3 replications.

The turbidity of the prepared emulsions as a function time is depicted in Figure 6. Usually, the emulsion stability is influenced by the magnitude of interaction and forces between emulsion droplets, which are related to creaming properties of all emulsions [11]. This is because creaming involves the movement of the droplet to upward whereas turbidity also involves the movement of the particle to upward. The higher creaming rate, coalescence rate and the probability of flocculation can be caused by the larger mean droplet size. On the contrary, greater emulsion stability with respect to coalescence can be produced by the smaller droplets.

Table 4 and Figure 7 show that the d4.3 of initial and accelerated of emulsions prepared from Acacia Nubica and Acacia Senegal.

For emulsion droplet size, the diameter explaining surface area (d3,2) are important when the study of a catalyst or a mount of surfactants on the droplets surface are of interest whereas the diameter of the mass or volume (d4,3) of the dispersed oil droplets are referred when total amount of oil in the dispersed phase is significant (i.e. 50% in the present case). According to McClemants et al. d4,3 is more sensitive to the existence of large particles in an emulsion compared to d3,2. Thus, d4,3 more sensitive to the phenomena of flocculation [12]. This might explain the higher value of d4,3compared to d3,2 since all emulsions showed large droplets. All emulsions exhibited a typical bimodal droplet size distribution with a pronounced shoulder reflecting a very small group of the droplet with the largest diameter (Figure 7). On the other hand, it was found that there were no significant differences among the samples for d4,3.

All Acacia Nubica samples emulsion for d3.2 gave large droplet size compared to Acacia Senegal emulsion (Figure 8 and 9). On the other hand, Acacia Nubica (3) show a high degree of polydispersity (span%) than other samples, indicating bad uniformity of droplet mean diameter and decrease adsorption of protein on the oil droplet surface and minimum protein/surface contact then increase the droplet size. This might be promoted by a low viscosity of the continuous phase, and less time for the protein to be adsorbed and less stabilizing status emulsion. 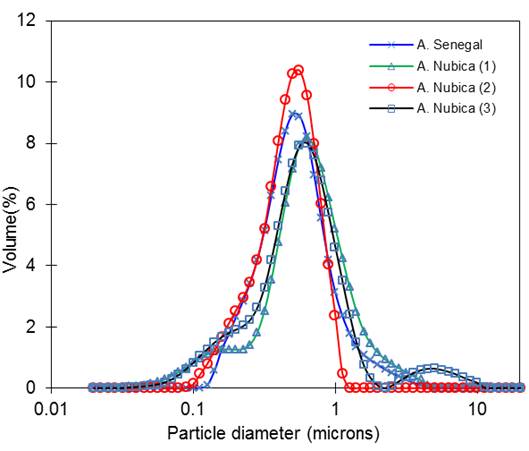 Normally, the large droplets size will result in lower turbidity value whereas the smaller droplets size will result in high turbidity value. This is because emulsions with large droplets have more tendencies to migrate quickly to the middle and upper part of the cuvette which resulted in lower turbidity reading. The turbidity was observed to be lower in the emulsion of Acacia Nubica with large droplet size than the emulsion of Acacia Senegal. In a different way, small droplets could from large flocs whereby the flocs also tend to move upwards which is true for concentrated emulsion [15]. This could explain a lower turbidity value of Acacia Senegal emulsion with smaller droplet size and larger turbidity of Acacia Nubica emulsion with large droplets size. The emulsion stability index (ESI) is an important measurement to evaluate the potential for creaming in an emulsion. ESI values close to one indicates excellent emulsion stability while higher value indicates less stability. Protein content had a significant effect on ESI, as the ESI increase as the protein content increase and decrease as the protein content decreased. 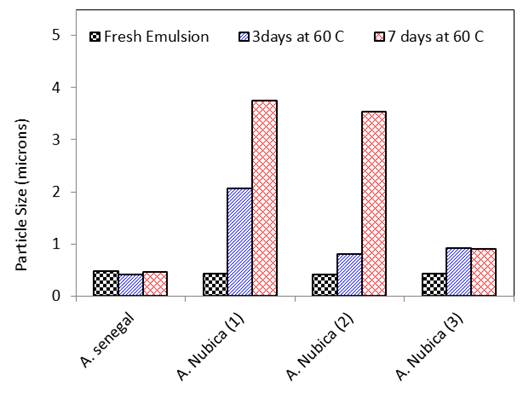 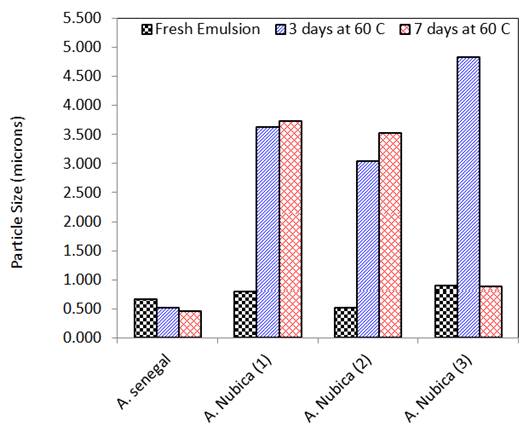