Abstract: In order to study the changes of Shanghai Composite Stock Price Index (SCSPI) and predict the trend of stock market fluctuations, this paper constructed a time-series analysis．A non-stationary trend is found, and an ARIMA model is found to sufficiently model the data. A short trend of Shanghai composite stock price index is then predicted using the established model.

There are more than 3000 stocks in China stock market, and Shanghai Composite Stock Price Index (SCSPI) is a good representatives for all the stocks in China market. SCSPI is the first release of the stock index in China, and it is calculated based on all the stocks in Shanghai stock market. In the financial industry of China, the prediction of Shanghai composite stock price index is always a high-profile topic, which is useful in avoiding the risk of investment interests, and also in reflecting the changes of structure, activities and trends of China macro-economic. If investors can accurately predict the stock market trend, the invest risk can be reduced and the benefits can be maximized. Thus, scientific and reasonable forecast of stock index really vital to financial practices.

In statistics and econometrics, and in particular in time series analysis, an autoregressive integrated moving average (ARIMA) model is a generalization of an autoregressive moving average (ARMA) model. These models are fitted to time series data either to better understand the data or to predict future points in the series (forecasting). They are applied in some cases where data show evidence of non-stationarity, where an initial differencing step (corresponding to the "integrated" part of the model) can be applied to reduce the non-stationarity. Non-seasonal ARIMA models are generally denoted ARIMA (p, d, q) where parameters p, d, and q are non-negative integers, p is the order of the Autoregressive model, d is the degree of differencing, and q is the order of the Moving-average model. Seasonal ARIMA models are usually denoted ARIMA (p, d, q) (P, D,Q) , where m refers to the number of periods in each season, and the uppercase P, D, Q refer to the autoregressive, differencing, and moving average terms for the seasonal part of the ARIMA model. ARIMA models form an important part of the Box-Jenkins approach to time-series modelling.

A timing diagram is firstly plot using all the SCSPI data of 2014 based on closing stocks price. As shown in Figure 1, a clear increasing trend can be found from the diagram, which is corresponding the increasing China economics. The SCSPI changes from around 2100 points in the beginning to around 3250 points in the end of year 2014. The increasing trend breaks the hypotheses of weaker stationary. In many application cases, the weaker stationary is used instead of strongly stationary.

A weaker form of stationarity commonly employed in time series is known as second-order stationarity, which only require that 1st moment and auto-covariance do not vary with respect to time. So, for a continuous-time random process  x(t),  it has the following properties: the mean function E{x(t)} must be constant and the covariance function depends only on the difference between t1 and t2 and only needs to be indexed by one variable rather than two variables. 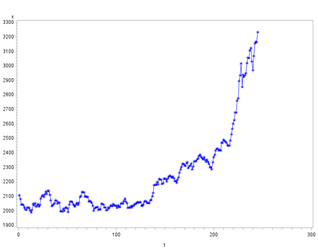 Figure 1. The timing diagram plot of SCSPI data of 2014 based on closing stocks price. 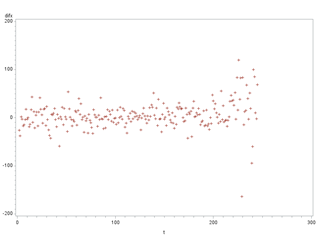 Figure 2. The timing diagram plot of the First order differencing data on SCSPI data of 2014 based on closing stocks price. 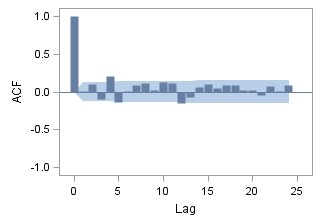 Figure 3. The Autocorrelogram on the first order differencing data of original SCSPI data.

The basic idea of ARIMA model is to view the data sequence as formed by a Stochastic Process on time. Once the model has been identified, the model can be used to predict the future value from the past and present value of the time series. Modern statistical methods and econometric models have been able to help companies predict the future in a certain way.

Based on the results from section 2.2, an ARIMA model can be fitted to the original SCSPI data of 2014, and the parameters in ARIMA (p, 1, q) need to be determined then. From the Figure 3 of the Autocorrelogram, it is safe to determine that q is no more than 3, while as shown in Figure 4, the partial autocorrelation is also no more than 3. This means that it is enough to choose the model in the set of 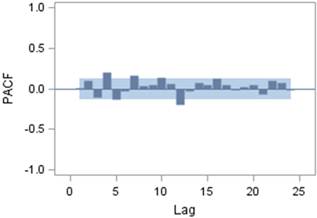 The final model is

which can also be written as

Using the built model, five steps prediction can be done and compared with the actual value, which are listed in Table 3 and Figure 5. As shown in Table 3, the forecast value is around 3255 and with a relative small standard error, which is also reflected in the 95% confidence limits.

Table 3. The next 5 steps prediction of actual SCSPI value based on the final model. The predicted value are shown with the standard error and 95% confidence limits. 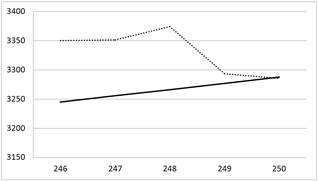 Figure 5. The dash line is draw by the actual SCSPI value, while the solid line is from the predicted values.

Although the predicted values is a little different from actual value, the increasing trend is agreed in the 3 steps, which is enough for financial practice. The fluctuation of SCSPI is can be caused by many factors, such as China financial police, international financial events and polices. The fluctuations of stocks are non-rational, and it is influenced by many factors. No model can include all these factors. The most frequent reason which makes the stock suddenly appeared on big sell-off is the country and the global financial policy and current affairs. For example, in January 19, 2015, a lot of stocks in Shanghai stock markets are plummeted, and all financial stocks, such as brokerage stocks and bank stocks are plummeted. The Shanghai Composite Index closing price decreased from 3376.495 points down to 3116.351 points, by 260.144 points, and fell 7.70%. The main reasons is that on last weekend China Securities Regulatory Commission announced the two financial inspection and punishing results: CITIC Securities, Haitong Securities, and Guotai Junan Securities are not allowed to open new credit accounts for three months, and a number of brokers have been criticized. In addition, at the same time Swiss central bank unexpectedly announced that CHF cancelled against the euro exchange rate cap, which make CHF rise and the euro exchange rate hit a new low. By the effect of this unexpected news and weaker economic data, the United States stock indexes decreased in the next five days. The resulting turmoil in the international financial markets are also affected to China stocks markets in some extent.

This paper does a study on 2014 Shanghai Composite Stock Price Index (SCSPI). In the process of model building, the original SCSPI data is found to be un-stationary, but the first order differencing data of original SCSPI data is stationary. By comparing with several models, ARIMA (1, 1, 1) is chosen as the final model and it succeeds in predicting three steps trends of SCSPI. Considering the fluctuations of SCSPI, this model can be applied in finance practices. The fluctuations of stocks are non-rational, and it is influenced by many factors. No model can include all these factors. Although the predicted values from the suggested model is a little different from actual value, the increasing trend is agreed in the 3 steps, which is enough for financial practice. That is because in the financial practice it is very perfect to make an investment to assure a coming profit.