). However new approaches are obtained for the estimation and variance of the dependent variable when these means are used as well as arithmetic population mean. In the application, the mean number of teaching staff of the departments in Ondokuz Mayıs University is estimated by auxiliary variable which is the number of students in the departments. In addition the variances of proportional estimation method are obtained and interpreted by using population arithmetic mean, geometric mean, harmonic and quadratic mean.

. However by using these means and under assumption

, new approaches are obtained for the estimation of the dependent variable and its variance. Geometric mean, harmonic mean and quadratic mean are investigated because the population mean is fixed. The aim is to minimize the variance for the estimators. In the application part the data is obtained from the departments of Ondokuz Mayıs University. The number of teaching staff at the departments are estimated via the number of student which is considered as the auxiliary variable. Some other means of the population also calculated and variances are calculated for the proportional estimation method approaches. There are several new estimators in the literature proposed for population mean and population sum derived from known proportional estimation. "Cochran (1977) investigated the use of information obtained from the auxiliary variable [1]."

Suppose that a sample with a size

is chosen out of a population

by random simple sampling method. It is assumed that for the values of y and x the change of the proportion

is very small and the correlation between the variables is denoted by a line passing from the origin point. Then the sample means of the variables are as follows:

The population means of the variables are:

then the proportional estimation of the population mean of variable

and proportion of the variables is

is given as follows

Substituting equation (7) in equation (5), we have

3. Proportional Estimator and New Estimators Proposed by Other Means

New estimators are given by using geometric mean, harmonic mean and quadratic mean instead of arithmetic population mean in equation (8) under condition

Definition 1. The geometric mean of a population is given as,

Replacing equation (10) instead of

in equation (8) we have following estimator

Expected value of this estimator is

and its variance is,

Definition 2. The harmonic mean of a population is given as,

Replacing equation (16) instead of

in equation (8) the estimator,

Expected value of this estimator is,

and its variance is obtained as,

Definition 3. The quadratic mean of a population is given as,

Replacing equation (22) instead of

in equation (8) the estimator,

Expected value of this estimator is,

and its variance is obtained as,

4.1. The Comparison of the Estimators

The following inequalities are given for the comparison of arithmetic mean against other means "Shahbazov, 2005, [8]" 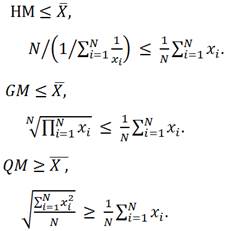 4.2. Comparison of the Means

4.3. The Comparison of the Variances

In equation (30) the inequality

is not a desirable situation therefore the estimator

is ignored. In this manner, using the following inequality

According to these results, if the population values of the auxiliary variable are known and positive then the estimators

can be proposed. An actual data application, presented in section 4, supports these results.

the sample equals to 14. Arithmetic mean, geometric mean and harmonic mean of the number of students are given in Table 1 respectively.

Table 1. The population means of the variable

Data of the chosen sample is obtained as in Table 2 by using random numbers table.

Table 2. Obtained values of the sample.

The estimated values and estimated variances of the proposed new estimators are calculated by Table 2 and given in Table 3.

Table 3. The estimators and numerical values of the variances.

In Table 3, we notice that the variances of estimators, obtained by using geometric and harmonic means, are smaller.