Despite the fact that solid waste management is a widely research subject area, solid waste still poses a big threat to human health and the environment, especially in the developing world [1-3]. In Dar es Salaam for example, only 40% of the 4,200 tons generated daily is collected [4] and the rest find their way into trenches or river valley or are dumped in open spaces or on the road side and when it rains they clog drainage systems leading to floods. Moreover, these places become breeding grounds for vectors associated with cholera, diarrhoea and malaria diseases and through percolation these wastes affect soil fauna and sauna and hence in some way reduce soil productivity. Several factors are said to contribute to the continued piling up of solid waste along the streets. The commonly cited reasons include poor technology, weak management structure, lack of resources and uncontrolled rural-urban migration [5-12].

In an attempt to tackle the problem, several researchers have used various mathematical techniques to model solid waste generation and treatment, transportation and even resources allocation. Examples include [13-18]. All these attempts were geared at establishing the relationship between solid waste generation and management with various factors, the major aim being the understanding of the intricacies involved in order to aid in solid waste management planning. According to [13] mathematical modelling provides an insight into a problem by establishing mathematical relationships among the variables and parameters involved. Using the deterministic compartmental model [13] modelled solid waste generation and treatment and concluded that solid waste generation is dependent on population growth rate and that as solid waste treatment effort is increased solid waste accumulation decreases. In that study, population was divided into three groups of young, adults and elderly and assumed that the groups generate waste at the same rate and have the same natural death rate. Population was considered to increase due to birth and migration while the net growth rate was the difference between the recruitment rate (birth and migration) and the natural death rate.

The assumptions that the groups have the same natural death rate and that they generate solid waste at the same rate were a serious shortfall as literature [14,19,20,21] indicates otherwise. This paper presents an improved version of the [13] model by assuming that each population group has its own solid generation rate and natural death rate.

for A3 and the death rates are

for age groups A1, A2 and A3 respectively. It is further assumed that the net population increase over a specific period of time is

and π1 is the proportion of

that falls in age group A1, π2 the proportion of

falling in age group A2 and

is the fraction of

that goes to age group A3. The survival rates for A1 and A2 are assumed to be s1 and s2 respectively.

The solid waste generated due to natural causes such as trees shedding leaves is termed K. Some effort E is required to keep the environment clean. The effort E here means any measures emanating from the authorities or the community to keep their environment clean and thus it includes efforts geared towards compositing, disposal, recycling or reuse; waste to energy conversion etc. Furthermore it is assumed that effort employed at a rate

and the solid waste natural decay rate is

. Some minimum quantity Qm of solid waste accumulated has to be allowed in the environment before the effort has to be applied. If once the effort is employed, it increases at the rate β as solid waste increases and that due to unavailability of resources effort may decrease at a rate γ then we have the model presented in Figure 1. 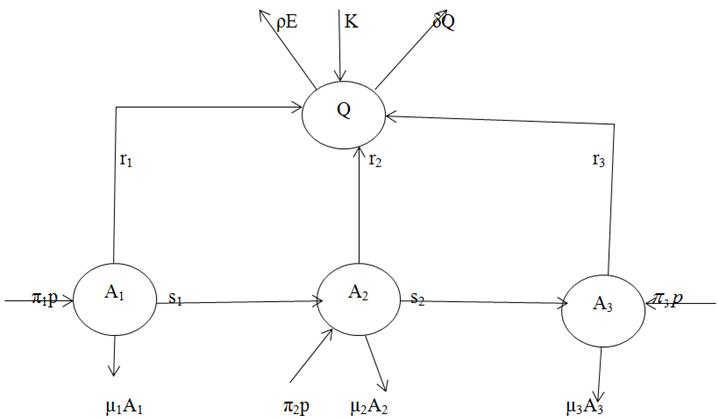 From the model in Figure 1, we have the following equations:

To find the equilibrium point we equate equations (1)-(5) to zero and solve. Therefore we have: 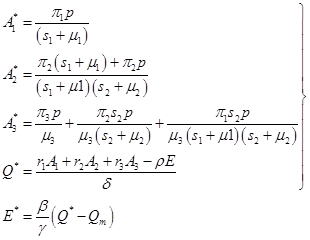 Thus, the endemic equilibrium point H1 is given by equation (6). This is the point at which solid waste will be scattered everywhere and causing menace to the people and environment.

We employ the Jacobean Matrix to calculate eigenvalues. The Jacobean matrix is given by:

For the solid waste endemic equilibrium

to be stable all eigenvalue of the Jacobean matrix must be strictly negative. Clearly the eigenvalues in (8) are all negative. In addition, the Routh-Hurwitz criterion in (10) confirms that the other two eigenvalues are negative. Hence the solid waste endemic equilibrium

However, we assumed that there is a threshold quantity Qm which is allowed by the authorities above which the effort E must be applied. This means that if Q<Qm,

That is, the region

is stable. This means that all solid wastes decay to zero and no treatment effort will be required.

Based on the 2012 population and housing census the projected population of Dar es Salaam 2014 gives the net migration rate as 2.43 for every one thousand (1000) individuals and the crude birth rate as 28.6 for every thousand(1000) people. Assuming the migrants are the adults and elderly, then the increase due to birth is approximately 0.03 for every individual. This means that

Different age groups generate waste at different rates [14, 19 and 21]. In a study that examined household behaviour under alternative pay-as –you-throw systems for solid waste disposal [24] observed that the amount of waste increased considerably with the number of small children and adults between the age group 25 to 64 years. According to [20] there is significant positive correlation of a high amount of original food within residual waste from households and a high proportion of persons aged between 20 and 59 on one hand and a less food wastage for people older than 50 years of age. Similarly, in their study to identify the parameters that explain the present situation and to assess the future amount of municipal solid waste generated per capita in different European cities [14] found out that a positive relationship existed between the percentage of the medium age group (15-59) and municipal solid waste generation. These conclusions are also supported by [21] whose study termed "A Situational Assessment of Socioeconomic Factors Affecting Solid Waste Generation and Composition in Freetown, Sierra Leone" concluded that as the average family age increases garbage generation decreases. Although these studies do not say exactly which population group generates waste at what rate, it is prudent to conclude that younger population groups generate waste at higher rates compared to the elderly. For the purpose of this work let’s assume that r1 = 0.45, r2 = 0.4 and r3 = 0.15.

According to [27] Tanzania’s overall under-five mortality rate is 0.1325 and the adult mortality rate age 15-60 years is 0.329 [27]. However, no available data on mortality rate for ages 5-14 and above sixty years of age. Therefore, the death rate

for ages 0-14 year’s old group is estimated based on the under-five mortality rate. Similarly, the death rate

for the elderly group (>60 years) is estimated based on life expectancy and the adult (15-60) mortality rate. Hence

The analysis of the Jacobean matrix in equation (5.7) show that all eigenvalues are negative and therefore solid waste endemic equilibrium is obtained at

then the solid waste free equilibrium can be obtained at

can and no effort will be required to manage the solid waste.

The numerical results of the model based on the various parameters embedded in the model system on the solid waste generation and treatment as the population grows confirm the analytical results. For numerical simulation, the following parameter values γ = 0.005; d = 0.05; r = 0.05; K = 1000; S1 =

Figure 2 shows the population dynamics within the community. Each group (young, adults and the elderly) will grow independent of the other until it reaches a stable state. Of course the growth id dependent on the initial population and the survival rate to the next group with time. An interpretation of this trend is that solid waste generation for each group will initially increase but as each group comes to a steady state the solid generation rate becomes constant. Figure 3 shows the effects of increasing treatment rate on the total solid waste generation. This is in agreement with what one would intuitively expect. Notably, as treatment rate increases the solid waste quantity decreases and eventually the two quantities intersect at a point and both reach a steady state.

Table 1. Summary and description of the parameters. 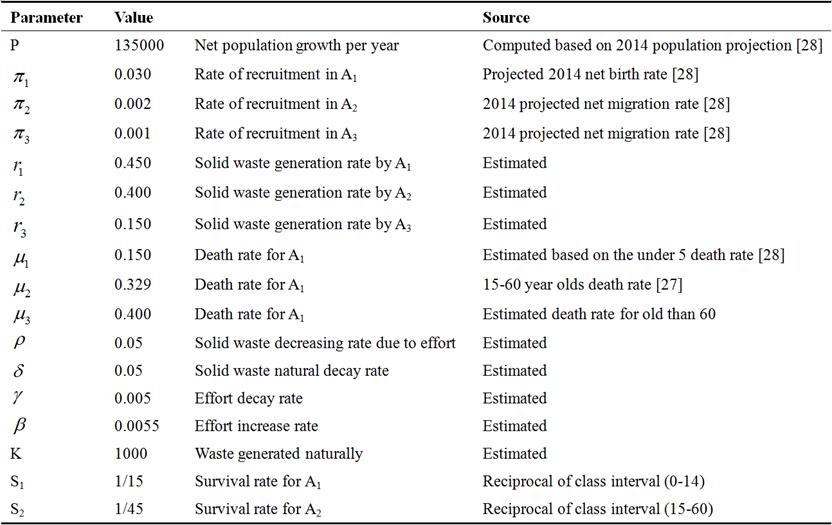 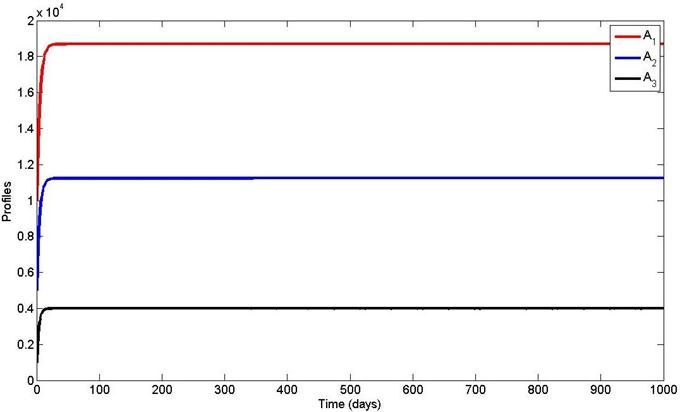 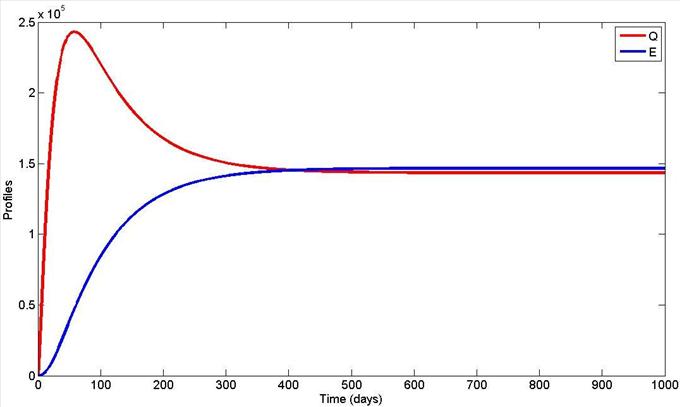 In essence, at this point solid waste accumulated equals treatment. This means that all solid waste generated is treated and solid waste free equilibrium is achieved. This confirms the analytical results. In this context treatment means all methods and techniques (landfilling, composting, recycling, reuse, waste to energy conversions etc.) geared towards ensuring that the community gets rid of the menace emanating from solid waste accumulation.

The from the numerical simulation as indicated in figure 2 and figure 3 are in agreement with the results shown in Table 2. The table provides sensitivity analysis of the solid waste quantity Q and the effort applied E. The table shows how the two quantities respond to a small change in each parameter.

Table 2 presents the effect of a small increase in each of the parameters on solid waste accumulation Q and the treatment effort E. The computed numerical values in the table are for parameters directly involved in computing Q* and E*, that is the values of Q and E at equilibrium point. They indicate the percentage changes in Q and E when there is an increase of 0.001 in each of the parameters. We note that such a small change in natural decay rate δ results in decrease of Q of about 30%. It is also observed that by increasing solid waste generation rates (r1, r2, r3) solid waste increases though by small percentages. On the other hand the small (0.001) increase in the effort growth rate increases the effort by about 286% which means that solid waste accumulation decreases by the same amount. However, that same increase in the effort decay rate γ decreases the effort by about 262%. Conversely, solid waste accumulation increases by the same percentage. The non-numerical effects in Table 2 are deduced intuitively from the effect the parameters involved will have on population growth and hence solid waste generation.