Abstract: This paper presents solution approaches for the multi-period multi-compartment Vehicle Routing Problem in fuel delivery. Multi-compartment vehicles are used for fuel distribution from one depot to a set of petrol stations that have deterministic fuel consumption of each hour. Due to the highly complicated assignment compartments of the same vehicle to petrol stations in full load distribution scheduling problem, a heuristic method will be adopted to solve this problem. By means of a case study, the heuristic developed is shown to be very effective in solving such comprehensive full load distribution scheduling problem for refined oil, and the results obtained are promising.

In this paper, taking the lowest cost of distribution as the goal to plan the delivery path of each vehicle that ensures each gas station is not out of stock in business hours. Vehicle load as an objective function for VRP has not received much attention. Most of the VRP studied in the literature are focus on the minimization distance [2]. Song and Kong (2012) studied the VRP routing selection based on time-varying network, which the shortest path doesn’t necessarily bring about last time [3]. Ghahremani-Gol, H. et al. (2016) proposed to minimum cost of total consumed energy of VRP in three dimensional space [4]. Nouveaux, FV and Salazar-Gonzalez. JJ (2016) considered the vehicle routing problem have as objective minimize a function of the acquisition cost and travelled distance, in which vehicle capacity can be selected [5]. Though load flow is considered in the objective function of a VRP, it is represented as a step function [6]. Luo et al. (2015) studied the multi-period VRP with time windows and limited visiting quota of different vehicles over the planning horizon [7]. Mildred V. et al. (2014) proposed a mixed integer programming model for a heuristic approach and without fleet size costs to solve the multi-product multi-period Inventory Routing Problem in fuel delivery [8]. Yang et al. (2015) proposed an environmental routing optimization problem with time windows and multiple vehicle types, in which the vehicle speed and load capacity affect the operation cost and environmental pollution [9]. Fernando B. O. et al. (2016) studied the multi-depot vehicle routing problem, which is decomposed into a single depot VRP and evolves independently in its domain space, to minimize the total route cost [10]. The vehicle routing problem, which involves assigning a fleet of multi-compartment limited capacity vehicles to serve a set of petrol stations without violating the capacity and full load constraints, has been increasingly discussed in practice recently.

In this paper, total vehicles cost, which is a function of total transportation without considering distance, is minimized. The novelty of this paper is to solve the vehicle routing problem with full-load limitation constraints on the multi-period delivery operation performance. Due to the highly complicated assignment compartments of the same vehicle to petrol stations in full load distribution scheduling problem, the problem cannot be solved analytically. Hence, a heuristic approach with fleet size costs is developed to solve the multi-compartment multi-period Vehicle Routing Problem in fuel delivery.

stations in a city which selling the same kind of oil products from the same oil depot. The effective volume of every gas station is

. Take no consideration of the loading and unloading time of delivery vehicles at the depot or the gas station. Assume that per hour sales of each gas station during business hours are constant

• Several definitions are given as follows:

Time Window: the current time for the earliest time points

. So the time window for delivery to the gas station is [

• The steps of heuristic algorithm:

Input: The effective volume of each gas station

, the amount of per hour sales of each gas station

, at the time of whole point, the initial physical inventory when

, the capacity of each vehicle

, single-trip costs for per vehicle; closing time of gas stations;

The departure time of vehicle k from the oil depot is

, the current position of vehicles are oil depot

, the initial time is

, the beginning of the business time for gas station is

; To determine whether the initial inventory of the various stations is greater than consumption per hour, and if so, at time

do not send any vehicles, go to step 1.

Step 1: In operating time, make a distribution plan for the time

. According to the physical inventory of gas stations at time t, calculate the follow-up time point set of gas station being not out of stock, to determine whether there is

of all gas stations, and if so, go to step2; otherwise, do not to send any vehicles; update the next time physical inventory of each gas station,

, do not send any vehicles, terminate the algorithm; otherwise,

Step 3: Calculate the amount of oil that can be accepted in the gas station and select the appropriate vehicles for distribution. According to the effective volume

and the current physical inventory

of the gas station, calculate the amount of reception

full-loaded, if so, give priority to choose another compartment of the double compartment vehicle to unload all refined oil of one compartment to this gas station; otherwise, go to Step 6.

Table 1. Main configurations of the computer.

The flow chart of heuristic algorithm is as follows: 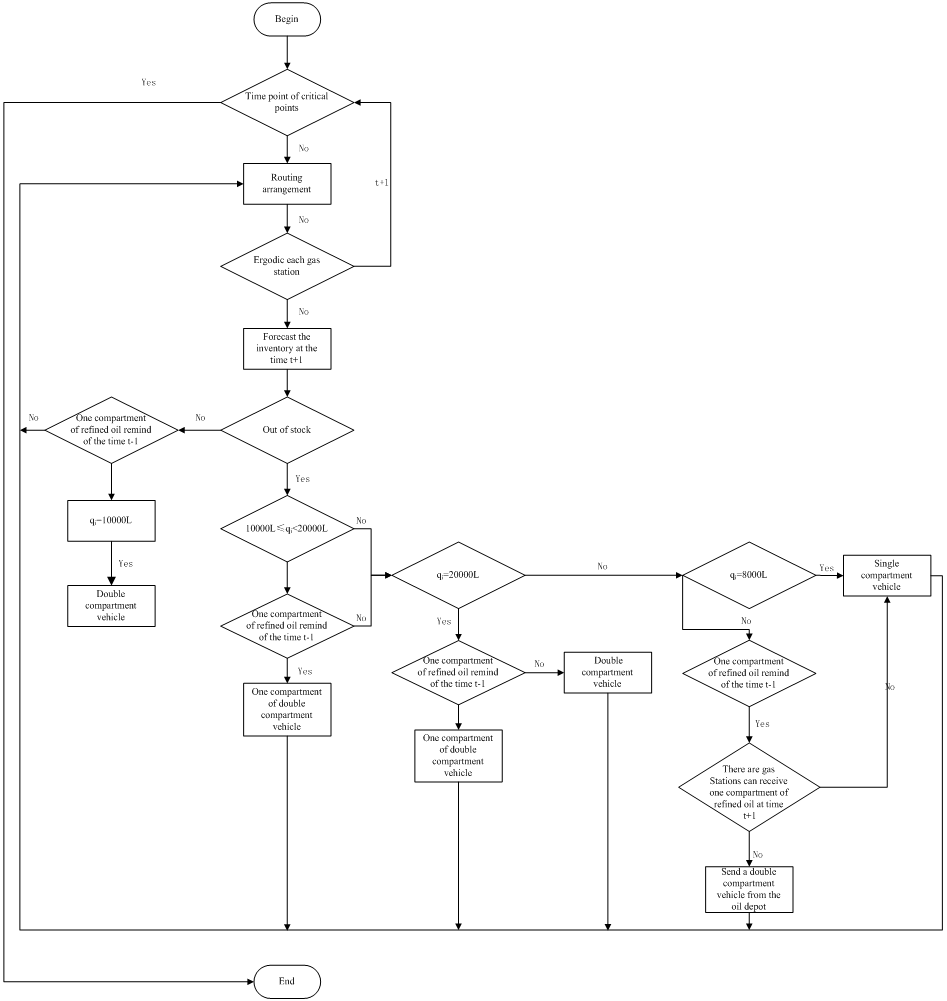 There are five stations in a city which selling the same kind of oil products from the same oil depot. The depot has two types of delivery vehicles which start working at 7:00 in the morning every day. Between the depot and various stations as well as each station that travelling time is 1h. The information of the gas station and an oil tank is shown in Table 2 the capacity information of each vehicle is shown in Table 3. Vehicles can unload oil from 8:00 to 22:00. Make a distribution program of the lowest distribution cost under each gas station is not out of stock.

The solving process of the heuristic algorithm is as follows:

Table 4. At 7 o'clock the situation of each gas station.

Table 5. At 9 o'clock the situation of each gas station.

Table 6. At 10 o'clock the situation of each gas station.

According to the criteria, the gas station S3 is a Must Distribution Point. At 11 o'clock gas station S3 can receive more than 10000L less than 20000 L refined oil and there is one compartment refined oil remained of the last time, so to unload refined oil of another compartment of the double compartment vehicle to S3 which come from S2, and update the physical inventory of the next time as usual and so on.

Table 7. The physical inventory of the whole point of each gas station.

Table 8. Distribution plan of the same day and distribution route of each delivery vehicle. 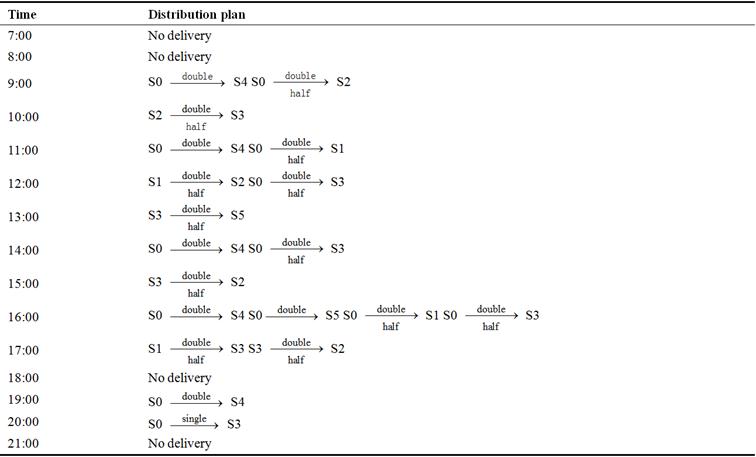 In this paper, we have developed an effective heuristic method to solve the full load distribution scheduling problem of refined oil. Due to the limitations of this paper, some factors such as multiple products, inventory cost, etc. are not considered. So considering these factors would help the multi-period multi-compartment Vehicle Routing decision made more realistically. In addition, the sales of per hour of each gas station are random in practical problems. So the actual demand of each gas station per hour is random. That means the gas station may be out of stock under the original distribution plan.

The inadequacies of this article lie in the problem is too much simplified, such as the assumption that the volume is constant, between each gas station and depot the travel time is 1 hour, check the inventory of each gas station and make delivery to each gas station only at the whole point. And use the heuristic algorithm to solve the problem without compared to other algorithms. There is no detailed analysis of the time complexity and space complexity. In a subsequent study, we will gradually remove various simplifying assumptions, model and algorithm will be designed more in line with the actual situation.