Abstract: Pain is a symptom that results from particular physiological processes as injurious stimuli characteristic of cell injury or disease. The use of plants as medicine for relieving pain has been reported in several studies where extracts have shown significant analgesic activity. This study was conducted to determine the analgesic efficacy of ethyl acetate and hexane crude extract from Euphorbia prostrata. The phytochemical screening of hexane and ethyl acetate was done. The study also evaluated the analgesic properties of hexane and ethyl acetate crude extracts from E. prostrata. Tail Immersion Model with albino rats was adopted for the investigation. Crude extracts at doses of 250, 500 and 1000mg/kg body weight were administered orally and their activity compared with diclofenac (positive control) and tween solution (negative control). Phytochemical screening showed that major phytochemical in E. prostrata plant had mid polar properties. Results for both the hexane and ethyl acetate crude extracts showed a significant increase in Pain Reaction Time (PRT) at the dose level of 1000 mg/kg. These results were statistically authentic as realized from minimal standard deviation of 0.158 and 0.058 for diclofenac and ethyl acetate extract respectively with a t-test value of 24.99at α = 0.005 level of significance. This confirmed the efficacy of both hexane and ethyl acetate extracts therefore inference that E. prostrata exhibits analgesic activity and is a potential lead candidate for drug discovery.

Plants have been used to treat diseases since time in memorial [16]. The oldest recorded evidence of medicinal plants’ use for preparation of drugs was found on a Sumerian clay slab from Nagpur, approximately 5000 years old [15,19]. While the people in the past used medicinal plants primarily as simple pharmaceutical forms, the demand for compound drugs has constantly increased as years went by due to the rise in demand for chemical diversity in screening programs that seek therapeutic drugs from natural products [32]. According to World Health Organization (WHO), 80% of people in the world currently rely on herbs as their primary source of healthcare and to generate income and livelihood improvement [29]. This is because herbs are considered to be accessible, safer and affordable compared to Gilani the synthesized products which are regarded to have adverse side effects to humans, environment and are believed to be safe to handle [12] [21]. Medicinal plants have played a key-role in drug discovery [2]. Apart from being a start-up in drug discovery, medicinal plants have found use in folk medicine to treat diseases and as a source of income [4].

Pain is associated with many medical conditions and pain control is among important therapeutic priorities [17]. It is mostly a warning signal that causes discomfort which leads to many adverse side effects [33]. The use of plants as medicine for relieving pain has been reported in many studies [7], [19], [35], [30], and some researchers have identified a number of plants whose extracts have shown analgesic activity [5], [17]. Many phytochemicals from plants have been found to provide analgesic solutions which are safe and broadly effective with fewer side effects [4], [32].

Euphorbia prostrata is a prostrate annual herb with the stems flattened and purberulous or pubescent above, and glabrous beneath, extending to 30 cm, not exceeding 20 cm in length [9]. Various parts of the plant have been used to treat different ailments like hemorrhoids [23], bloody dysentery, asthma, diabetes mellitus [14]. A few compounds have been identified from E. prostrata and these include; 6- methoxyquercetin-glycoside, quercetin, luteolin, apigenin and glycosides of luteolin [36]. E. prostrata plant belongs to Euphorbiaceae family which studies have revealed that it is being used worldwide for medicinal purposes [8]. The use of E. prostrata is due to bioactive compounds which have help in treating diseases like diabetes mellitus, dysentery, asthma [14] and early grades of hemorrhoids [23]. Earlier studies have shown that some of the plants belonging to Euphorbiaceae family have exhibited analgesic activities [37], [6]. This study therefore investigated the analgesic properties of crude extract from E. prostrata.

Fresh leaves of E. prostrata were collected from Kipkorgot area along Eldoret - Ravine Road at: 0° 31’ 0" North, 35° 17’ 0" East, within Uasin-Gishu County. The collected leaves were identified at the herbarium, Department of Botany, School of Biological and Physical Sciences, Moi University.

The collected leaves were washed and weighed before air drying under shade for 8 weeks after which they were ground into fine powder. Up to 3kg of the powdered sample was soaked in hexane and ethyl acetate solvents each for 48 hour. It was then filtered with cotton wool then followed by Whatman filter paper and concentrated under vacuum by use of rotary evaporator to yield the respective crude extract.

Tannins: 2g of extract was mixed with water, heated on water bath and filtered. Thereafter, a few drops of ferric chloride solution were added to the filtrate. Dark green colour indicated presence tannins.

Anthraquinones: 1g of each extract was boiled with 10% HCl for a few minutes on water bath. It was then filtered and allowed to cool. CHCl3 of equal volume was added to the filtrate. Few drops of 10% ammonia was added to the mixture and heated. Rose- pink colour formation indicates the presence of anthraquinones.

Steroids: 2ml of acetic anhydride was added to 1g of each extract and followed by 2ml of Suphuric acid (H2SO4). Change of colour from violet to blue or green or red, indicates the presence of steroids.

Terpenoids. (Salkowishki Test): 0.5g of the extracts was mixed with 2ml of Chloroform (CHCl3) and 3ml of concentrated sulphuric acid 6M was added. A layer was formed. An interface which is reddish in colour indicated the presence of Terpenoids.

Diterpenes: 2g of extract was dissolved in water then 3-4 drops of copper acetate (Cu (CH3COO)2) solution was added. Change of colour from blue to emerald green indicated the presence of Diterpenes.

Alkaloids: Alkaloids were tested by warming 2g of each crude extracts with 2 % H2SO4 for 2-3 minutes. It was then filtered and two drops Dragendrof’s reagent was added. Formation of orange precipitate indicated the presence of alkaloids (Muhammad et al., 2012).

25 albino rats of either sex that weighed 150-250g were obtained from University of Eldoret animal house after which the animals were kept in cages and maintained at 25±1oC. They continued to receive normal pellets for two days after which they were starved overnight (12hrs) and given clean water just before the experiment [13], [18].

Tail Immersion Model was used for bioassay [24] with a few modifications. Twenty five (25) albino rats were randomly divided into five groups with three rats each. The reaction time was determined before and after oral administration of the control drug and the test drug periodically. The animals were treated with 10ml/kg tween 20 solution for group A (negative control), 400 mg/kg of Diclofenac for group B (positive control) and 250, 500, 1000 mg/kg of E. prostrata extract for groups C, D and E respectively. About 5 cm of the tail of each of the rat was dipped into a water bath containing warm water maintained at a temperature between 50 and 55±10C and the time taken for the rat to flick its tail or withdraw it from the warm water known as the pain reaction time (PRT) was recorded for all the rats at intervals of 30 minutes up to 180 minutes. The cutoff reaction time was fixed at 15 second to avoid tissue damage.

The observations were expressed as mean ±standard deviation and the difference in response to test drugs were determined by student t - test where P< 0.05 was considered significant.

Results of solvent extraction in the form of percentage yield indicated that the production of the two solvents were not equal. 1.0331% and 5.80% were extracted from hexane and ethyl acetate respectively which are shown in Table 1.

The phytochemical screening of hexane and Ethyl acetate extracts are listed in Table 2.

An assay was done for the different concentrations of the E. prostrata crude extract obtained from hexane solvent. The results are recorded in table 1 below:

Table 2. The phytochemical screening of hexane and ethyl acetate extracts.

Table 3. Mean response time for the five treatments of the rats with hexane crude extract.

To determine the trend of response, a graph was drawn for each treatment. Figures 1 to 3 shows graphs for each of the five treatments.

A second assay was done for the different concentrations of the E. prostrata crude extract obtained from ethyl acetate solvent. The results are recorded in table 4 below.

Table 4. Mean response time for the five treatments of the rats with ethyl acetate crude extract. 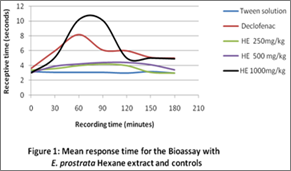 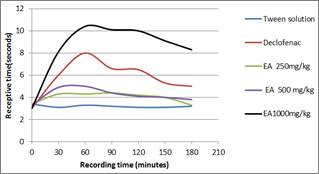 From Figure 3 above, it was apparent that Ethyl acetate extract with the concentration, 1000mg/kg had a significant prolonged analgesic effect i.e. from 25 minutes after oral administration it had a receptive time above 8 seconds for over 150 minutes as compared with the rest. Although Hexane extract of the concentration, 1000mg/kg showed the highest peak value at 75 minutes after oral administration its receptive time dropped immediately after maintaining receptive time above 8 seconds for 50 minutes. 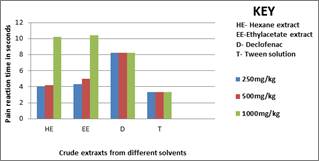 Euphorbia prostrata is a prostrate herb widely distributed globally. Different parts of the plant have been used by herbalist and it has been reported to have pharmacological properties. After serial extraction of hexane and ethyl acetate respectively, the % yield of the extracts showed that ethyl acetate was higher compared to hexane extract as shown in Table 1.The present phytochemical screening of hexane and ethyl acetate crude extracts indicated that the plant extract obtained in ethyl acetate has more compounds compared to hexane extract. The crude extract of hexane was found to be positive for diterpenes and flavanoids while ethyl acetate was found positive for alkaloid, diterpenes, flavanoids, steroids, tannins and terpenes. However, anthraquinones was found to be negative in both extracts. Most secondary metabolites present in E. prostrata are of mid-polar and non-polar compounds.

This study investigated the reasons behind the use of E. prostrata by herbalist in managing pain among other ailments. Pain can be generated when electrical, thermal, mechanical and chemical stimuli pass a certain threshold value leading to a release of certain chemicals like Braddykinin, histamines and prostaglandins that sensitize noniceptor by causing impulses sending it to spinal-cord. Transduction signal that comes to post central gyrus in thalamus is responsible for the conscious perception of pain and this is referred to as central sensitization [28]. The procedure in the tail immersion test was based on the fact that analgesic drugs selectively prolongs the reaction time of the typical tail withdrawal reflex in rats since they are very sensitive to temperatures between 50 and 55 ± 1oC. In this model, increase in pain reaction time (PRT) indicated the level of analgesia of the extract.

Further work to be done to identify individual compound(s) and test their individual efficacy. There is need to perform toxicity test, along with physiological parameters like body temperature, pulse rate/heart rate, respiration rate, changes in defecation and urination frequency and feeding behaviour in order to asses any side effects associated with this particular plant. Other models for analgesics should be tested to establish other routes of mechanism of action. We are currently working on these and results will be reported in due course.

The authors are thankful to the authorities of Moi University and University of Eldoret for providing necessary facilities to carry out this work.