Abstract: A novel oil highly absorptive resin was prepared by a suspension polymerization using 1-butyl -3- (2- methacryl) ethyl imidazolium hexafluorophosphate (BMIm)PF6-, methyl methacrylate (MMA), and butylacrylate (BA) as monomers, azobisisobutyronitrile as initiator, N, N methylenebis (acryl amide) (MBA) as crosslinking agent and polyvinyl alcohol (PVA) as dispersant and characterized by Fourier-transform infrared (FT-IR) spectroscopy, thermal gravimetric analysis (TGA), and scanning electron microscopy (SEM). The effects of different polymerization technological parameters, such as the mass ratios of the monomers, the addition amounts of the initiator, the cross-linker and the dispersant, the polymerization temperature and time, on the oil absorbency of the high oil absorption resin P (BMIm-MMA-BA) copolymer were examined in detail. Under the optimal condition, the oil absorbency was about 25.6 g/g for benzene, 22.6 g/g for xylene, 32.3g/g for chloroform, and 30 g/g for carbon tetrachloride, respectively. The kinetic investigation indicated the oil absorption obeyed the pseudo-first-order kinetic equation.

Environmental pollution is becoming more and more serious at present; in particular, deterioration of water quality of ocean, river and lake polluted by oil and oil-like organic solvents is one of the most calamities for human, animal, halobios, and plant. Various materials, including natural absorbents and synthesized polymeric materials, have been developed to deal with oil pollution hazards and recover the spilled oils [1-7], and oil-absorbing resin have been used widely to absorb oil spilled on water. High oil-absorption resin, different from ordinary oil-absorbing materials, is a new self-swelling oil-absorbing material with many virtues of absorbing large quantity and variety of oils, only absorbing oil from oil/water mixture and high capacity for oil retention, and has a promising future. Synthesis and applications of high oil-absorption resins have very important practical significance for environment protection [8].

Copolymerization of acrylic derivatives can be employed to prepare high oil absorption resins by various methods such as emulsion polymerization and suspension polymerization. However, the resins obtained by the above methods universally have some defects of compact structure [14-17].It is very important to select suitable monomers so as to introduce appropriate functional groups improving oil sorption for synthesizing high-oil-absorption resins.

Room temperature ionic liquids (ILs) are desirable green solvents for a wide range of separation and reaction media applications and they have good affinity to various organic compounds [18]. Interestingly, poly (ionic liquid) could retain partially or completely the intrinsic performances of the ionic liquid monomers [19,20].

In this study, we used the ionic liquid as monomer to obtain a high-oil-absorption resin of ternary copolymerized network polyacrylate BIMm-MMA-BA by a suspension polymerization. The removal performance of the prepared high oil absorption to several organic compounds (oil contaminations) was examined and the influencing factors on the oil absorbency of the high-oil-absorption resin were studied in detail including the monomers mass ratio, water/oil mass ratio, amounts of the cross-linking agent and initiator, type and amount of dispersing agent, and polymerization temperature. 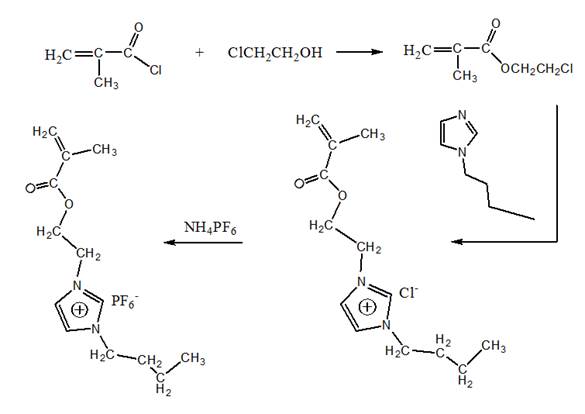 A typical synthesis procedure is as follows: 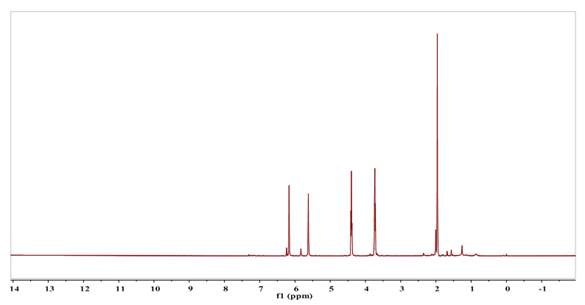 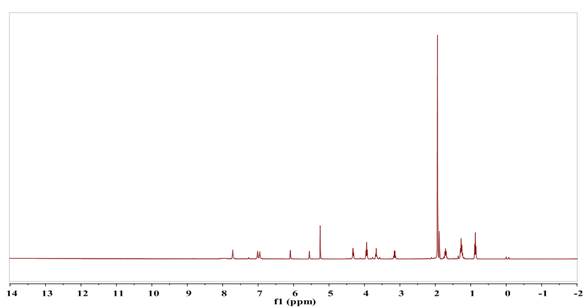 Copolymerization of BMIm, MMA and BA was carried out in a 250-ml three-necked flask equipped with a stirrer, condenser. 1.5ml of 0.8% PVA, 0.03 g of MBA, 7 mL of MMA, 10 mL of BA, 3mL of BMIm, deionized water and 0.5g of AIBN were added in the order. Then, the mixture was stirred at 30°C for 30 min to disperse homogeneously, while nitrogen was also bubbled to remove oxygen. After rising the temperature of oil bath to 90°C to react for 2h under N2 atmosphere, the reaction finished. The product was cooled, washed with hot water of 60°C, extracted with THF for 24 h in Soxhlet extractor and then dried under vacuum at 60°C until a constant weight. Obtained product was named as BMIm- MMA- BA high oil absorption.

The attenuated total reflectance Fourier transform infrared (ATR FT-IR) spectra were collected by using a Nicolet NEXUS 670 FT-IR single-beam spectrometer (USA) with a 4 cm-1 resolution and a 45°C angle maintaining constant contact pressure between the Ge crystal and the specimens.

Thermal stability measurements were performed on a Metter Toledo TG apparatus (Switzerland) from 30 to 800°C, with a heating rate of 10°C/min under a nitrogen flow rate of 50 mL/min.

The morphological analyses were carried out through a scanning electron microscopy (SEM) (JSM-5600LV, Japan), using an applied voltage of 20 kV. Before SEM observation, all samples were fixed on copper stubs and coated with gold.

3.1. Optimization of the Polymerization Conditions

3.1.2. Effect of the Amount of Crosslinking Agent on Oil Absorbency 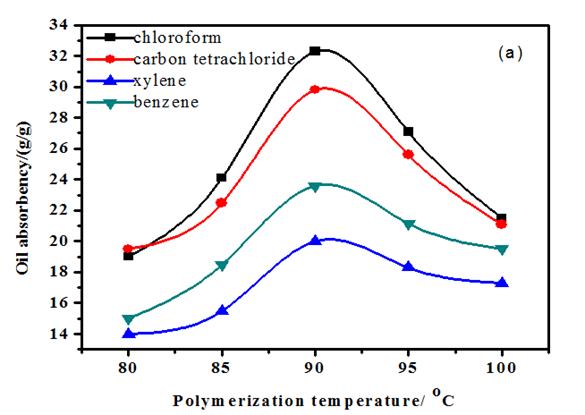 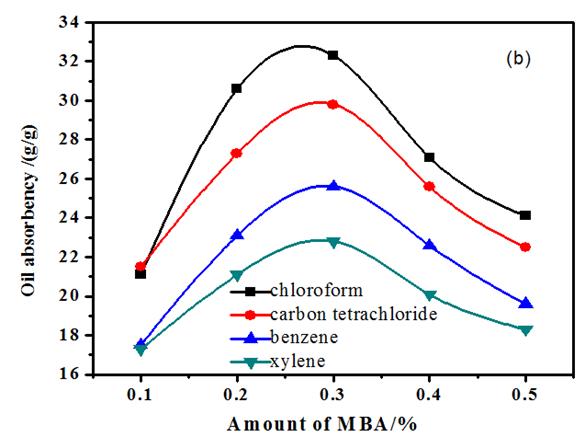 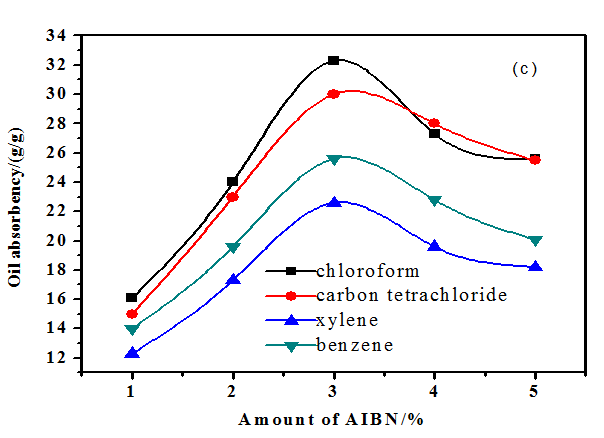 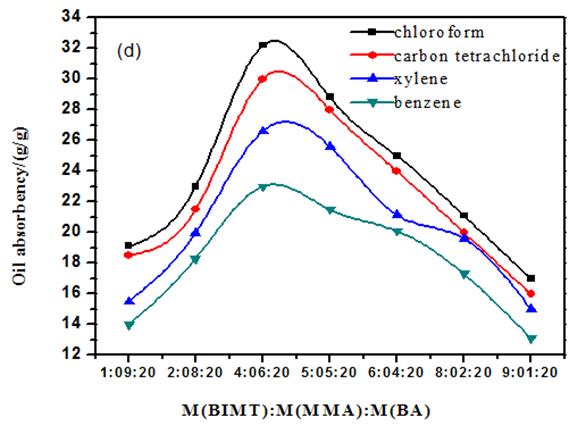 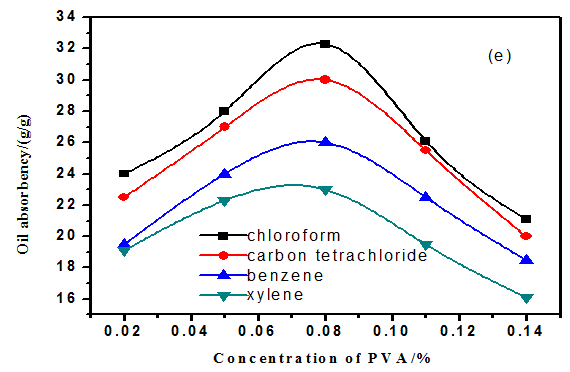 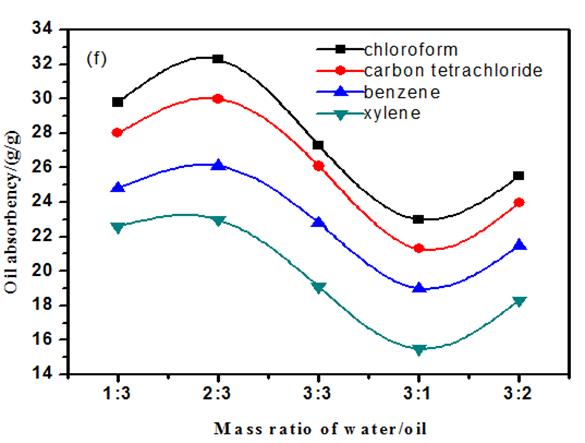 Fig. 3. Effects of the polymerization conditions.

3.1.3. Effect of the Amount of Initiator on the Oil Absorbency

Fig.3 (c) shows the changes of the oil absorbency depending on the different amounts of initiator. With increasing AIBN concentration, the oil absorbency at first increased and then decreased. It was apparent that the oil absorbency reached the highest when the amount of initiator was 3wt %. In the reaction system, the concentration of the initiator remarkably in fluencies on the reaction rate, the molecular weight of the resins and the crosslinking degree. Appropriate amount of the initiator can enhance polymerization speed, but more initiator will generate more active centers in order to increase the conversion and the gel fraction and decrease the length of the basic chain in polymer systems. As a result, the chain length between crosslinking points of the network decrease and the crosslink density increase with the increase of the initiator concentration. Therefore, the final result was a decrease of the oil absorbency. In practice, both growth and transfer of polymer chains should be considered simultaneously. When the polymerization temperature was 90°C and reaction time was 8h, 5wt% AIBN (based on the total monomer weight) was optimal.

3.1.4. Effect of the Monomer Feed Ratio on the Oil Absorbency

The sort and ratio of the monomers can affect the oil affinity of resulting resins and the effective network volume, which can further influence the oil absorption process [21]. In this chapter, a high oil-absorbing resin was prepared by a suspended polymerization with BMIm and MMA and BA as monomers. The influence of the BIMm to MMA and BA molar ratio on the oil absorbency of the crosslinking polymers was investigated. Fig. 3 (d) exhibits the relation between the monomer molar ratio and the oil absorption. It can be seen that with the amount of BMIm increasing, the oil absorbency of the resultant polymer resin increased until the mass ratio of BMIm to MMA reached 4:6. Maybe that is because the introduction of BMIm chain segment into the polymer increases the affinity of the resulting polymer to oil. But excess amount of BMIm would bring too many branched chains, which was disadvantageous for the formation of the proper network structure. When the polymerization was carried out at 90°C for 8h in the presence of 0.3wt% MBA, 5wt% AIBN and 0.08% PVA, the optimum BIMm: MMA: BA ratio was 4:6:20.

The dispersant used in the suspension polymerization has direct effects on the molecular weight of the resins. Just as shown in Fig. 3 (e), when the amount of dispersant used was low, the oil absorbency increased with its addition amount increasing, but the addition exceeded the critical amount of 0.08%, the oil absorbency started to decrease. That is because when the concentration of PVA was too low, the product tended to form large particles and hardly absorbed oil. However, because PVA could increase the viscosity of water, excess of PVA would cause a decrease of the resulting resin. Thereby, in this study, 0.08% of PVA was used as a suitable amount.

3.1.6. Effect of the Ratio of the Water/Oil on Oil Absorbency

Water, acting as a dispersed phase, was suspended in the continuous monomer phase in the suspension polymerization where the initiator, crosslinking agent, and monomers were an oil-soluble. When the amount of water was lower, with the water/oil mass ratio increasing, the oil absorbency increased, resulting from the increased availability of space of the oil-absorption resins. But the water/monomer mass ratio influenced the particle size of the polymer, so too much water would cause a decrease of oil absorbency. Fig. 3 (f) displayed the variation of the oil absorbency relative to different water/ monomer mass ratio. A suitable water/oil mass ratio of 2:3 was chosen in this work.

3.2. Characterization of the Oil Absorption Resin

FTIR spectrum of BMIm-MMA-BA copolymer was shown in Fig. 4 it could be seen that in the IR spectrum of the copolymer appeared characteristic peaks of ionic liquid segment. The absorption peak at 1638 cm-1was attributed to C= N stretching vibration and the absorption peak appearing at 849 cm-1 was assigned to the stretching vibration of PF6-, where as the frequency at 875 cm-1 was assigned to the P–F bond. 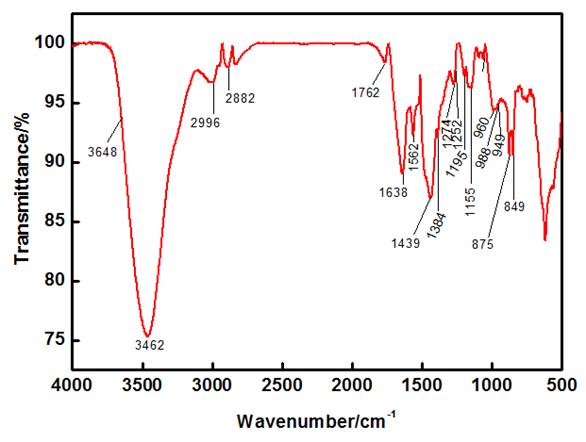 Fig. 4. ATP-FTIR spectra of the resin.

As we know, the morphology of a crosslinked resins will influence the rate of oil absorption [24]. Fig. 5 displays SEM microphotographs of the resin prepared by different polymerization. It was apparent that there were many large deep holes randomly distributed in the surface and inside of the resin. These holes would support large surfaces in the polymeric network.

The thermal stability is an important parameter to assess a material. Fig. 6 shows the thermogravimetric (TG) curve of the oil-absorptive resin. It could be seen that from the curve of (BMIm-MMA-BA) copolymer presented a little mass loss before 100°C possibly caused by evaporation of residual water in the resin. A rapid mass loss emerged after 302°C resulted from the break of resin chain and decomposition of alkyl acrylate. The sample mass loss was about 58.4% at 399°C. The results showed that the highly oil-absorptive resin had a good thermal stability. 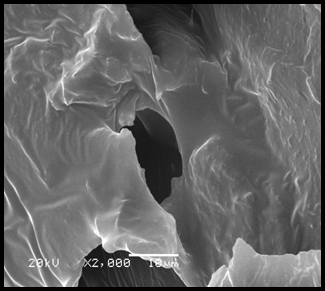 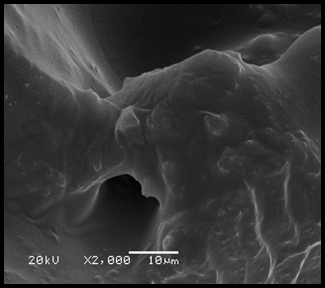 Fig. 5. SEM of the resin prepared by different polymerization. 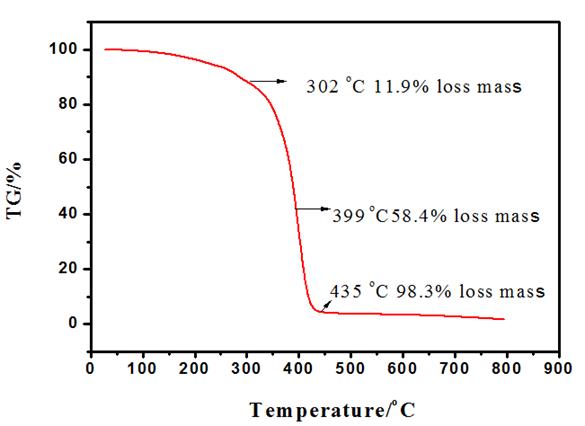 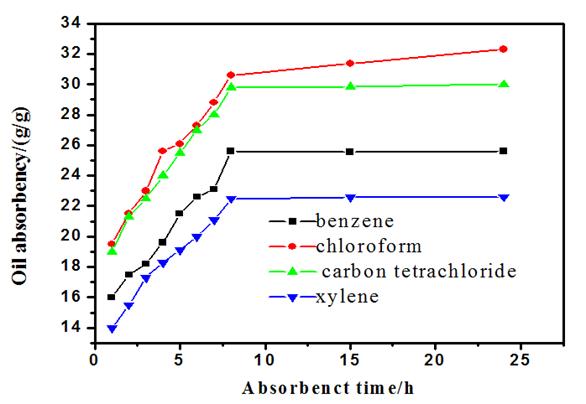 Fig. 7. Influence of absorption time on oil absorbency of the resin.

Xylene was chosen to study the oil-absorbing rate and absorption kinetics. It can be seen from Fig. 8 that the oil absorbency increased with increasing immersion time until the absorption rate reached saturation after 8h. According to Yao and Zhou [14], if oil absorption process obeys the first-order model, the swelling rate can be described by the following experimental formula:

Similarly, according to the second-order model: 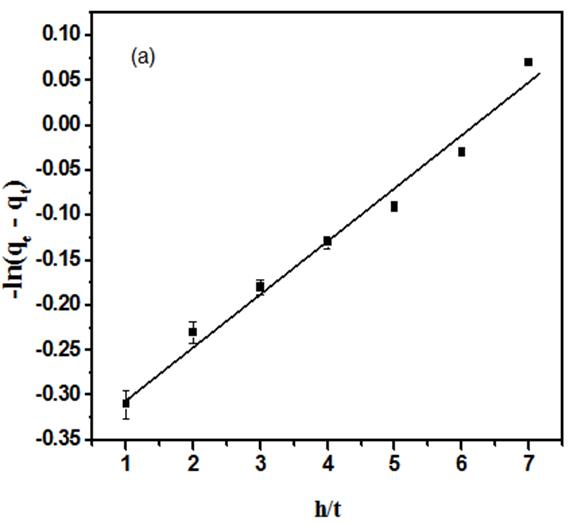 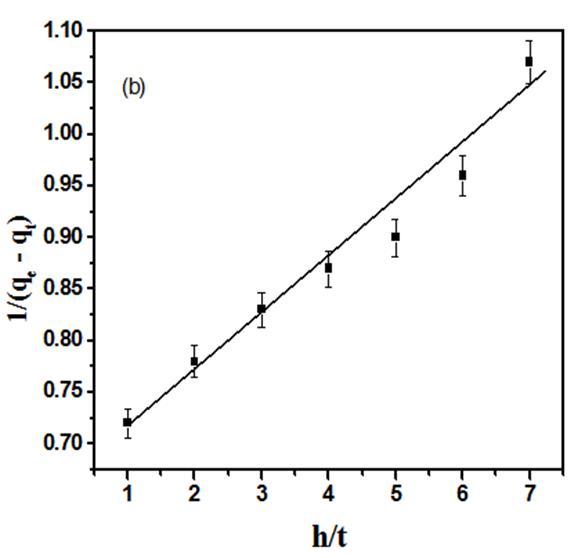 In this chapter, an ionic liquid enhanced high-oil-absorption resin of copolymerized (BMIm-MMA-BA) was prepared by suspension polymerization. The highest oil absorbency was about 25.6 g/g for benzene, 22.6 g/g for xylene, 32.3g/g for chloroform, and 30 g/g for carbon tetrachloride respectively under optimal conditions. And the oil absorption obeyed the pseudo-first-order kinetic equation.

This work was supported in part by the Key Project of Science and Technology of Education Ministry (00250), the Natural Science Foundation of Gansu Province (3ZS041-A25-028 and096RJ2A120), the Project of KJCXGC-01, NWNU, and Gansu Key Lab of Polymer Materials, China.